13 Delicious Fish Dishes That You Want To Eat Everytime 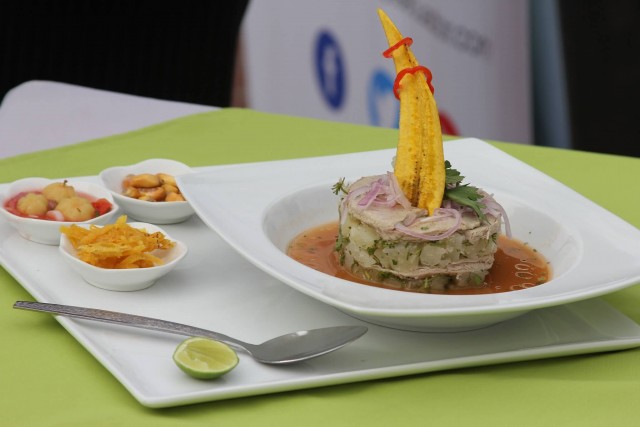 Encebollado (In Spanish: cooked with onions) is a fish stew from Ecuador, regarded as a national dish. It is served with boiled cassava and pickled red onion rings. A dressing of onion is prepared with fresh tomato and spices such as pepper or coriander leaves. 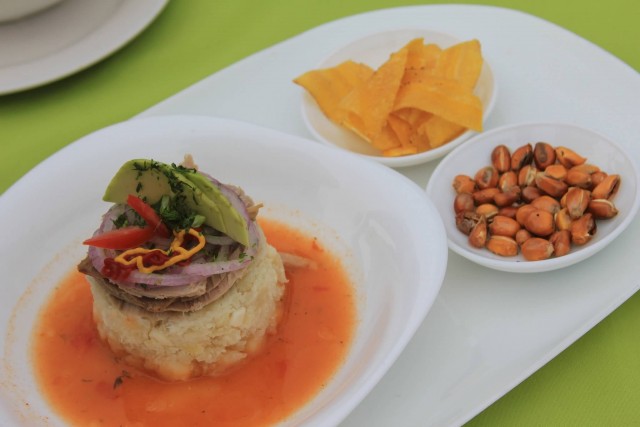 It is commonly prepared with albacore, but also tuna, billfish or bonito. It may be served with ripe avocado. This dish, is usually served with banana chips, plantains, popcorn or bread as side dishes. It is sold by peddlers either as breakfast, a mid-morning snack or for lunch. It may be garnished with lime juice and chili sauce. 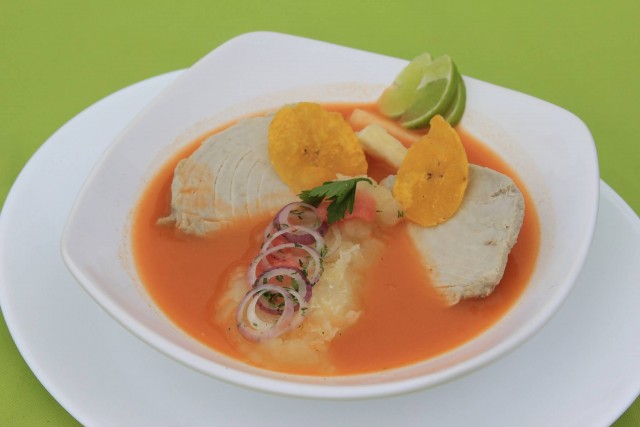 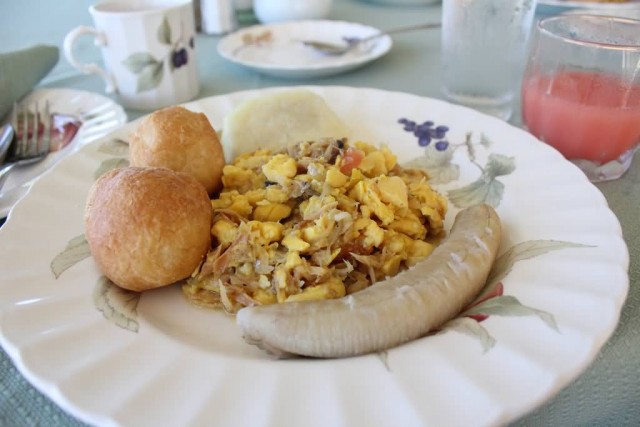 Ackee and saltfish is a traditional Caribbean dish. To prepare the dish, salt cod (salt fish should be soaked overnight to eliminate most of the salt) is sautéed with boiled ackee, onions, Scotch Bonnet peppers (optional), tomatoes and spices, such as black pepper and pimiento.

It can be garnished with bacon and tomatoes and is usually served as breakfast or dinner alongside breadfruit, hard dough bread, dumplings, fried plantain or boiled green bananas. Ackee and saltfish can also be eaten with rice and peas or plain white rice. When seasonings and saltfish are combined with plain rice it is often called seasoned rice which is a one pot meal that is usually eaten on Fridays as an inexpensive meal for dinner. 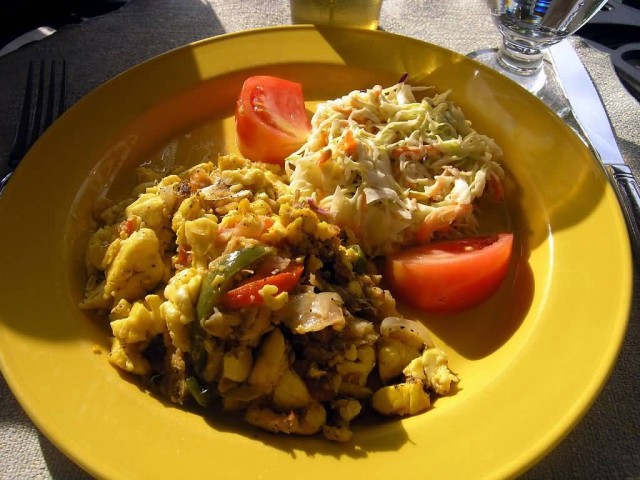 Caldillo de congrio (Spanish for conger stock) is a Chilean fish dish. The dish is made of congrio Colorado (red conger), an eel species common in the Chilean Sea. The dish is made by boiling together fish heads, onion, garlic, coriander, carrots and pepper. Once these are boiled, only the stock is used. Onion and garlic are fried together with chopped tomatoes. The vegetables are mixed then with the stock, cream, boiled potatoes and marinated and boiled conger. 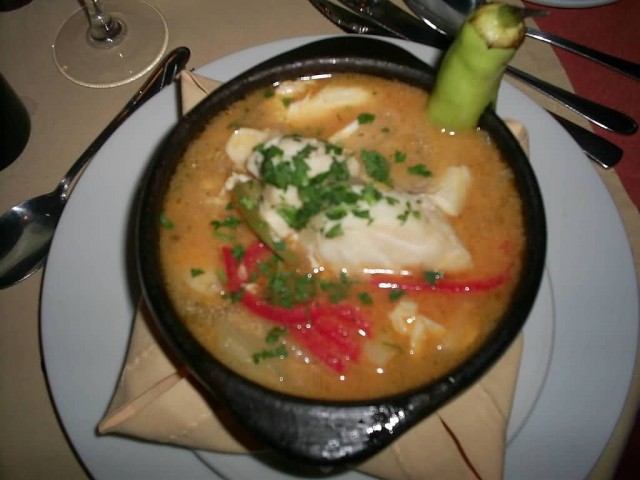 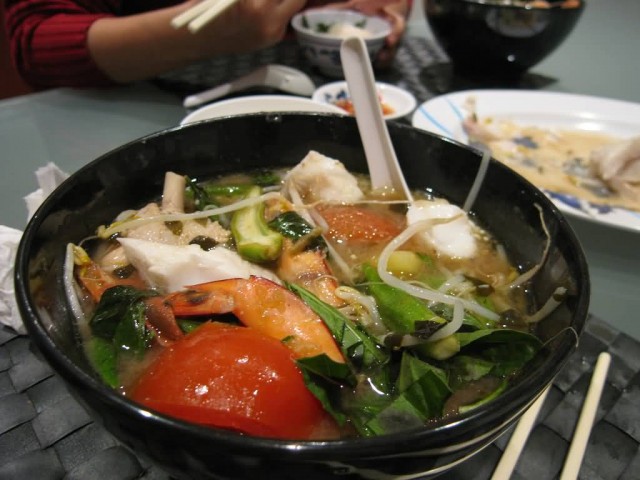 Canh chua or cooked fish is a sour soup indigenous to the Mekong Delta region of southern Vietnam. It is typically made with fish from the Mekong River Delta, pineapple, tomatoes and sometimes also other vegetables such as okra and bean sprouts, in a tamarind-flavored broth. It is garnished with the lemony-scented herb ngò ôm (Limnophila aromatica), caramelized garlic and chopped scallions, as well as other herbs, according to the specific variety of canh chua.

These other herbs may include rau răm (Vietnamese coriander), ngò gai (long coriander) and rau quế (Thai basil). It can be served alone, with white rice or with rice vermicelli. Variations can include prawns, squid, spare ribs, fish cakes and quail eggs. The sour taste of the soup comes from tamarind, which is mixed with a small amount of hot water. The mixture is then stirred for a few moments to release all the essence and the liquid is then added to the soup. When made in style of a hot pot, canh chua is called lẩu canh chua. 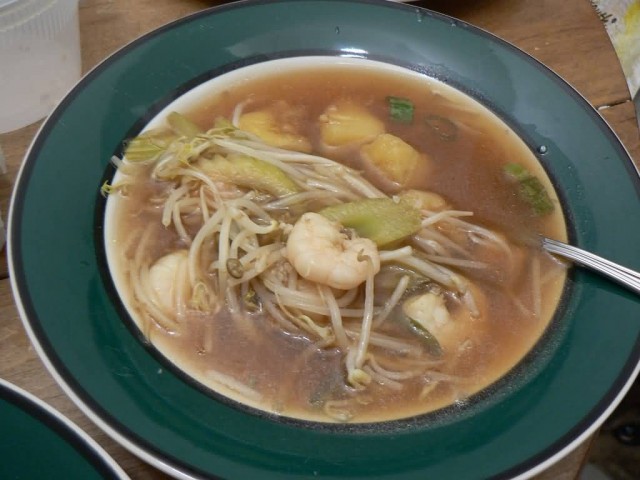 Asam Pedas is a Minangkabau sour and spicy stew dish. Besides being popular in Indonesia, it is also popular in Malaysia. The main ingredients in asam pedas are usually seafood or freshwater fish. They are cooked in asam (tamarind) fruit juice with chilli and different spices. The cooking process involves soaking the pulp of the tamarind fruit until it is soft and then squeezing out the juice for cooking the fish.

Asam paste may be substituted for convenience. Various vegetables such as brinjals (Indian eggplants), okra and tomatoes are added. Fish and seafood such as mackerel, red snapper, tuna, gourami, pangasius or cuttlefish, either whole body or sometimes only the fish heads are added to make a spicy and tart fish stew. It is important that the fish remain intact for serving so generally the fish is added last. Kaeng som is the Thai version of asam pedas. In Bengal, India there is a similar dish is called Macher tak (sour fish). 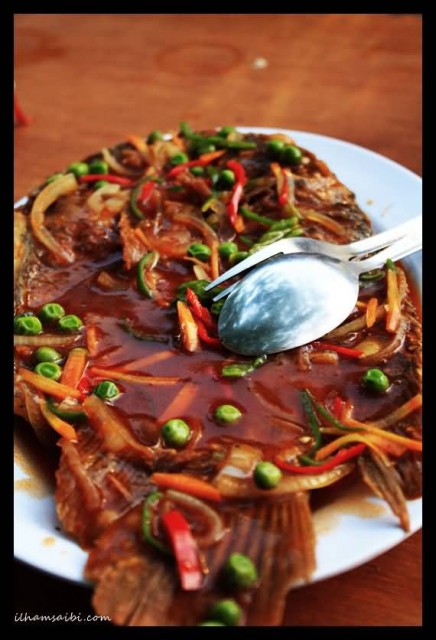 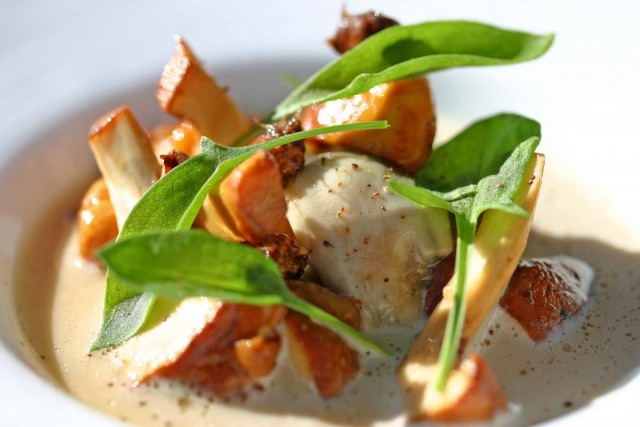 Escabeche is the name for a number of dishes in Mediterranean and Latin American cuisines which can refer to a dish of either poached or fried fish marinated in an acidic mixture before serving, the marinade or a marinated salad of various vegetables. The dish is common in Spain and its former colonies. It is well represented in Portugal and France. It is usually served cold after marinating in a refrigerator overnight or longer.

The acid in the marinade is usually vinegar, but can also include citrus juice. Escabeche is a popular presentation of canned or potted preserved fish, such as mackerel, tuna, bonito or sardines. The dish is also known as escoveitch or escoveech fish in Jamaicaand is marinated in a sauce of vinegar, onions, chayote, carrots and scotch bonnet peppers overnight, since it is a traditional breakfast dish. 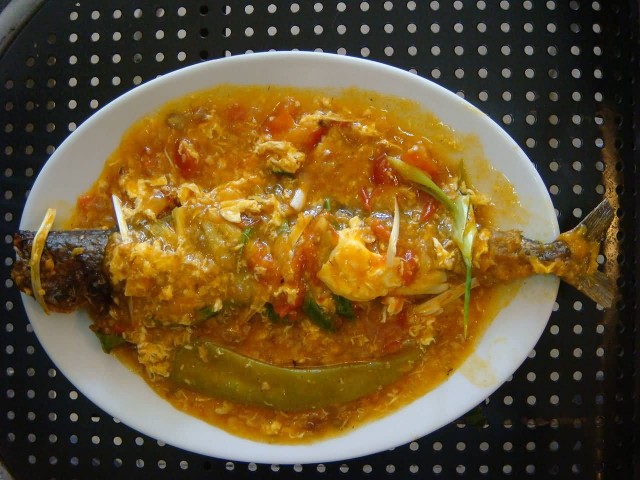 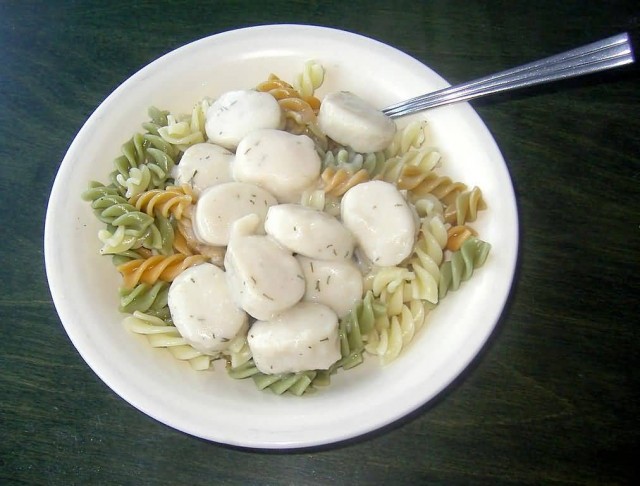 Fish balls are a common food in southern China and overseas Chinese communities made from “fish paste”. They are also common in Scandinavia, where they are usually made from cod or haddock. Smaller in size, made from cheaper fish than the white variety, they are usually sold at food stalls with five to seven balls on a bamboo skewer. The fish balls are usually boiled in a spicy curry sauce. Virtually every street stall creates its own recipe of curry satay sauce to differentiate them from other sellers. 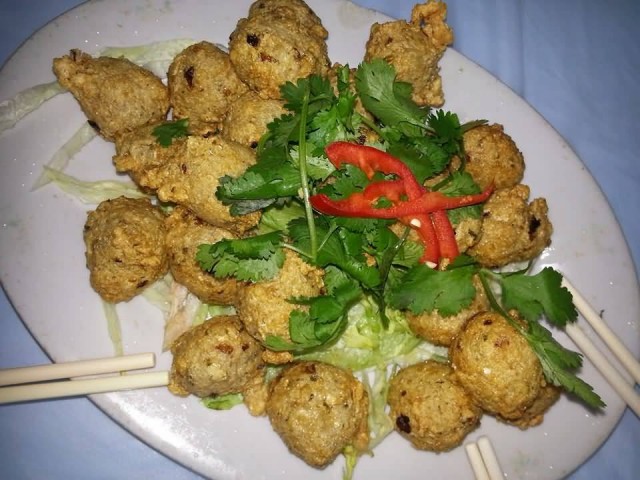 Fish balls are one of the city’s most popular and representative “street foods”. White fish balls are larger in size and made with only fish, no other ingredients are added and then boiled till done. As a result of this cooking method, these fish balls are white in color. They are made using a more costly fish and has a considerably different texture and taste. This kind is usually eaten as a compliment with noodles at Chiuchow-style noodle restaurants and at some cha chaan tengs, which also sell beef balls and cuttlefish balls. Fish balls are also a popular ingredient for hot pot. 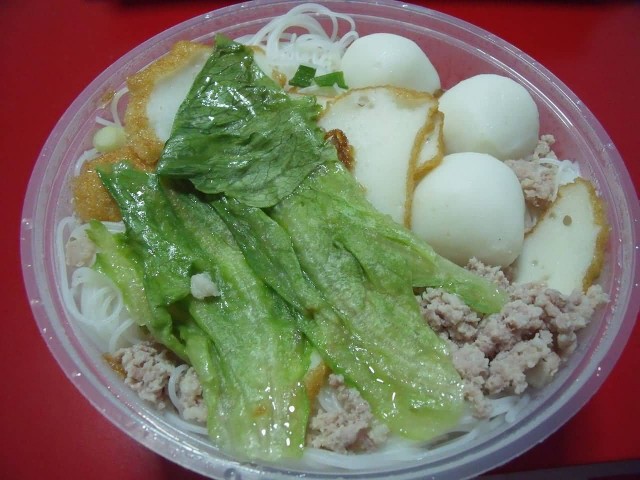 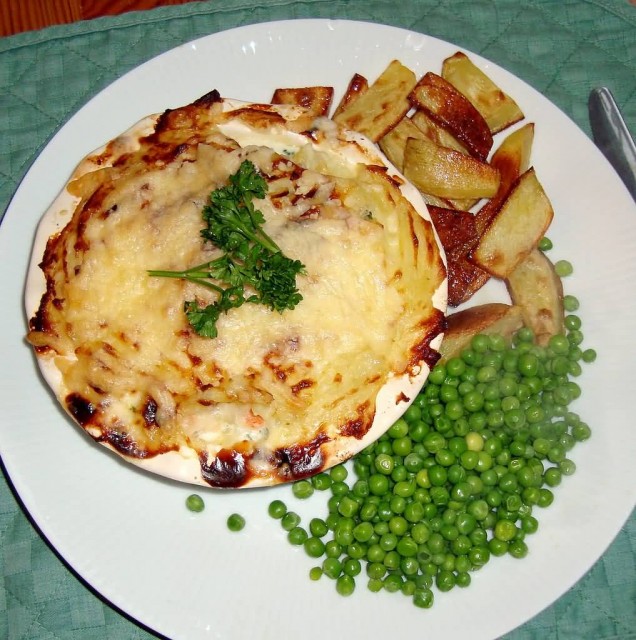 Fish pie is a traditional British dish. The pie is usually made with white, often smoked, fish in a white sauce or cheddar cheese sauce made using the milk the fish was poached in. Prawns and hard boiled eggs are other common additional ingredients. It is oven-baked in a deep dish but is not usually made with the shortcrust or puff pastry casing that is associated with most savoury pies. 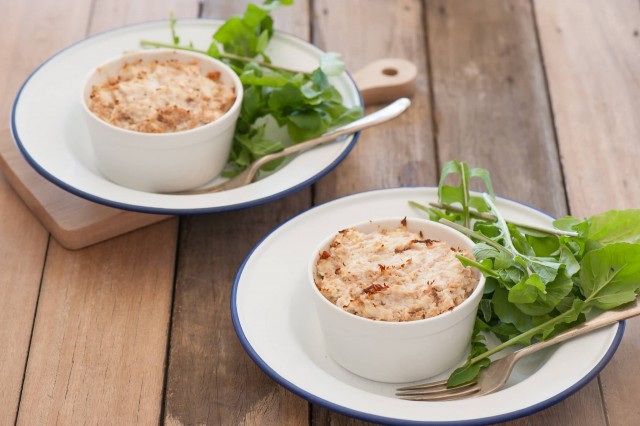 In place of a pastry casing enclosing the pie, a topping of mashed potatoes is used to enclose the contents during baking. The dish is sometimes referred to as “fisherman’s pie” because the topping is similar to that of shepherd’s pie, in that it uses mashed potatoes. 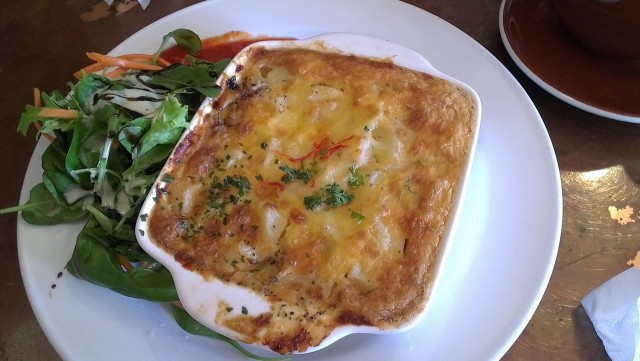 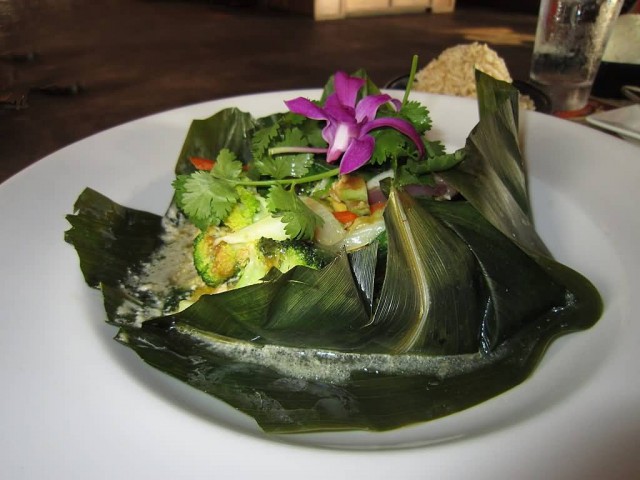 Laulau is a Native Hawaiian cuisine dish. The traditional preparation consisted of pork in wrapped taro leaf. In old Hawaii laulau was assembled by taking a few luau leaves and placing a few pieces of fish and pork in the center. In modern times, the dish uses taro leaves, salted butterfish and either pork, beef or chicken and is usually steamed on the stove.

Laulau is a typical plate lunch dish and is usually served with a side of rice and macaroni salad. In the classical preparation, the ends of the luau leaf are folded and wrapped again in the leaf. When ready, all the laulau is placed in an underground oven, called an imu. Hot rocks are placed on the dish and covered in banana leaves and buried again. A few hours later the laulau is ready to eat. 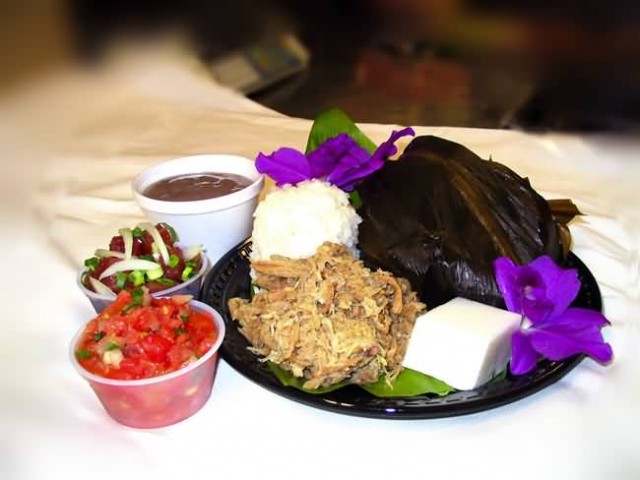 Pira caldo is a fish soup that is part of the traditional cuisine of Paraguay. The Guarani word Pira means “fish”. The soup is very high in calorie content and in protein. Traditionally the fish used for pira caldo and other ingredients include fat, onion, tomatoes, green or red bell peppers, parsley, pepper, spices and salt.

The pira caldo as most popularly prepared begins with frying the vegetables in a little beef or pork fat. Then boiled water and the fish are added with salt and spices. When the fish is cooked and the soup is thick, some chopped chili pepper is added.

As pira caldo is a widespread dish, there are a number of variations. One of them which constitutes a rich source of protein is prepared by running the cooked fish through a small mill. This method of preparation avoids the problem of small children choking on the bones. 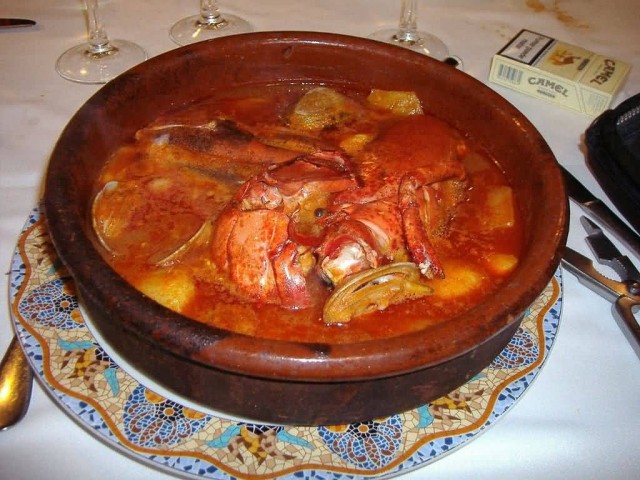 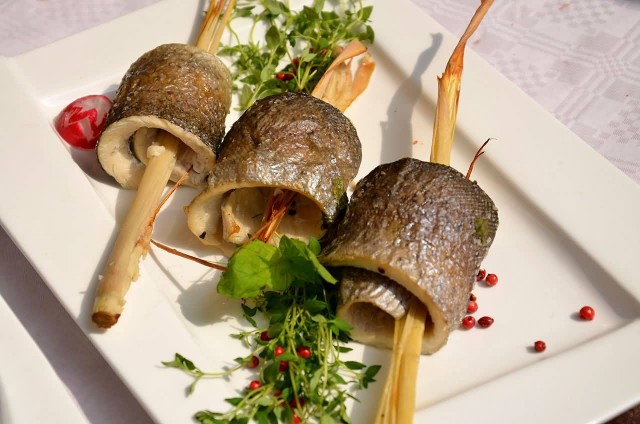 Rollmops are pickled herring fillets, rolled into a cylindrical shape, often around a savoury filling. The filling is usually slices of onion, pickled gherkin or green olive with pimento. Rollmops can be served held together with one or two small wooden skewers. Rollmops are usually bought ready-to-eat, in jars or tubs. The marinade additionally contains water, white vinegar and salt. It may also contain sugar or other sweetening agents, onion rings, peppercorns and mustard seeds. 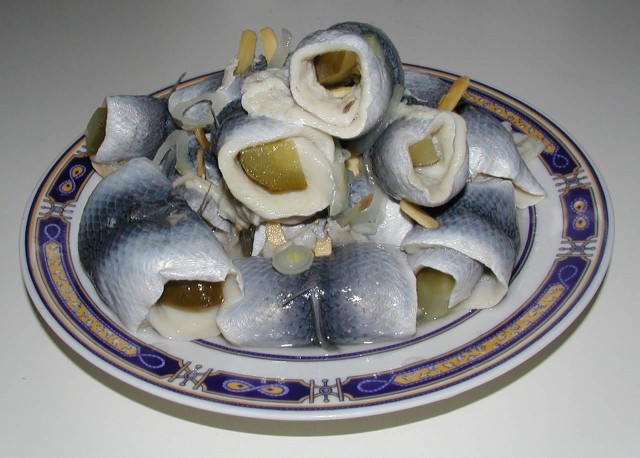 Rollmops can be eaten cold, without unrolling or on bread. After the jar has been opened, they will usually keep for two to three weeks if kept cool or refrigerated. Rollmops grew popular throughout Germany during the Biedermeier period of the early 19th century and were known as a particular specialty of Berlin, like the similar pickled herring dish Bismarckhering. 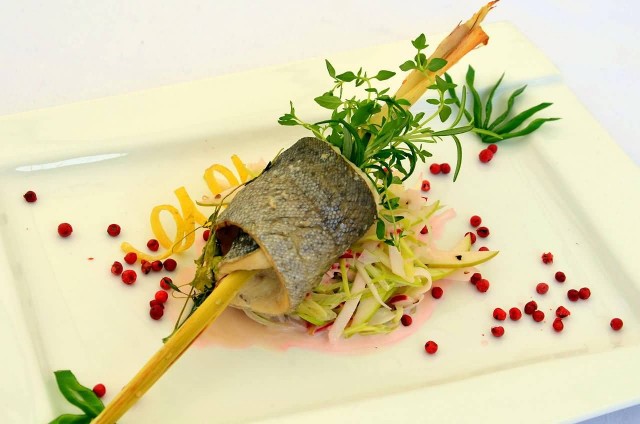 A quenelle is a mixture of creamed fish or meat, sometimes combined with breadcrumbs, with a light egg binding. It is usually poached. Formerly, quenelles were often used as a garnish in haute cuisine. Today, they are usually served on their own. The word quenelle is derived from the German Knödel (noodle or dumpling). Quenelle may also refer to a food item made into an oval or egg shape, such as ice cream, sorbet or mashed potato quenelles. This usage derives from the original shape of the egg-and-meat quenelle.

It can also be served vegetarian or “nature”. There are many ways to prepare quenelles de brochet, but most recipes first prepare a panade, essentially a white sauce, then combine the panade with fish and put the mixture through a sieve such as a tamis, yielding a forcemeat. The quenelles are shaped from the forcemeat and then poached. They may be served sauced and grilled or with a variety of sauces. 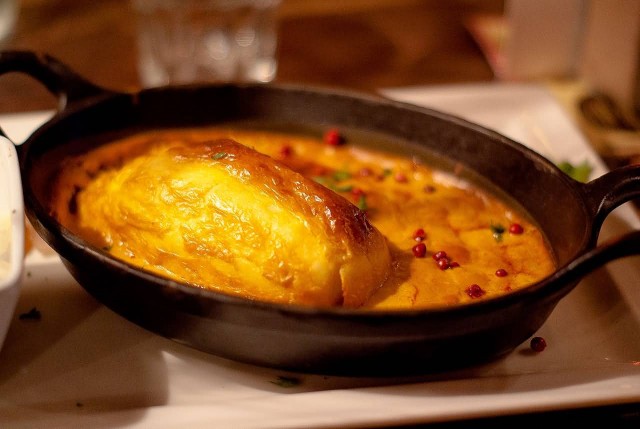 Ukha is a clear Russian soup, made from various types of fish such as bream, wels catfish or even ruffe. It usually contains root vegetables, parsley root, leek, potato, bay leaf, dill, tarragon and green parsley and is spiced with black pepper, saffron, nutmeg and fennel seed. Fish such as perch, tenches, sheatfish and burbot are sometimes used to add flavour to the soup. Vegetables were kept to a minimum when preparing ukha.

In fact, in classic Ukrainian cuisine, ukha was simply a rich fish broth that accompanied fish pies. These days it is more often a fish soup, cooked with potatoes and other vegetables. A wide variety of freshwater fish can be used and some aficionados opine that one cannot make a good ukha from saltwater fish species. Fresh fish lends the dish the best flavor and so if frozen fish is used, it is better not to defrost it. 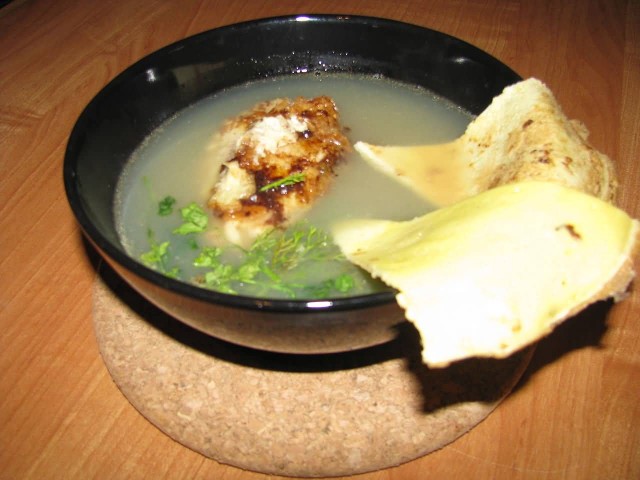