Top 10 Most Famous & Highest Bridges In The World 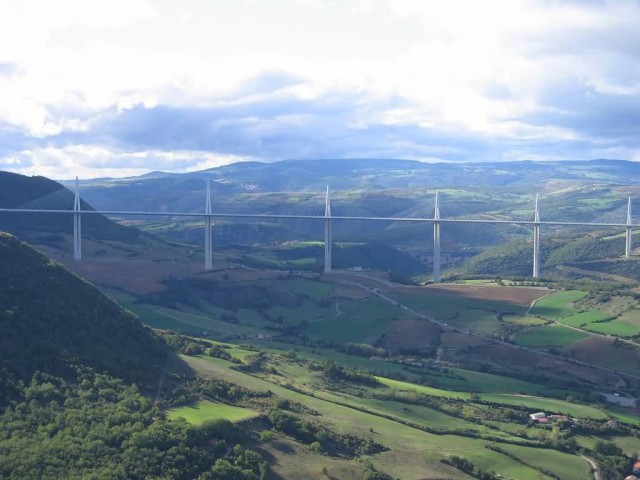 The Millau Viaduct is a cable-stayed bridge that spans the valley of the River Tarn near Millau in southern France. Designed by the French structural engineer Michel Virlogeux and British architect Norman Foster, it is the tallest bridge in the world with one mast’s summit at 343.0 metres above the base of the structure. It is the 12th highest bridge deck in the world, being 270 metres between the road deck and the ground below. 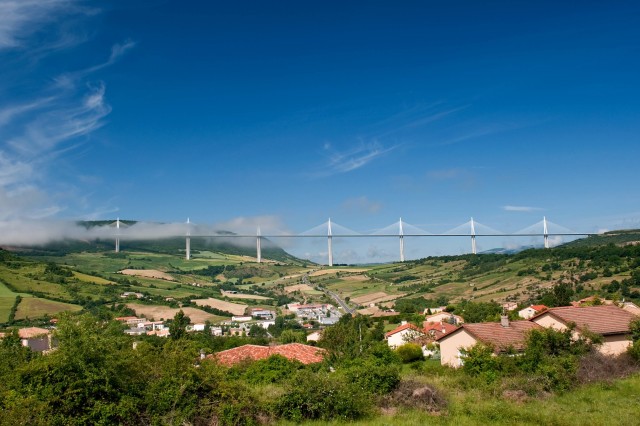 The Millau Viaduct is part of the A75-A71 autoroute axis from Paris to Béziers and Montpellier. The cost of construction was approximately €400 million. It was formally inaugurated on 14 December 2004, and opened to traffic on 16 December. The bridge has been consistently ranked as one of the great engineering achievements of all time. The bridge received the 2006 International Association for Bridge and Structural Engineering Outstanding Structure Award. 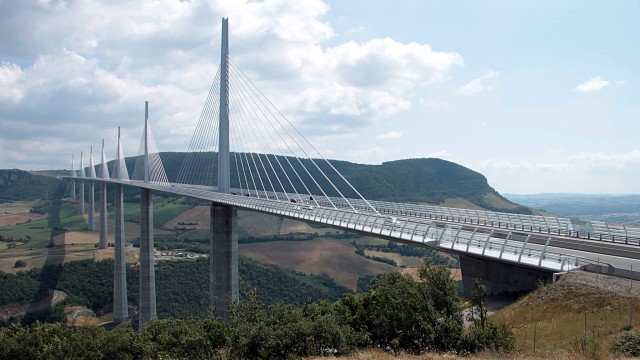 The Russky Bridge is a bridge built across the Eastern Bosphorus strait, to serve the Asia-Pacific Economic Cooperation conference that took place in Vladivostok in 2012. The bridge connects the mainland part of the city with Russky Island, where the main activities of the summit took place. The bridge was completed in July 2012 and opened by Russian Prime Minister Dmitry Medvedev. 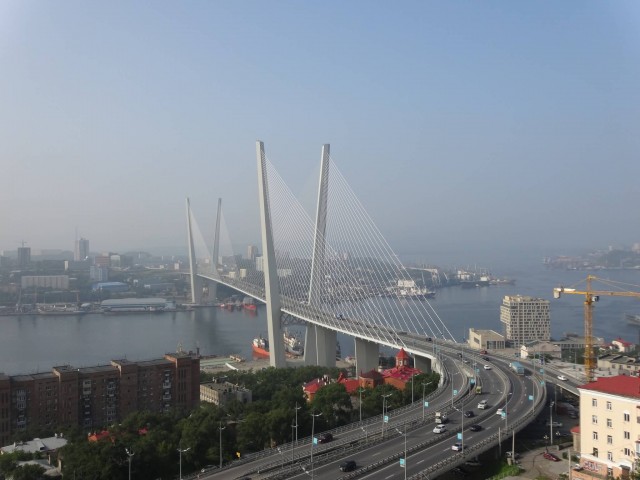 On September 3, 2012, the bridge was officially given its name. The bridge to Russky island is the world’s longest cable-stayed bridge, with a 1104 m long central span. The bridge also has the second highest pylons after the Millau Viaduct and the longest cable stays. The design of the bridge crossing has been determined on the basis of two primary factors: Shortest coast-to-coast distance in the bridge crossing location 1460 m. Navigable channel depth is up to 50 m. The locality of the bridge crossing construction site is characterized by severe climate conditions: temperatures vary from -31 °C to 37 °C; storms bring winds of up to 36 m/s and waves of up to 6 m in height; and ice formations in winter can be up to 70 cm thick. 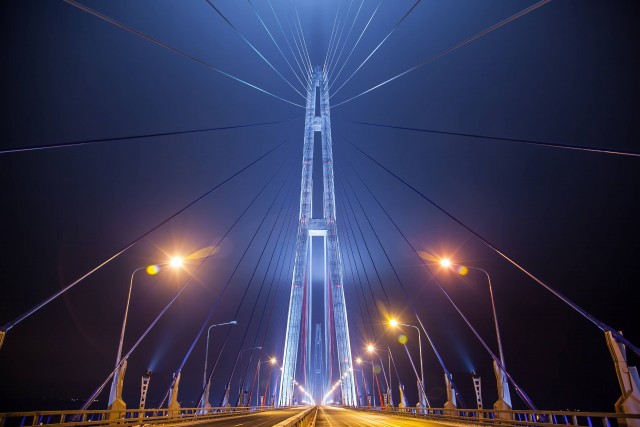 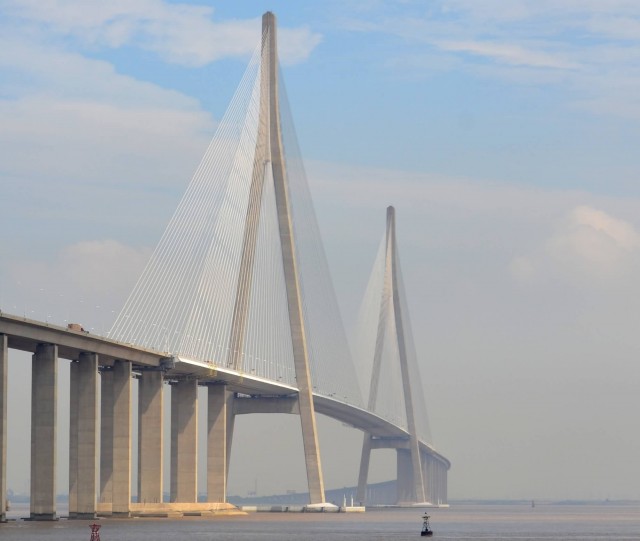 The Sutong Yangtze River Bridge is a cable-stayed bridge that spans the Yangtze River in China between Nantong and Changshu, a satellite city of Suzhou, in Jiangsu province. With a span of 1,088 metres, it was the cable-stayed bridge with the longest main span in the world in 2008-2012. Its two side spans are 300 metres each, and there are also four small cable spans. The bridge received the 2010 Outstanding Civil Engineering Achievement award from the American Society of Civil Engineers. Two towers of the bridge are 306 metres high and thus the second tallest in the world. 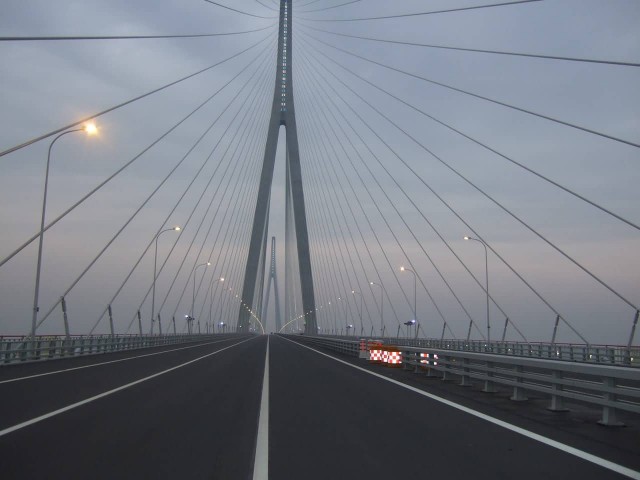 The total bridge length is 8,206 metres. Construction began in June 2003, and the bridge was linked up in June 2007. The bridge was opened to traffic on 25 May 2008 and was officially opened on 30 June 2008. Construction has been estimated to cost about US$1.7 billion. The completion of the bridge shortens the commute between Shanghai and Nantong, previously a four-hour ferry ride, to about an hour. It brings Nantong one step closer to becoming an important part of the Yangtze River Delta economic zone, and has further attracted foreign investors into the city. The bridge is also pivotal in the development of poorer northern Jiangsu regions. 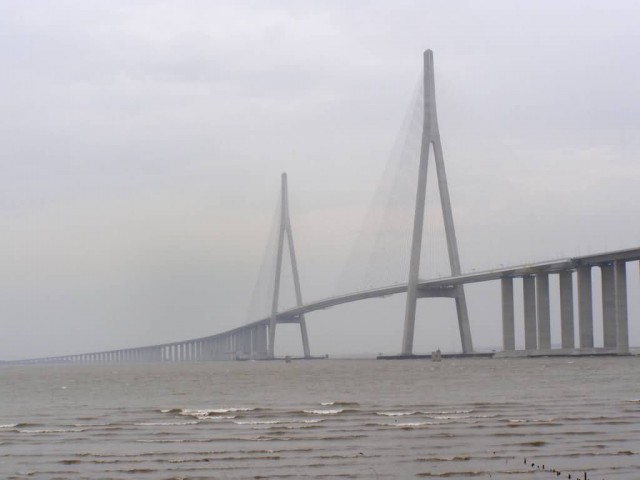 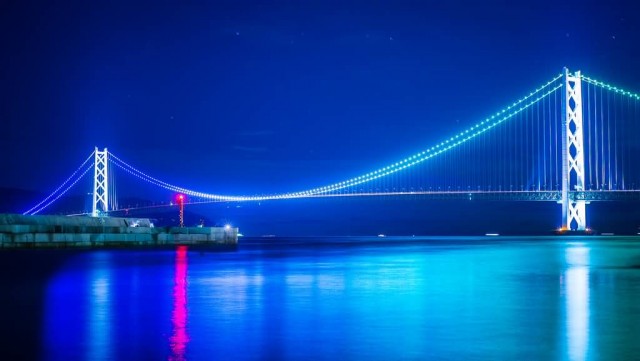 The Akashi Kaikyō Bridge, also known as the Pearl Bridge, links the city of Kobe on the mainland of Honshu to Iwaya on Awaji Island, in Japan. It crosses the busy Akashi Strait. It carries part of the Honshu-Shikoku Highway. Since its completion in 1998, the bridge has had the longest central span of any suspension bridge in the world, at 1,991 metres. It is one of the key links of the Honshū-Shikoku Bridge Project, which created three routes across the Inland Sea. 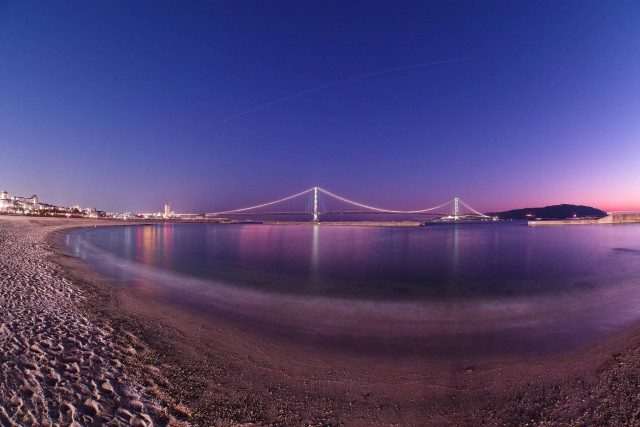 The total cost is estimated at 500 billion yen; it is expected to be repaid by charging drivers a toll to cross the bridge. The toll is 2,300 yen and the bridge is used by approximately 23,000 cars per day. At 2,300 yen/car annual revenue would equal 19.5 billion yen. Given the interest expense on 500 billion yen, this bridge will never be repaid, according to TV series MegaStructures. But annual revenue is around 4% of investment, so with near zero interest rates in Japan, the bridge will pay for itself in 30 years, plus enable the growth of the overall economy in the region. 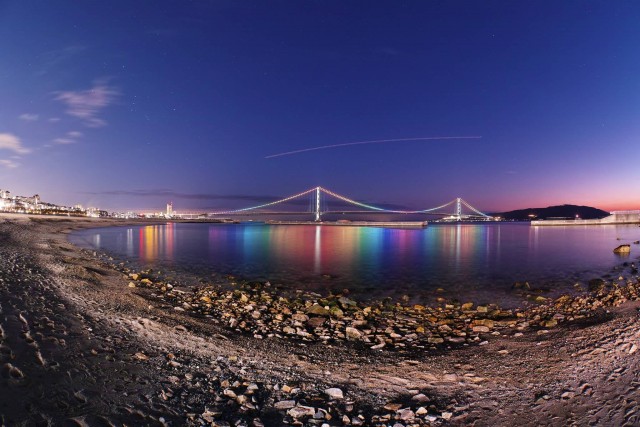 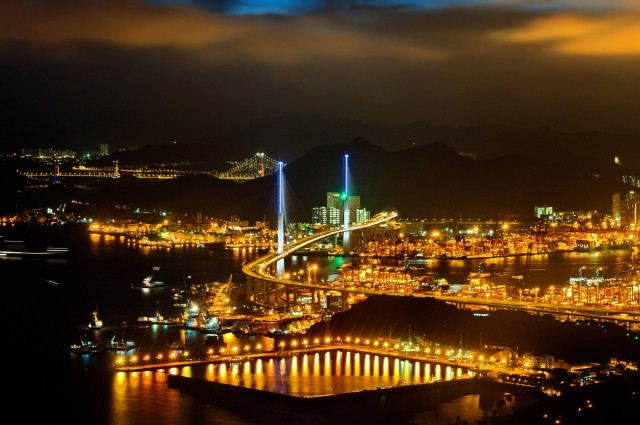 Stonecutters Bridge is a high level cable-stayed bridge which spans the Rambler Channel in Hong Kong, connecting Nam Wan Kok, Tsing Yi island and Stonecutters Island. The bridge deck was completed on 7 April 2009, making this the second longest cable-stayed span in the world at the time of its completion, and opened to traffic on 20 December 2009. The approaches at Tsing Yi and Stonecutters Island are located near Container Terminal 9 and Container Terminal 8, respectively. Construction commenced on 27 April 2004 by Maeda–Hitachi–Yokogawa–Hsin Chong joint venture. It cost HK$2.76 billion. It was reported to be over budget. The bridge is part of Hong Kong’s Route 8, connecting Sha Tin, Cheung Sha Wan, Tsing Yi island, Ma Wan and Lantau Island. 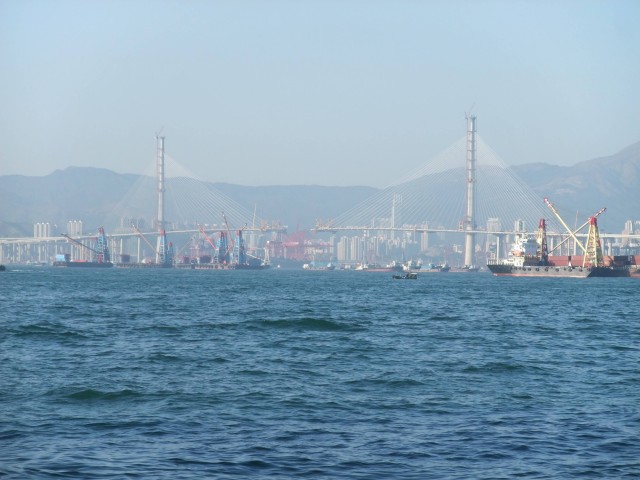 Other major constructions along the route are Nam Wan Tunnel, Eagle’s Nest Tunnel, Sha Tin Heights Tunnel, Tsing Ma Bridge and Kap Shui Mun Bridge. As a result of the interesting challenges and extreme difficulty in constructing this bridge, the project was featured on two of the Discovery Channel’s Extreme Engineering series on 1 November 2006 and 27 April 2009. The Stonecutters Bridge won the 2010 Supreme Award at the annual Structural Awards presented by the Institution of Structural Engineers, United Kingdom. 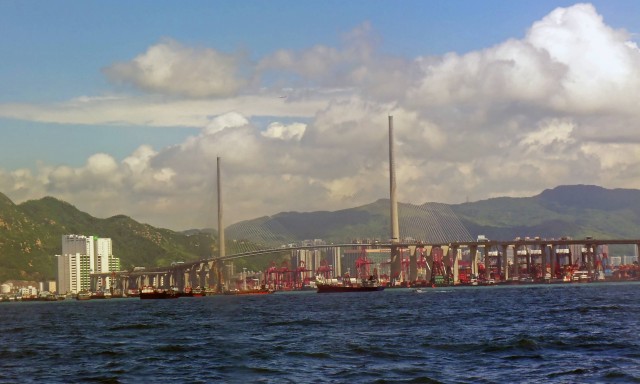 The Great Belt Fixed Link runs between the Danish islands of Zealand and Funen. It consists of three structures: a road suspension bridge and a railway tunnel between Zealand and the small island Sprogø located in the middle of the Great Belt, and a box girder bridge for both road and rail traffic between Sprogø and Funen. The “Great Belt Bridge” commonly refers to the suspension bridge, although it may also be used to mean the box-girder bridge or the link in its entirety.

The suspension bridge, officially known as the East Bridge, has the world’s third longest main span, the longest outside of Asia. It was designed by the Danish engineering firms COWI and Ramboll. The link replaced the ferry service that had been the primary means of crossing the Great Belt. After more than five decades of speculation and debate, the decision to construct the link was made in 1986, the original intent was to complete the railway link three years before opening the road connection, but the link opened to rail traffic in 1997 and road traffic in 1998. At an estimated cost of DKK 21.4 billion, the link is the largest construction project in Danish history. Operation and maintenance are performed by A/S Storebælt under Sund & Bælt.

Construction and maintenance are financed by tolls on vehicles and trains. The link has reduced travel times significantly; previously taking about an hour by ferry, the Great Belt can now be crossed in about ten minutes. The construction of the link and the Øresund Bridge have together enabled driving from mainland Europe to Sweden and the rest of Scandinavia through Denmark. Cyclists are not permitted to use the bridge, but cycles may be transported by train or bus. 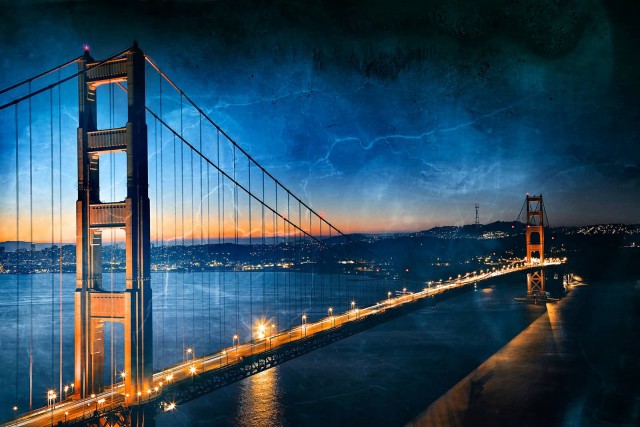 The Golden Gate Bridge is a suspension bridge spanning the Golden Gate strait, the mile-wide, three-mile-long channel between San Francisco Bay and the Pacific Ocean. The structure links the U.S. city of San Francisco, on the northern tip of the San Francisco Peninsula, to Marin County, bridging both U.S. Route 101 and California State Route 1 across the strait. 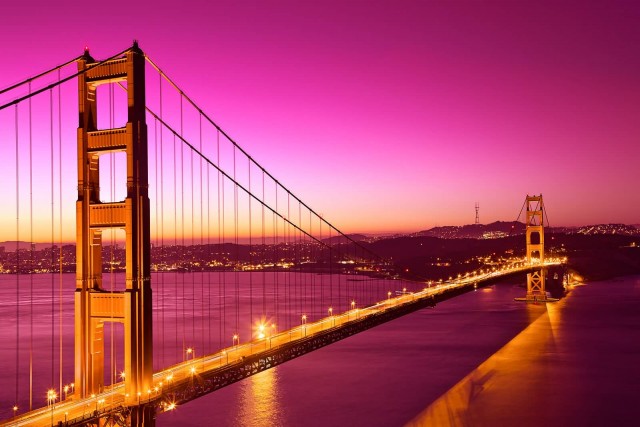 The bridge is one of the most internationally recognized symbols of San Francisco, California, and the United States. It has been declared one of the Wonders of the Modern World by the American Society of Civil Engineers. The Frommers travel guide considers the Golden Gate Bridge “possibly the most beautiful, certainly the most photographed, bridge in the world”. It opened in 1937 and was, until 1964, the longest suspension bridge main span in the world, at 4,200 feet. 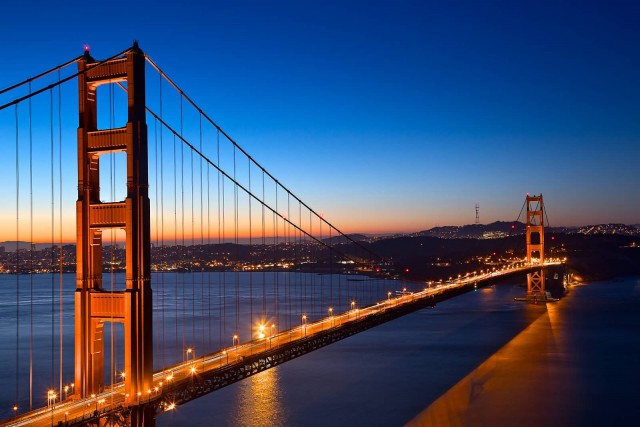 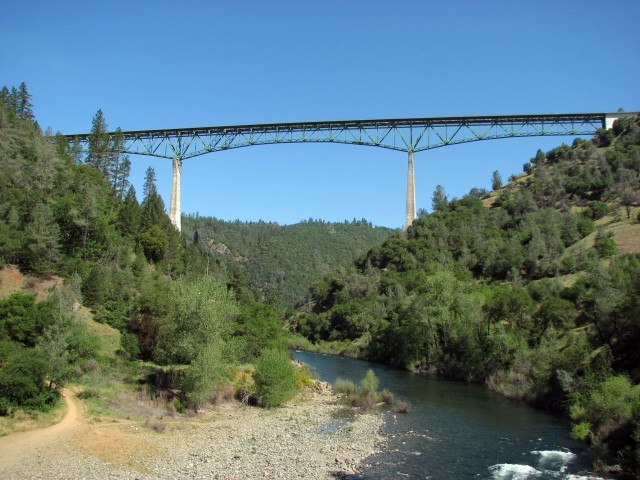 The Foresthill Bridge over the North Fork American River is the highest bridge in the U.S. state of California and the fourth highest in the United States. It is also sometimes referred to as the Auburn-Foresthill Bridge or the Auburn Bridge. Originally constructed to accompany the unbuilt Auburn Dam, the bridge stands 731 feet above the riverbed. It was fabricated in 1971 by Kawasaki Heavy Industries in Japan, built by Willamette Western Contractors, and opened in 1973. 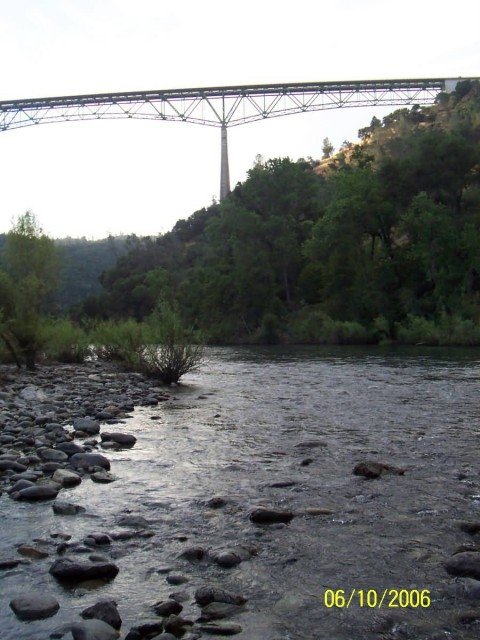 The bridge spans the North Fork of the American River in Placer County between the city of Auburn and the town of Foresthill in the Sierra Nevada foothills. Pedestrians can walk the length of the bridge in both directions. There is anti-Auburn Dam graffiti, showing protest of the planned dam, on the bridge’s underside. A seismic retrofit project was begun in January 2011 and will cost an estimated $74.4 million . The original bridge cost less than $13 million. The bridge can be seen in the beginning of the action movie xXx in which Vin Diesel’s character Xander Cage is seen driving a stolen red Chevrolet Corvette off of it, then jumping from the car mid-flight and parachuting to his accomplices at the bottom of the American River Canyon. It also appears in a montage sequence toward the end of the romantic comedy The Ugly Truth. 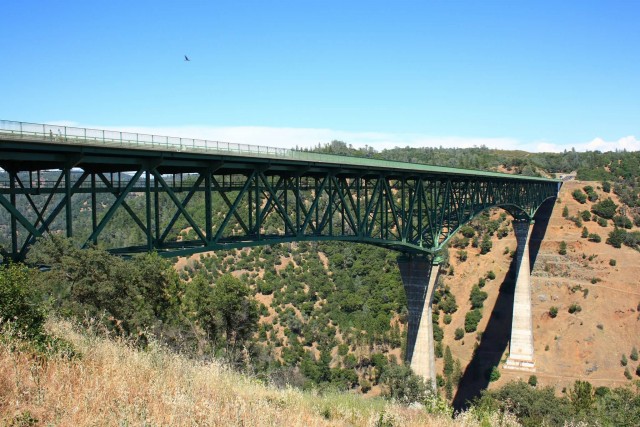 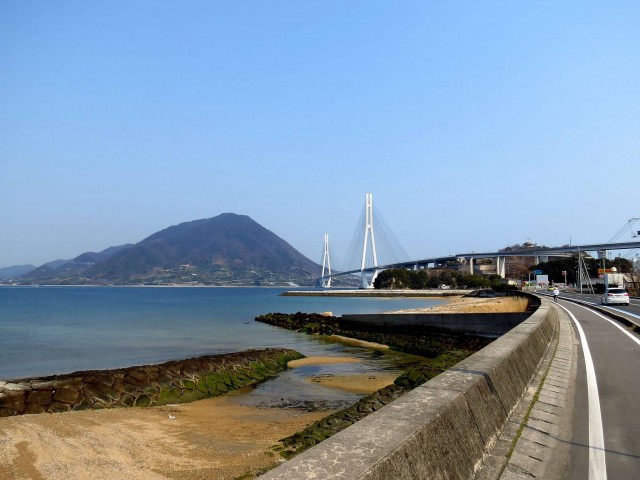 The Tatara Bridge is a cable-stayed bridge that is part of the Nishiseto Expressway, commonly known as the Shimanami Kaidō. The bridge has a center span of 890 metres. As of 2010 it has the fourth longest main span of any cable-stayed bridge after the Sutong Bridge. The expressway is a series of roads and bridges that is one of the three routes of the Honshū-Shikoku Bridge Project connecting the islands of Honshū and Shikoku across the Seto Inland Sea in Japan. The Kurushima-Kaikyō Bridge is on the same route. 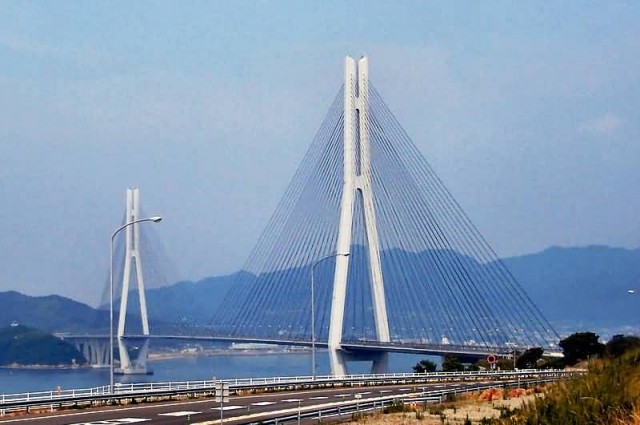 The bridge, which opened on May 1, 1999, carries two lanes of traffic in each direction and has additional lanes for bicycles, motor bikes, and pedestrians. The Tatara Bridge was originally planned as a suspension bridge in 1973. In 1989, the design was changed to a cable-stayed bridge with the same span. By building a cable-stayed bridge a large excavation for an anchorage would not be needed, thereby lessening the environmental impact on the surrounding area. The steel towers are 220 metres high and shaped like an inverted Y. The side-spans are 164.5 metres and 257.5 metres respectively, and there are also three very small cable spans. Construction of the bridge took a little more than six years and was accomplished without any accidents. Many technological advancements were part of the design and testing of the bridge. 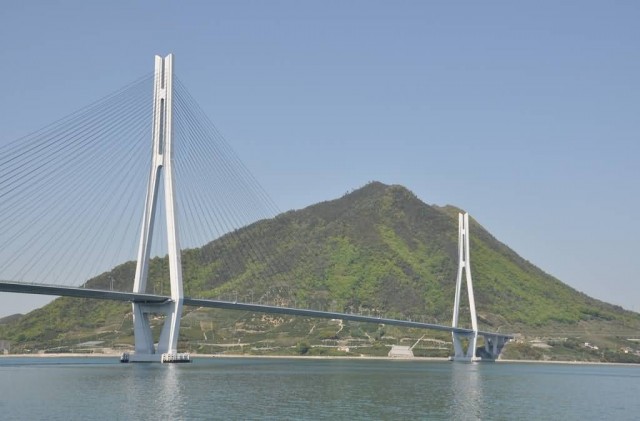 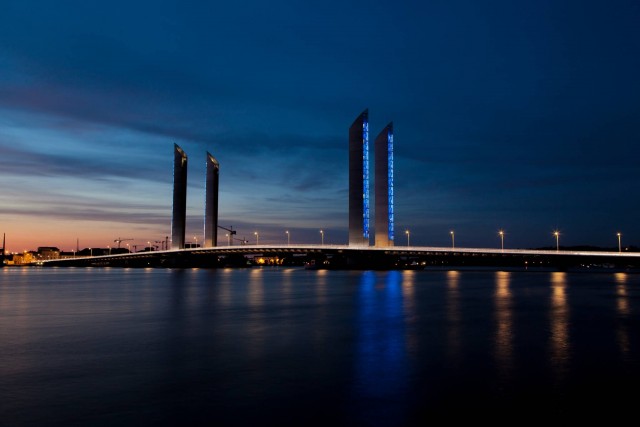 The Pont de Normandie is a cable-stayed road bridge that spans the river Seine linking Le Havre to Honfleur in Normandy, northern France. Its total length is 2,143.21 metres – 856 metres between the two piers. It is also the last bridge to cross the Seine before it empties into the ocean. 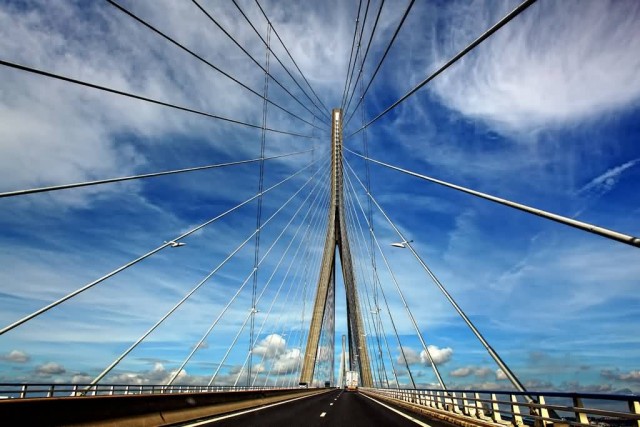 Despite being a motorway toll bridge, there is a footpath as well as a narrow cycle lane in each direction allowing pedestrians and cyclists to cross the bridge free of charge. The span, 23.6 metres wide, is divided into four lanes for traffic and two lanes for pedestrians. The pylons, made of concrete, are shaped as upside-down Ys. They weigh more than 20,000 tons and are 214.77 metres tall. More than 19,000 tons of steel and 184 Freyssinet cables were used. 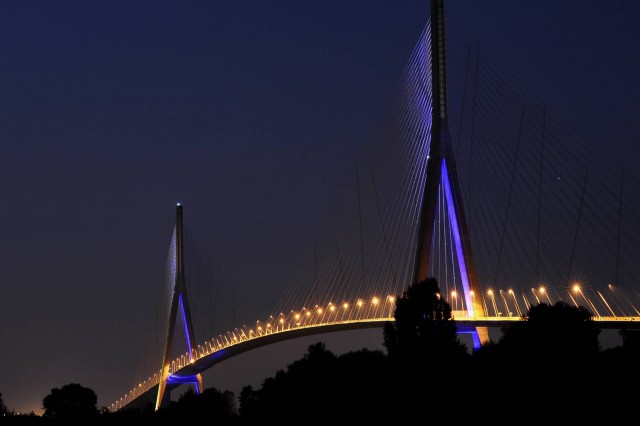