Top 10 Rarest And Delicious Fruits In The World

Cupuaçu, also spelled cupuassu, cupuazú, cupu assu, and copoasu, is a tropical rainforest tree related to cacao. Common throughout the Amazon basin, it is widely cultivated in the jungles of Colombia, Bolivia and Peru and in the north of Brazil. Cupuaçu fruits are oblong, brown, and fuzzy, 20 cm  long, 1–2 kg in weight, and covered with a thick, hard exocarp. 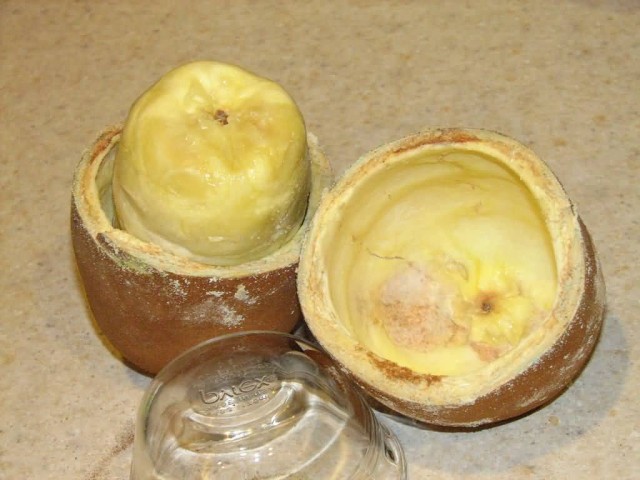 The white pulp of the cupuaçu is uniquely fragrant described as a mix of chocolate and pineapple, and is frequently used in desserts, juices and sweets. The juice tastes primarily like a pear, with a hint of banana and is touted as a possible superfruit flavor. Commercial production of cupuaçu includes food supplements, pills, drinks, smoothies and sweets. 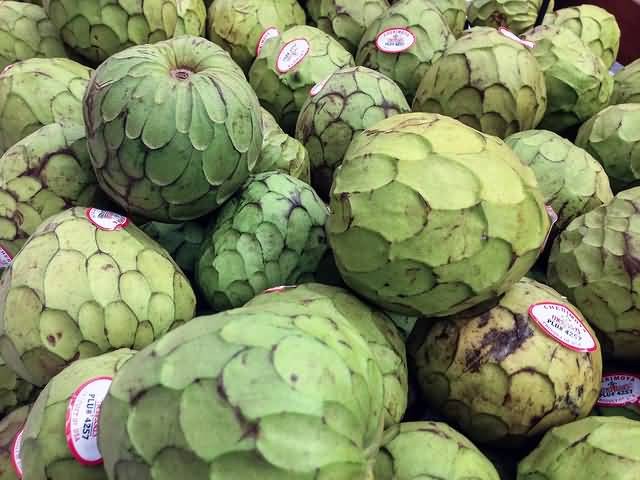 The cherimoya, also spelled chirimoya, is the fruit of the species Annona cherimola, which generally is thought to be native to Ecuador, Colombia, Peru and Bolivia. Mark Twain called the cherimoya “the most delicious fruit known to men.” The creamy texture of the flesh gives the fruit its secondary name, custard apple. The fruit is oval, often slightly oblate, 10–20 cm long and 7–10 cm in diameter, with a smooth or slightly tuberculated skin. 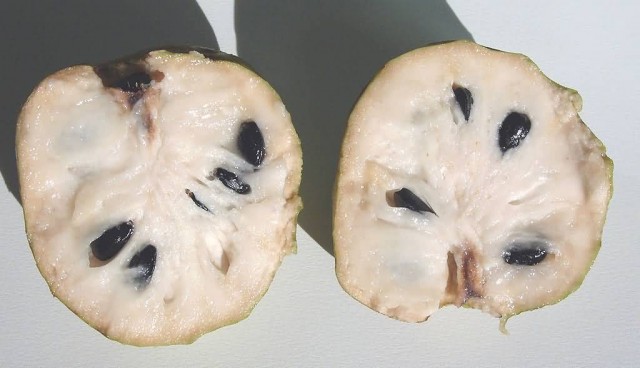 The fruit flesh is white and creamy, and has numerous dark brown seeds embedded in it. When ripe, the skin is green and gives slightly to pressure. Some characterize the fruit flavor as a blend of banana, pineapple, papaya, peach, and strawberry. The fruit can be chilled and eaten with a spoon, which has earned it another nickname, the ice cream fruit. 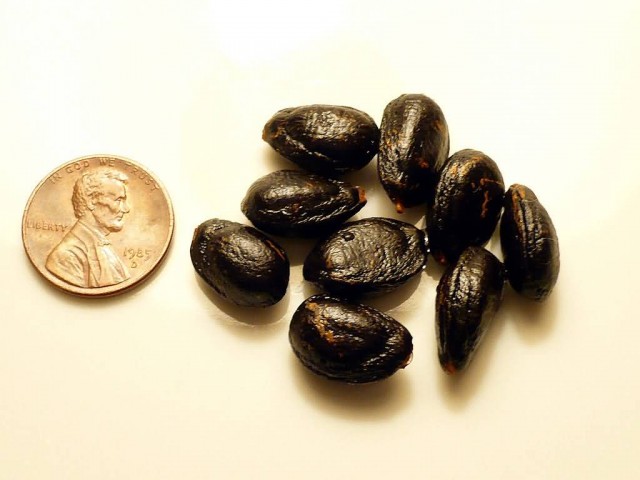 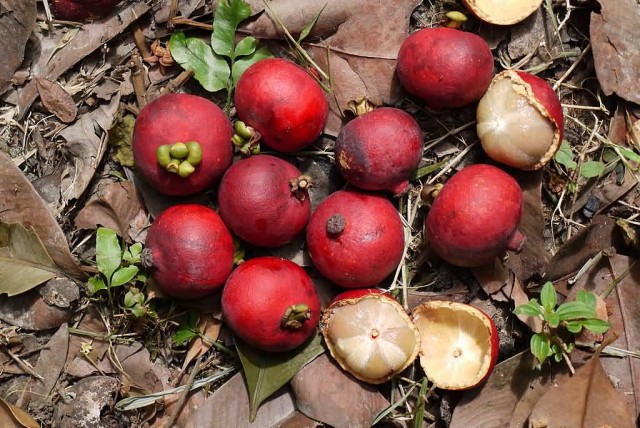 The fruit of the mangosteen is sweet and tangy, juicy, somewhat fibrous, with fluid-filled vesicles, with an inedible, deep reddish-purple colored rind (exocarp) when ripe. In each fruit, the fragrant edible flesh that surrounds each seed is botanically endocarp, i.e, the inner layer of the ovary. The juvenile mangosteen fruit, which does not require fertilisation to form, first appears as pale green or almost white in the shade of the canopy. 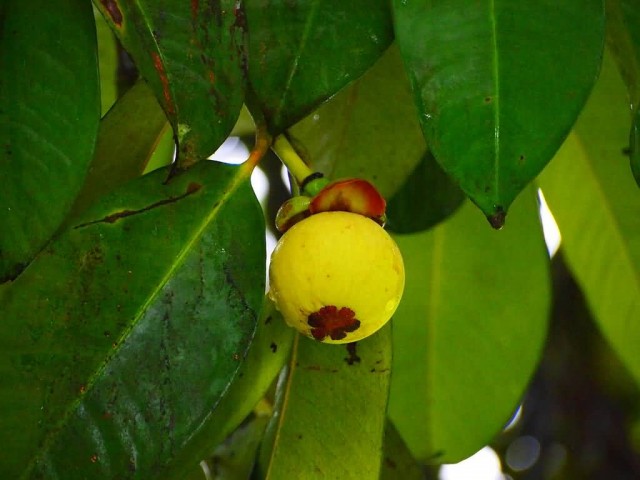 As the fruit enlarges over the next two to three months, the exocarp colour deepens to darker green. During this period, the fruit increases in size until its exocarp is 6–8 centimetres in outside diameter, remaining hard until a final, abrupt ripening stage. 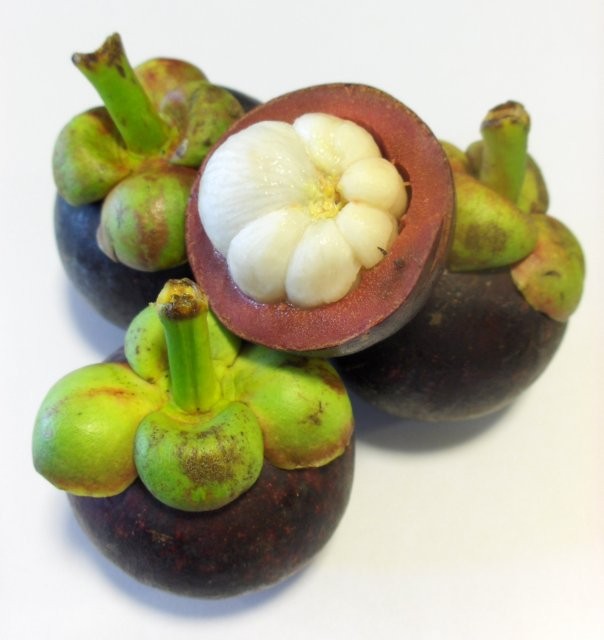 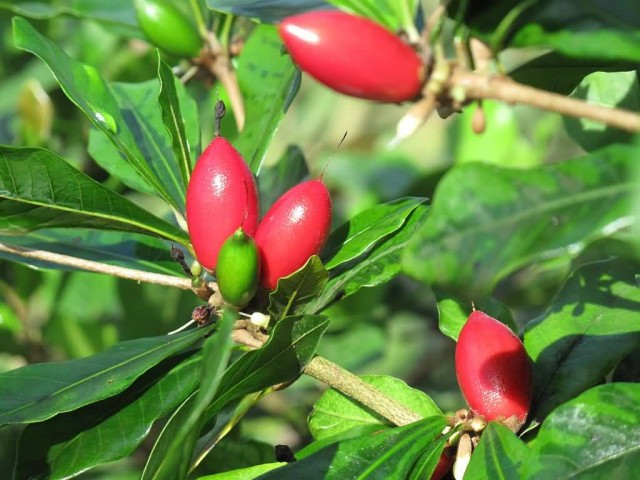 Synsepalum dulcificum, also known as the miracle fruit, is a plant with a berry that when eaten, causes sour foods such as lemons and limes, subsequently consumed to taste sweet. The berry itself has a low sugar content and a mildly sweet tang.It contains a glycoprotein molecule, with some trailing carbohydrate chains, called miraculin. When the fleshy part of the fruit is eaten, this molecule binds to the tongue’s taste buds, causing sour foods to taste sweet. 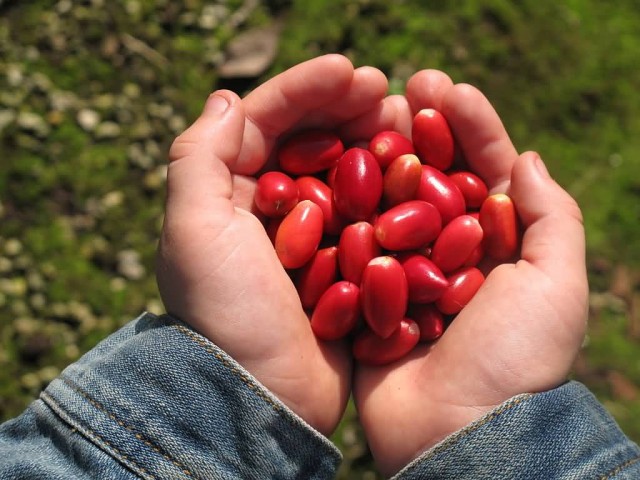 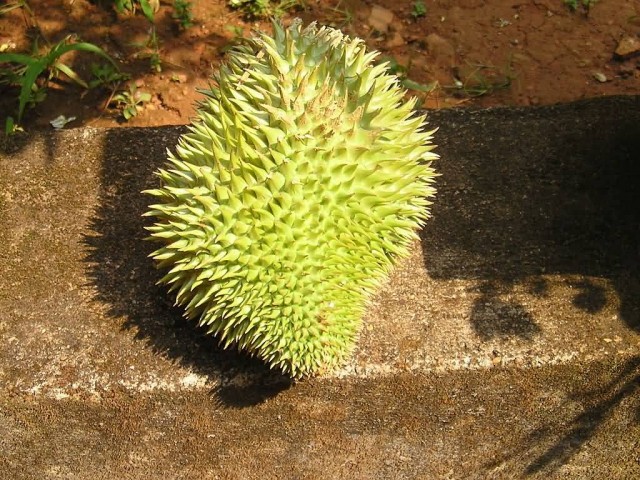 The durian is the fruit of several tree species belonging to the genus Durio. Regarded by many people in southeast Asia as the “king of fruits”, the durian is distinctive for its large size, strong odour, and formidable thorn-covered husk. The fruit can grow as large as 30 centimetres long and 15 centimetres  in diameter, and it typically weighs one to three kilograms. Its shape ranges from oblong to round, the colour of its husk green to brown, and its flesh pale yellow to red, depending on the species. The edible flesh emits a distinctive odour that is strong and penetrating even when the husk is intact. 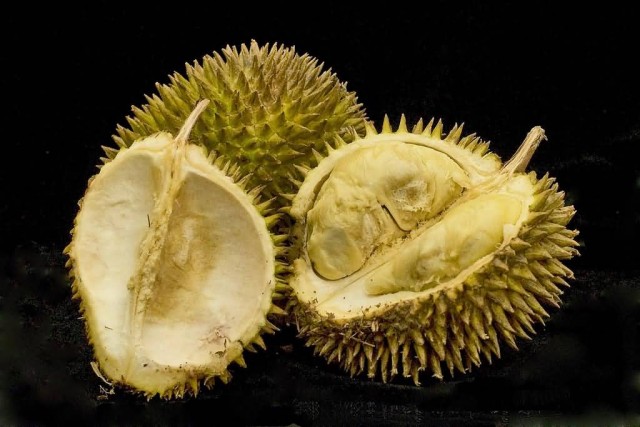 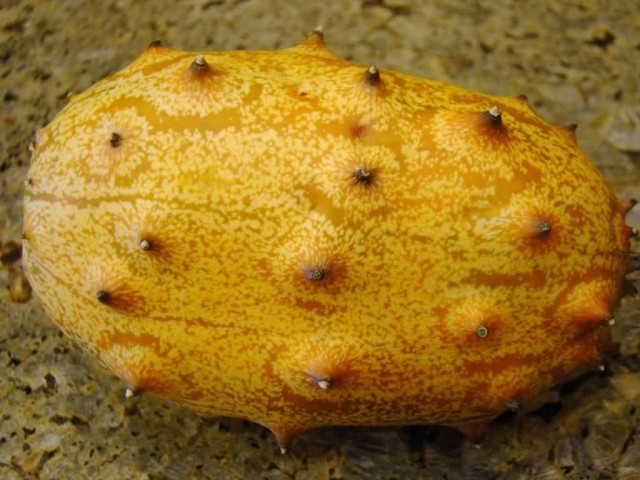 Fruit has horn-like spines, hence the name “horned melon”. Ripe fruit has yellow-orange skin and lime green, jelly-like flesh with a tart taste, and texture similar to a cucumber. It is one of the few sources of water during the dry season in the Kalahari Desert. In northern Zimbabwe it is called gaka or gakachika, and is primarily used as a snack or salad, and rarely for decoration. It can be eaten at any stage of ripening, but when overripened, will burst forcefully to release seeds. 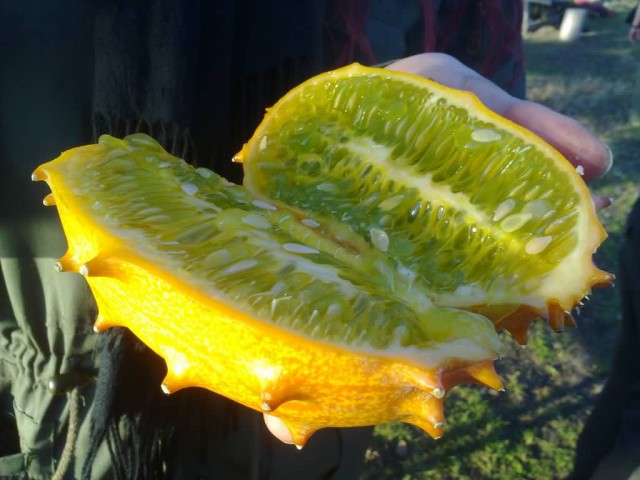 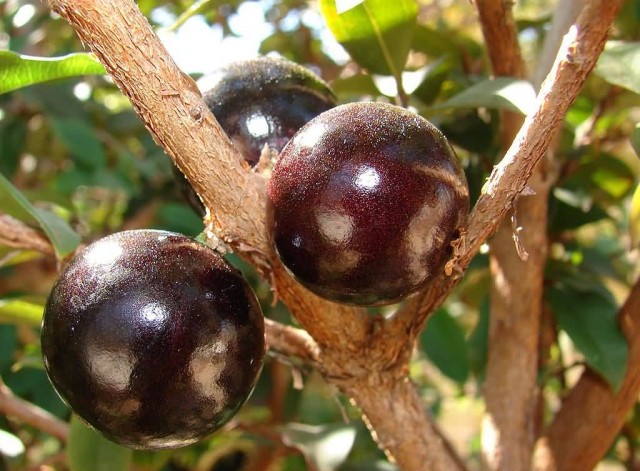 Is the fruit of the Jabuticabeira tree. The tree is grown for its purplish-black, white-pulped fruits; they can be eaten raw or be used to make jellies and drinks. The fruit is a thick-skinned berry and typically measures 3–4 cm in diameter. Embedded within the flesh are one to four large seeds, which vary in shape depending on the species. 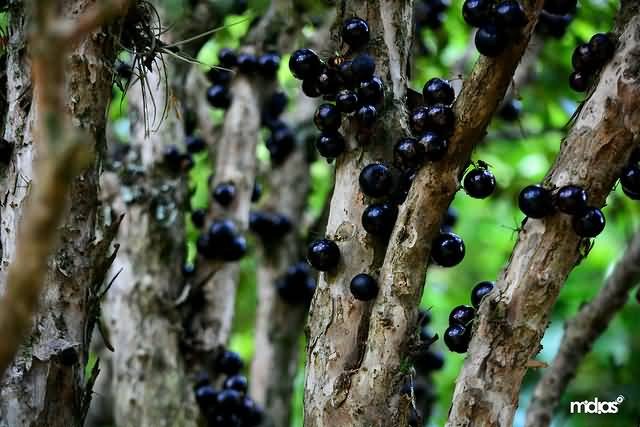 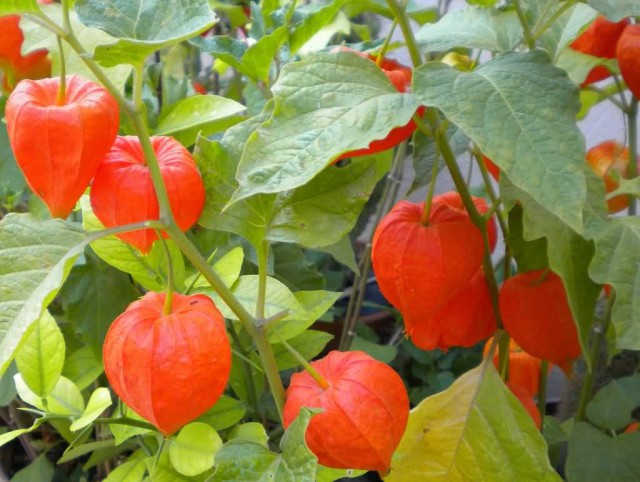 Physalis  is a genus of flowering plants in the nightshade family, which grow in warm temperate and subtropical regions of the world. Most of the species, of which there may be 75-90, are indigenous to the New World with one notable exception. 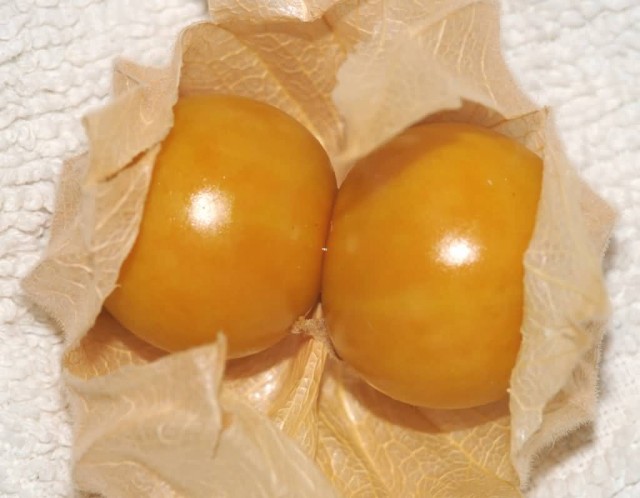 The fruit is small and orange, similar in size, shape and structure to a small tomato. Once extracted from its husk, it can be eaten raw and used in salads. Some varieties are added to desserts, used as flavoring, made into fruit preserves, or dried and used like raisins. They contain pectin and can be used in pie filling. 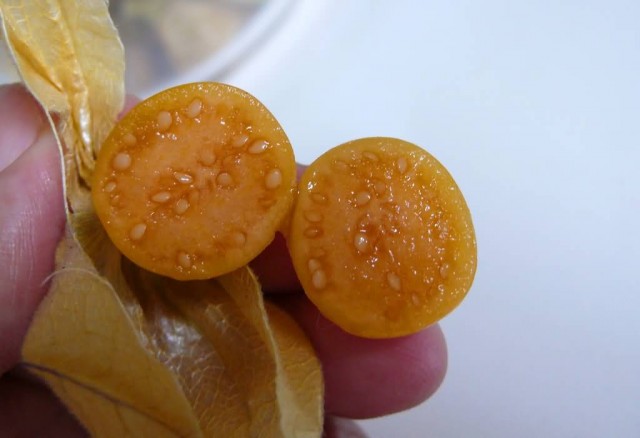 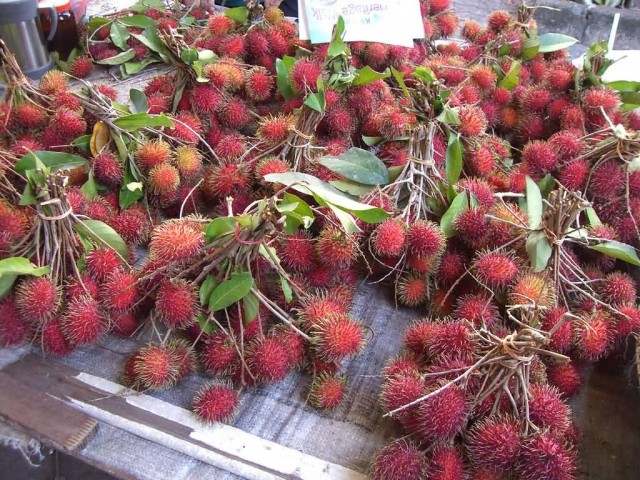 The rambutan is a medium-sized tropical tree in the family Sapindaceae. The name also refers to the fruit produced by this tree. The fruit is a round to oval, single-seeded berry, 3–6 cm long and 3–4 cm broad, borne in a loose pendant cluster of 10–20 together. The leathery skin is reddish, rarely orange or yellow, and covered with fleshy pliable spines, hence the name, which means ‘hairs’. The fruit flesh, which is actually the aril, is translucent, whitish or very pale pink, with a sweet, mildly acidic flavor very reminiscent of grapes. 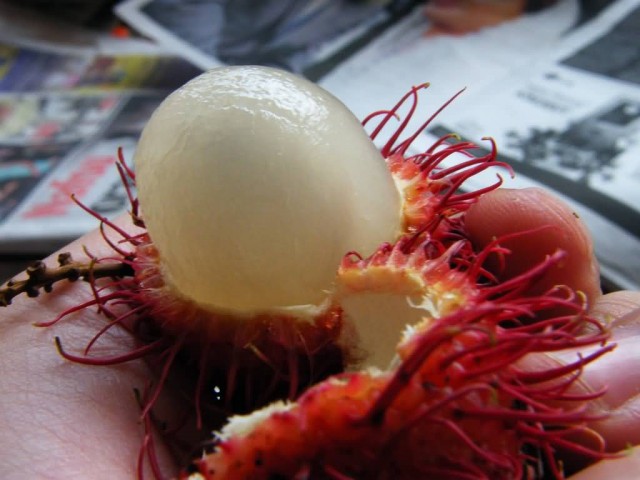 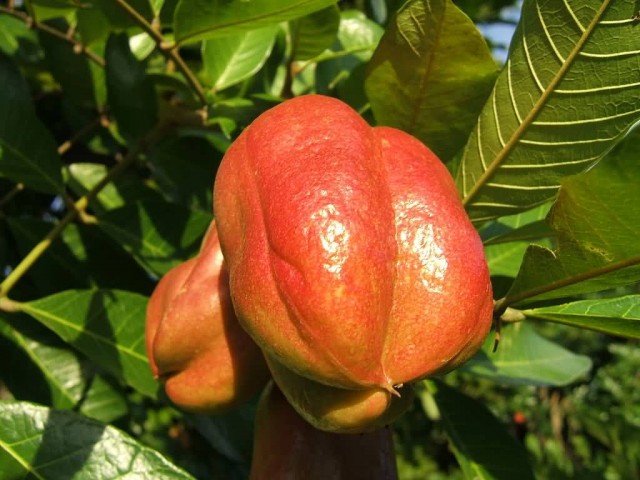 The ackee, also known as achee, ackee apple or akee is a member of the Sapindaceae, as are the lychee and the longan. The fruit is pear-shaped. The fruit typically weighs 100–200 grams. When it ripens, it turns from green to a bright red to yellow-orange, and splits open to reveal three large, shiny black seeds, each partly surrounded by soft, creamy or spongy, white to yellow flesh—the aril. 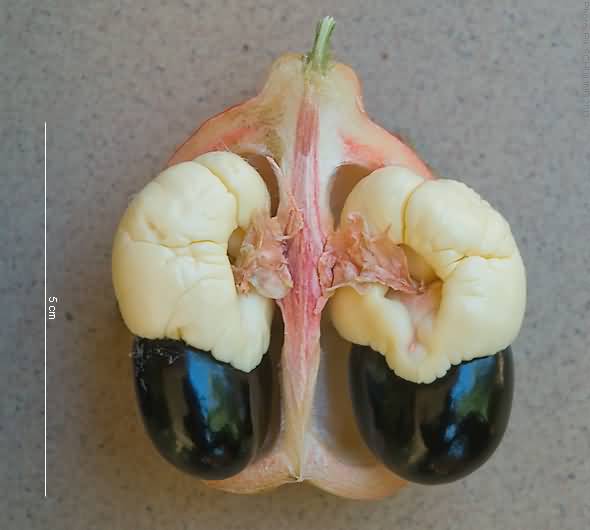