10 Most Poisonous And Dangerous Snakes In the Universe 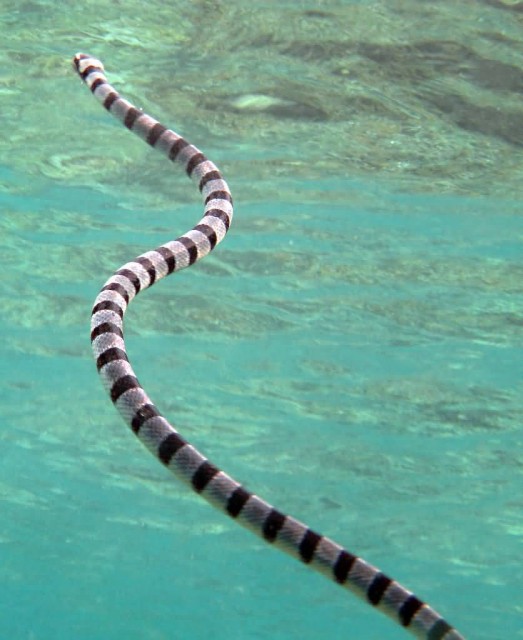 Hydrophis belcheri, commonly known as the faint-banded sea snake or Belcher’s sea snake is a venomous species of elapid sea snake. It has a timid temperament and would normally have to be subjected to severe mistreatment before biting. Usually those bitten are fishermen handling nets, although only a quarter of those bitten are envenomed since the snake rarely injects much of its venom. Because of this and its docile nature, it is generally not regarded as very dangerous. Although not much is known about the venom of this species, its LD50 toxicity in mice has been determined to be 0.24 mg/kg when delivered intramuscularly.

Belcher’s sea snake, which many times is mistakenly called the hook-nosed sea snake, has been erroneously popularized as the most venomous snake in the world, due to Ernst and Zug’s published book “Snakes in Question: The Smithsonian Answer Book” from 1996. Associate Professor Bryan Grieg Fry a promeinnt venom expert has clarified the error: “The hook nosed myth was due to a fundamental error in a book called ‘Snakes in question’. In there, all the toxicity testing results were lumped in together, regardless of the mode of testing. As the mode can influence the relative number, venoms can only be compared within a mode. Otherwise, its apples and rocks.”. 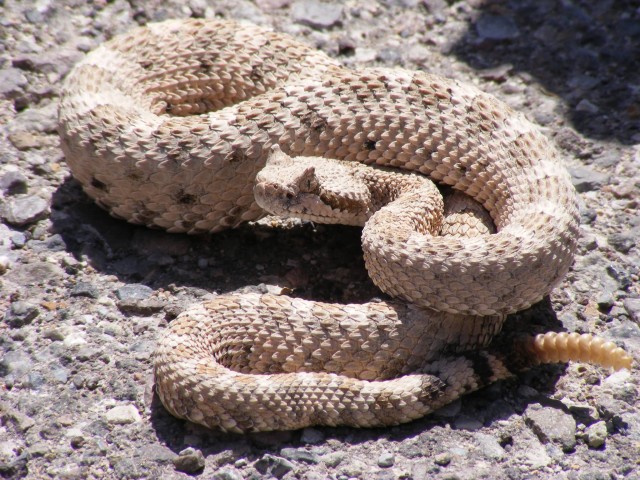 Rattlesnakes are a group of venomous snakes of the genera Crotalus and Sistrurus of the subfamily Crotalinae. The 32 known species of rattlesnakes have between 65 and 70 subspecies, all native to the Americas, ranging from southern Alberta and southern British Columbia in Canada to Central Argentina. Rattlesnakes are predators that live in a wide array of habitats, hunting small animals such as birds and rodents. They kill their prey with a venomous bite, rather than by constricting. All rattlesnakes possess a set of fangs with which they inject large quantities of hemotoxic venom. 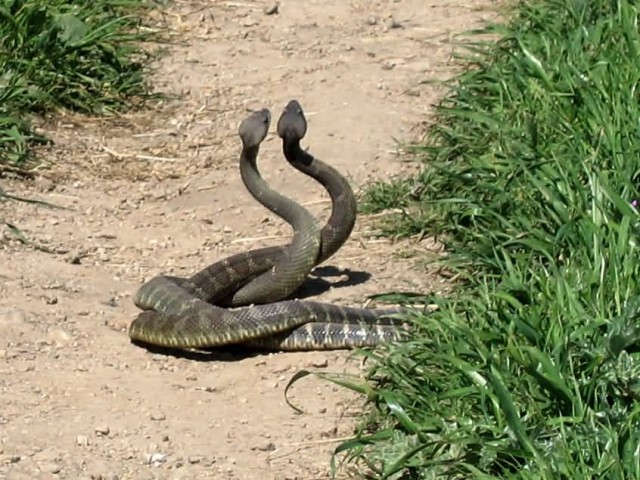 The venom travels through the bloodstream, destroying tissue and causing swelling, internal bleeding, and intense pain. Some species, such as the tiger rattlesnake and the Mojave rattlesnake, additionally possess a neurotoxic component in their venom that causes paralysis and other nervous system symptoms. The threat of envenomation, advertised by the loud shaking of the titular noisemaker at the end of their tails, deters many predators. However, rattlesnakes fall prey to hawks, weasels, king snakes and a variety of other species. Rattlesnakes are heavily preyed upon as neonates, while they are still weak and mentally immature. Large numbers of rattlesnakes are killed by humans. 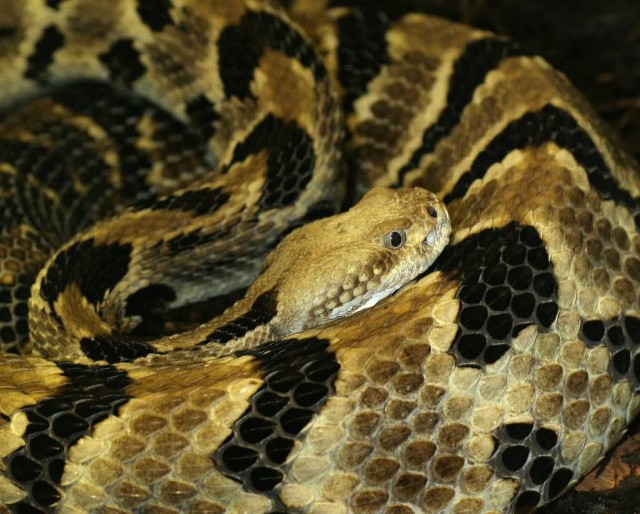 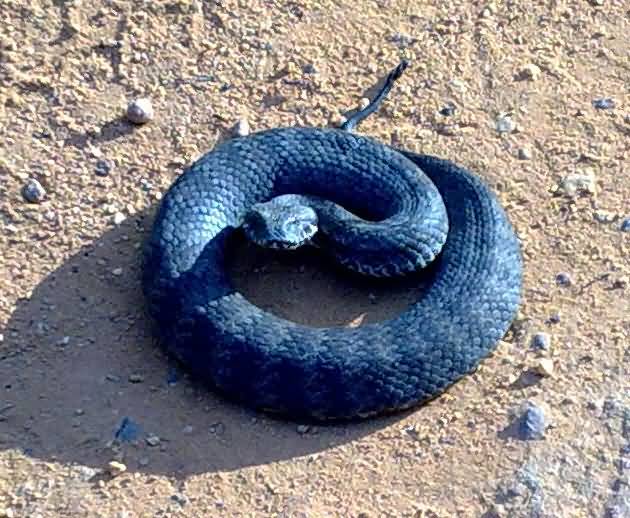 The common death adder is a member of the Elapidae family, rather than the Viperidae family of snakes, which are not found in Australia. Common death adders have broad flattened, triangular heads and thick bodies. Reaching a body length of 70–100 cm maximum. It also has bands of red, brown and black with a grey, cream or pink belly. 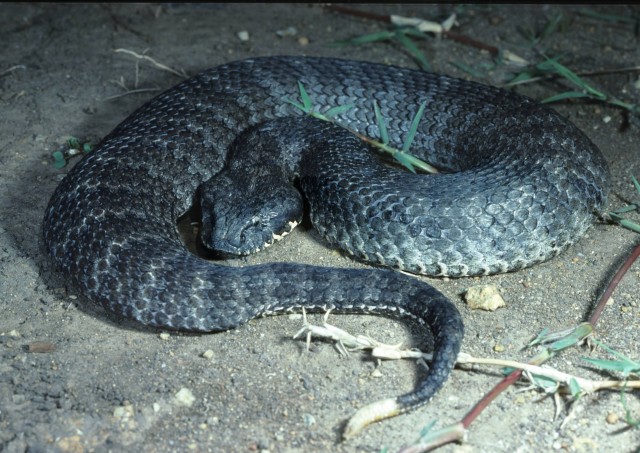 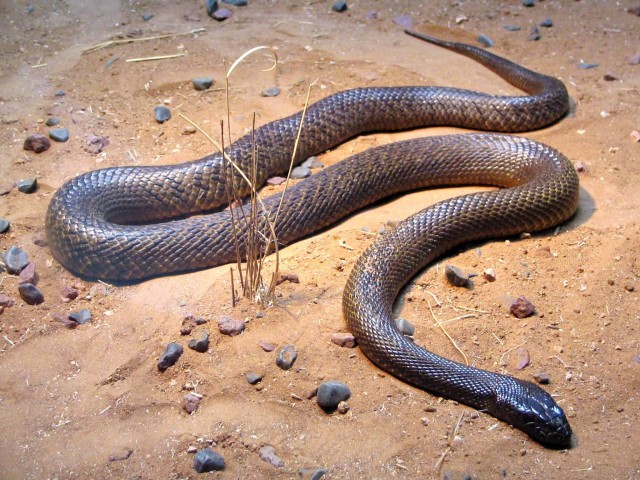 The inland taipan, also commonly known as the western taipan, the small-scaled snake, or the fierce snake is an extremely venomous snake of the taipan genus and is endemic to semi-arid regions of central east Australia. Aboriginal Australians living in those regions named the snake Dandarabilla. It was first described by Frederick McCoy in 1879 and then by William John Macleay in 1882 but for the next 90 years, it was a mystery species to the scientific community.

The inland taipan is considered the most venomous snake in the world; based on the median lethal dose value in mice, its venom, drop for drop, is by far the most toxic of any snake much more so than even sea snakes and it has the most toxic venom of any reptile when tested on human heart cell culture. Unlike most snakes, the inland taipan is a specialist mammal hunter so its venom is specially adapted to kill warm-blooded species.

It is estimated that one bite possesses enough lethality to kill at least 100 full grown men and depending on the nature of the bite, it has the potential to kill someone in as little as 30 to 45 minutes if left untreated. It is an extremely fast and agile snake which can strike instantly with extreme accuracy, often striking multiple times in the same attack, and it envenoms in almost every case. 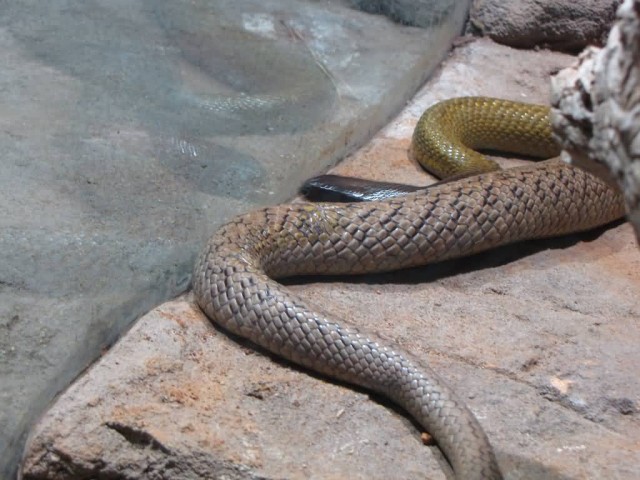 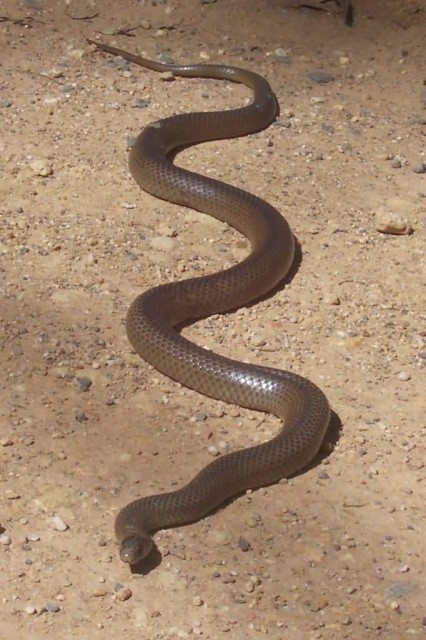 The eastern brown snake, often referred to as the common brown snake, is a species of venomous elapid snake of the genus Pseudonaja. This snake is considered the world’s second most venomous land snake based on its LD50 value in mice. It is native to Australia, Papua New Guinea, and Indonesia.

The eastern brown snake is diurnal. It is notorious for its speed and aggression throughout its habitats. When highly agitated, they hold their necks high, appearing in an upright S-shape. The snake usually seeks to flee when confronted, though it can be highly defensive if provoked. This species is attracted to rural and farming areas, probably due to the large numbers of associated rodents. Such areas also normally provide shelter in the form of rubbish and other cover. 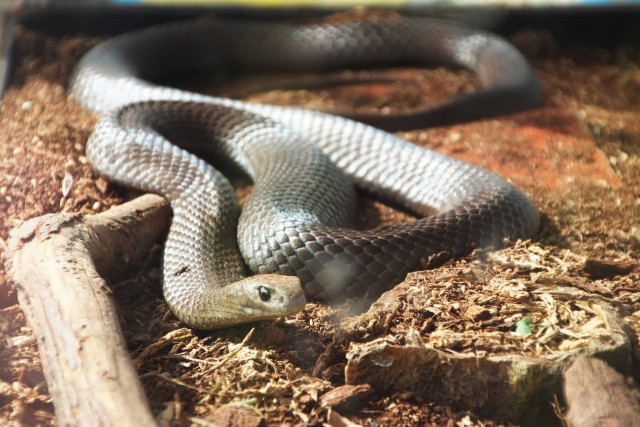 The common krait is a species of venomous snake of the genus Bungarus found in the jungles of the Indian subcontinent. It is a member of the “big four”, species inflicting the most snakebites on humans in India. This species is found in Peninsular India from Sindh to the West Bengal plains.

It occurs throughout South India and Sri Lanka at elevations up to about 1600 m. It is also recorded from Afghanistan, Bangladesh, and Nepal. Its range comprises a wide variety of habitats. It is found in fields and low scrub jungle, as well as inhabited areas. It is known to take up residence in termite mounds, brick piles, rat holes, even inside houses. It is frequently found in water or in proximity to a water source. 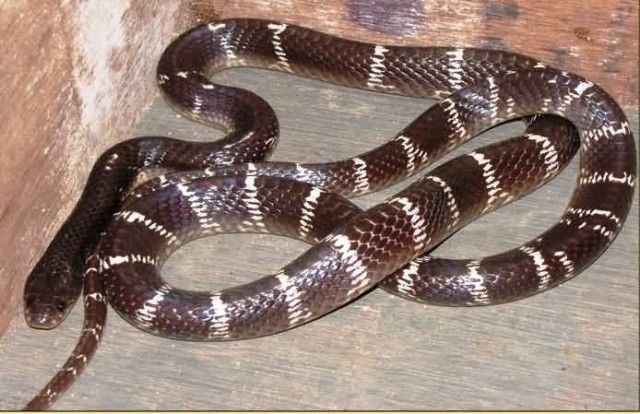 The adult snake’s length typically ranges from 2 m to 3 m, although larger examples have been recorded. It is also the fastest moving snake in Africa and one of the fastest moving snakes in the world, capable of moving at 11 km/h over short distances. The venom of the black mamba is highly toxic; potentially causing collapse in humans within 45 minutes or less. Without effective antivenom therapy, death typically occurs in 7–15 hours. Its venom is chiefly composed of neurotoxins, specifically dendrotoxin.

The black mamba is capable of striking at considerable range and occasionally may deliver a series of bites in rapid succession. Despite its reputation for being very aggressive, like most snakes, it usually attempts to flee from humans unless threatened or cornered. 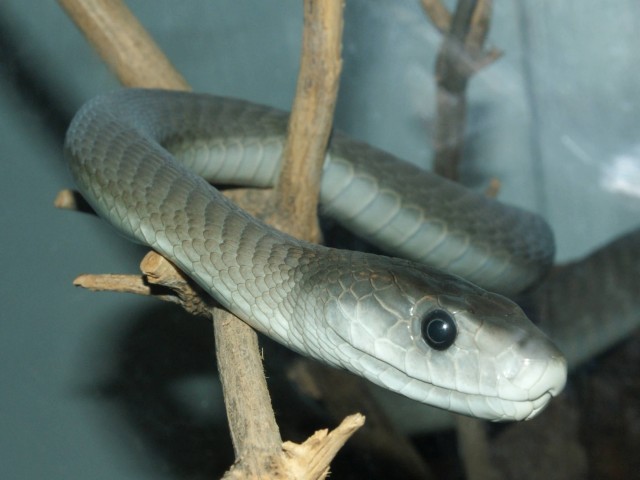 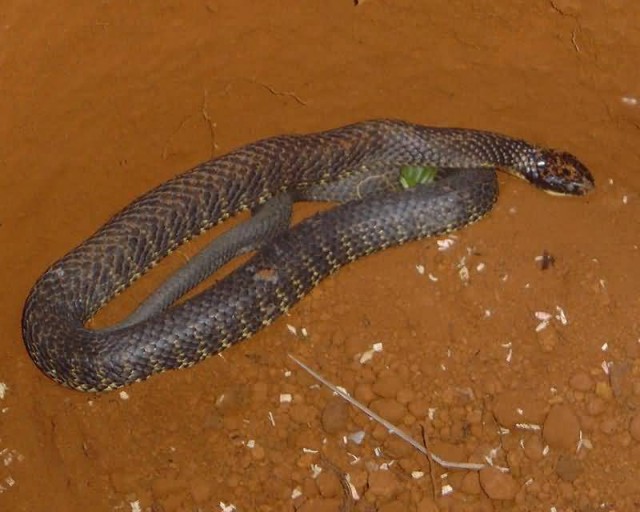 Tiger snakes are a type of venomous snake found in southern regions of Australia, including its coastal islands and Tasmania. These snakes are highly variable in their colour, often banded like those on a tiger and forms in their regional occurrences.

All populations are in the genus Notechis and their diverse characters have been described in further subdivisions of this group; they are sometimes described as distinct species. In most Australian states, they are protected species and to kill or injure one incurs a fine of up to $7,500, as well as a jail sentence of 18 months in some states. It is also illegal to export a native Australian snake. 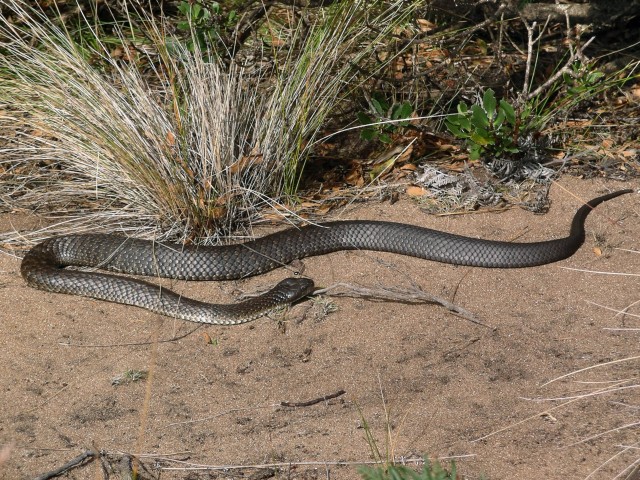 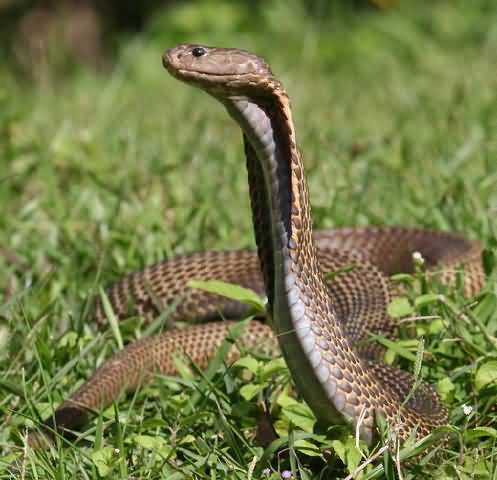 Echis is a genus of venomous vipers found in the dry regions of Africa, the Middle East, Pakistan, India, and Sri Lanka. They have a characteristic threat display, rubbing sections of their body together to produce a “sizzling” warning sound. The name Echis is a Greek word for “viper.” Their common name is “saw-scaled vipers” and they include some of the species responsible for causing the most snakebite cases and deaths in the world.

Eight species are currently recognized. Little is known about the diets of some Echis species. For others, their diets are reported to be extremely varied and may include items such as locusts, beetles, worms, slugs, spiders, scorpions, centipedes, solifugids, frogs, toads, reptiles, small mammals, and birds.