10 Popular Richest Temples In The World 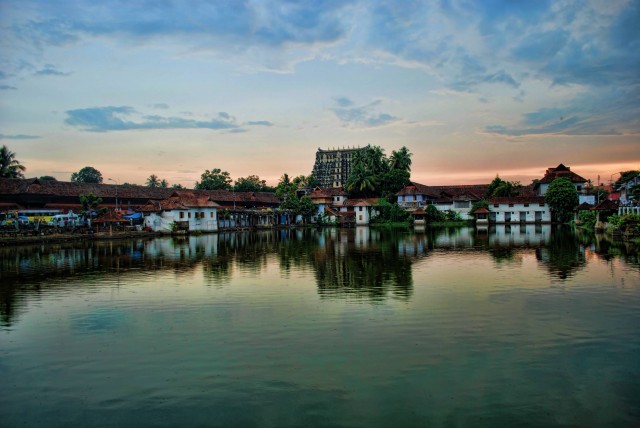 Padmanabhaswamy temple is located in Thiruvananthapuram, Kerala, India . The temple is built in Dravidian style of architecture associated with the temples located in the neighboring state of Tamil Nadu, featuring high walls and a 16th-century Gopuram. While the Moolasthanam of the temple is the Ananthapuram Temple in Kasargod, architecturally to some extent, the temple is a replica of the Adikesava Perumal temple located in Kanyakumari District.

It is the richest Hindu temple in the world. In fact, in terms of precious metals and precious stones, it is by far the wealthiest institution and place of worship of any kind in the recorded history of the world. The principal deity Vishnu is enshrined in the “Anantha Sayanam” posture, the eternal yogic sleep on the serpent Adisheshan. Sree Padmanabhaswamy is the tutelary deity of the royal family of Travancore. 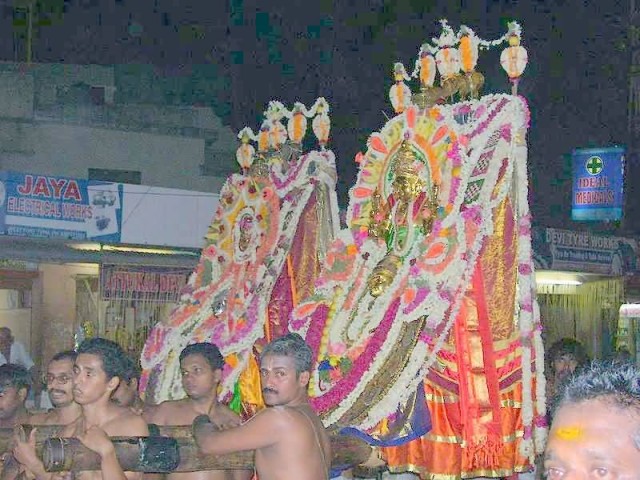 The titular Maharaja of Travancore Moolam Thirunal Rama Varma is the trustee of the temple as Sree Padmanabhadasa, the slave of Lord Padmanabha. In line with the Temple Entry Proclamation, only those who profess the Hindu faith are permitted entry to the temple and devotees have to strictly follow the dress code. 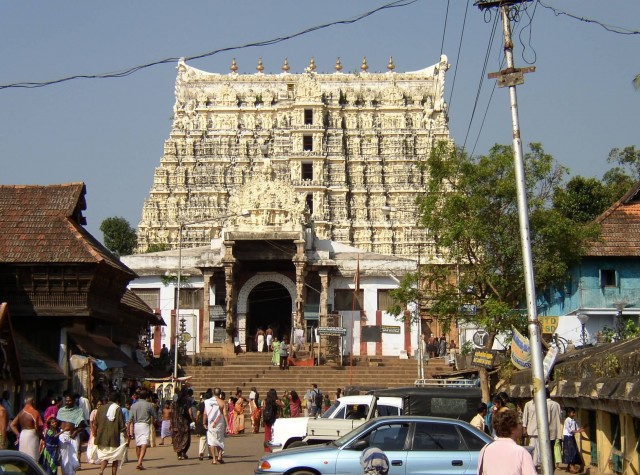 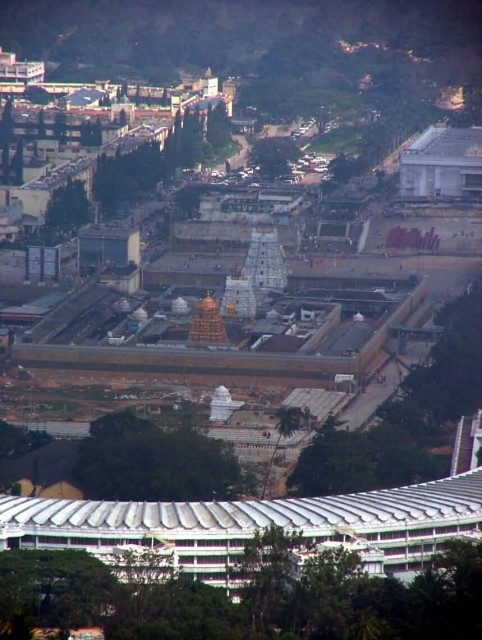 Tirumala Sri Venkateswara Temple is a famous Vedic temple in the hill town of Tirumala, near Tirupati in Chittoor district of Andhra Pradesh, India. It is the richest temple in the world in terms of donations received and wealth, and the most-visited place of worship in the world. The temple is visited by about 50,000 to 100,000 pilgrims daily. While on special occasions and festivals, like the annual Brahmotsavam, the number of pilgrims shoots up to 500,000, making it the most-visited holy place in the world.It is around 435 km from Vijayawada. 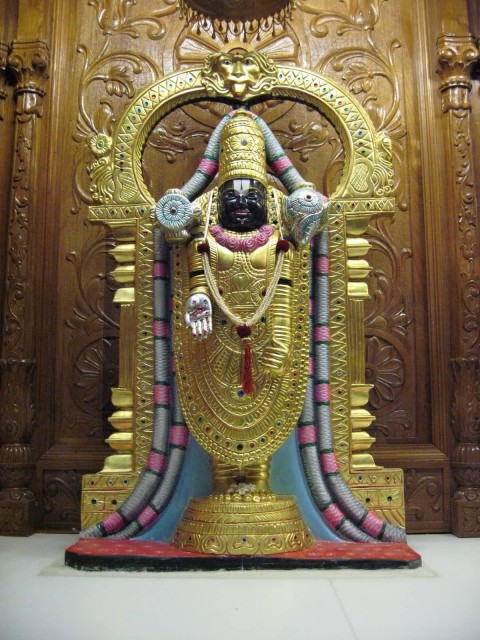 The Tirumala Hill is 853m above sea level and is about 27 km2 in area. It comprises seven peaks, representing the seven heads of Adisesha, thus earning the name Seshachalam. The seven peaks are called Seshadri, Neeladri, Garudadri, Anjanadri, Vrushabhadri, Narayanadri and Venkatadri. The temple is on Venkatadri, the seventh peak, and is also known as the “Temple of Seven Hills”. The temple is listed as 106th and the last earthly divya desam.The rich legacy of this temple are supported by Tamil and Telugu texts. There are several legends associated with the manifestation of the Lord in Tirumala. According to one legend, the temple has a murti of Lord Venkateswara, which it is believed shall remain here for the entire duration of the present Kali Yuga. Sai Baba of Shirdi (28 September 1835 – 15 October 1918; resided in Shirdi), also known as Shirdi Sai Baba, was an Indian spiritual master who was and is regarded by his devotees as a saint, fakir, and satguru, according to their individual proclivities and beliefs. He was revered by both his Hindu and Muslim devotees, and during, as well as after, his life it remained uncertain if he was a Hindu or a Muslim himself. This however was of no consequence to Sai Baba himself. Sai Baba stressed the importance of surrender to the guidance of the true Satguru or Murshid, who, having gone the path to divine consciousness himself, will lead the disciple through the jungle of spiritual training. 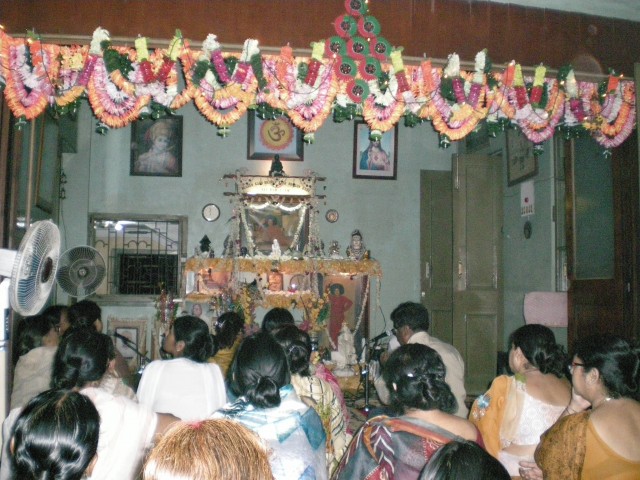 It is the richest temple in the world in terms of donations received and wealth, and the most-visited place of worship in the world. It is the 3rd richest temple in India. Sai Baba remains a very popular Master, especially in India, and is worshiped by people around the world. He had no love for perishable things and his sole concern was self-realization. He taught a moral code of love, forgiveness, helping others, charity, contentment, inner peace, and devotion to God and guru. He gave no distinction based on religion or caste. 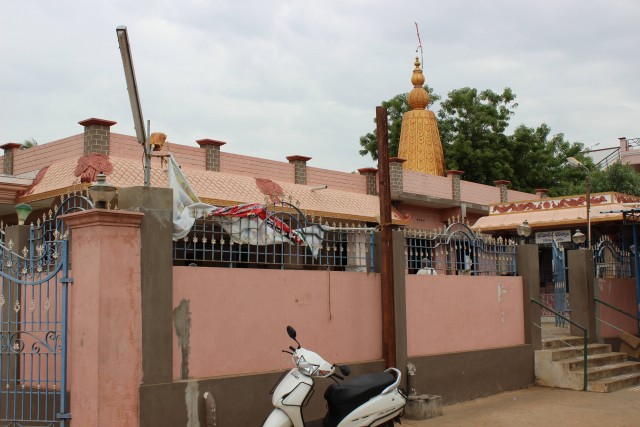 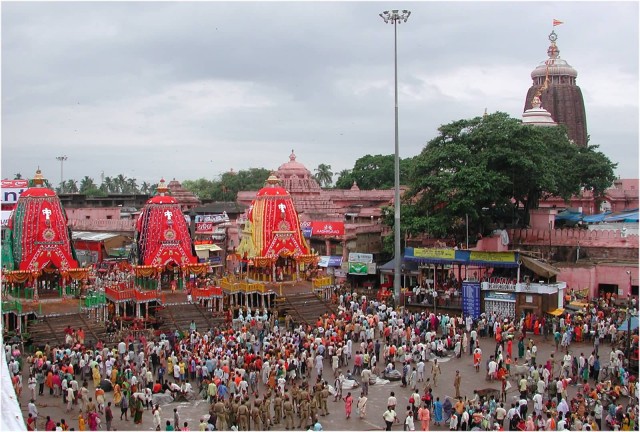 The Jagannath Temple in Puri is a famous, sacred Hindu temple dedicated to Jagannath and located on the eastern coast of India, at Puri in the state of Odisha. The temple is an important pilgrimage destination for many Hindu traditions, particularly worshippers of Krishna and Vishnu, and part of the Char Dham pilgrimages that a Hindu is expected to make in one’s lifetime. The temple was built in the 12th century a top its ruins by the progenitor of the Eastern Ganga dynasty, King Anantavarman Chodaganga Deva. 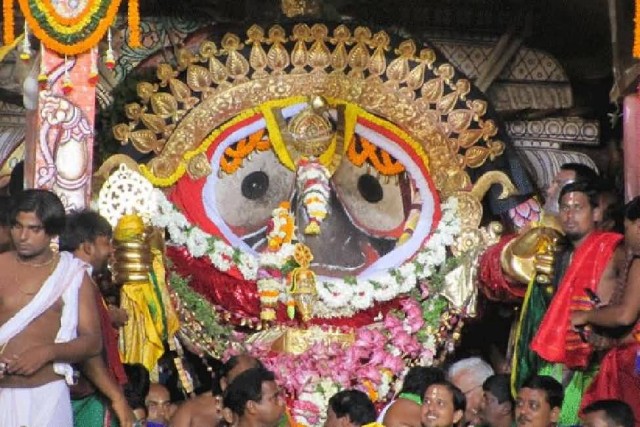 The temple is famous for its annual Rath Yatra, or chariot festival, in which the three main temple deities are hauled on huge and elaborately decorated temple cars. Since medieval times, it is also associated with intense religious fervour. It is the 4th richest temple in the world in terms of the most-visited place of worship and donations received and wealth in the world. The temple is sacred to the Vaishnava traditions and saint Ramananda who was closely associated with the temple. It is also of particular significance to the followers of the Gaudiya Vaishnavism whose founder, Chaitanya Mahaprabhu, was attracted to the deity, Jagannath, and lived in Puri for many years. 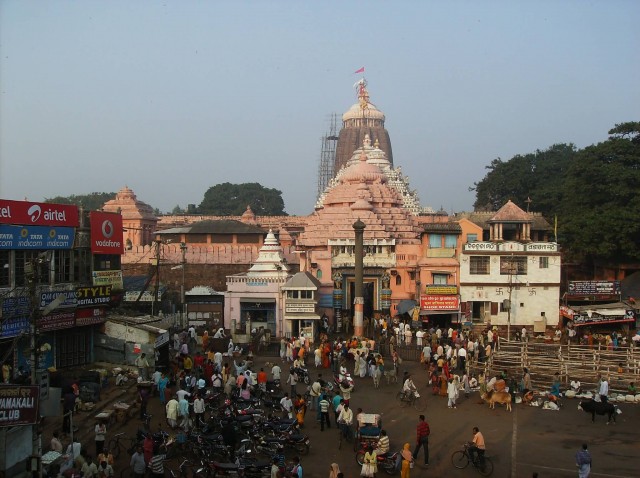 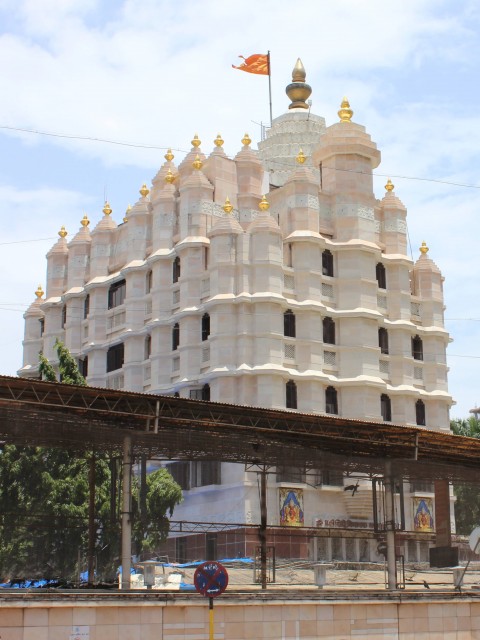 The Shree Siddhivinayak Ganapati Mandir is a Hindu temple dedicated to Lord Shri Ganesh. It is located in Prabhadevi, Mumbai, Maharashtra. It was originally built by Laxman Vithu and Deubai Patil on November 19, 1801.It is one of the richest temples in Mumbai. The temple has a small mandap with the shrine for Siddhi Vinayak. The wooden doors to the sanctum are carved with images of the Ashtavinayak. The inner roof of the sanctum is plated with gold, and the central statue is of Ganesha.

The Siddhivinayak temple receives donations of around 100 million, 150 million every year, which makes it Mumbai city’s richest temple trust. In 2004, the Siddhivinayak Ganpati Temple Trust, which operates the temple, was accused of mismanaging donations. Consequently the Bombay High Court appointed a committee headed by retired judge V P Tipnis to scrutinize the trust’s donations and probe the allegations. 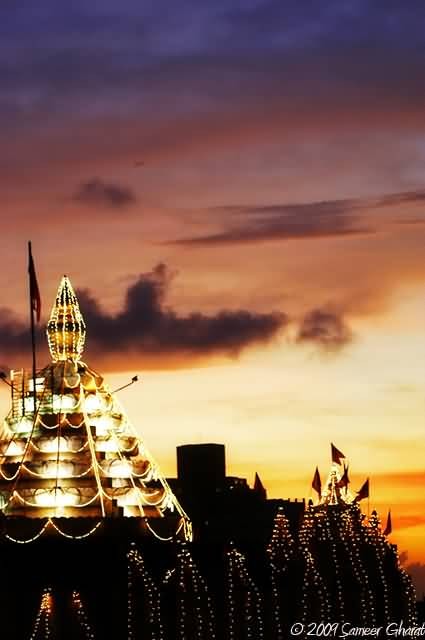 The committee reported that, “The most shocking aspect of the matter is that there is no method or principle followed for particular institutions. The only criteria for selection was recommendation or reference by trustees or the minister or a political heavy-weight, generally belonging to ruling party”. In 2006 the Bombay High Court directed the state government, the Siddhivinayak Temple Trust and the petitioner Keval Semlani to prepare “suggestive guidelines” for using the temple’s trust funds. 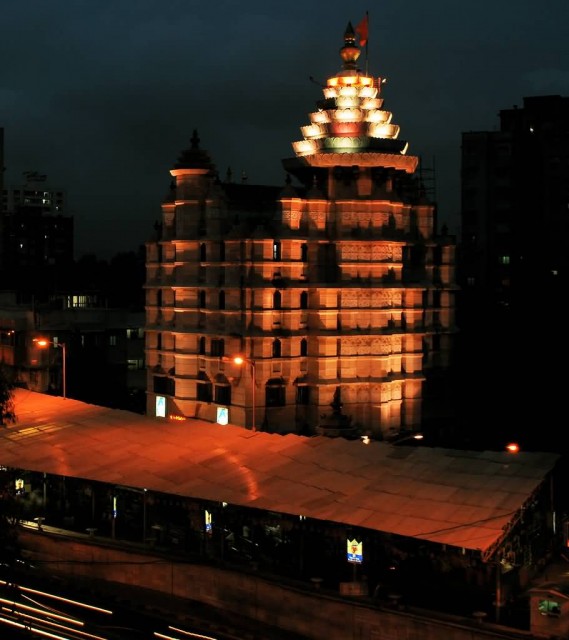 Vaishno Devi, also known as Mata Rani, Trikuta and Vaishnavi, is a manifestation of the Hindu Mother Goddess Mahalakshmi. The words “maa” and “mata” are commonly used in India for “mother”, and thus are often used in connection with Vaishno Devi. Vaishno Devi Mandir is a very popular Hindu temple dedicated to the Hindu Goddess, located at the Trikuta Mountains within the Indian state of Jammu and Kashmir. 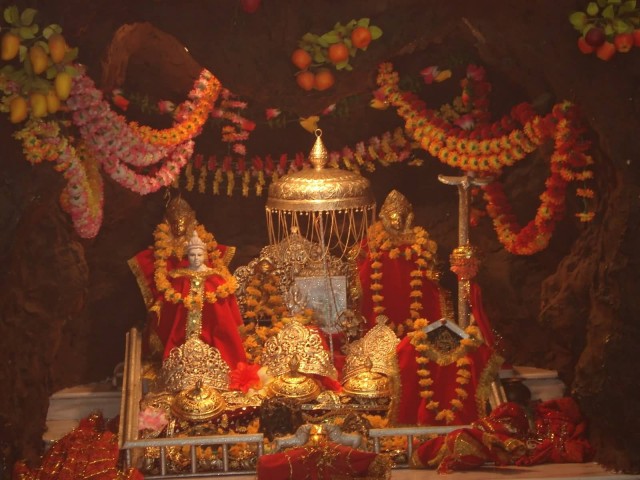 More than 10 million pilgrims visit this shrine every year. One can always donate in cash or in kind and obtain a proper receipt for the same. The Shrine Board is a non profit organization and donations help to create more and better facilities for all the visitors and are used in larger public interest. All ornaments and jewelry offerings are to be deposited in the jewelry boxes. It is the 6th richest temple in the world in terms of the most-visited place of worship and donations 0f cash, ornaments and jewelry offerings received and wealth in the world. 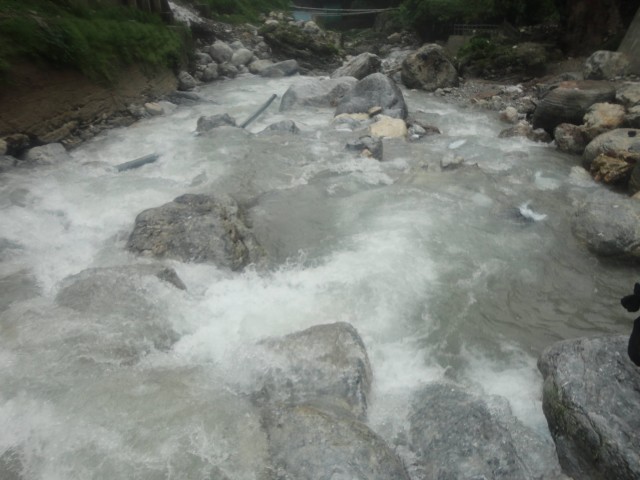 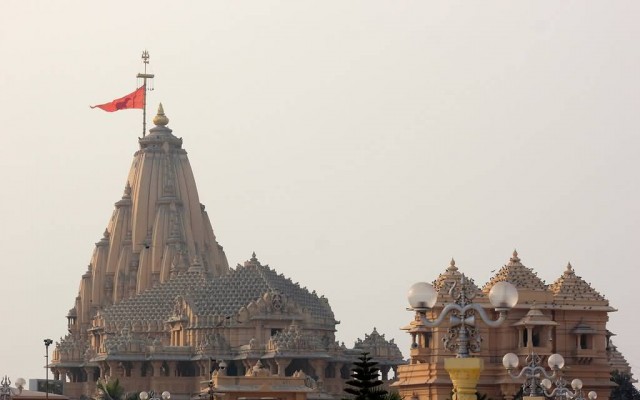 The Somnath Temple located in Prabhas Patan near Veraval in Saurashtra on the western coast of Gujarat, India, is the first among the twelve Jyotirlinga shrines of Shiva. It is an important pilgrimage and tourist spot for pilgrims and tourists. The temple is considered sacred due to the various legends connected to it. Somnath means “Lord of the Soma”, an epithet of Shiva. Somnath Temple is known as “the Shrine Eternal”. 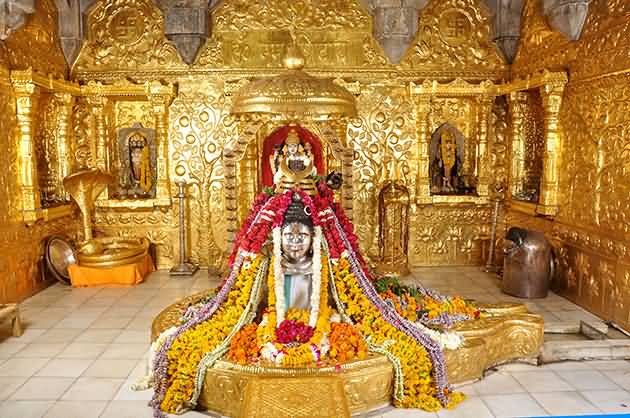 This legendary temple has been destroyed and rebuilt several times by Islamic kings and Hindu kings respectively. Most recently it was rebuilt in November 1947, when Vallabhbhai Patel visited the area for the integration of Junagadh and mooted a plan for restoration. After Patel’s death, the rebuilding continued under Kanaiyalal Maneklal Munshi, another minister of the Government of India. It is the 7th richest temple in the world in terms of donations received and wealth, and the most-visited place of worship in the world. 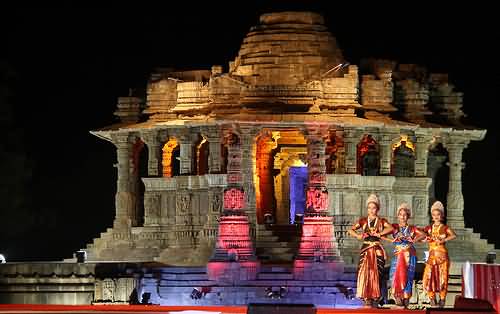 Meenakshi Amman Temple is a historic Hindu temple located on the southern bank of the Vaigai River in the temple city of Madurai, Tamil Nadu, India. It is dedicated to Parvati, known as Meenakshi, and her consort, Shiva, here named Sundareswarar. The temple forms the heart and lifeline of the 2,500 year old city of Madurai and is a significant symbol for the Tamil people, mentioned since antiquity in Tamil literature though the present structure was built between 1623 and 1655 CE.

It houses 14 gopurams, ranging from 45–50m in height. The tallest is the southern tower, 51.9 m high, and two golden sculptured vimanas, the shrines over the garbhagrihas of the main deities. The temple attracts 15,000 visitors a day, around 25,000 on Fridays, and receives an annual revenue of sixty million. It is the 8th richest temple in the world in terms of the most-visited place of worship and donations 0f cash, ornaments and jewelry offerings received and wealth in the world. It is most famous temple in Tamil Nadu and also in south India. There are an estimated 33,000 sculptures in the temple. It was on the list of top 30 nominees for the “New Seven Wonders of the World”. The temple is the most prominent landmark and most visited tourist attraction in the city. The annual 10-day Meenakshi Tirukalyanam festival, celebrated during April and May, attracts 1 million visitors. 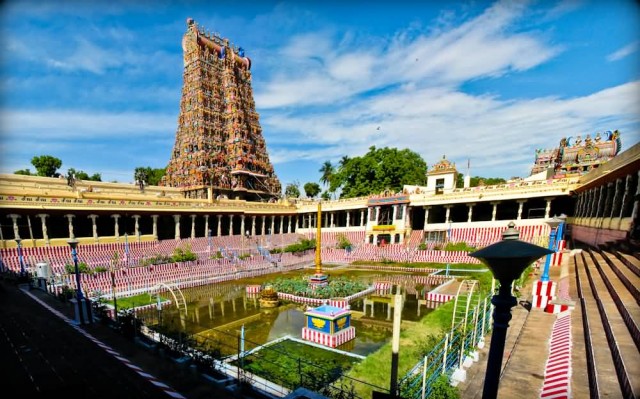 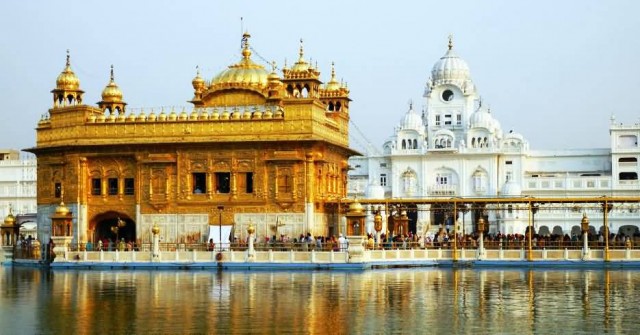 The Harmandir Sahib and informally referred to as the “Golden Temple”, is the holiest Sikh gurdwara located in the city of Amritsar, Punjab, India. The city was founded in 1574 by the fourth Sikh guru, Guru Ram Das. The Harmandir Sahib was designed by the fifth guru, Guru Arjan, who had the cornerstone laid by the Muslim Sufi saint Sai Hazrat Mian Mir on 28 December 1588. Guru Arjan completed the Adi Granth, the holy scripture of Sikhism, in 1604 and installed it in the gurdwara.

The Harimandir Sahib is considered holy by Sikhs. The holiest text of Sikhism, the Guru Granth Sahib, is always present inside the gurdwara. Its construction was mainly intended to build a place of worship for men and women from all walks of life and all religions to come and worship God equally. Over 100,000 people visit the holy shrine daily for worship. It is 9th richest temple in the world. The temple receives donations of around million every year, which makes it Punjab city’s richest temple trust Kashi Vishwanath Temple is one of the most famous Hindu temples and is dedicated to Lord Shiva. It is located in Varanasi, Uttar Pradesh, India, the holiest existing place of Hindus. The temple stands on the western bank of the holy river Ganga, and is one of the twelve Jyotirlingas, the holiest of Shiva temples. The main deity is known by the name Vishwanatha or Vishweshwara meaning Ruler of the universe. The temple town, which claims to be the oldest living city in the world, with 3500 years of documented history, is also called Kashi and hence the temple is popularly called Kashi Vishwanath Temple. It is the 10th richest temple in the world in terms of donations received and wealth, and the most-visited place of worship in the world.