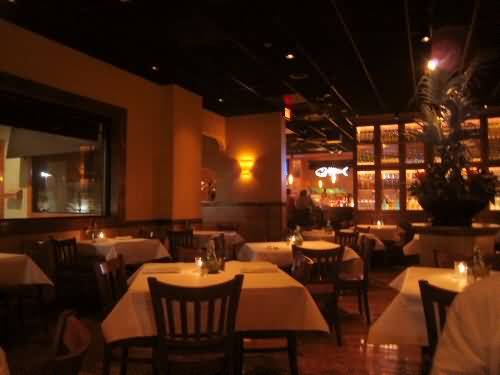 The company is experimenting with full lunch service in some markets with specific lunch items not found on the dinner menu. Their menu focuses largely on wood-grilled fish. The specials change every couple of months so there is always something new to try. The bar is fully stocked and there are many different drinks and those specials also change every couple of months. They are most recognized for their Bang Bang Shrimp’ appetizer, which consists of shrimp in a creamy spicy sauce. The restaurant has a marina on the bay. Indoor and outdoor dining is available year round. On a clear day, patrons can see the New York Skyline and Verrazano-Narrows Bridge across the Sandy Hook Bay and Raritan Bay. The Highlands-Sea Bright Bridge, which carries Route 36, is nearby the restaurant. 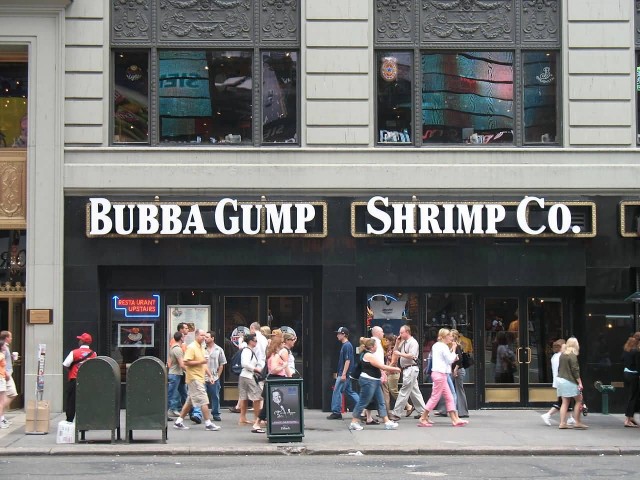 The Bubba Gump Shrimp Company Restaurant and Market is a seafood restaurant chain inspired by the 1994 film Forrest Gump. As of September 2014, forty-three Bubba Gump Shrimp Co. restaurants operate worldwide. Twenty-nine of these locations are in the United States, four are in Mexico, three are in Malaysia and one each in London, Hong Kong, Indonesia and the Philippines. Like the name suggests, Bubba Gump Shrimp Co.’s menu consists mostly of shrimp dishes and other seafood, as well as Southern and Cajun cuisine. The restaurant offers dishes named after characters in the movie, like Jenny’s Catch and the restaurant’s bestseller Forrest’s Seafood Feast. Restaurant display movie memorabilia throughout the restaurant. Guests can play Forrest Gump movie trivia and can signal their waiter with a “Stop, Forrest, Stop” sign. Bubba Gump Shrimp Co. also has a children’s menu. Captain D’s is a U.S.-based chain of fast-casual restaurants, specializing in seafood and fish and chips. The restaurant also features a low-carbohydrate menu. The restaurant chain’s headquarters is located in Nashville, Tennessee. Its main competitors are Long John Silver’s and Arthur Treacher’s. The first Captain D’s restaurant opened in Donelson, Tennessee, on August 15, 1969 under the name “Mr. D’s”.

The “D” is the initial of the last name of the co-founder, Ray Danner. Captain D’s Seafood has won the 2007 Nation’s Restaurant News “MenuMasters Award” in the category of “Best Menu Revamp”. The success has also brought about a renewed interested in franchising, as existing and new Captain D’s franchisees have begun opening new restaurants. Long John Silver’s, Inc. is a United States-based fast-food restaurant that specializes in seafood. The name of the brand is borrowed from the novel Treasure Island by Robert Louis Stevenson, in which the pirate “Long John” Silver is one of the main characters.

More recently, the brand began offering baked cod as a lower-calorie option. The restaurants also sell dessert offerings as separate items. Customers also have the option to “add a piece”, which the company promotes in its advertising and on its website. Arthur Treacher’s Fish and Chips is a fast food seafood restaurant chain. At the peak of its popularity in the late 1970s, it had about 800 stores. As of 2015, following the closure of the sole Virginia location, there are 14 remaining, all but one in New York and Ohio. Most locations have been co-branded with Nathan’s Famous. The menu offers fried seafood or chicken, accompanied by chips. Its main competitors are Long John Silver’s and Captain D’s. The Jacob Wirth Restaurant is a historic German-American restaurant and bar in Boston, Massachusetts at 31-39 Stuart Street. Founded in 1868, Jacob Wirth is one of the oldest restaurants in Boston. The Greek Revival building housing the restaurant was constructed in 1844.

The German style restaurant was founded in 1868 and is the second oldest continuously operating restaurant in the city after the Union Oyster House. The restaurant was added to the National Register of Historic Places in 1980. Jacob Wirth was the first distributor of Anheuser Busch products. The Wirth family and Anheuser family are from the same small town in Germany. Jake’s Famous Crawfish is a seafood restaurant in downtown Portland, Oregon, founded in 1892 by Jacob “Jake” Lewis Freiman. The building currently housing the restaurant was completed in 1910. This restaurant was one of two crawfish houses in Portland at the turn of the century. In 1972, William “Bill” McCormick purchased Jake’s Famous Crawfish and hired Doug Schmick as his manager. Several years later, the pair formed a partnership that would later become the restaurant chain McCormick & Schmick’s.

The building that has housed the restaurant since 1911 was added to the U.S. National Register of Historic Places in 1983, as the Whitney & Gray Building and Jake’s Famous Crawfish Restaurant. Rachel Dresbeck described the restaurant as having a “turn-of-the-last-century ambiance, with its maze of booths snug against brick walls, its antique oil paintings, deep wood paneling, beautiful bar and crisp white linen”. Sam Woo Restaurant is a restaurant chain that serves Hong Kong-style cuisine. It has many locations in predominantly overseas Chinese communities of Southern California, in Las Vegas and in the suburbs of Toronto. There are two types of Sam Woo restaurants. The first is aptly named Sam Woo BBQ Restaurant. It offers a delicatessen with roast duck, soy sauce chicken, BBQ pork, suckling pig, roast pig, congee, yang chow fried rice on its menu.

You can order take-out and cash is the only accepted payment. The second, Sam Woo Seafood Restaurant is an upscale restaurant that serves dim sum and Cantonese-style seafood dishes, such as lobster. The seafood restaurants have large dining rooms and can typically handle banquets for parties, weddings, reunions and other special events. These restaurants take credit cards. Spenger’s Fresh Fish Grotto is a restaurant located in Berkeley, California at 1919 4th Street. The restaurant was designated as a landmark in 2001 by the City of Berkeley. A plaque was formally installed at the entrance to the restaurant in 2004. Johann Spenger’s son Frank Spenger opened a full-service restaurant on the ground floor of the original building in the 1930s.

Eventually, dining rooms and bars were added as part of the expansion process as popularity of the restaurant grew. Celebrities enjoyed dining at Spenger’s along with local residents. Frank Spenger was also a fisherman. Frank’s son, Frank “Buddy” Spenger was the family member who really made the restaurant famous. Atlantic Grill is a seafood restaurant located at 1341 Third Avenue (between East 76th Street and East 77th Street) on the Upper East Side in New York City. The 220-seat restaurant opened in 1998. It specializes in fish dishes and is noted for its by-the-glass wine list. The restaurant’s wood and chrome bar is lined with photographs by Jacques-Henri Lartigue of the French Riviera.

The main dining room has brown velour Hollywood booths and ecru chairs. The restaurant is owned by Steven Hudson. It is a sister restaurant of New York City’s 160-seat Ocean Grill on the Upper West Side and Blue Water Grill on Union Square. In 2013, Zagat gave it a rating of 23 for food.