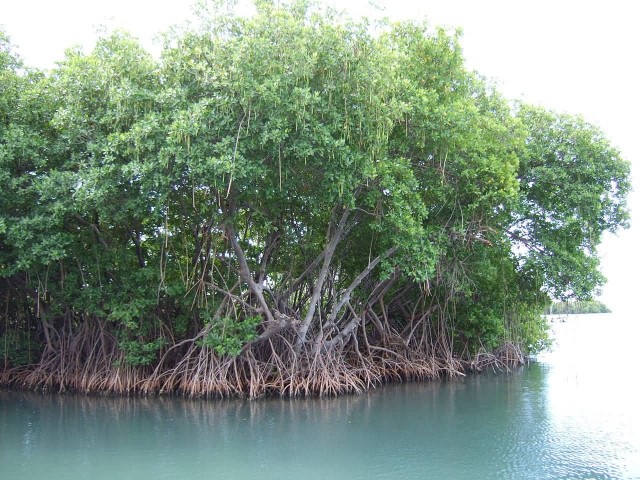 The greatest number of known species of marine fungi are from mangrove swamps. In one study blocks of mangrove timber and pieces of driftwood of Avicennia alba, Bruguiera cylindrica and Rhizophora apiculata were examined to identify the lignicolous fungi they hosted. Also tested were Nypa fruticans, a mangrove palm and Acanthus ilicifolius, a plant often associated with mangroves. Each material was found to have its own characteristic fungi the greatest diversity being among those growing on the mangrove palm. 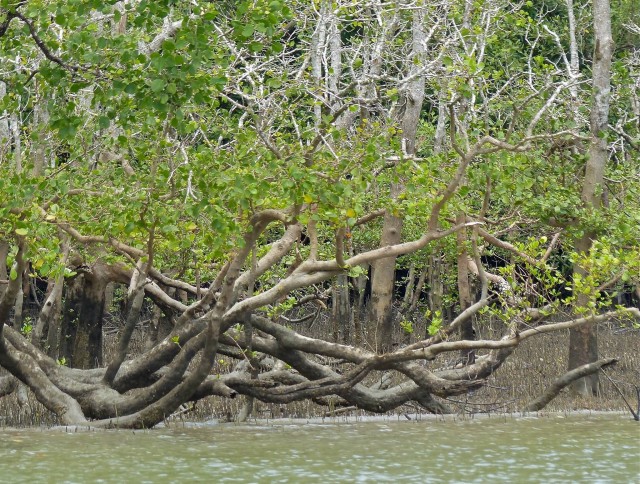 It was surmised that this was because the salinity was lower in the estuaries and creeks where Nypa grew and so it required a lesser degree of adaptation for the fungi to flourish there. Some of these species were closely related to fungi on terrestrial palms. Other studies have shown that driftwood hosts more species of fungus than do exposed test blocks of timber of a similar kind. The mangrove leaf litter also supported a large fungal community which was different from that on the timber and living material. However few of these were multicellular, higher marine fungi. Many marine fungi are very specific as to which species of floating and submerged timbers they colonise. A range of species of fungi colonise beech while oak supports a different community. When a fungal propagule lands on a suitable piece of timber it will grow if no other fungi are present. If the log is already colonised by another fungal species growth will depend on whether that fungus produces antifungal chemicals and whether the new arrival can resist them. The chemical properties of colonizing fungi also affect the animal communities that graze on them in one study when hyphae from five different species of marine fungi were fed to nematodes one species supported less than half the number of nematodes per mg of hyphae than did the others. Detection of fungi in timber may involve incubation at a suitable temperature in a suitable water medium for a period of six months to upward of eighteen months. Rhyzophydium littoreum is a marine chytrid a primitive fungus that infects green algae in estuaries. It obtains nutrients from the host alga and produces swimming zoo spores that must survive in open water a low nutrient environment until a new host is encountered. A species of Fusarium isolated from a seaweed has been shown to contain a chemical that seems to have cytogenic anti-cancer effects. Another fungus, Ascochyta salicorniae found growing on seaweed is being investigated for its action against malaria a mosquito-borne infectious disease of humans and other animals. Lichens are mutualistic associations between a fungus usually an ascomycete and an alga or a cyanobacterium. Several lichens including Arthopyrenia halodytes, Pharcidia laminariicola, Pharcidia rhachiana and Turgidosculum ulvae are found in marine environments. Many more occur in the splash zone where they occupy different vertical zones depending on how tolerant they are to submersion. Fossil marine lichens 600 million years old have been discovered in the late Neoproterozoic marine phosphate rocks in the sedimentary fossil-rich Doushantuo Formation in China. Whales, porpoises and dolphins are susceptible to fungal diseases but these have been little researched in the field. Mortalities from fungal disease have been reported in captive killer whales it is thought that stress due to captive conditions may have been predisposing. Transmission among animals in the open sea may naturally limit the spread of fungal diseases. Infectious fungi known from killer whales include Aspergillus fumigatus, Candida albicans and Saksenaea vasiformis. A cellular response by the fish aims to isolate the fungus by walling it off. Fish are also susceptible to fungus-like oomycetes including Branchiomyces which affects the gills of various fishes and Saprolegnia which attacks damaged tissue. The American lobster like many other marine crustaceans incubates its eggs beneath its tail segments. Here they are exposed to water-borne micro-organisms including fungi during their long period of development. The lobster has a symbiotic relationship with a gram-negative bacterium that has anti-fungal properties. This bacterium grows over the eggs and protects them from infection by the pathogenic fungus-like oomycete Lagenidium callinectes. The metabolite produced by the bacterium is tyrosol a 4-hydroxyphenethyl alcohol an antibiotic substance also produced by some terrestrial fungi. Similarly a shrimp found in estuaries Palaemon macrodactylis has a symbiotic bacterium that produces 2,3-indolenedione a substance that is also toxic to the oomycete Lagenidium callinectes.