10 Beautiful Palaces In The World

The Pena National Palace is a Romanticist palace in São Pedro de Penaferrim in the municipality of Sintra, Portugal. The palace stands on the top of a hill above the town of Sintra and on a clear day it can be easily seen from Lisbon and much of its metropolitan area. It is a national monument and constitutes one of the major expressions of 19th-century Romanticism in the world. 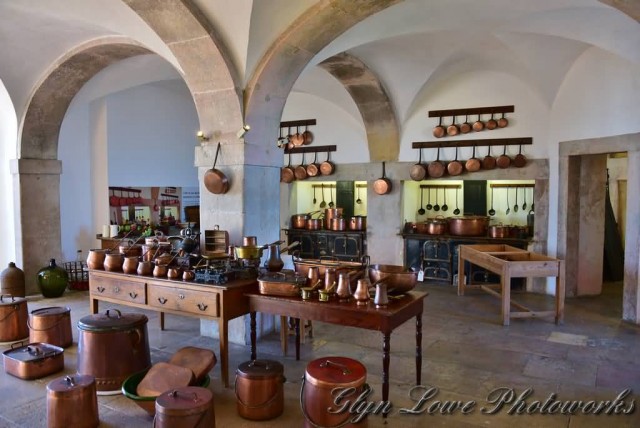 The palace is a UNESCO World Heritage Site and one of the Seven Wonders of Portugal. It is also used for state occasions by the President of the Portuguese Republic and other government officials. The interiors of the Pena Palace were adapted to serve as the Summer residence of the royal family. It has amazing stuccos, painted walls in trompe-l’oeil and various revetments in tile from the 19th century, forming part of the numerous royal collections. 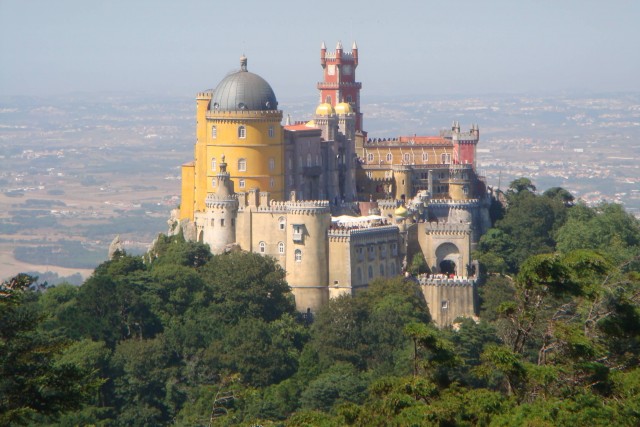 The Palace of Mysore is a historical palace in the city of Mysore in Karnataka, southern India. It is the official residence and seat of the Wodeyars the Maharajas of Mysore, the former royal family of Mysore, who ruled the princely state of Mysore from 1350 to 1950. The palace houses two durbar halls and incorporates a mesmerizing and gigantic array of courtyards, gardens and buildings. 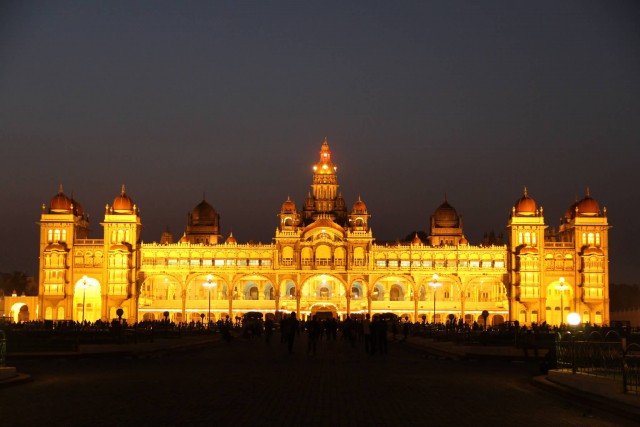 The palace is in the central region of inner Mysore, facing the Chamundi Hills eastward. Mysore is commonly described as the City of Palaces. There are about seven palaces inclusive of this; however, Mysore Palace refers specifically to the one within the Old Fort. Built by the Maharaja Rajarshi His highness Krishnarajendra Wadiyar IV, Mysore Palace is now one of the most famous tourist attractions in India, after the Taj Mahal and has more than 6 million visitors annually. 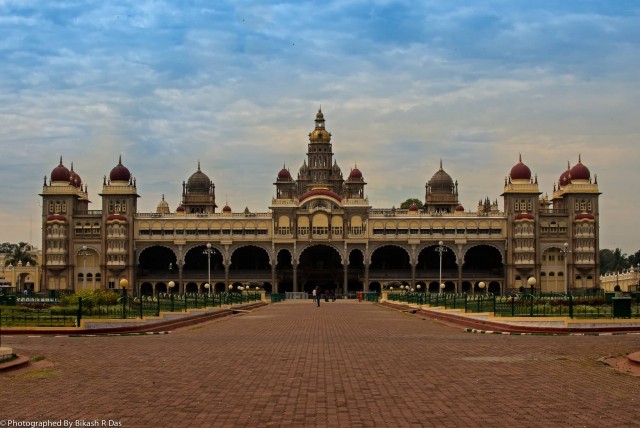 Schönbrunn Palace is a former imperial summer residence located in Vienna, Austria. The 1,441-room Baroque palace is one of the most important architectural, cultural and historical monuments in the country. Since the mid-1950s it has been a major tourist attraction. 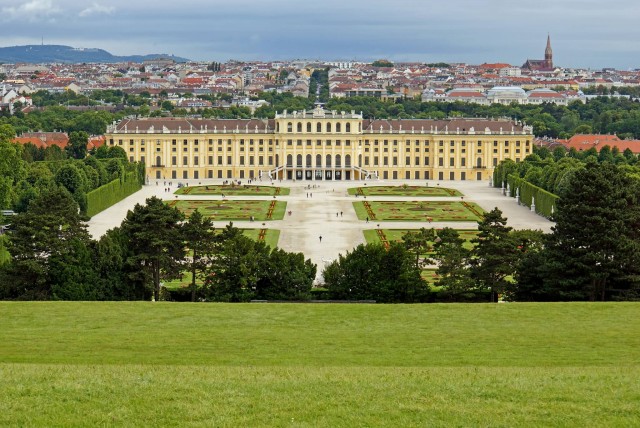 The history of the palace and its vast gardens spans over 300 years, reflecting the changing tastes, interests and aspirations of successive Habsburg monarchs. The palace was recently selected as the main motif of a high value commemorative coin: the Austrian 10-euro. The Palace of Schönbrunn silver coin, minted on October 8, 2003. The obverse shows the central part of the frontage of the palace behind one of the great fountains in the open space. 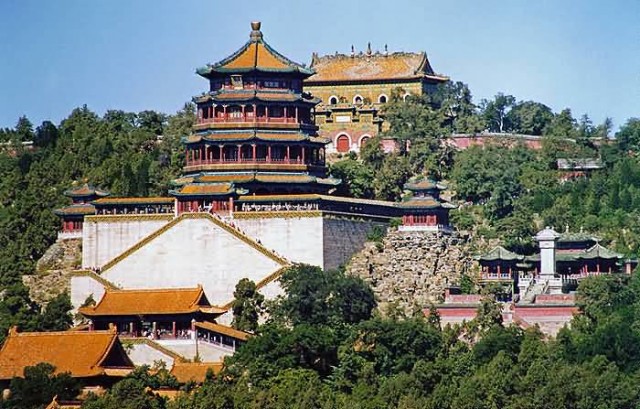 The front hill is rich with splendid halls and pavilions, while the back hill, in sharp contrast, is quiet with natural beauty. The central Kunming Lake covering 2.2 square km was entirely man-made and the excavated soil was used to build Longevity Hill. In the Summer Palace, one finds a variety of palaces, gardens and other classical-style architectural structures. 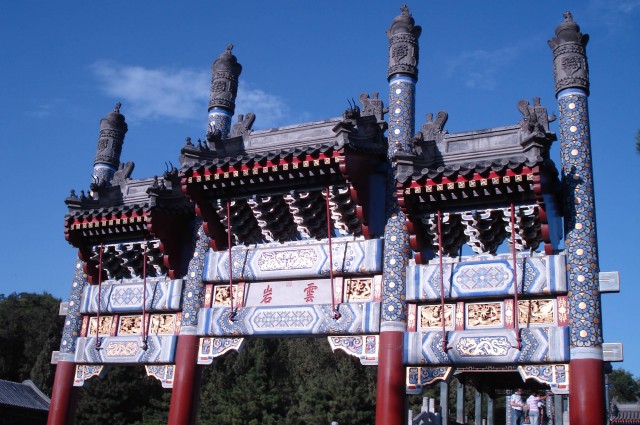 In December 1998, UNESCO included the Summer Palace on its World Heritage List. It declared the Summer Palace “a masterpiece of Chinese landscape garden design. The natural landscape of hills and open water is combined with artificial features such as pavilions, halls, palaces, temples and bridges to form a harmonious ensemble of outstanding aesthetic value.” It is a popular tourist destination but also serves as a recreational park. 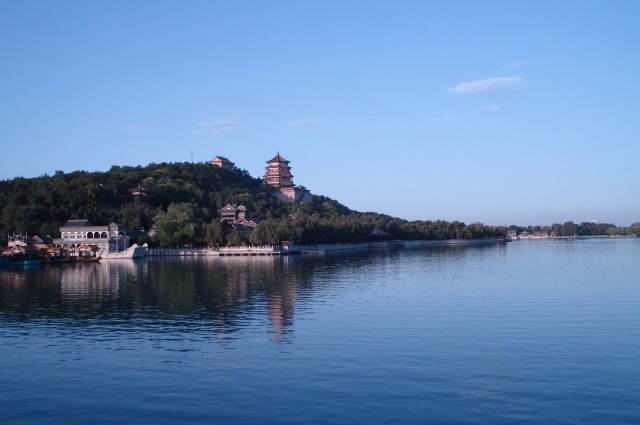 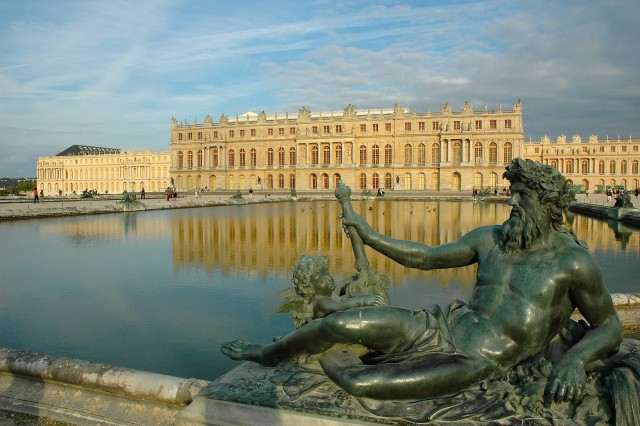 The Palace of Versailles or simply Versailles is a royal château in Versailles in the Île-de-France region of France. In French, it is known as the Château de Versailles. When the château was built, Versailles was a country village; today, however, it is a wealthy suburb of Paris, some 20 km southwest of the French capital.

The court of Versailles was the center of political power in France from 1682, when Louis XIV moved from Paris, until the royal family was forced to return to the capital in October 1789 after the beginning of the French Revolution. Versailles is therefore famous not only as a building but as a symbol of the system of absolute monarchy of the Ancien Régime.

The royal Château de Chambord at Chambord, Loir-et-Cher, France, is one of the most recognizable châteaux in the world because of its very distinctive French Renaissance architecture which blends traditional French medieval forms with classical Renaissance structures. The building, which was never completed, was constructed by King Francis I of France. Chambord is the largest château in the Loire Valley; it was built to serve as a hunting lodge for Francis I, who maintained his royal residences at the châteaux of Blois and Amboise.

The original design of the Château de Chambord is attributed, though with some doubt to Domenico da Cortona; Leonardo da Vinci may also have been involved. Chambord was altered considerably during the twenty-eight years of its construction (1519–1547), during which it was overseen on-site by Pierre Nepveu. With the château nearing completion, Francis showed off his enormous symbol of wealth and power by hosting his old archrival, Emperor Charles V, at Chambord. 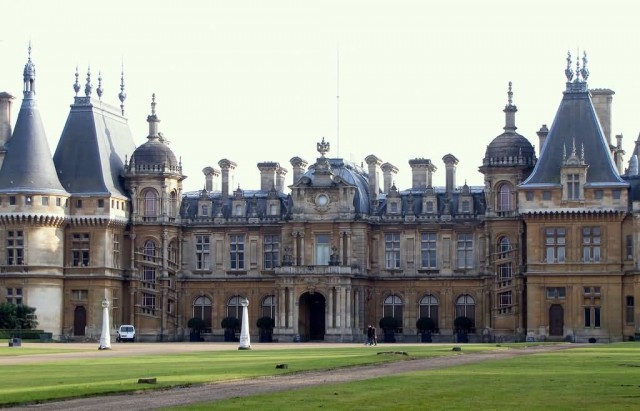 In 1792, in the wake of the French Revolution, some of the furnishings were sold and timber removed. For a time the building was left abandoned, though in the 19th century some attempts were made at restoration. During the Second World War, art works from the collections of the Louvre and the Château de Compiègne were moved to the Château de Chambord. The château is now open to the public, receiving 700,000 visitors in 2007. 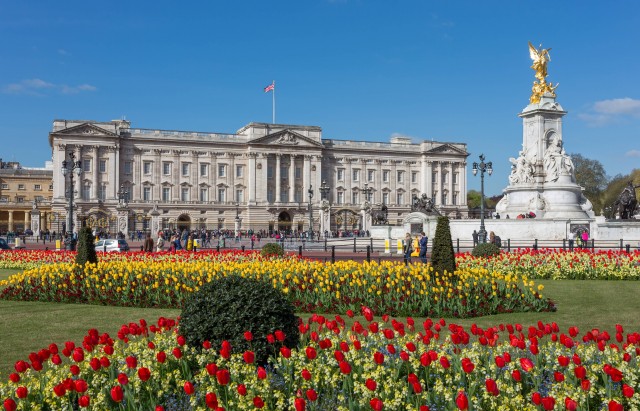 Buckingham Palace is the London residence and principal workplace of the monarchy of the United Kingdom. Located in the City of Westminster, the palace is often at the centre of state occasions and royal hospitality. It has been a focus for the British people at times of national rejoicing. The original early 19th-century interior designs, many of which still survive, included widespread use of brightly coloured scagliola and blue and pink lapis on the advice of Sir Charles Long. 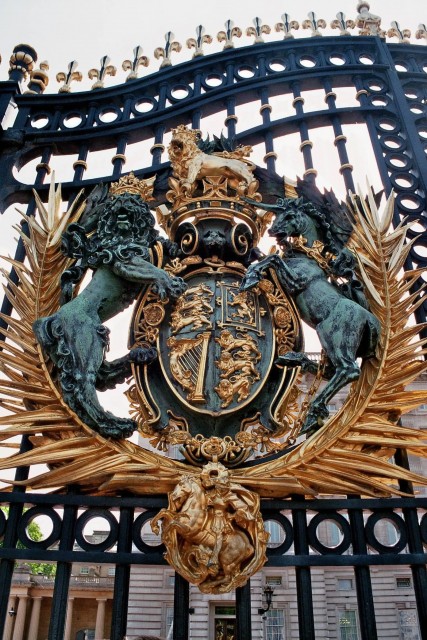 King Edward VII oversaw a partial redecoration in a Belle Époque cream and gold colour scheme. Many smaller reception rooms are furnished in the Chinese regency style with furniture and fittings brought from the Royal Pavilion at Brighton and from Carlton House. The Buckingham Palace Garden is the largest private garden in London. The state rooms used for official and state entertaining are open to the public each year for most of August and September, as part of the Palace’s Summer Opening. 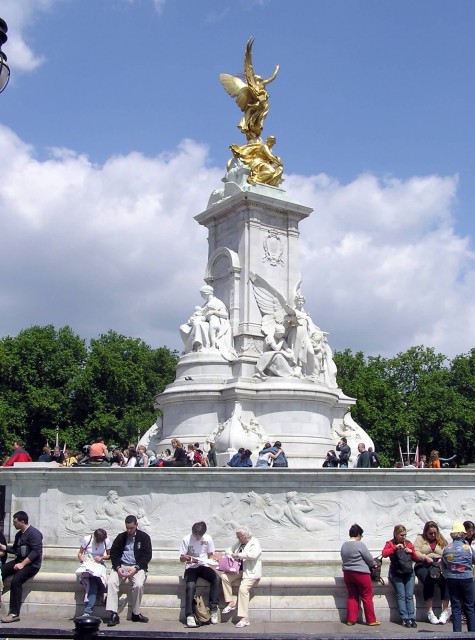 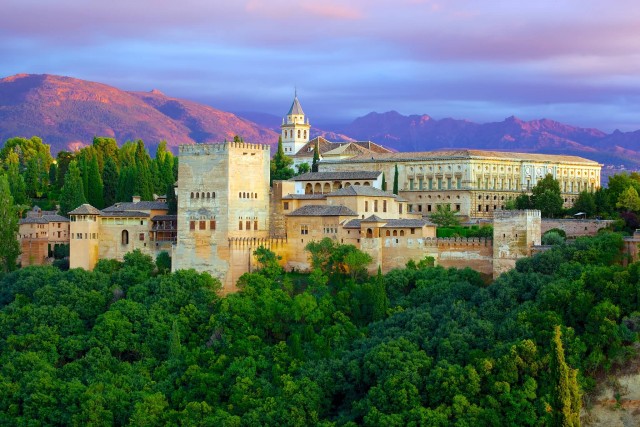 Alhambra the complete form of which was Calat Alhamra is a palace and fortress complex located in Granada, Andalusia, Spain. It was originally constructed as a small fortress in 889 and then largely ignored until its ruins were renovated and rebuilt in the mid-11th century by the Moorish emir Mohammed ben Al-Ahmar of the Emirate of Granada who built its current palace and walls. It was converted into a royal palace in 1333 by Yusuf I, Sultan of Granada. Alhambra endures as an atypical example of Muslim art in its final European stages, relatively uninfluenced by the direct Byzantine influences found in the Mezquita of Córdoba. 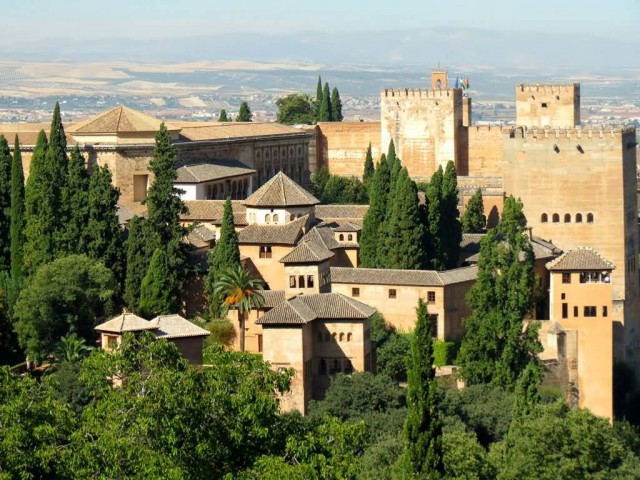 The decoration consists, as a rule, of Arabic inscriptions that are manipulated into geometrical patterns wrought into arabesques. Painted tiles are largely used as panelling for the walls. The palace complex is designed in the Mudéjar style, which is characteristic of western elements reinterpreted into Islamic forms and widely popular during the Reconquista, the reconquest of the Iberian Peninsula from the Muslims by the Christian kingdoms. 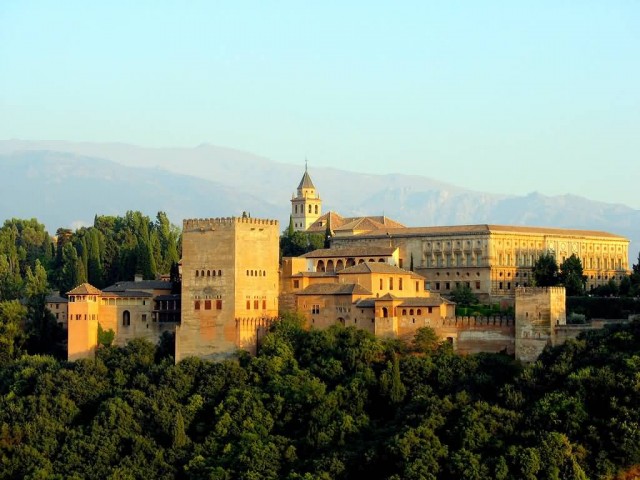 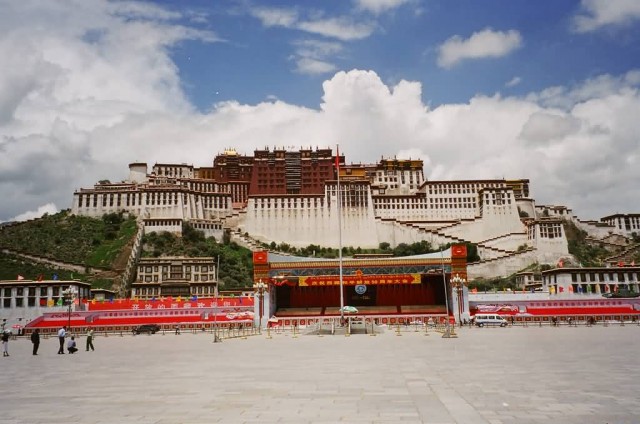 The Potala Palace in Lhasa, Tibet Autonomous Region was the chief residence of the Dalai Lama until the 14th Dalai Lama fled to India during the 1959 Tibetan uprising. It is now a museum and World Heritage Site. The palace is named after Mount Potalaka, the mythical abode of the bodhisattva Avalokiteśvara.

The 5th Dalai Lama started its construction in 1645 after one of his spiritual advisers, Konchog Chophel (died 1646), pointed out that the site was ideal as a seat of government, situated as it is between Drepung and Sera monasteries and the old city of Lhasa. It may overlay the remains of an earlier fortress called the White or Red Palace, on the site built by Songtsän Gampo in 637. The building measures 400 metres east-west and 350 metres north-south, with sloping stone walls averaging 3 m. thick, and 5 m. thick at the base, and with copper poured into the foundations to help proof it against earthquakes. 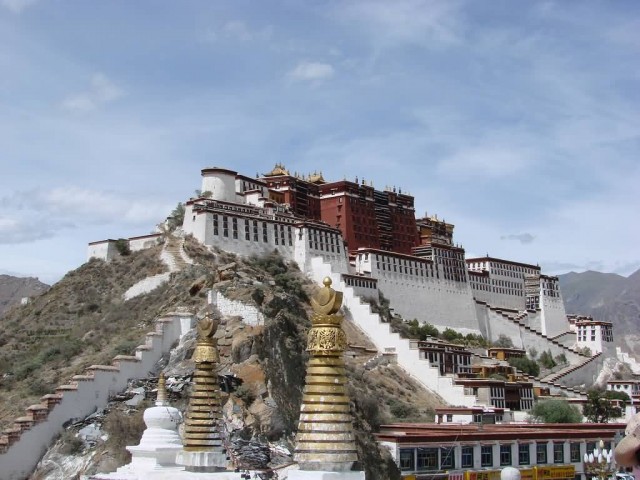 Thirteen stories of buildings containing over 1,000 rooms, 10,000 shrines and about 200,000 statues soar 117 m. on top of Marpo Ri, the “Red Hill”, rising more than 300 m in total above the valley floor. Tradition has it that the three main hills of Lhasa represent the “Three Protectors of Tibet”. Chokpori, just to the south of the Potala, is the soul-mountain of Vajrapani, Pongwari that of Manjusri and Marpori, the hill on which the Potala stands, represents Avalokiteśvara. 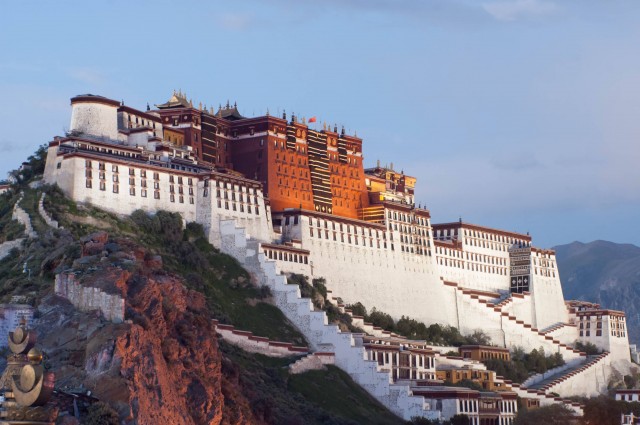 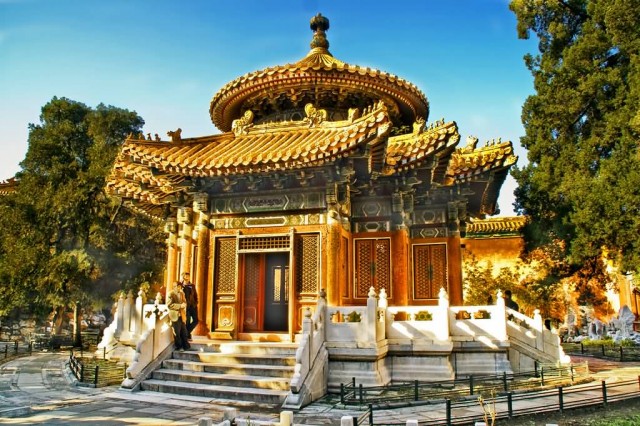 The Forbidden City was the Chinese imperial palace from the Ming dynasty to the end of the Qing dynasty. It is located in the center of Beijing, China and now houses the Palace Museum. It served as the home of emperors and their households as well as the ceremonial and political center of Chinese government for almost 500 years.

Built in 1406 to 1420, the complex consists of 980 buildings and covers 72 ha. The palace complex exemplifies traditional Chinese palatial architecture and has influenced cultural and architectural developments in East Asia and elsewhere. The Forbidden City was declared a World Heritage Site in 1987 and is listed by UNESCO as the largest collection of preserved ancient wooden structures in the world. 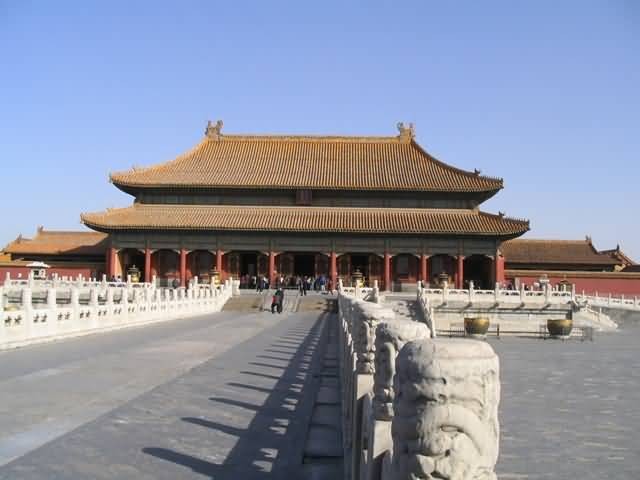 Since 1925, the Forbidden City has been under the charge of the Palace Museum, whose extensive collection of artwork and artifacts were built upon the imperial collections of the Ming and Qing dynasties. Part of the museum’s former collection is now located in the National Palace Museum in Taipei. Both museums descend from the same institution but were split after the Chinese Civil War. 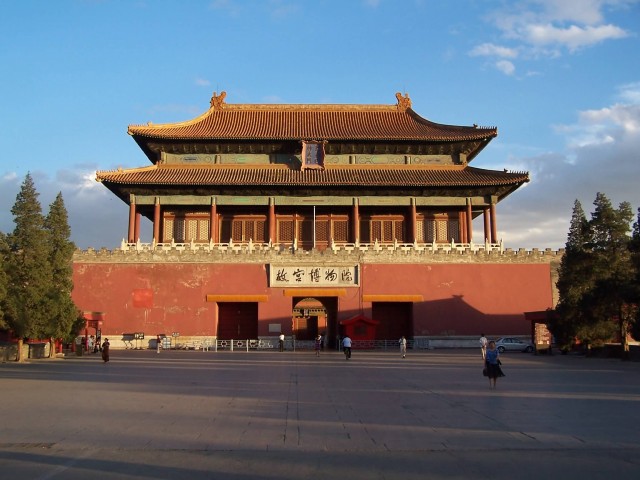