Various Kinds Of Rainbows Observed In The Sky 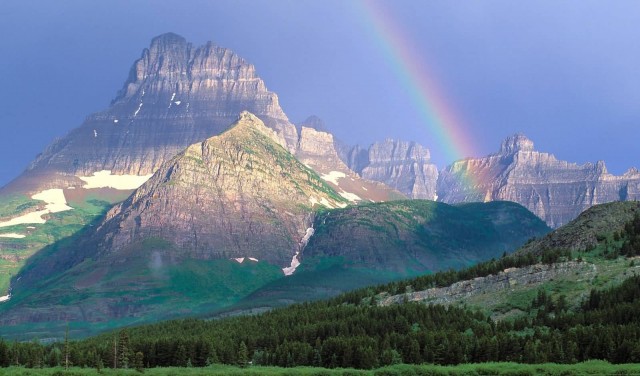 Double rainbow is caused by a double reflection of sunlight inside the raindrops and are centered on the sun itself. They are about 127° (violet) to 130° (red) wide. Since this is more than 90°, they are seen on the same side of the sky as the primary rainbow, about 10° above it at apparent angles of 50–53°. As a result of the “inside” of the secondary bow being “up” to the observer, the colors appear reversed compared to the primary bow. 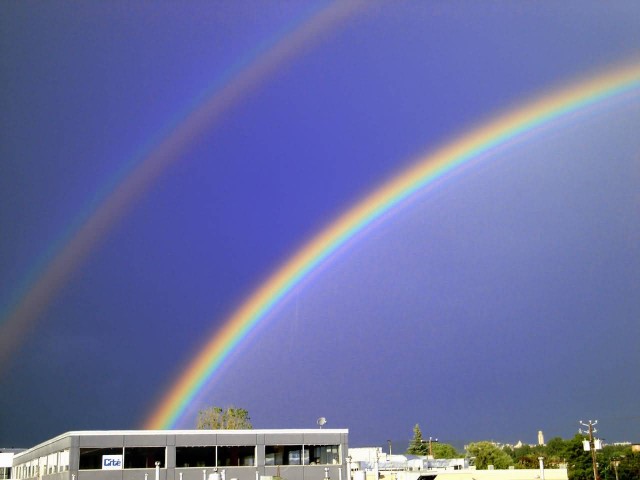 The secondary rainbow is fainter than the primary because more light escapes from two reflections compared to one and because the rainbow itself is spread over a greater area of the sky. Each rainbow reflects white light inside its colored bands, but that is “down” for the primary and “up” for the secondary. The dark area of unlit sky lying between the primary and secondary bows is called Alexander’s band, after Alexander of Aphrodisias who first described it. 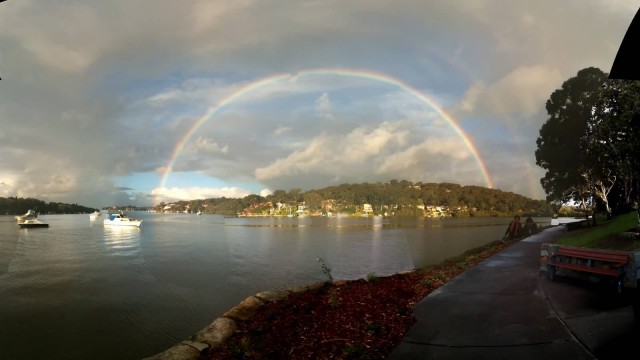 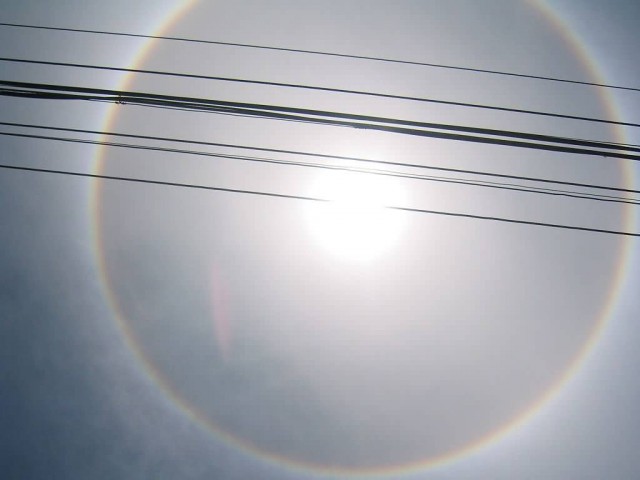 In theory every rainbow is a circle, but from the ground only its upper half can be seen. Since the rainbow’s centre is diametrically opposed to the sun’s position in the sky, more of the circle comes into view as the sun approaches the horizon, meaning that the largest section of the circle normally seen is about 50% during sunset or sunrise.

Viewing the rainbow’s lower half requires the presence of water droplets below the observer’s horizon, as well as sunlight that is able to reach them. These requirements are not usually met when the viewer is at ground level, either because droplets are absent in the required position, or because the sunlight is obstructed by the landscape behind the observer. 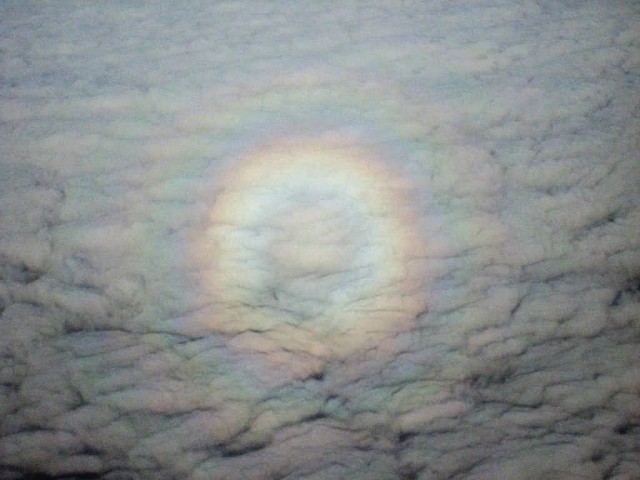 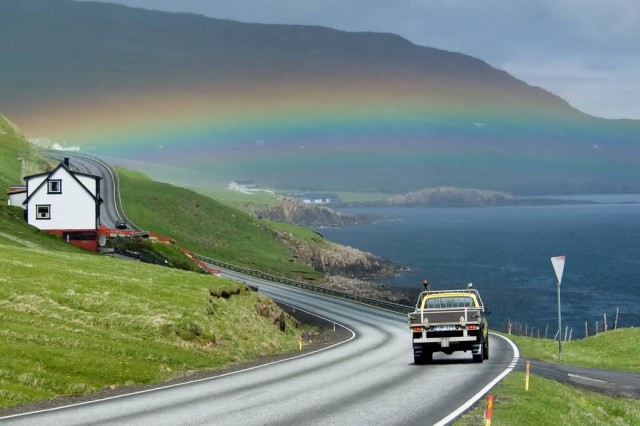 The alternating faint rainbows are caused by interference between rays of light following slightly different paths with slightly varying lengths within the raindrops. Supernumerary rainbows are clearest when raindrops are small and of uniform size. The very existence of supernumerary rainbows was historically a first indication of the wave nature of light and the first explanation was provided by Thomas Young in 1804. 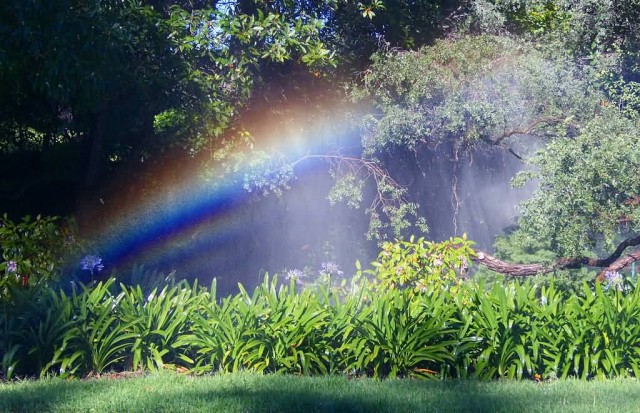 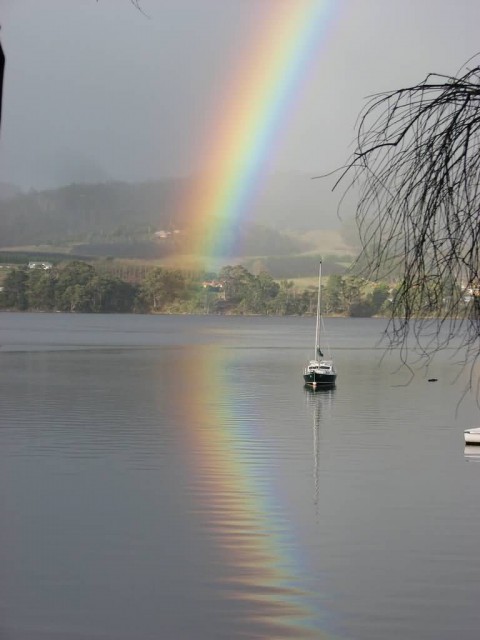 A reflected rainbow may appear in the water surface below the horizon. The sunlight is first deflected by the raindrops and then reflected off the body of water, before reaching the observer. The reflected rainbow is frequently visible, at least partially, even in small puddles. A reflection rainbow may be produced where sunlight reflects off a body of water before reaching the raindrops, if the water body is large, quiet over its entire surface and close to the rain curtain. 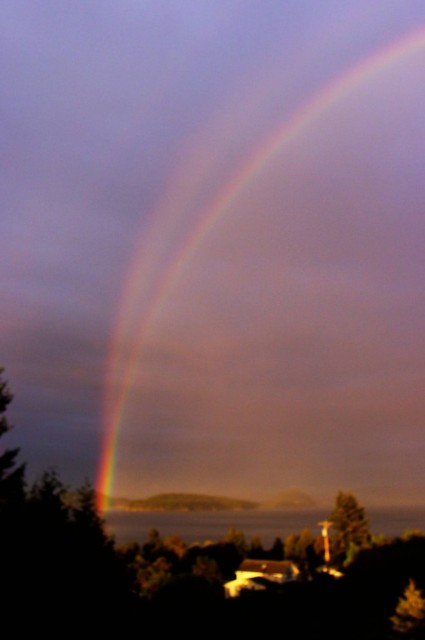 Occasionally a shower may happen at sunrise or sunset, where the shorter wavelengths like blue and green have been scattered and essentially removed from the spectrum. Further scattering may occur due to the rain and the result can be the rare and dramatic monochrome or red rainbow. 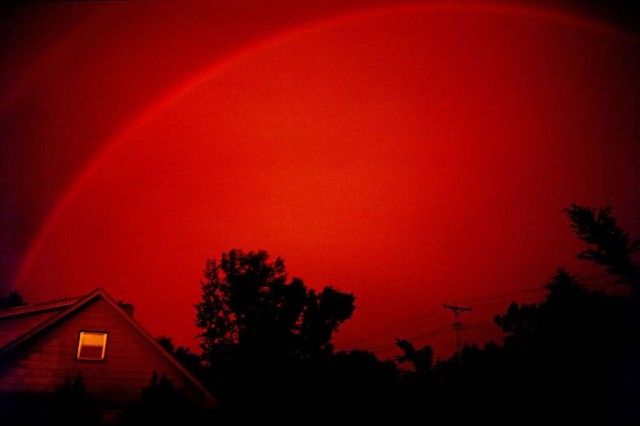