8 Aquatic Plants That Float On Water 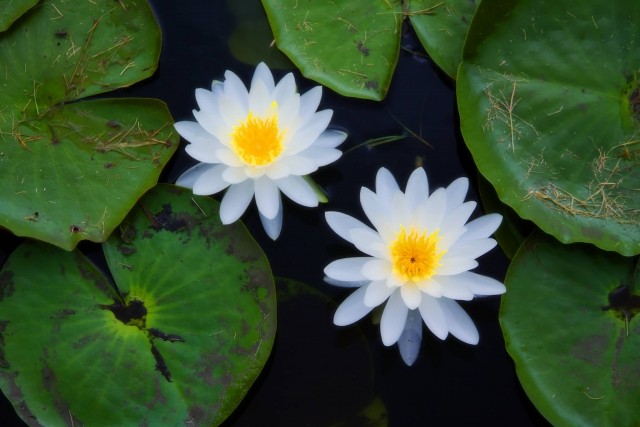 It is also known as the European White Waterlily, White Water Rose or Nenuphar. It is an aquatic flowering plant of the family Nymphaeaceae. It grows in water from 30-150 centimeters deep and likes large ponds and lakes. The leaves can be up to 30 cm in diameter and they take up a spread of 150 cm per plant. The flowers are white and they have many small stamens inside. 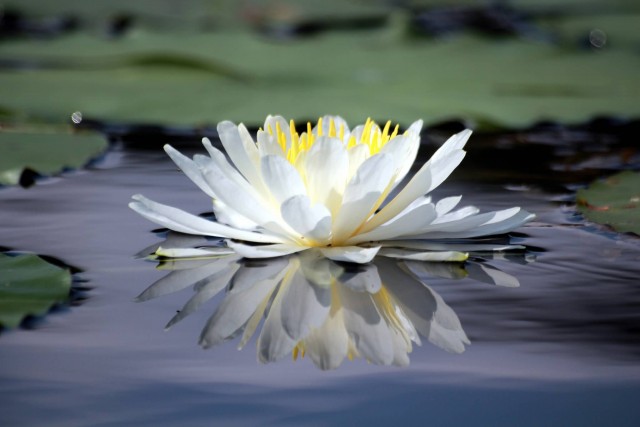 It is found all over Europe and in parts of North Africa and the Middle East in freshwater. The red variety which is in cultivation came from lake Fagertärn in the forest of Tiveden, Sweden. Roots and stalks are used in traditional herbal medicine along with the flower, the petals and other flower parts are the most potent. Also, it contains the active alkaloids nupharine and nymphaeine. 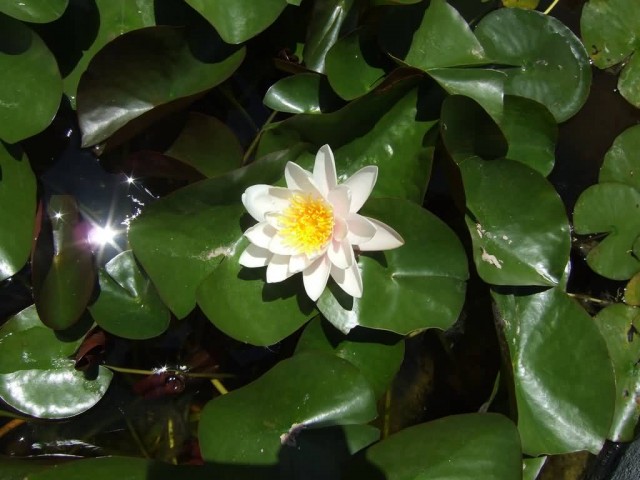 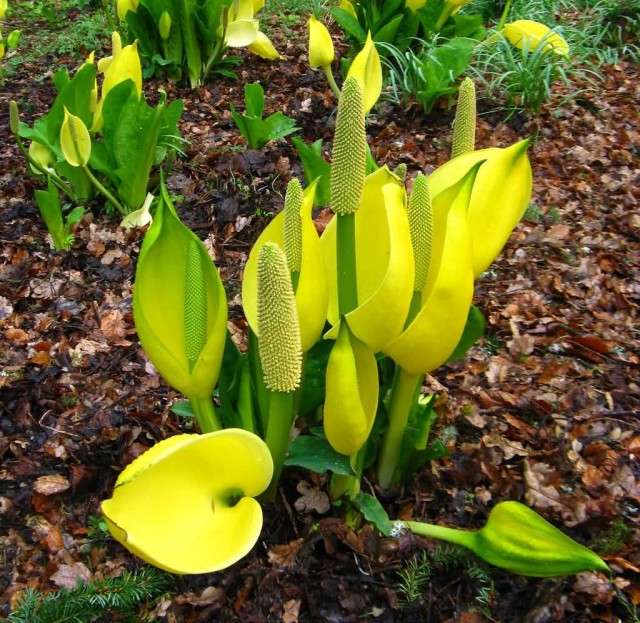 Yellow skunk cabbage is also called as western skunk cabbage (USA), American skunk-cabbage (Britain and Ireland) or swamp lantern. The plant is found in swamps and wet woods, along streams and in other wet areas of the Pacific Northwest. The plant is called skunk cabbage because of the distinctive “skunky” odor that it emits when it blooms. This odor will permeate the area where the plant grows. 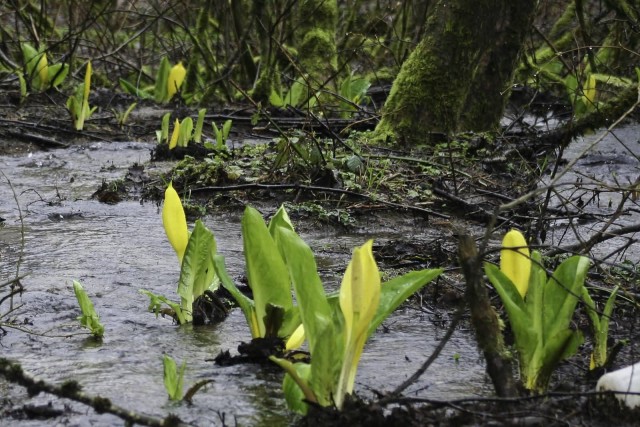 The distinctive odor attracts its pollinators, scavenging flies and beetles. The plant grows from rhizomes that measure 30 cm or longer. The leaves are the largest of any native plant in the region, 50–135 cm long and 30–80 cm wide when mature. Its flowers are produced in a spadix contained within a large, bright yellow or yellowish green spathe 30–40 cm tall. It is among the first flowers to appear in spring. 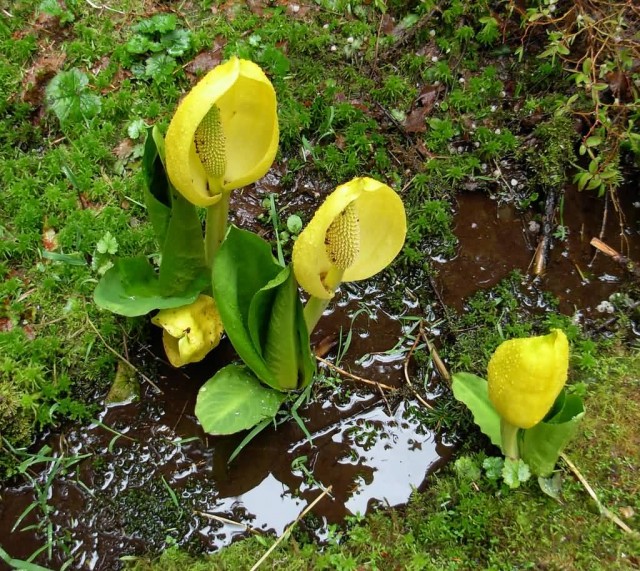 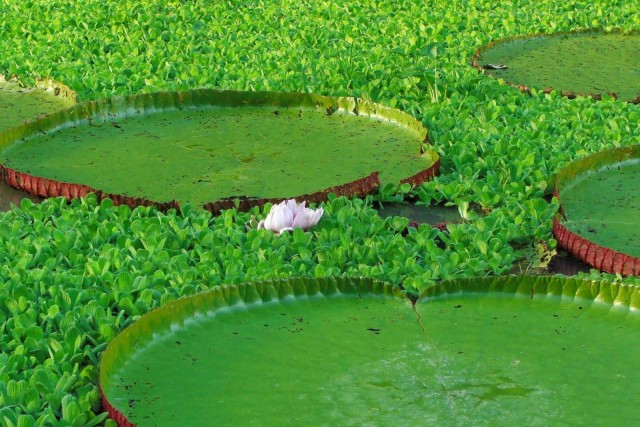 Victoria amazonica is a species of flowering plant, the largest of the Nymphaeaceae family of water lilies. The species has very large leaves, up to 3 m in diameter, that float on the water’s surface on a submerged stalk, 7–8 m in length. The species was once called Victoria regia after Queen Victoria, but the name was superseded. 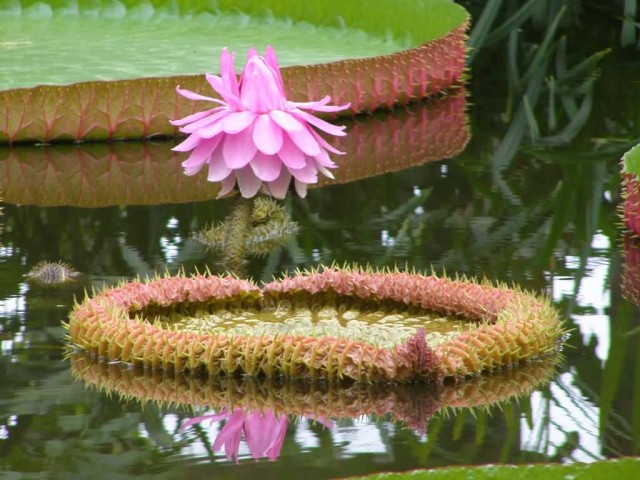 Victoria amazonica is native to the shallow waters of the Amazon River basin, such as oxbow lakes and bayous. It is depicted in the Guyanese coat of arms. The flowers are white the first night they are open and become pink the second night. They are up to 40 cm in diameter and are pollinated by beetles. It is the largest waterlily in the world. 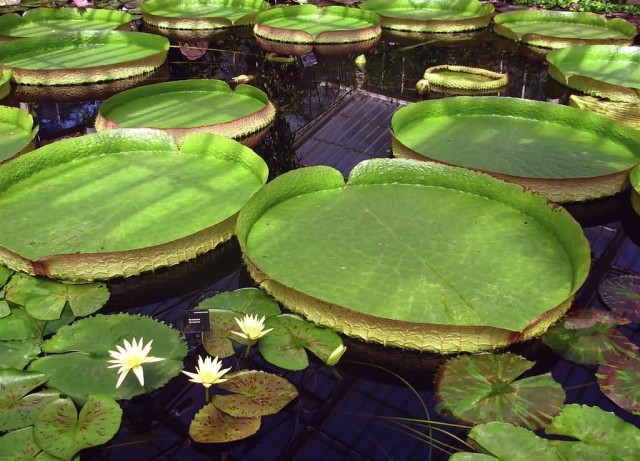 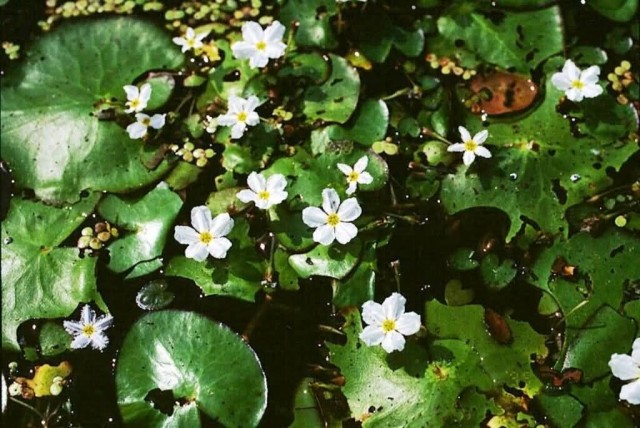 Nymphoides is a genus of aquatic flowering plants in the family Menyanthaceae. Nymphoides are aquatic plants with submerged roots and floating leaves that hold the small flowers above the water surface. Flowers are sympetalous, most often divided into five lobes (petals). The petals are either yellow or white and may be adorned with lateral wings or covered in small hairs. 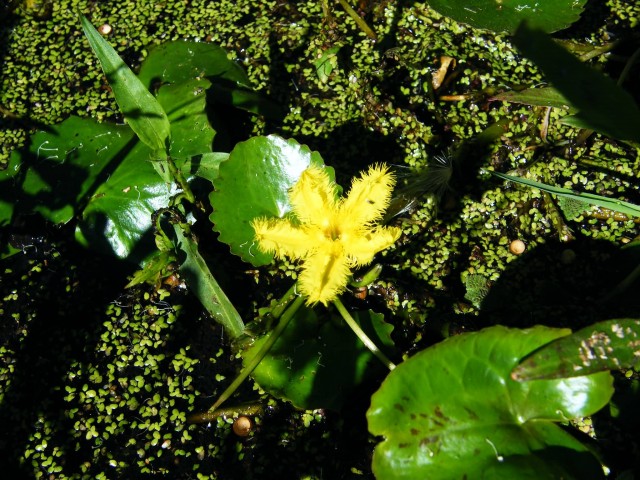 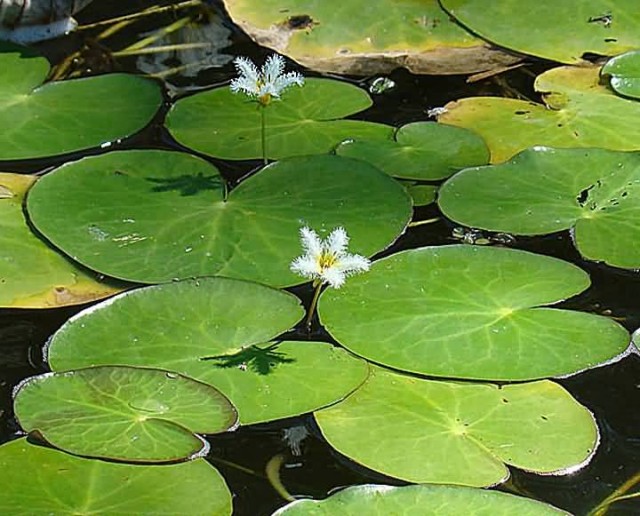 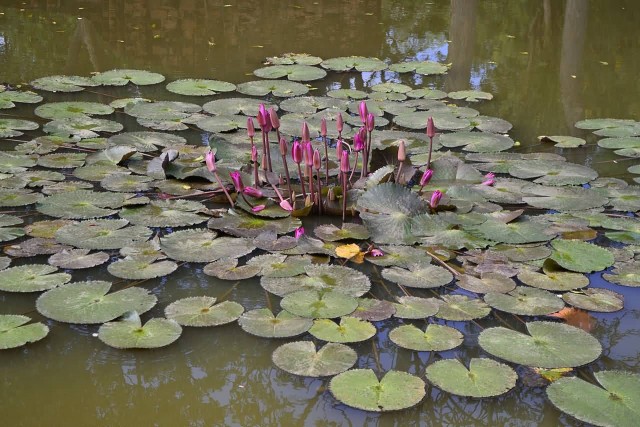 Nelumbo is a genus of aquatic plants with large, showy flowers. Members of nelumbo are commonly called lotus. Members outwardly resemble those in the family Nymphaeaceae but Nelumbo is actually very distant to Nymphaeaceae. “Nelumbo” is derived from the Sinhalese word Nelum. There are only two known living species in the genus.

The Indian lotus is native to Asia and nelumbo is the better known of the two. It is commonly cultivated and also used in Chinese medicine and cooking. This species is the national flower of India and Vietnam. The American lotus is native to North America and the Caribbean. 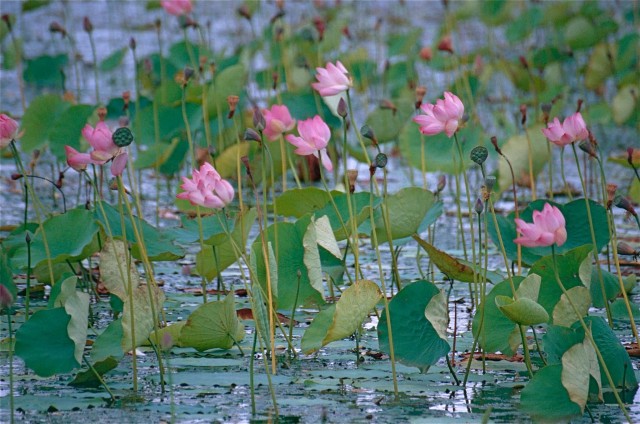 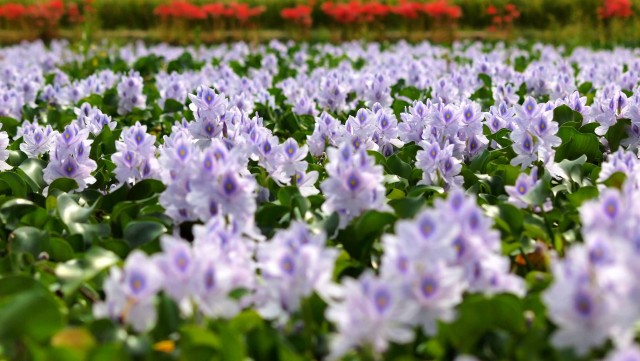 Water hyacinth is a free-floating perennial aquatic plant native to tropical and sub-tropical South America. With broad, thick, glossy, ovate leaves, water hyacinth may rise above the surface of the water as much as 1 meter in height. The leaves are 10–20 cm across and float above the water surface. They have long, spongy and bulbous stalks. The feathery, freely hanging roots are purple-black. An erect stalk supports a single spike of 8-15 conspicuously attractive flowers, mostly lavender to pink in colour with six petals. 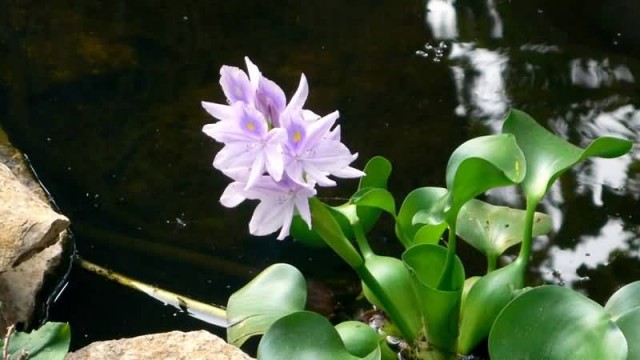 When not in bloom, water hyacinth may be mistaken for frog’s-bit. It is one of the fastest growing plants. Each plant can produce thousands of seeds each year and these seeds can remain viable for more than 28 years. The common water hyacinth are vigorous growers known to double their population in two weeks. 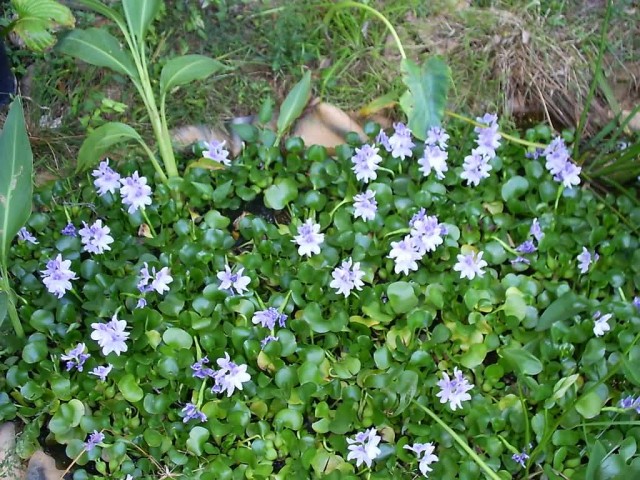 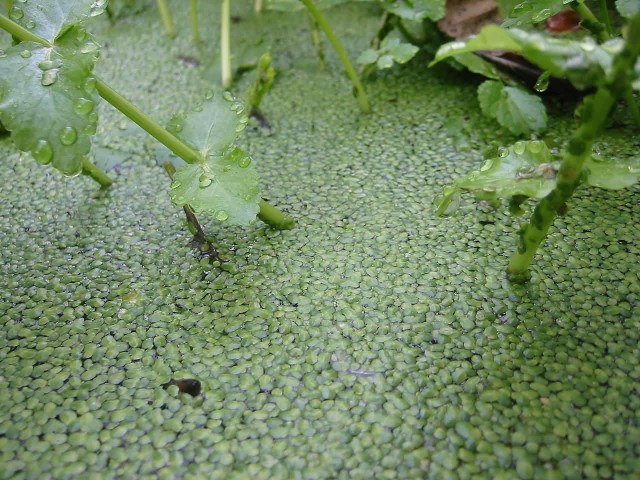 Duckweeds or water lens are flowering aquatic plants which float on or just beneath the surface of still or slow-moving bodies of fresh water and wetlands. It is also known as “bayroot”. These plants are very simple, lacking an obvious stem or leaves. The greater part of each plant is a small organized “thallus” or “frond” structure only a few cells thick, often with air pockets that allow it to float on or just under the water surface. 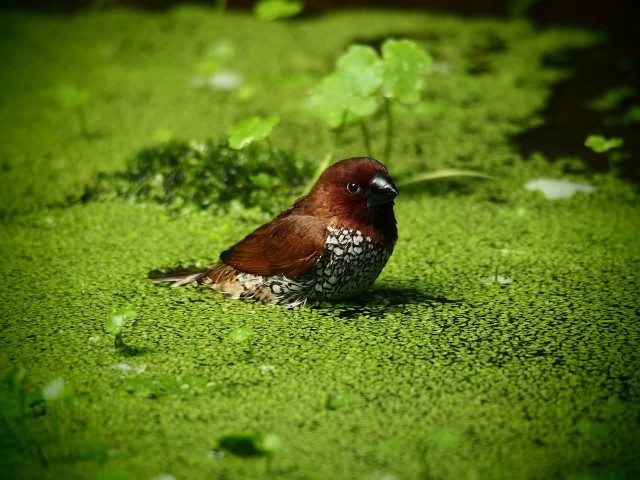 Depending on the species, each plant may have no root or may have one or more simple rootlets. Duckweeds tend to be associated with fertile, even eutrophic conditions. Duckweed can be spread by waterfowl and small mammals, transported inadvertently on their feet and bodies as well as by moving water. Duckweed is an important high-protein food source for waterfowl and also is eaten by humans in some parts of Southeast Asia. 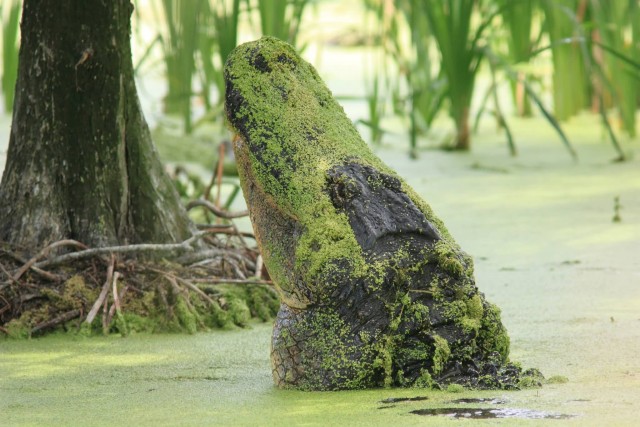 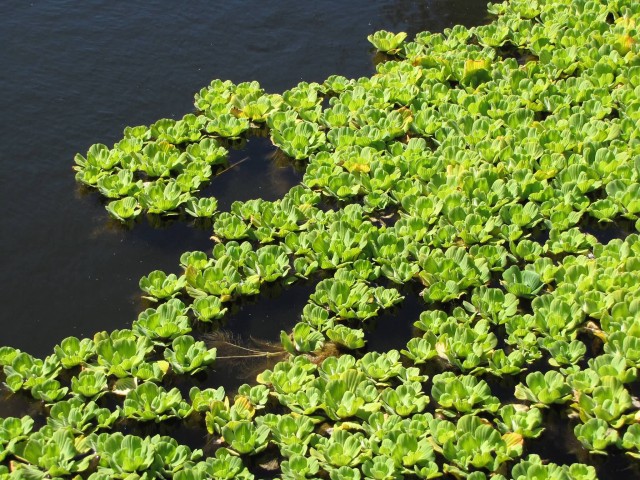 Water cabbage is an aquatic plant in the arum family. It is also called as water lettuce, Nile cabbage or shellflower. Its native distribution is uncertain, but probably pantropical. It was first discovered from the Nile near Lake Victoria in Africa. It is now present, either naturally or through human introduction. It is a perennial monocotyledon with thick, soft leaves that form a rosette. It floats on the surface of the water, its roots hanging submersed beneath floating leaves. 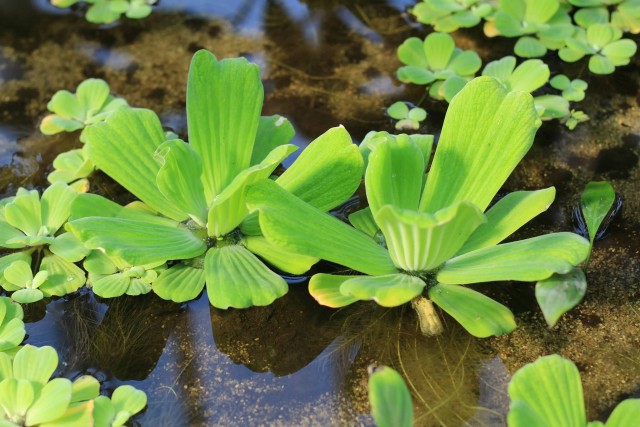 The leaves can be up to 14 cm long and have no stem. They are light green with parallel veins, wavy margins and are covered in short hairs which form basket-like structures which trap air bubbles. Water cabbage is among the world’s most productive freshwater aquatic plants. Water cabbage is often used in tropical aquariums to provide cover for fry and small fish. 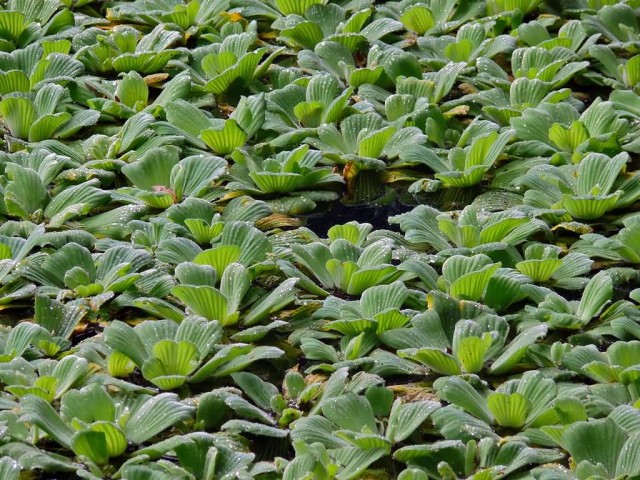