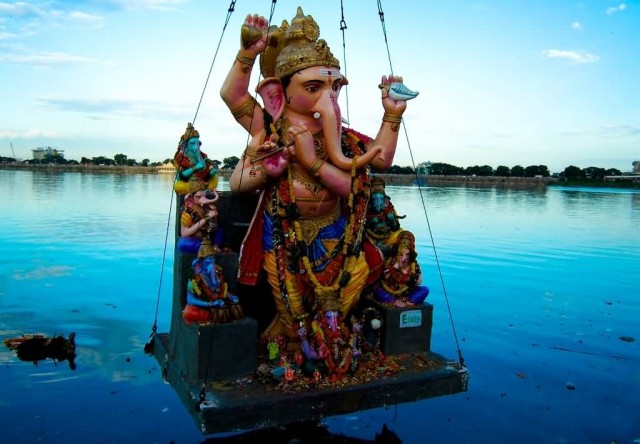 Festival of Lord Ganesh. Through, Lokmanya Tilak’s efforts Ganeshotsav became a public celebration a century ago. However, Deshasthas families also install their own clay Ganpati in their house on Ganesh Chaturthi for family observation of the festival. The private celebration can go on for 1½ days to full 10 days according to each family’s tradition. A Modak steamed rice dumpling usually with a jaggery/coconut filling is a sweet prepared for this occasion and is considered the favourite of Lord Ganesh. 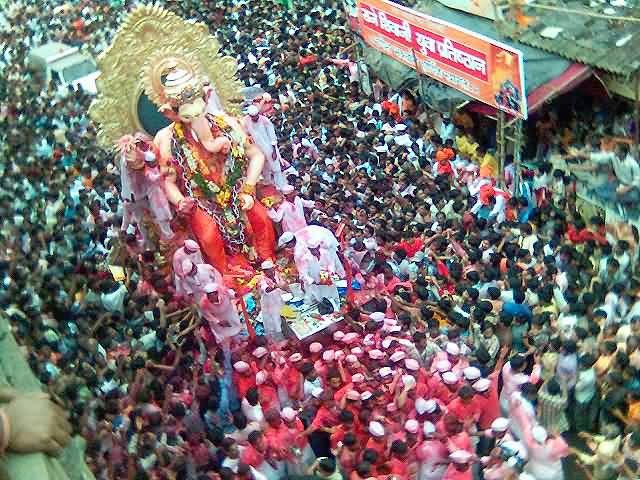 Ganeshotsav also incorporates the Gauri festival. Deshasthas install statues of the Gauri. Kokanstha Brahmins on the other hand use special rocks as symbols of Gauri. In some families Gauri is also known as Mahalakshmi puja. It is celebrated for three days, on the first day, Mahalakshmi arrival is observed. The ladies in the family will bring statues of Mahalakshmi from the door to the place where they will be worshipped. On the second day, the family members get together and prepare a meal of puran poli. On the third day, Mahalakshmi goes to her husband’s home. 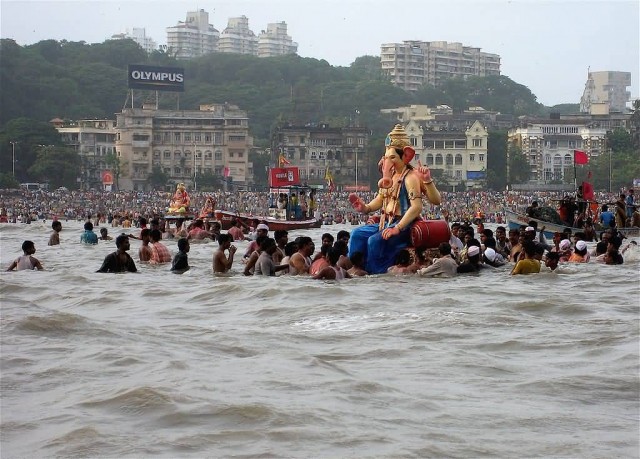 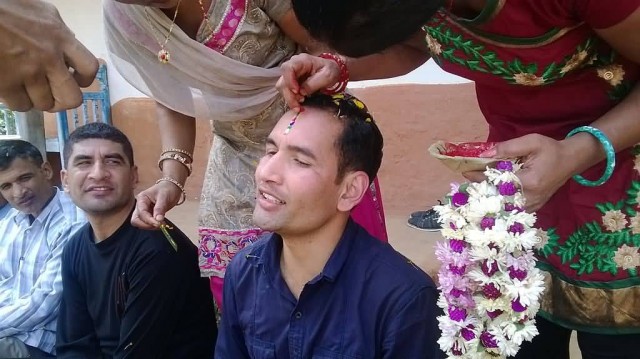 Is a festival celebrated by Hindus of India on the last day of the five-day-long Diwali festival. This is the second day of the bright fortnight or Shukla Paksha of the Hindu lunar month of Kartika. The celebrations of this day are similar to the festival of Raksha Bandhan. On this day, sisters pray for a long and happy life for their brothers, by performing the Tika ceremony. On this day, in contrast to Raksha Bandhan, sisters present gifts to their brothers. On the day of the festival, sisters invite their brothers for a sumptuous meal often including their favorite dishes.

The whole ceremony signifies the duty of a brother to protect his sister, as well as a sister’s blessings for her brother. Carrying forward the ceremony in traditional style, sisters perform aarti for their brother and apply a red tika on the brother’s forehead. This tika ceremony on the occasion of Bhai Bij signifies the sister’s sincerest prayers for the long and happy life of her brother. In return brothers bless their sisters and treat them also with gifts or cash. 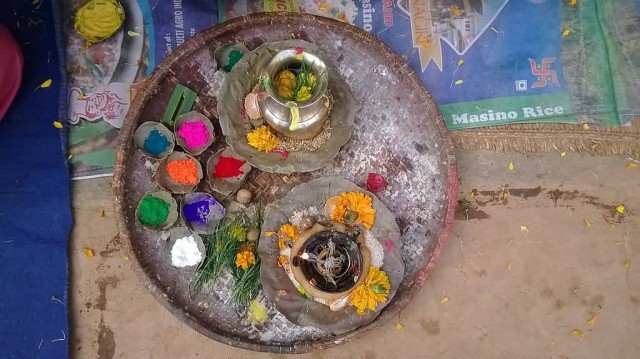 Gudhi Padwa  is the Sanskrit name for Chaitra Shukla Pratipada. It is celebrated on the first day of the Chaitra month to mark the beginning of the New year according to the lunisolar Hindu calendar. This day is also the first day of Chaitra Navratri and Ghatasthapana also known as Kalash Sthapana is done on this day. On this day a gudhi is found sticking out of a window or otherwise prominently displayed in traditional Maharashtrian households. Bright green or yellow cloth adorned with brocade (zari) tied to the tip of a long bamboo over which gaathi (sugar crystals), neem leaves citation needed, a twig of mango leaves and a garland of red flowers is tied. A silver or copper pot is placed in the inverted position over it. Altogether, it is called as Gudhi. It is hoisted outside the house, in a window, terrace or a high place so that everybody can see it. 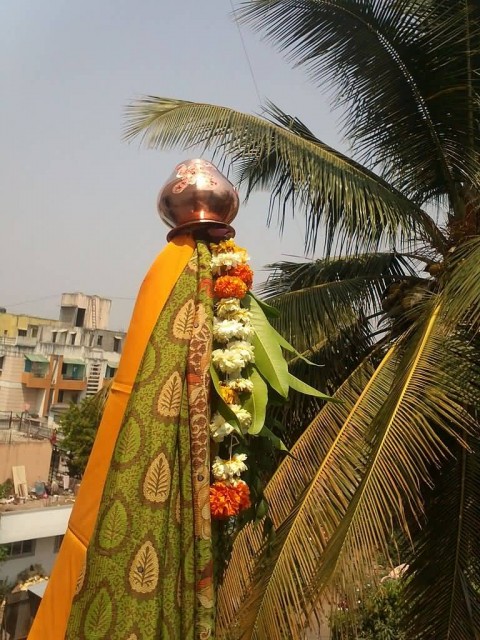 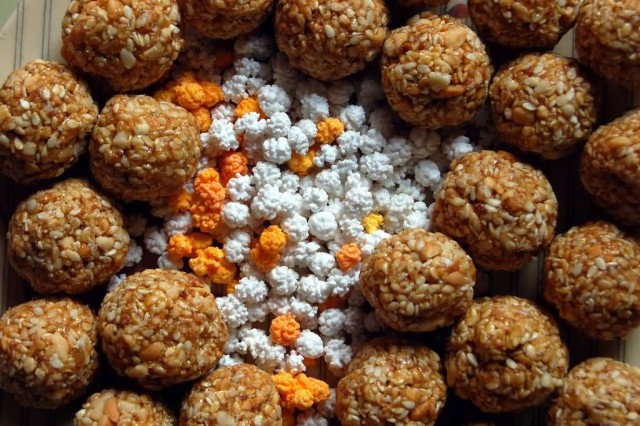 Makar Sankranti is a Hindu festival celebrated in almost all parts of India and Nepal in a myriad of cultural forms. It is a harvest festival. Makar Sankranti marks the transition of the Sun into the zodiac sign of Makara rashi  on its celestial path. The day is also believed to mark the arrival of spring in India and is a traditional event. Makara Sankranthi is a solar event making one of the few Indian festivals which fall on the same date in the Gregorian calendar every year: 14 January, with some exceptions when the festival is celebrated on 13 or 15 January. 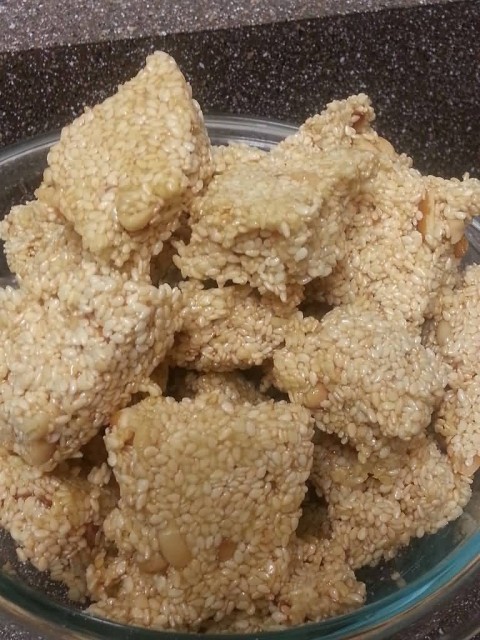 Sankranti is celebrated all over South Asia with some regional variations. It is known by different names and celebrated with different customs in different parts of the country popularly celebrated in Karnataka, Telangana, Andhra pradesh and Tamil Nadu. The festival is one of the most important festivals. People start their day by worshiping and putting til into fire followed by eating “Dahi-chuda”, a dish made of beaten rice  served with an even larger serving of dahi, with cooked kohada that is prepared specially with sugar and salt but no water. The meal is generally accompanied by Tilkut and Lai. 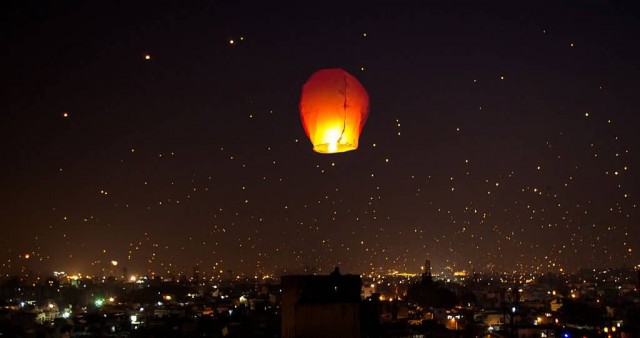 Nag Panchami is a traditional worship of snakes or serpents observed by Hindus throughout India and also in Nepal. The worship is offered on the fifth day of bright half of Lunar month of Shravan, according to the Hindu calendar. On the Nag Panchami day Nag, cobras, and snakes are worshipped with milk, sweets, flowers, lamps and even sacrifices. Images of Nag deities made of silver, stone, wood, or paintings on the wall are first bathed with water and milk and then worshipped with the reciting of the following mantras. Serpent deity made of silver, stone or wood or the painting of snakes on the wall are given a bath with milk and then revered. Nag Panchami is also the occasion observed as Bhratru Panchami when women with brothers worship snakes and its holes and offer prayers to propitiate nagas so that their brothers are protected and do not suffer or die due to snake bite. The Nag Panchami is also celebrated as Vishari Puja or Bishari Puja in some parts of the country and Bisha or Visha means “poison”. 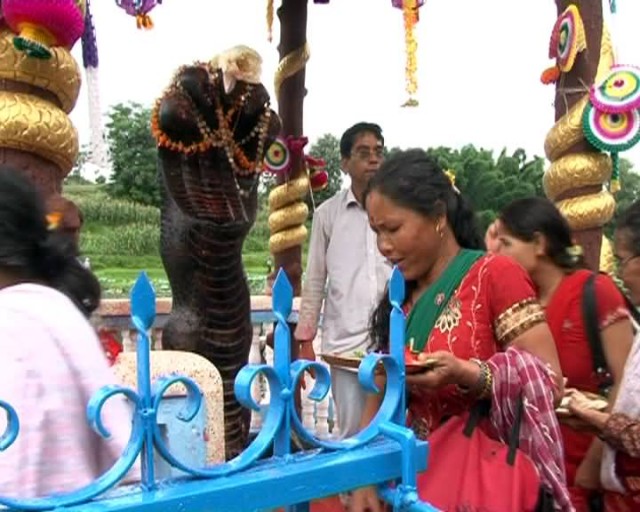 Pola is a bull-worshipping festival celebrated by farmers mainly in the Indian state of Maharashtra. On the day of Pola, the farmers decorate and worship their bulls. Pola falls on the day of the Pithori Amavasya (the new moon day) in the month of Shravana .On the day of Pola, the bulls are first given a bath and then decorated with ornaments and shawls. Their horns are painted and their necks are adorned with garlands of flowers. Then, they are worshipped by their owners. The processions of decorated bulls, accompanied by the music and dancing, are carried out in the evenings. The first bullock to go out is an old bullock with a wooden frame (called makhar) tied on its horns. This bullock is made to break a rope of mango leaves stretched between two posts and is followed by all the other cattle in the village. The order of the cattle is often indicative of the social standing of their owners in the village. In some villages, fairs are organized, where competitions take place. Pola is the main festival of the farmers of the Maharashtra, especially the Kunbis.  Puran Poli, karanji and curry with five vegetables are the main dishes associated with the festival. 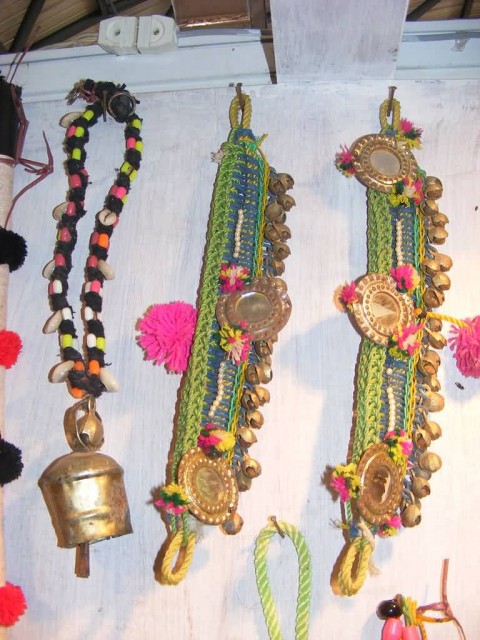 Vat Purnima  is a celebration observed in the Western Indian states of Gujarat, Maharashtra and Karnataka, India. Women pray for the prosperity and longevity of their husbands by tying threads around a banyan tree  which is called “pipal puja”, on this day. It honours Savitri, the legendary wife who rescued her husband’s soul from the ruler of the departed, Yama. The festival of Vat Purnima (or Vad Savitri) is celebrated in the month of Jesht (May–June). Women observe a fast and tie threads around a banyan tree and pray for the well being of their husband. On this occasion of Vad Savitri, women keep a fast for their husbands. They wear ornate bridal type dresses and jewellery. Their fast is observed the whole night till the next morning. During this puja, women pray for good health of their husbands. Women give water to the tree, holy sprinkle red powder (kumkum) on it, and wrap cotton threads around tree’s trunks. Then they go seven times around the tree called the parikrama or pradakshina.