10 Amazing Birds But They Can’t Fly 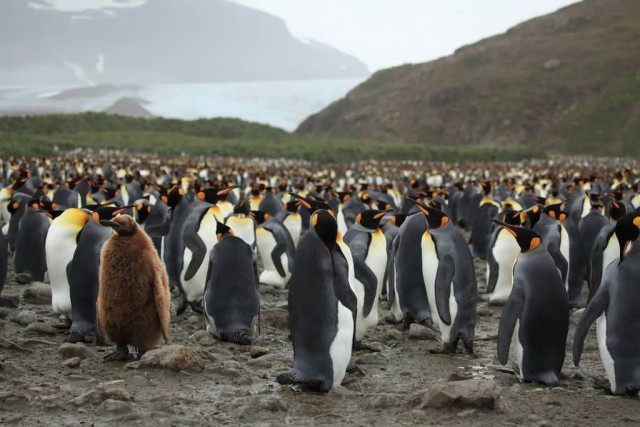 Penguins are a group of aquatic, flightless birds living almost exclusively in the Southern Hemisphere, especially in Antarctica. Major populations of penguins are found in Antarctica, Argentina, Australia, Chile, New Zealand and South Africa. Penguins are superbly adapted to aquatic life. They spend about half of their lives on land and half in the oceans. Their vestigial wings have become flippers, useless for flight in the air. Penguins swimming looks very similar to bird’s flight in the air. 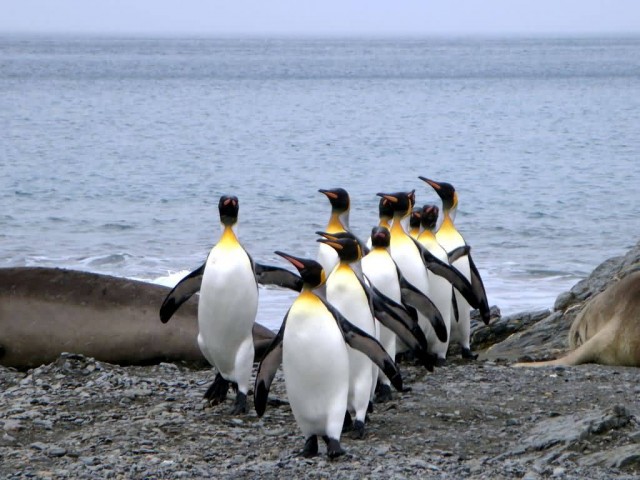 All penguins are countershaded for camouflage that is, they have black backs and wings with white fronts. Most penguins feed on krill, fish, squid and other forms of sealife caught while swimming underwater. Penguins seem to have no special fear of humans and have approached groups of explorers without hesitation. This is probably because penguins have no land predators in Antarctica or the nearby offshore islands. Penguins are at risk at sea from predators such as sharks, the orca and the leopard seal. 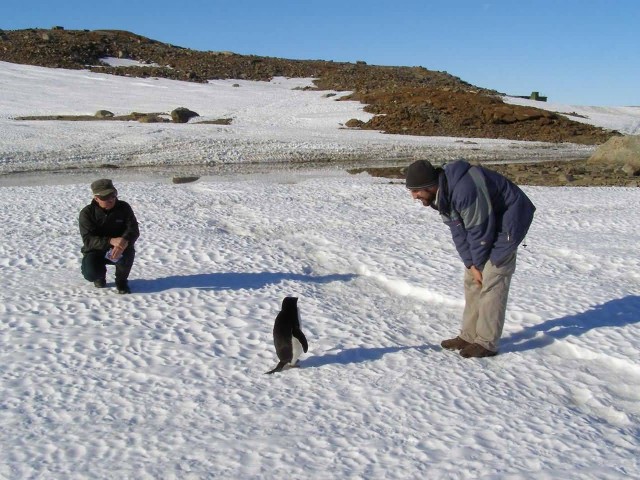 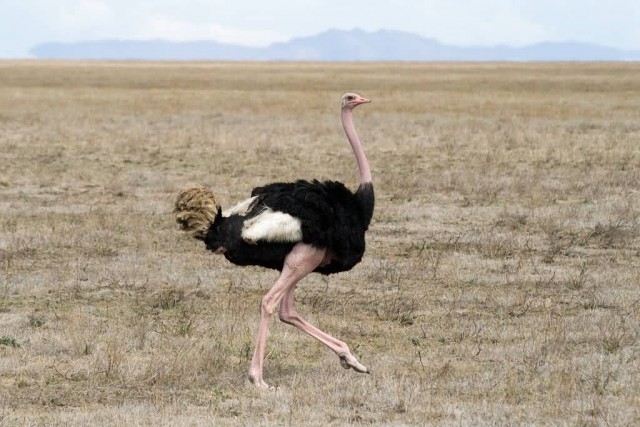 The ostrich is either one or two species of large flightless birds native to Africa. Ostriches usually weigh from 63 to 145 kilograms. It is distinctive in its appearance with a long neck and legs. It can run at up to about 70 km/h. The ostrich is the largest living species of bird and lays the largest eggs of any living bird. Also, it is the fastest land speed bird of any bird. 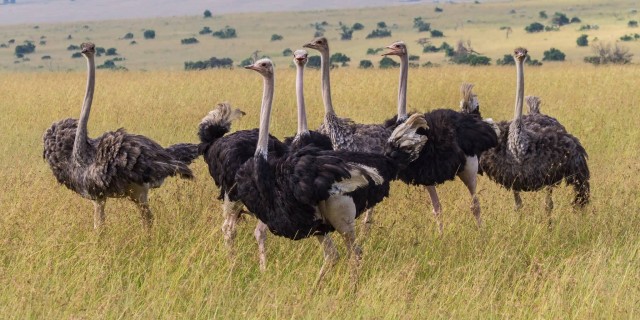 They mainly feed on seeds, shrubs, grass, fruit and flowers but it also eats invertebrates. They are most active early and late in the day. It lives in nomadic groups of 5 to 100 birds that often travel together with other grazing animals, such as zebras or antelopes. Animals that prey on ostriches of all ages may include cheetahs, lions, leopards, African hunting dogs and spotted hyenas. 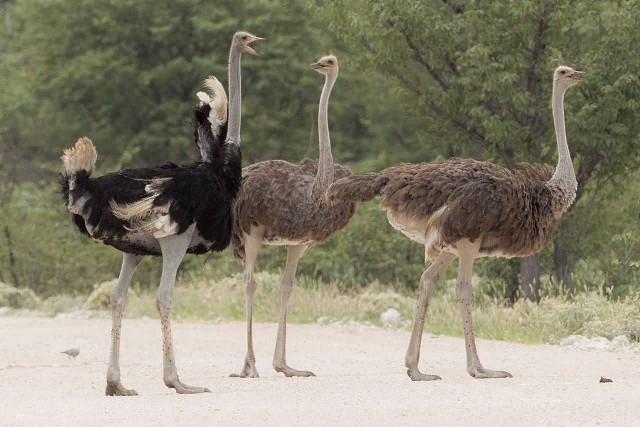 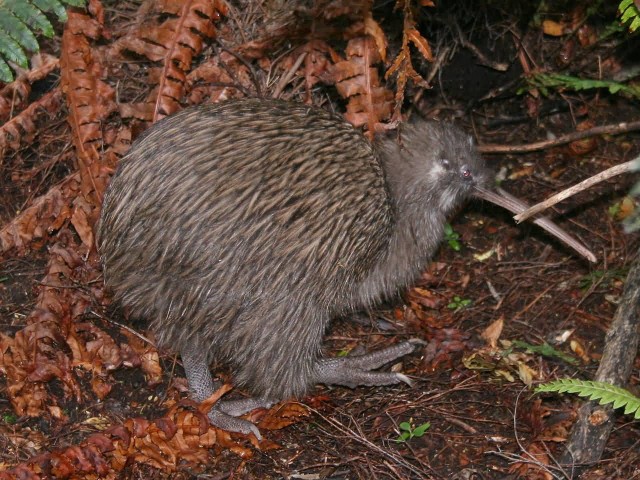 Kiwis are flightless birds native to New Zealand. At around the size of a domestic chicken, kiwi are by far the smallest living ratites and lay the largest egg in relation to their body size of any species of bird in the world. The kiwi is a national symbol of New Zealand. The kiwi is more closely related to the emu and the cassowaries than to the moa. Like all the other ratites, they have no keel on the sternum to anchor wing muscles. The vestigial wings are so small that they are invisible under the bristly, hair-like, two-branched feathers.

Kiwi are shy and usually nocturnal. Their mostly nocturnal habits may be a result of habitat intrusion by predators, including humans. Kiwi have a highly developed sense of smell, unusual in a bird and are the only birds with nostrils at the end of their long beaks. Kiwi eat small invertebrates, seeds, grubs and many varieties of worms. They also may eat fruit, small crayfish, eels and amphibians. 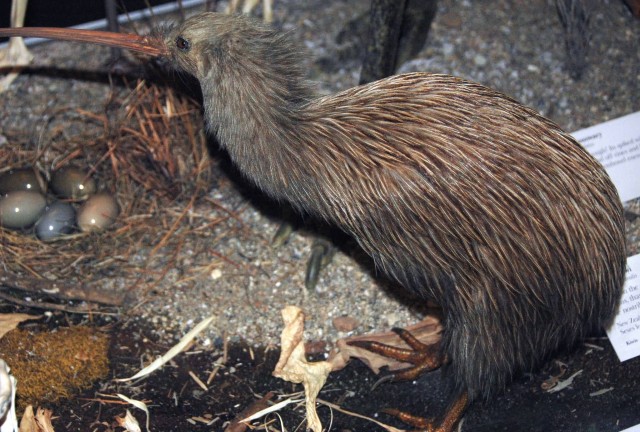 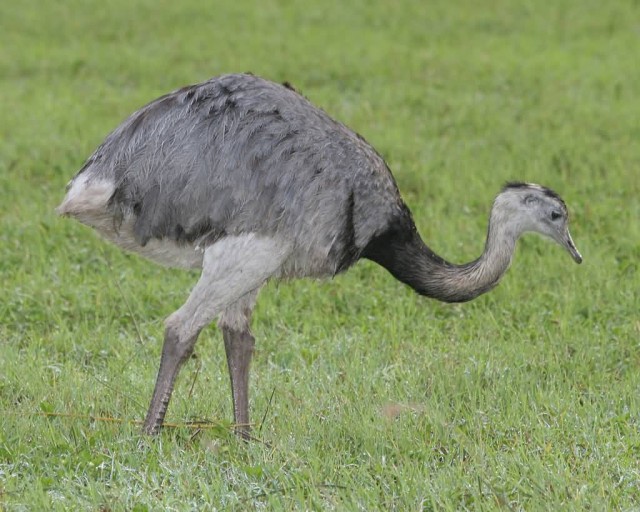 The rheas are flightless birds without a keel on their sternum bone. They are native to South America and related to the ostrich and emu. There are two extant species: the greater or American rhea and the lesser or Darwin’s rhea. Rheas are large, flightless birds with grey-brown plumage, long legs and long necks, similar to an ostrich. They can reach 170 cm tall at the head, 100 cm at the back and can weigh up to 40 kg. Their wings are large for a flightless bird and are spread while running, to act like sails. 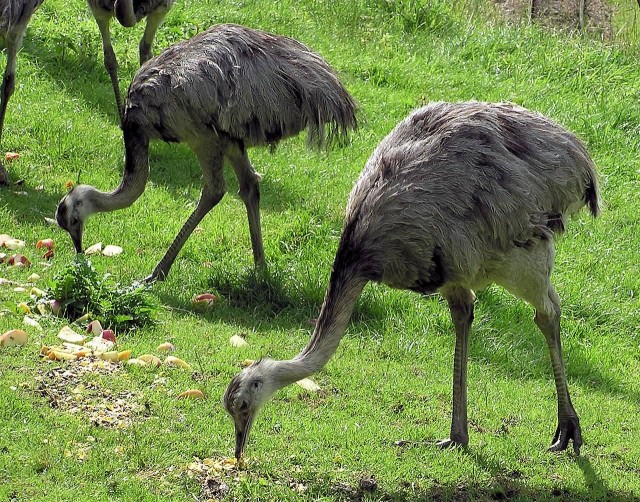 They are grassland birds and both species prefer open land. The greater rheas live in open grasslands, pampas and chaco woodlands. They prefer to breed near water and prefer lowlands, seldom going above 1,500 metres. On the other hand, the lesser rhea will inhabit most shrubland, grassland, even desert salt puna up to 4,500 metres. Rheas are vegetarian and prefer broad-leafed plants but they also eat fruits, seeds and roots, as well as insects. 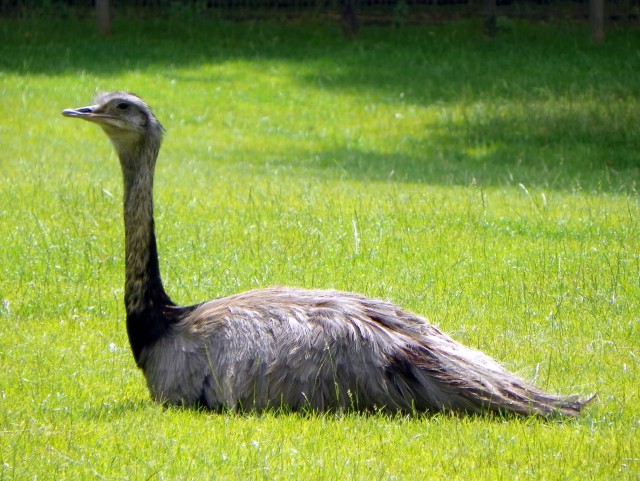 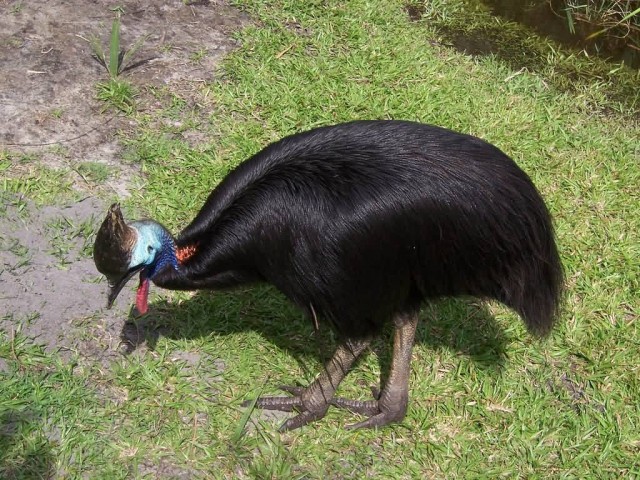 The cassowaries flightless birds. They are native to the tropical forests of New Guinea, nearby islands and northeastern Australia. There are three extant species. The most common of these, the southern cassowary is the third tallest and second heaviest living bird, smaller only than the ostrich and emu. Cassowaries feed mainly on fruit, although all species are truly omnivorous and will take a range of other plant food including shoots, grass seeds and fungi in addition to invertebrates and small vertebrates. 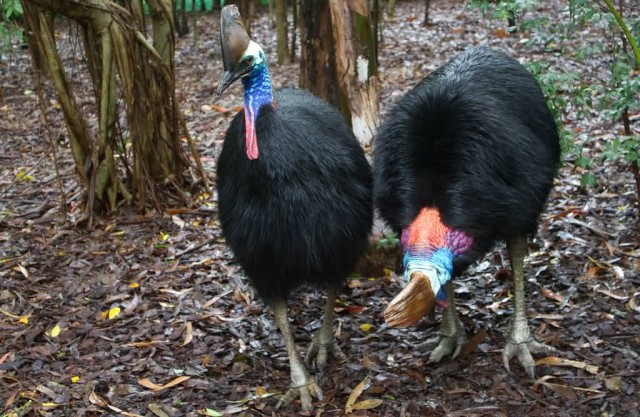 Cassowaries are very shy, but when provoked they are capable of inflicting injuries, occasionally fatal to dogs and people. Females are bigger and more brightly coloured. All cassowaries have feathers that consist of a shaft and loose barbules. Cassowaries have small wings with 5-6 large remeges. The breeding season starts in May or June. Females lay three to eight large, bright green or pale green-blue eggs in each clutch. 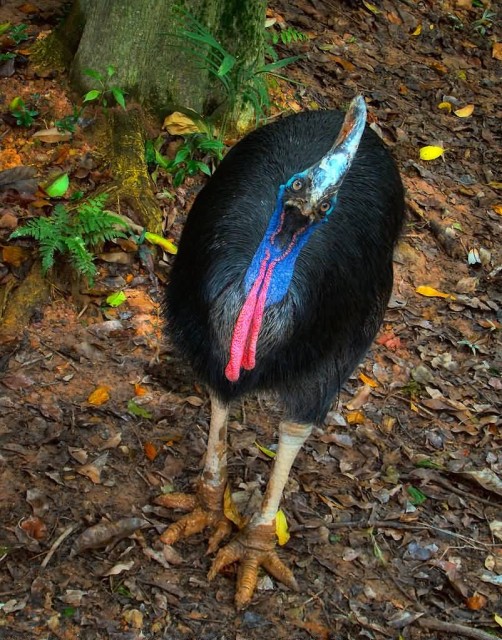 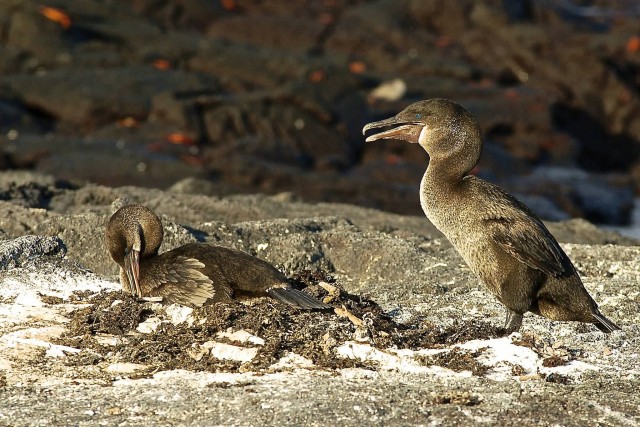 The flightless cormorant also known as the Galapagos cormorant, is a cormorant native to the Galapagos Islands. It is an example of the highly unusual fauna there. It is unique in that it is the only cormorant that has lost the ability to fly. Like all cormorants, this bird has webbed feet and powerful legs that propel it through ocean waters as it seeks its prey of fish, eels, small octopuses and other small creatures. 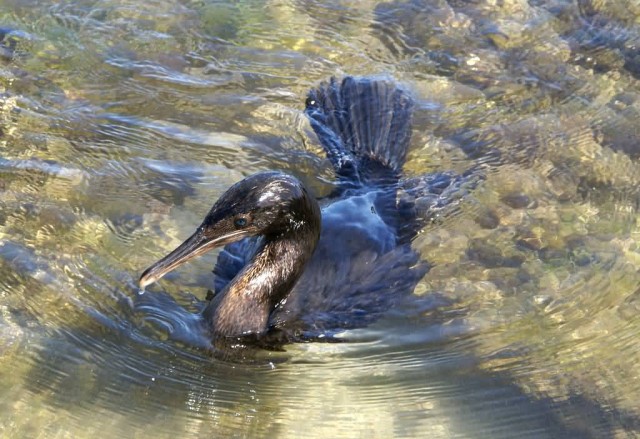 They feed near the sea floor and no more than 100 m offshore. The flightless cormorants look slightly like a duck, except for their short, stubby wings. The upperparts are blackish and the underparts are brown. The long beak is hooked at the tip and the eye is turquoise. This bird’s feathers are not waterproof and they spend time after each dive drying their small wings in the sunlight. 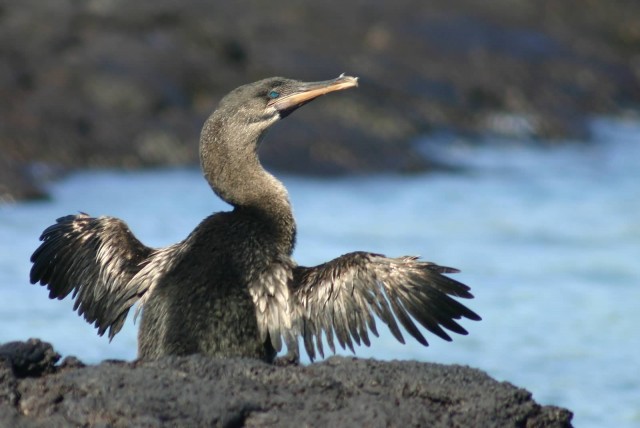 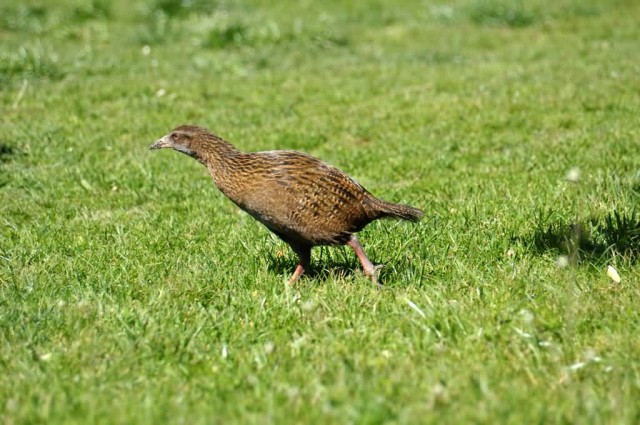 The weka also known as Maori hen or woodhen, is a flightless bird species of the rail family. It is endemic to New Zealand, where four subspecies are recognized. Weka are sturdy brown birds, about the size of a chicken. Weka occupy areas such as forests, sub-alpine grassland, sand dunes, rocky shores and modified semi-urban environments. 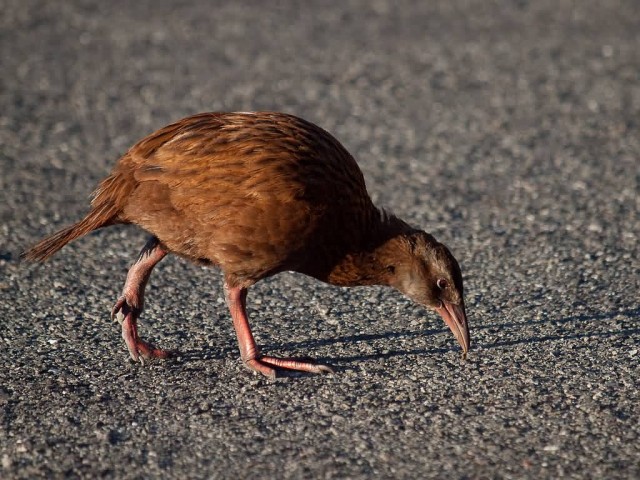 They feed mainly on invertebrates and fruit, leaves, grass, berries and seeds. Weka usually lay eggs between August and January. Female weka lay three creamy or pinkish eggs blotched with brown and mauve. Both sexes incubate. The chicks hatch after a month and are fed by both parents until fully grown between six and ten weeks. 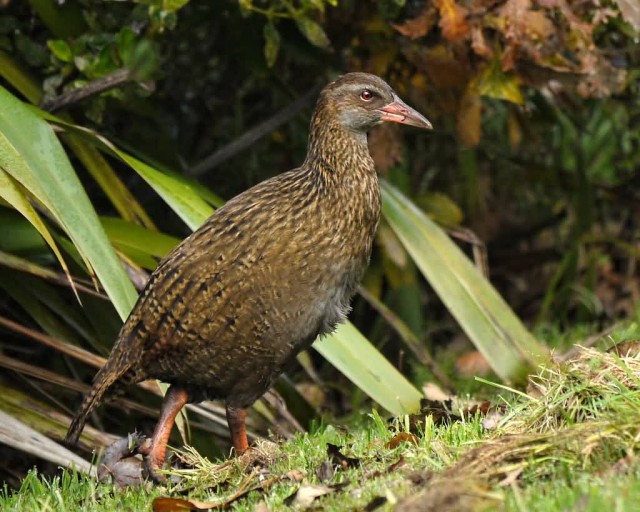 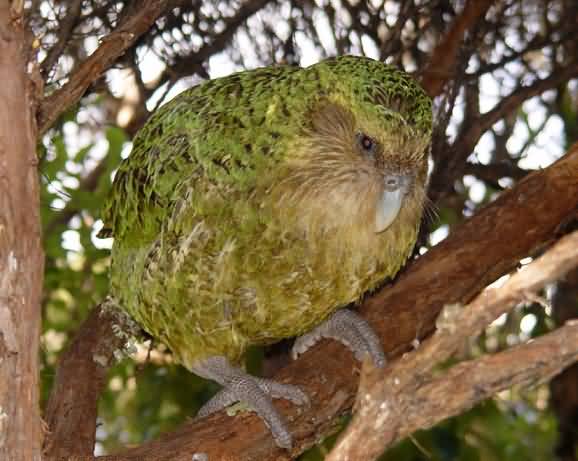 The kakapo also called owl parrot, is a species of large, flightless, nocturnal, ground-dwelling parrot of the super-family Strigopoidea endemic to New Zealand. The kakapo is a large grey beak, short legs, large feet and wings and a tail of relatively short length parrot. It is the world’s only flightless parrot, the heaviest parrot, nocturnal, herbivorous, visibly sexually dimorphic in body size. 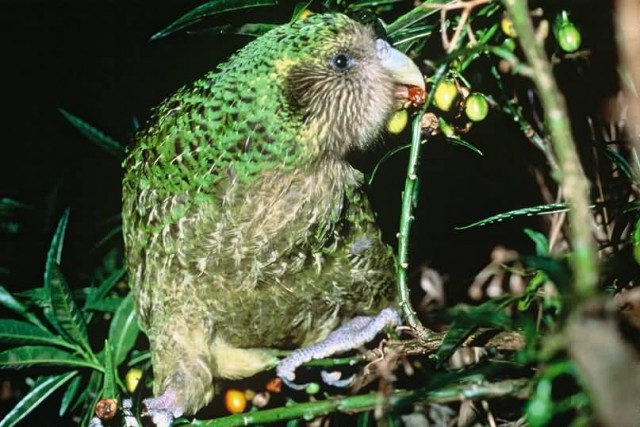 It has a low basal metabolic rate and no male parental care and also, it is the only parrot to have a polygynous lek breeding system. It is also possibly one of the world’s longest-living birds. Though the kakapo cannot fly, it is an excellent climber, ascending to the crowns of the tallest trees. It can also “parachute”, descending by leaping and spreading its wings. In this way it may travel a few metres (yards) at an angle of less than 45 degrees. 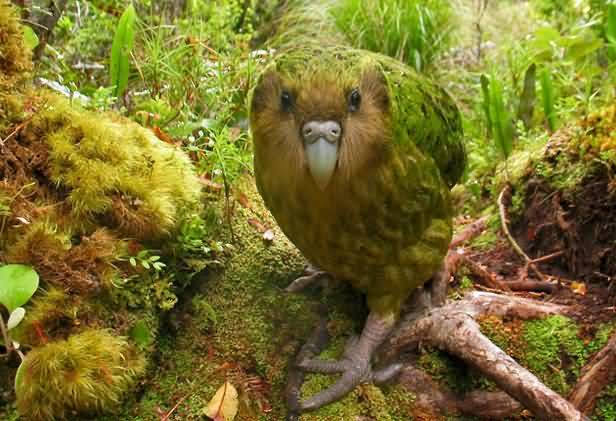 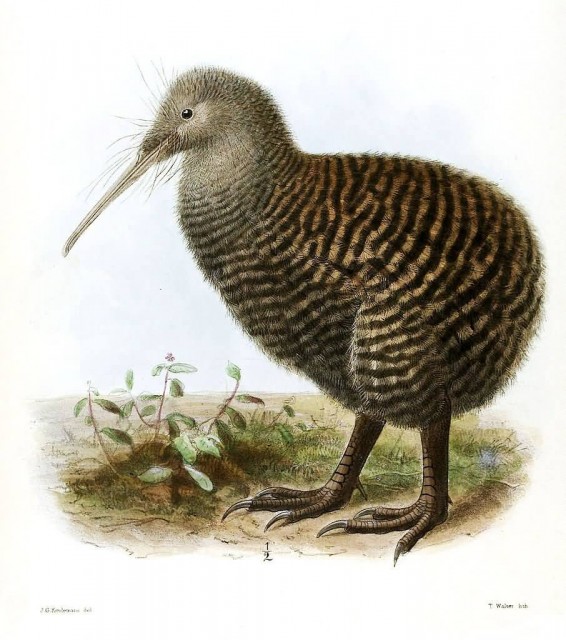 The great spotted kiwi also called as a great gray kiwi or roroa is a species of kiwi and it is endemic to the South Island of New Zealand. The great spotted kiwi, as a member of the ratites and these are flightless. It is the largest of the kiwi. The rugged topography and harsh climate of the high altitude, alpine, part of its habitat. There are number of predators, which include dogs, ferrets, cats and stoats.

This kiwi is highly aggressive and pairs will defend their large territories against other kiwis. Great spotted kiwis are nocturnal and will sleep during the day in burrows. At night, they feed on invertebrates and will also eat plants. Great spotted kiwi breed between June and March. The egg is the largest of all birds in proportion to the size of the bird. Chicks take 75 to 85 days to hatch and after hatching, they are abandoned by their parents. 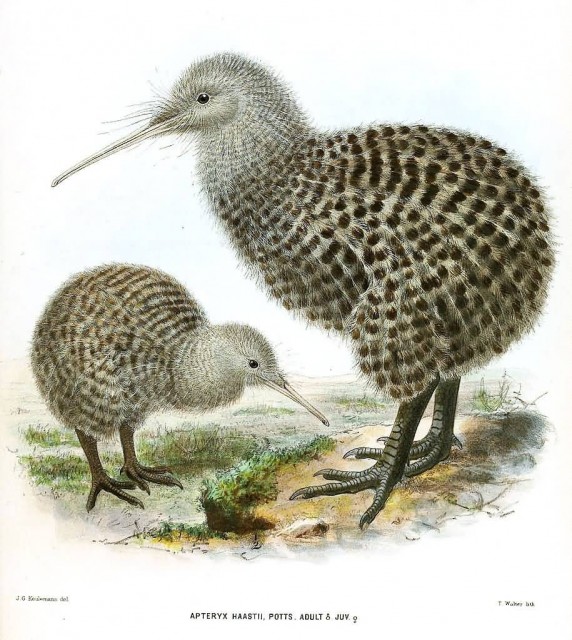 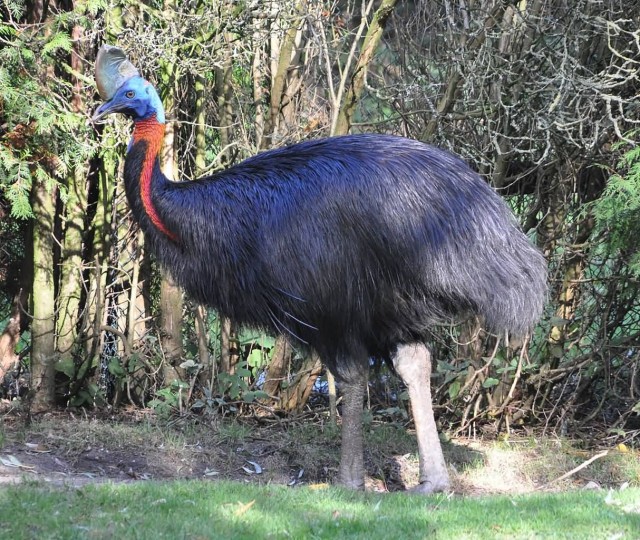 The northern cassowary also known as the single-wattled cassowary or gold-neck cassowary. It is a large, stocky flightless bird of northern New Guinea. It has hard and stiff black plumage, blue facial skin and a casque on top of the head. It has a bright red or yellow colored neck and wattle. The feet are huge and strong. Compared to the southern cassowary, the northern cassowary has a slightly shorter bill. 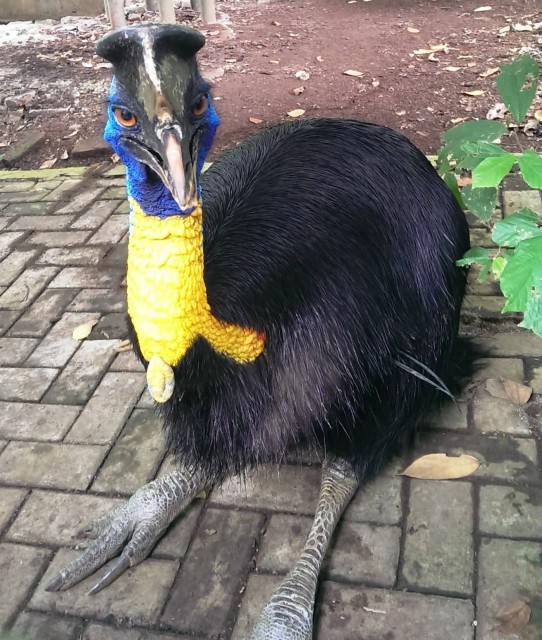 As with other cassowaries, it is a shy and solitary bird. Their diet consists mainly of fruits and small animals. They make grunting and hissing sounds, like other cassowaries. In breeding season, the polygamous female lays three to five green eggs on a well camouflaged nest prepared by male, she leaves the nest and eggs to find another mate. The male raises the chicks alone for about nine months. 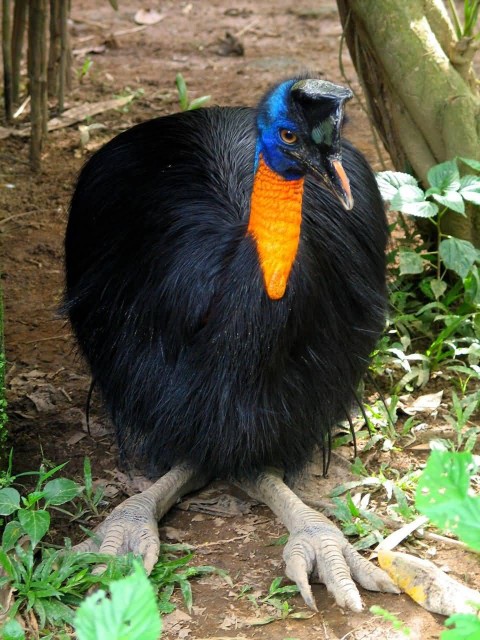