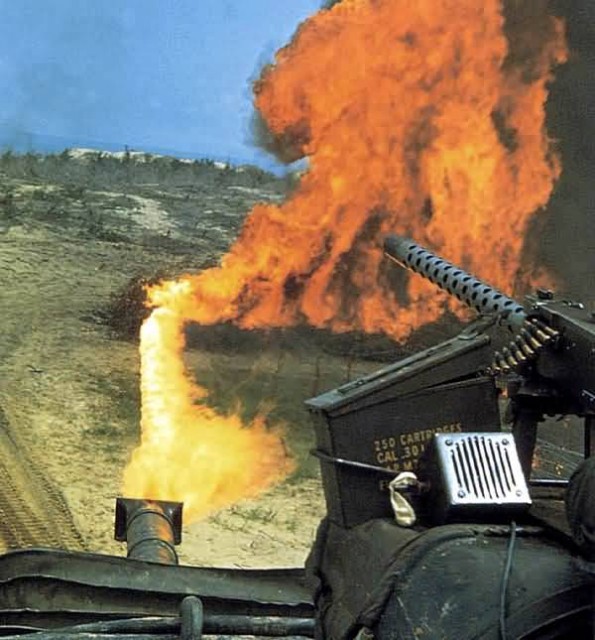 Most military flamethrowers use liquids but commercial flamethrowers tend to use high-pressure propane and natural gas, which is considered safer. They are used by the military and by people needing controlled burning capacity, such as in agriculture or other such land management tasks. They can be designed to be either carried by the operator or mounted on a vehicle. 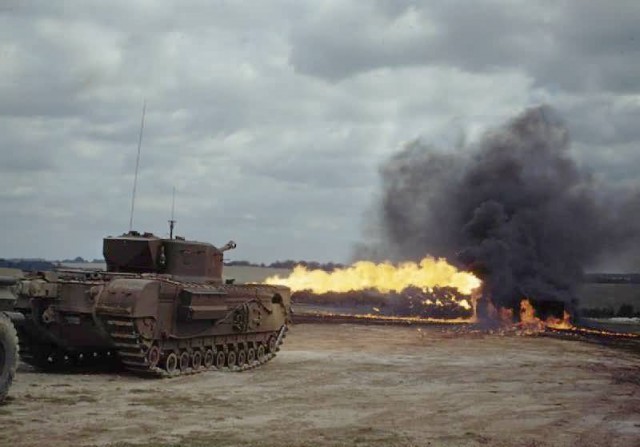 Modern light machine guns are designed to fire more rounds of a smaller caliber and, as such, tend to be belt-fed from a detachable box magazine, some such as the FN Minimi will also accept rifle magazine feeding as an auxiliary measure when belted ammunition has been exhausted. 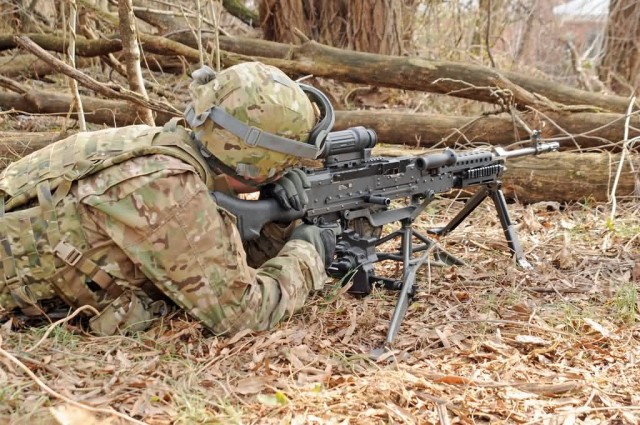 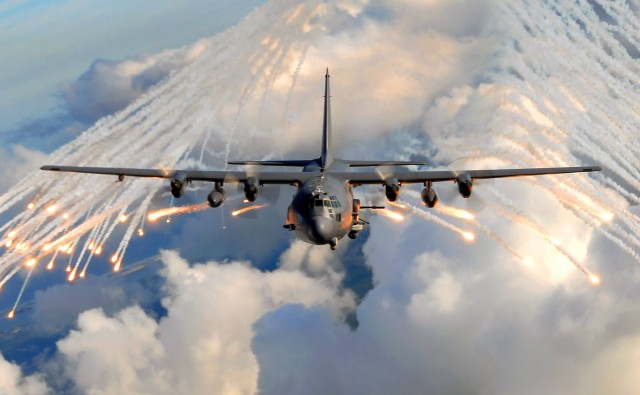 The Lockheed AC-130 gunship is a heavily armed ground-attack aircraft variant of the C-130 Hercules transport plane. The basic airframe is manufactured by Lockheed, while Boeing is responsible for the conversion into a gunship and for aircraft support. The AC-130A Gunship II superseded the AC-47 Gunship I during the Vietnam War.

The gunship’s sole user is the United States Air Force, which uses AC-130U Spooky and AC-130W Stinger II variants for close air support, air interdiction and force protection with AC-130J Ghostrider in development. Close air support roles include supporting ground troops, escorting convoys and urban operations. Weaponry is mounted to fire from the port side of the non-pressurised aircraft. 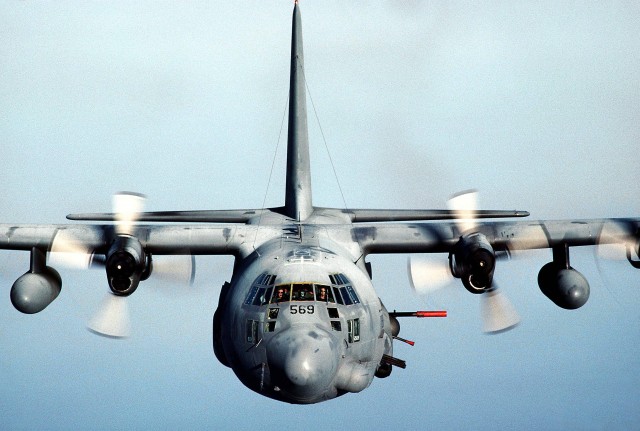 During an attack the gunship performs a pylon turn, flying in a large circle around a target, allowing it to fire for far longer than conventional attack aircraft. The AC-130H Spectre was armed with two 20 mm M61 Vulcan cannons, one Bofors 40mm autocannon, and one 105 mm M102 cannon; after 1994 the 20 mm cannons were removed for most missions.

The upgraded AC-130U “Spooky” has a single 25 mm GAU-12 Equalizer in place of the Spectre’s twin 20 mm cannons, an improved fire control system, and increased ammunition capacity. New AC-130Js based on the MC-130J Combat Shadow II special operations tanker were planned as of 2012. The AC-130W is armed with one 30 mm Bushmaster cannon, AGM-176 Griffin missiles, and GBU-39 Small Diameter Bombs. 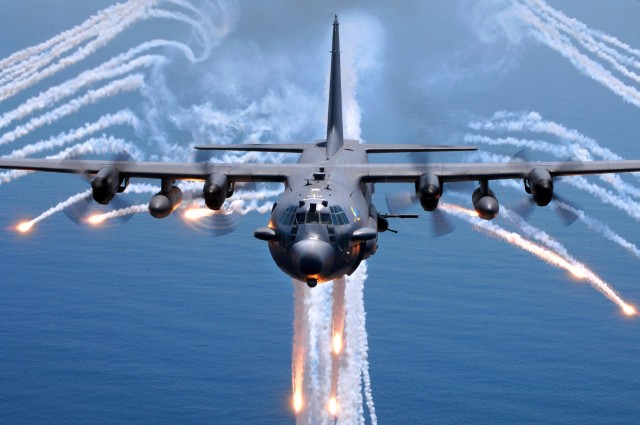 The DSR-50 is a bolt-action anti-materiel rifle developed and marketed by DSR-precision GmbH of Germany and is essentially an upscaled DSR-1 chambered in .50 BMG. Manufactured by DSR-Precision GmbH, the DSR-50 is based on the DSR-1 sniper rifle and includes modifications necessary to the fire the more powerful .50 caliber round, in clouding hydraulic recoil buffer in the buttstock and another innovative muzzle attachment.

This muzzle device, described as a ‘blast compensator’ is a combination sound suppressor and muzzle brake and is notable in its attempt at moderating the .50BMG’s muzzle blast and recoil, unlike contemporary large-caliber rifles which are typically equipped with muzzle brakes only.

Like the DSR-1, this rifle retains its bullpup configuration, allowing a longer barrel while retaining a shorter OAL, which is an important consideration for large caliber rounds such as .50 BMG and focuses the weapon’s balance towards the buttstock, compensating for the muzzle heavy attachments standard on the DSR-50. The DSR-50 also retains some of the DSR-1’s features, such as a top mounted bipod, monopod, free-floating barrel, fully adjustable cheekrest, buttstock and foregrip, and forward magazine holder. 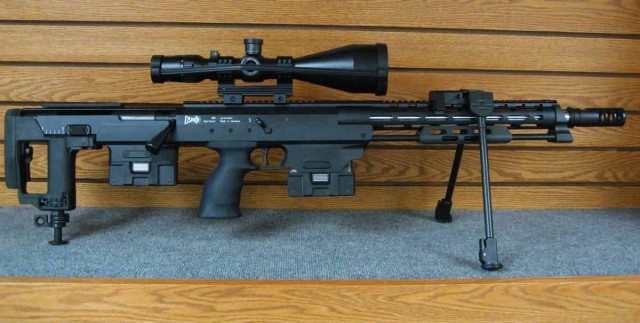 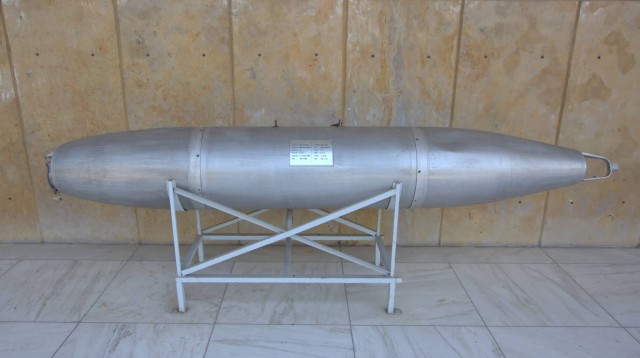 Napalm is flammable liquid used in warfare. It is a mixture of a gelling agent and petroleum or a similar fuel. It was initially used as an incendiary device against buildings and later primarily as an anti-personnel weapon, as it sticks to skin and causes severe burns when on fire.

Napalm was developed in 1942 in a secret laboratory at Harvard University by a team led by chemist Louis Fieser. Its first recorded use was in the European theatre of war during World War II. It was used extensively by the United States in incendiary attacks on Japanese cities in World War II as well as during the Vietnam War. 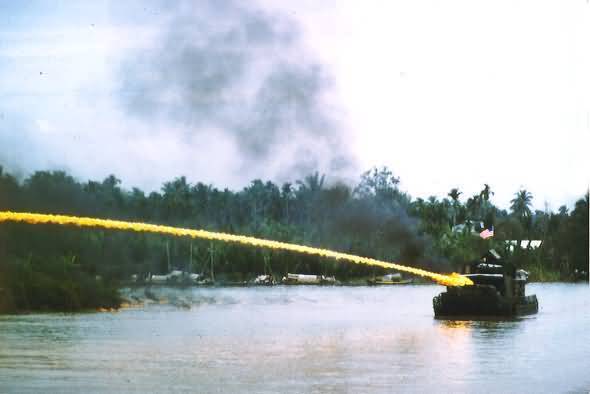 “Napalm” is a combination of the names of two of the constituents of the thickening/gelling agent: co-precipitated aluminium salts of naphthenic and palmitic acids. “Napalm B” is the more modern version of napalm and, although distinctly different in its chemical composition, is often referred to simply as “napalm”. 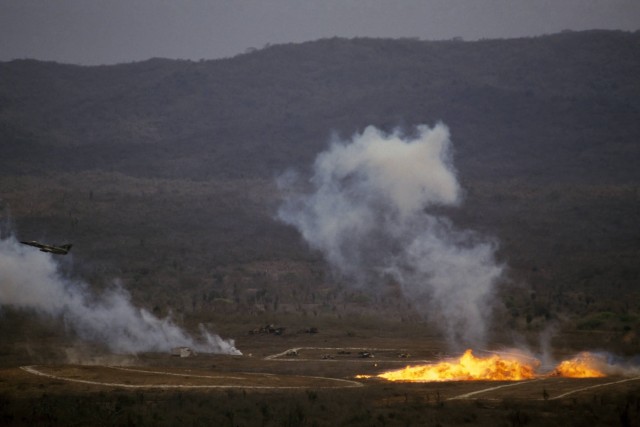 The AK-47 is a selective-fire, gas-operated 7.62×39mm assault rifle, developed in the Soviet Union by Mikhail Kalashnikov. It is officially known in the Soviet documentation as Avtomat Kalashnikova. It is also known as Kalashnikov, AK, or in Russian slang, Kalash. Design work on the AK-47 began in the last year of World War II. After the war in 1946, the AK-47 was presented for official military trials.

In 1948, the fixed-stock version was introduced into active service with selected units of the Soviet Army. An early development of the design was the AKS, which was equipped with an underfolding metal shoulder stock. 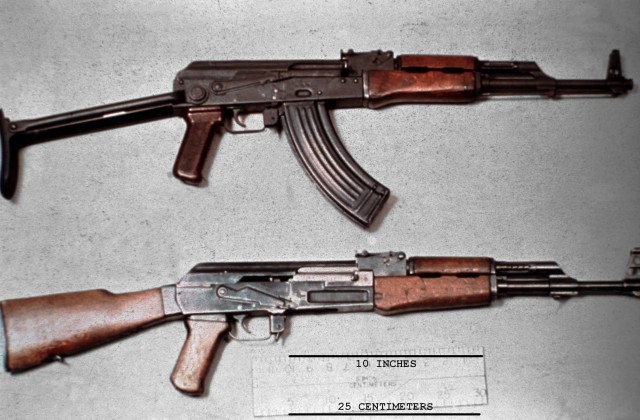 In 1949, the AK-47 was officially accepted by the Soviet Armed Forces and used by the majority of the member states of the Warsaw Pact. Even after six decades the model and its variants remain the most popular and widely used assault rifles in the world because of their substantial reliability under harsh conditions, low production costs compared to contemporary Western weapons, availability in virtually every geographic region and ease of use.

The AK-47 has been manufactured in many countries and has seen service with armed forces as well as irregular forces worldwide and was the basis for developing many other types of individual and crew-served firearms. As of 2004, out of the estimated 500 million firearms worldwide, approximately 100 million belong to the Kalashnikov family, three-quarters of which are AK-47s.

The FN F2000 is a 5.56×45mm NATO bullpup assault rifle, designed by FN Herstal in Belgium. The F2000 made its debut in March 2001 at the IDEX defence exhibition held in Abu Dhabi in the United Arab Emirates. The F2000 is a gas operated, fully automatic and ambidextrous bullpup rifle.

Both the safety system and trigger mechanism were adopted from the P90 personal defense weapon; the selector toggle is a rotating disc located below the trigger. The fire selector doubles as the weapon’s manual safety and secures the firearm against accidental discharge. The “safe” setting disables the trigger. The hammers, group pins and springs are steel while all other components are nylon injection molding. The shell of the rifle is made of composite materials. 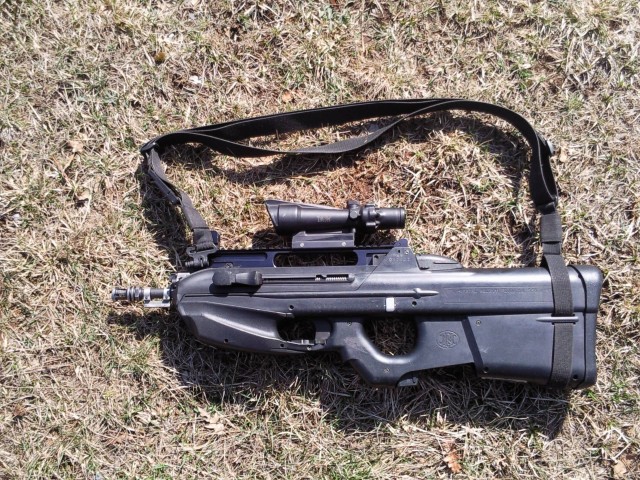 The BAE Systems Taranis is a British demonstrator programme for Unmanned Combat Air Vehicle technology, under development primarily by the defence contractor BAE Systems Military Air & Information. The aircraft, which is named after the Celtic god of thunder Taranis, first flew in 2013.

A semi-autonomous unmanned warplane, the Taranis is designed to fly intercontinental missions, and will carry a variety of weapons, enabling it to attack both aerial and ground targets. It will utilise stealth technology, giving it a low radar profile, and it will be controllable via satellite link from anywhere on Earth. An operational derivative of the Taranis is expected to enter military service some time after 2030. 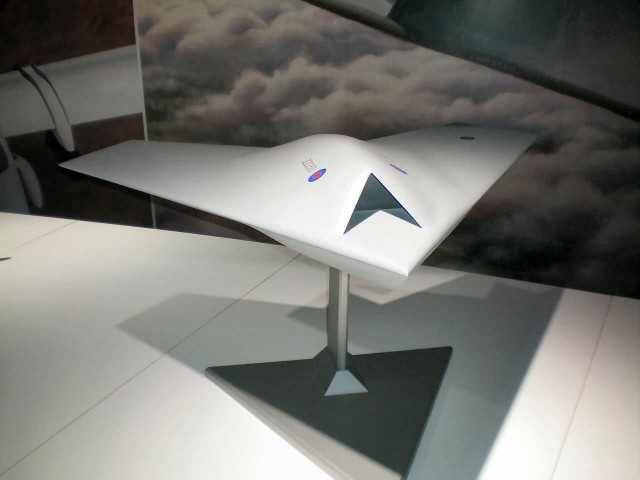 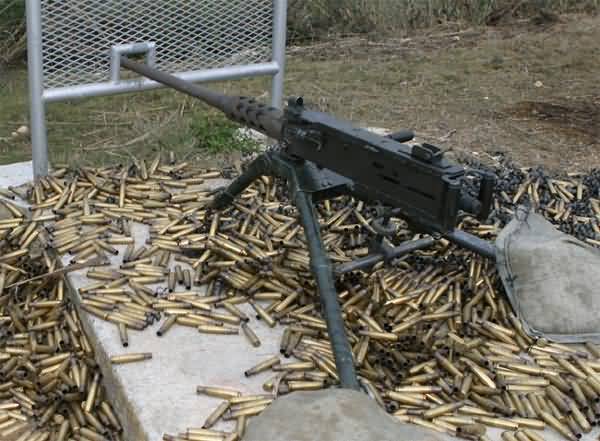 The second is large-caliber machine guns, pioneered by John Moses Browning with the M2 machine gun, designed to provide increased range, penetration and destructive power against vehicles, buildings, aircraft and light fortifications beyond the standard rifle calibers used in medium or general-purpose machine guns or the intermediate cartridges used in light machine guns. 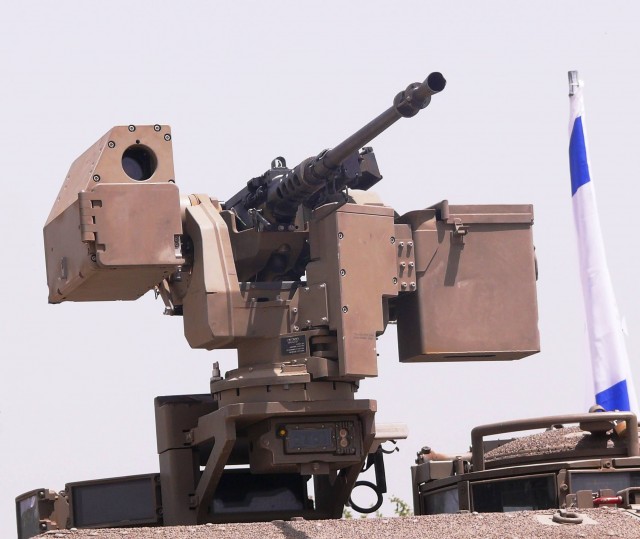 The Lockheed Martin F-22 Raptor is a single-seat, twin-engine, all weather stealth tactical fighter aircraft developed for the United States Air Force. The result of the USAF’s Advanced Tactical Fighter program, the aircraft was designed primarily as an air superiority fighter but has additional capabilities including ground attack, electronic warfare and signals intelligence roles.

Lockheed Martin is the prime contractor and was responsible for the majority of the airframe, weapon systems and final assembly of the F-22, while program partner Boeing provided the wings, aft fuselage, avionics integration and training systems. The aircraft was variously designated F-22 and F/A-22 prior to formally entering service in December 2005 as the F-22A. Despite a protracted development as well as operational issues, the USAF considers the F-22 a critical component of its tactical air power and states that the aircraft is unmatched by any known or projected fighter.

The Raptor’s combination of stealth, aerodynamic performance, and situational awareness gives the aircraft unprecedented air combat capabilities. Air Chief Marshal Angus Houston, former Chief of the Australian Defence Force, said in 2004 that the “F-22 will be the most outstanding fighter plane ever built.”

The high cost of the aircraft, a lack of clear air-to-air missions due to delays in Russian and Chinese fighter programs, a ban on exports and development of the more versatile and lower cost F-35 led to the end of F-22 production. A final procurement tally of 187 operational production aircraft was established in 2009 and the last F-22 was delivered to the USAF in 2012. 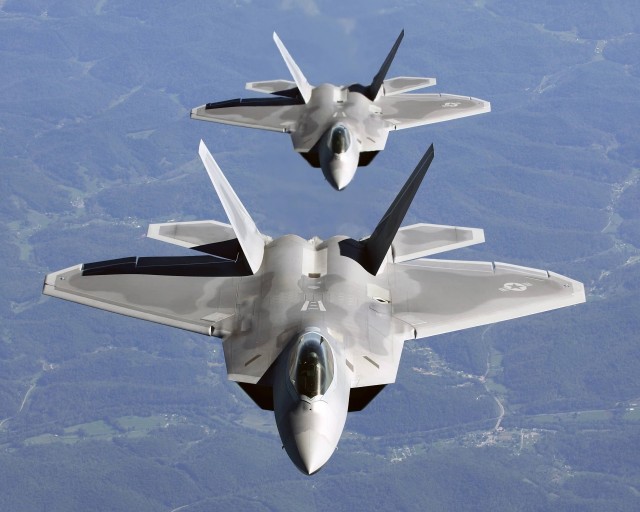