5 Most Exciting Fighters In The World 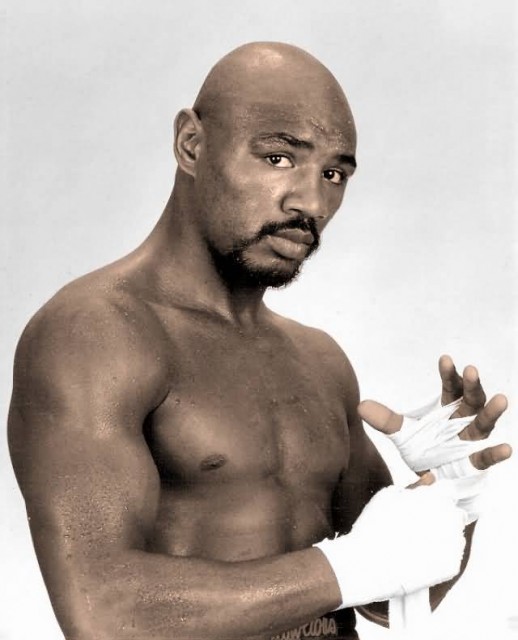 Marvelous Marvin Hagler (born Marvin Nathaniel Hagler; May 23, 1954) is an American former professional boxer who was Undisputed World Middleweight Champion from 1980 to 1987. Hagler made twelve undisputed title defenses and holds the highest KO% of all middleweight champions at 78%. At six years and seven months, his reign as undisputed middleweight champion is the second longest of the last century, behind only Tony Zale. In 1982, annoyed that network announcers often did not refer to him by his nickname, “Marvelous”, Hagler legally changed his name to “Marvelous Marvin Hagler.” Hagler is an inductee of the International Boxing Hall of Fame and the World Boxing Hall of Fame.

Julio César Chávez González (Born July 12, 1962) is a retired Mexican professional boxer. He is considered by acclamation as the greatest Mexican fighter of all time and as one of the best boxers of all time. Chávez is a six-time world champion in three weight divisions, and for several years he was considered the best pound-for-pound fighter in the world.

His record was 89-0-1 going into his first official loss to Frankie Randall and had an 87 fight win streak until his draw with Pernell Whitaker. Chávez also set the record for the largest attendance for a boxing match, with 132,274 people at the Estadio Azteca against Greg Haugen in 1993.

Julio César Chávez was known for his outstanding punching power, devastating body attack, remarkably strong chin and his relentless stalking on the opponents. He ranks 24 on ESPN’s 50 Greatest Boxers Of All Time. On December 7, 2010, he was inducted in the prestigious International Boxing Hall of Fame for the Class of 2011. He is the father of prospect Omar Chávez and former WBC Middleweight Champion Julio César Chávez, Jr. 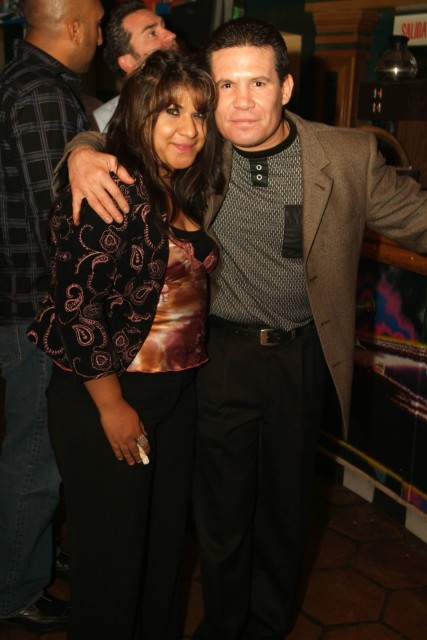 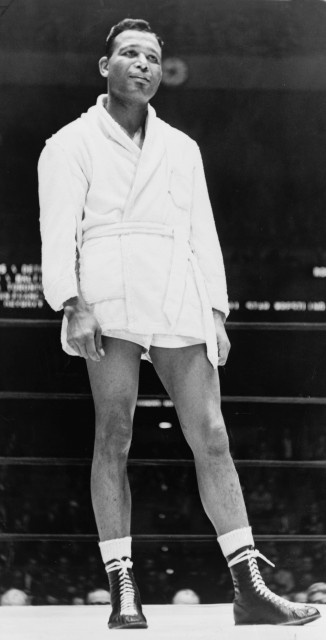 Sugar Ray Robinson (May 3, 1921 – April 12, 1989) was an American professional boxer. Frequently cited as the greatest boxer of all time, Robinson’s performances in the welterweight and middleweight divisions prompted sportswriters to create “pound for pound” rankings, where they compared fighters regardless of weight. He was inducted into the International Boxing Hall of Fame in 1990. Robinson was 85–0 as an amateur with 69 of those victories coming by way of knockout, 40 in the first round. He turned professional in 1940 at the age of 19 and by 1951 had a professional record of 128–1–2 with 84 knockouts. From 1943 to 1951 Robinson went on a 91 fight unbeaten streak, the third longest in professional boxing history.

Robinson was named “fighter of the year” twice: first for his performances in 1942, then nine years and over 90 fights later, for his efforts in 1951. Renowned for his flamboyant lifestyle outside the ring, Robinson is credited with being the originator of the modern sports “entourage”. After his boxing career ended, Robinson attempted a career as an entertainer, but struggled, and was challenged financially until his death in 1989. In 2006, he was featured on a commemorative stamp by the United States Postal Service. 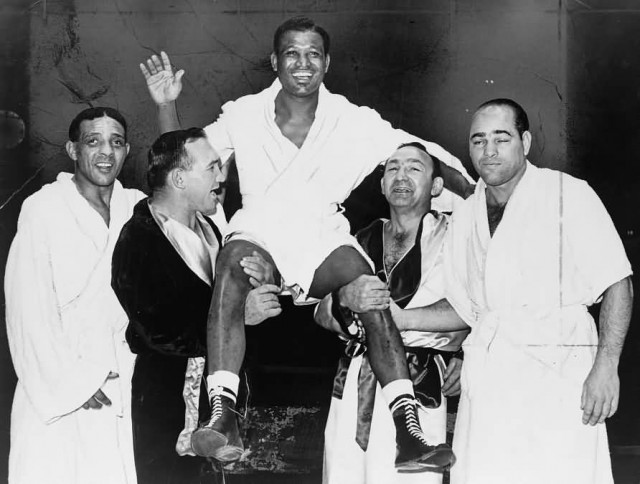 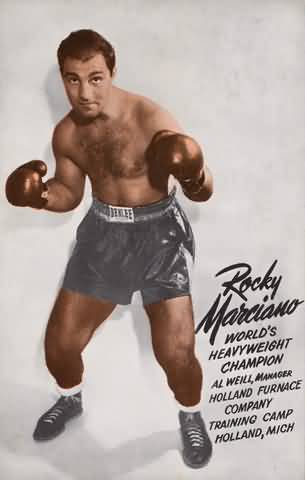 Rocky Marciano (born September 1, 1923 – August 31, 1969) was an American professional boxer and the World Heavyweight Champion from September 23, 1952, to April 27, 1956. Marciano is the only person to hold the heavyweight title without a bout tie or defeat during his entire career. Marciano defended his title six times, against Jersey Joe Walcott, Roland La Starza, Ezzard Charles (twice), Don Cockell, and Archie Moore.

Marciano had a short, blazing career usually accustomed to pressure fighters, and at the end of it he retired with a record of 49-0, a record which stands to this day. Known for his relentless style, incredible stamina and a cast iron chin, Marciano has been ranked by many boxing historians as one of the best heavyweight boxers of all time. He was also known for his ferocious punching power, for a man of just 190 pounds; his knockout percentage of 87.75 is the highest in heavyweight history. 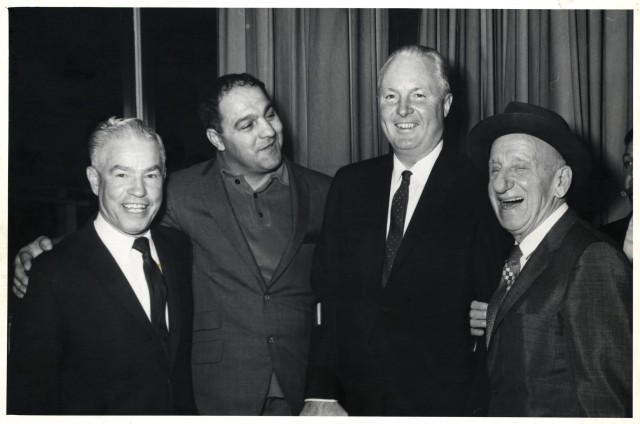 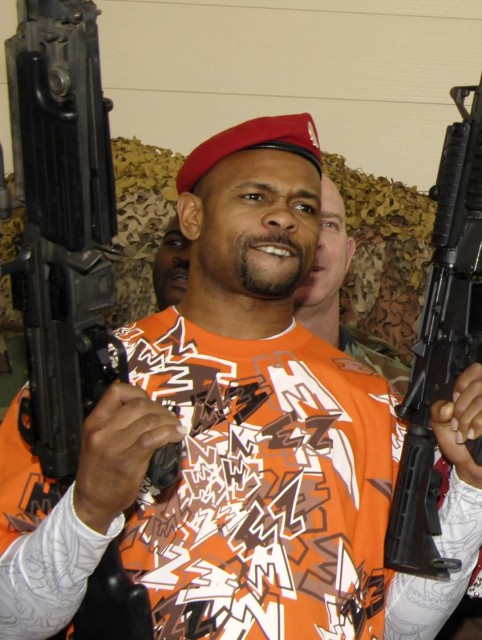 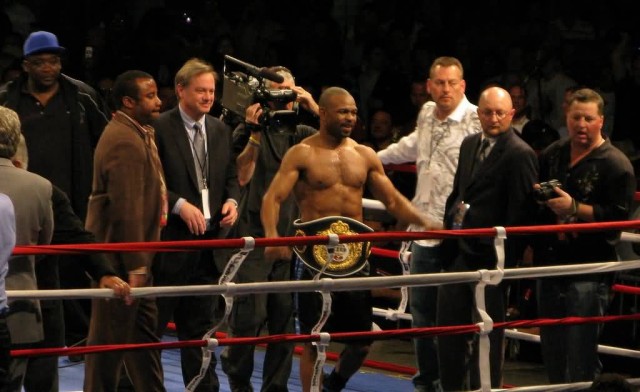