8 Most Beautiful Eye-Catching Waterfalls In The World 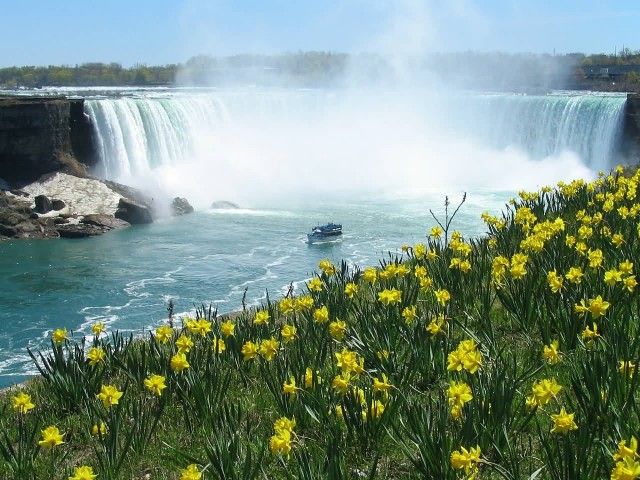 Niagara Falls is the collective name for three waterfalls that straddle the international border between Canada and the United States, more specifically, between the province of Ontario and the state of New York. From largest to smallest, the three waterfalls are the Horseshoe Falls, the American Falls and the Bridal Veil Falls. The Niagara Falls are renowned both for their beauty and as a valuable source of hydroelectric power. The Niagara Falls are both a daytime and evening attraction to visitors. From the Canadian side, floodlights illuminate both sides of the falls for several hours after dark. 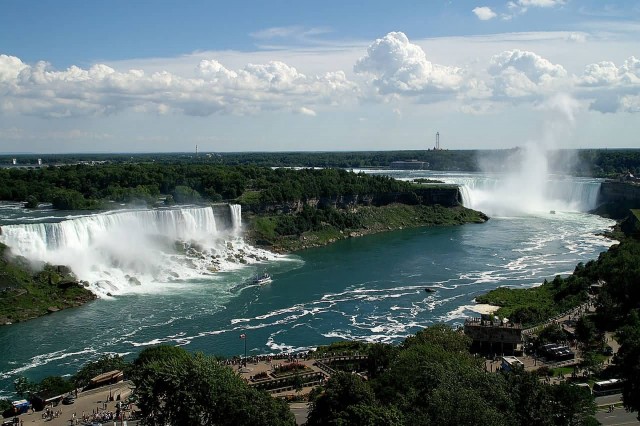 The oldest and best known tourist attraction at Niagara Falls is the Maid of the Mist boat cruise, which has carried passengers into the rapids immediately below the falls since 1846. Cruise boats operate from boat docks on both sides of the falls. From the U.S. side, the American Falls can be viewed from walkways along Prospect Point Park. Goat Island offers more views of the falls and is accessible by foot and automobile traffic by bridge above the American Falls. 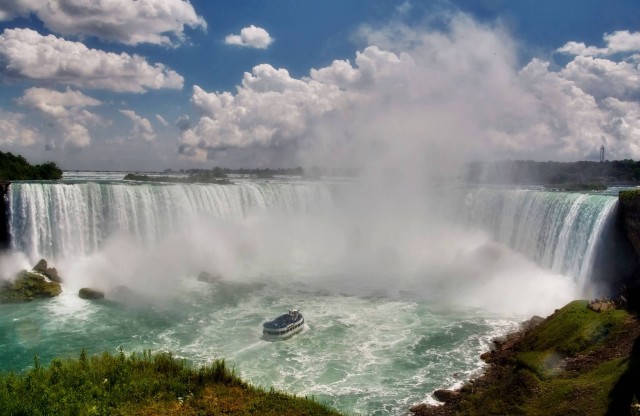 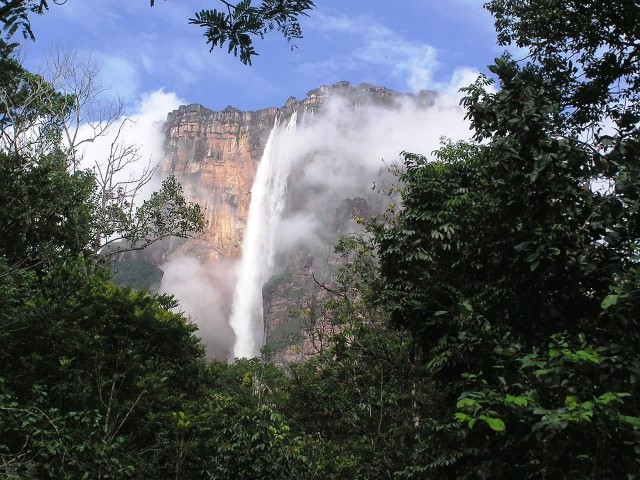 Angel Falls is a waterfall in Venezuela. It is the world’s highest uninterrupted waterfall, with a height of 979 m. The waterfall drops over the edge of the Auyantepui mountain in the Canaima National Park, a UNESCO World Heritage site in the Gran Sabana region of Bolívar State. The falls are on the Gauja River, which flows into the Churun River, a tributary of the Carrao River. The waterfall has been known as the “Angel Falls” since the mid-20th century. They are named after Jimmie Angel, a US aviator, who was the first person to fly over the falls. 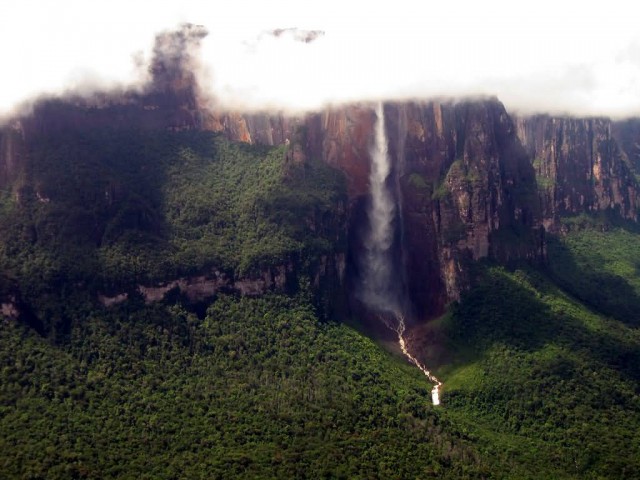 Angel Falls is one of Venezuela’s top tourist attractions, though a trip to the falls is a complicated affair. The falls are located in an isolated jungle. A flight from Puerto Ordaz or Ciudad Bolívar is required to reach Canaima camp, the starting point for river trips to the base of the falls. River trips generally take place from June to December, when the rivers are deep enough for the used by the Pemon guides. During the dry season (December to March) there is less water seen than in the other months. 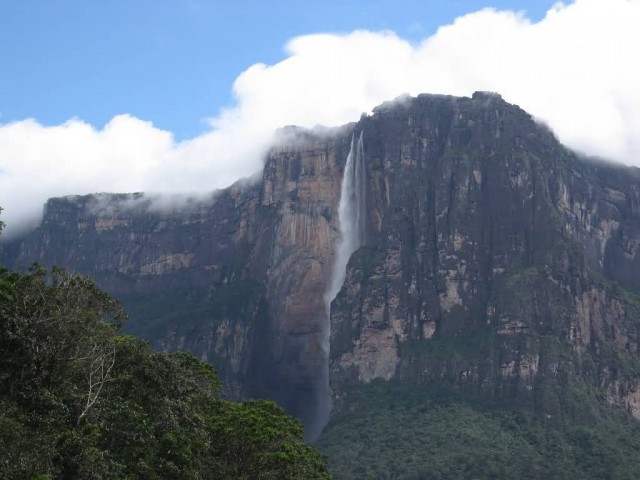 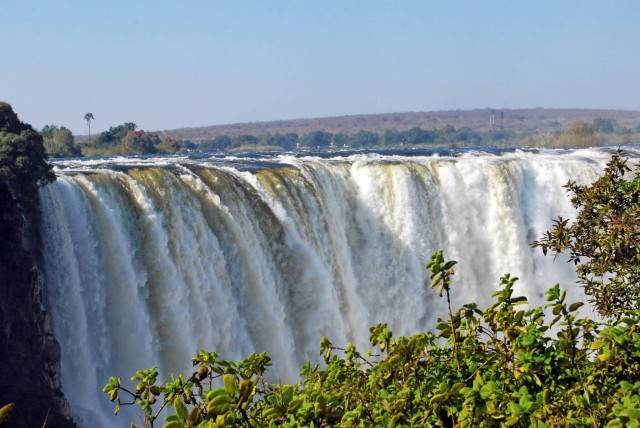 Victoria Falls or Mosi-oa-Tunya is a waterfall in southern Africa on the Zambezi River at the border of Zambia and Zimbabwe. While it is neither the highest nor the widest waterfall in the world, it is classified as the largest, based on its width of 1,708 metres and height of 108 metres, resulting in the world’s largest sheet of falling water. Victoria Falls is roughly twice the height of North America’s Niagara Falls and well over twice the width of its Horseshoe Falls. In height and width Victoria Falls is compete with only by Argentina and Brazil’s Iguazu Falls. 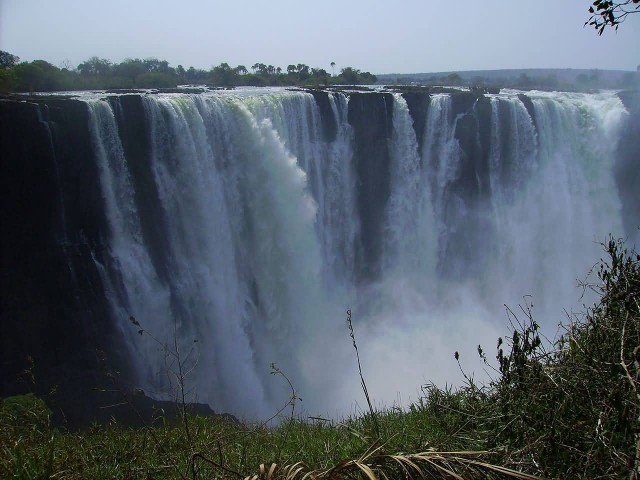 The two national parks at the falls are relatively small: Mosi-oa-Tunya National Park is 66 square kilometres and Victoria Falls National Park is 23 square kilometres. Unlike the game parks, Victoria Falls has more Zimbabwean and Zambian visitors than international tourists. The attraction is accessible by bus and train. A famous feature is the naturally formed “Armchair” (now sometimes called “Devil’s Pool”), near the edge of the falls on Livingstone Island on the Zambian side. 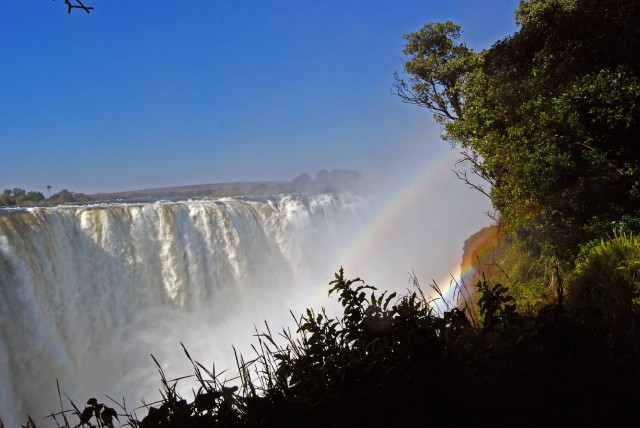 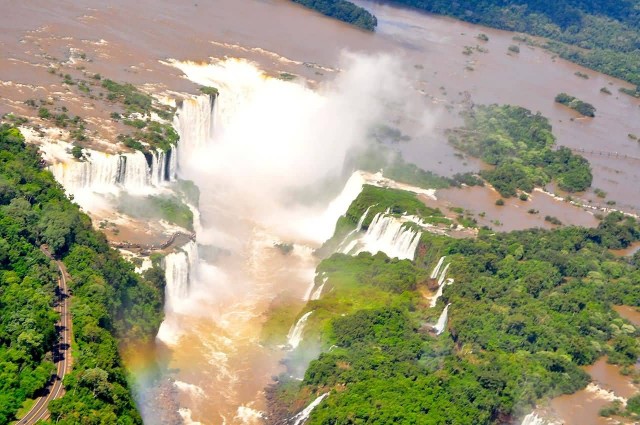 Iguazu Falls are waterfalls of the Iguazu River on the border of the Argentina province of Misiones and the Brazilian state of Paraná. The falls divide the river into the upper and lower Iguazu. The Iguazu River rises near the city of Curitiba. The number of these smaller waterfalls fluctuates from 150 to 300, depending on the water level. Approximately half of the river’s flow falls into a long and narrow chasm called the Devil’s Throat. The Devil’s Throat is U-shaped, 82 metres high, 150 m wide and 700 m long. The falls may be reached from two main towns with one on either side of the falls: Puerto Iguazú in Argentina and Foz do Iguaçu in Brazil. 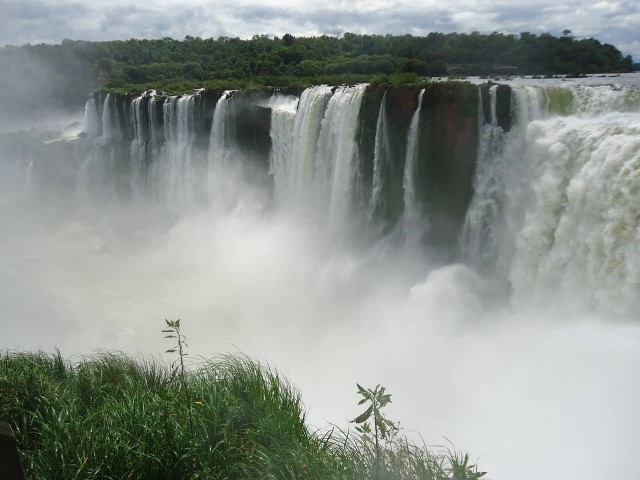 The falls are shared by the Iguazú National Park (Argentina) and Iguaçu National Park (Brazil). The two parks were designated UNESCO World Heritage Sites in 1984 and 1987, respectively. On the Brazilian side, there is a walkway along the canyon with an extension to the lower base of Devil’s Throat. Helicopter rides offering aerial views of the falls have been available from Brazil. The Argentine access, across the forest, is by a Rainforest Ecological Train very similar to the one in Disney’s Animal Kingdom. The train brings visitors to the entrance of Devil’s Throat as well as the upper and lower trails. 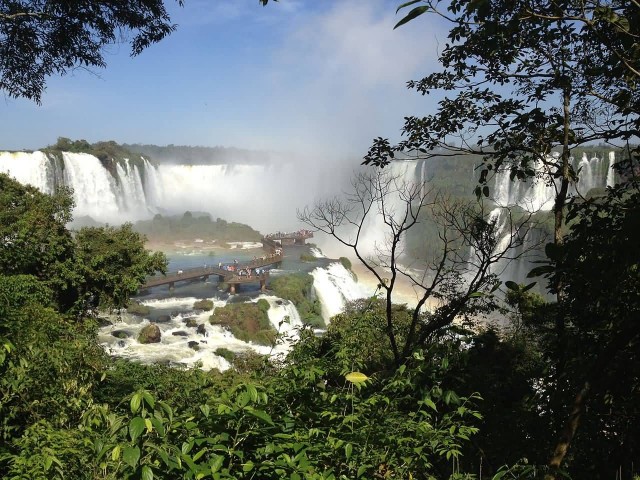 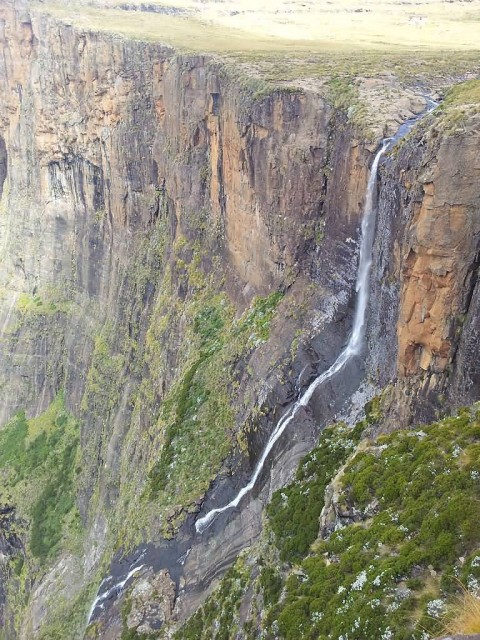 Tugela Falls Tugela Falls is a complex of seasonal waterfalls located in the Drakensberg (Dragon’s Mountains) of Royal Natal National Park in KwaZulu-Natal Province, Republic of South Africa. It is generally accepted as the world’s second-tallest waterfall. The combined total drop of its five distinct free-leaping falls is 948 m. At the right time of year, they are easily visible from the main road into the park, especially after a heavy rain. There are two trails to Tugela Falls. The most spectacular trail is to the top of Mont-Aux-Sources, which starts at “The Sentinel” car park.

From here it is a relatively easy climb to the top of the Amphitheatre, however it does take about 4.5 to 8 hours round-trip depending on fitness level. This is the only day hiking trail which leads to the top of the Drakensberg escarpment. Another trail to the foot of the Tugela Falls starts at Royal Natal National Park. The easy 7 km gradient up the Tugela Gorge winds though indigenous forests. The last part of the hike to Tugela Falls is a boulder hop. A little chain ladder leads over the final stretch for a view of the falls rushing down the amphitheater in a series of five cascades. 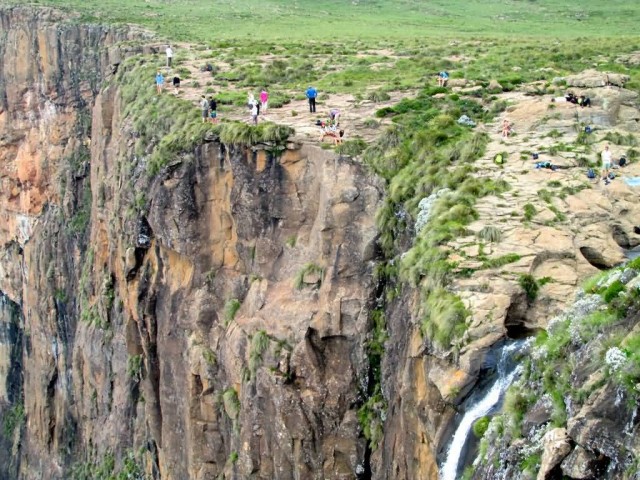 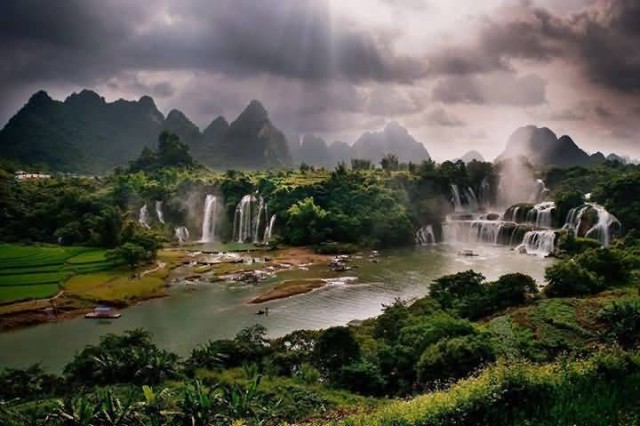 Ban Gioc – Detian Falls is a collective name for two waterfalls on the Quây Sơn River, that straddle the international border between China and Vietnam. More specifically located between the Karst hills of Daxin County, Guangxi and Trùng Khánh District, Cao Bằng Province. The waterfall is 272 km north of Hanoi. Over thousands of years the waterfall has eroded its crest and slowly moved upstream. It currently appears to be two waterfalls most of the time but when the river is swollen due to summer rains can form one fall again. The waterfall drops 30 m. 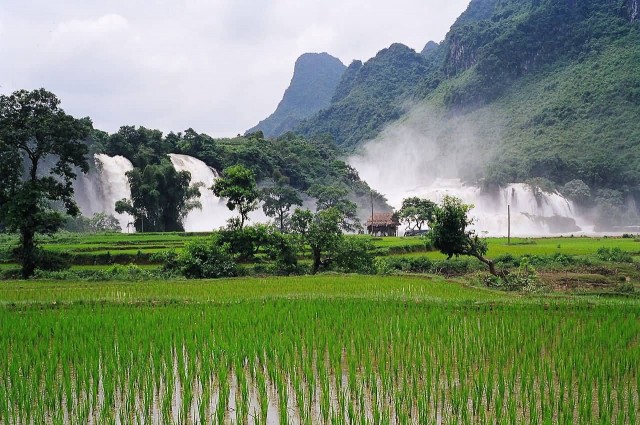 It is separated into three falls by rocks and trees and the thundering effect of the water hitting the cliffs can be heard from afar. It is currently the 4th largest waterfall along a national border, after Iguazu Falls, Victoria Falls and Niagara Falls. There are two directional aspects to transport at a waterfall: portage along the river’s course and fording or rafting across the river. The few Western tourists who have visited the falls enjoy the natural views and sounds. The waterfalls are visited by many people from China and Vietnam every year, being a shared natural treasure. 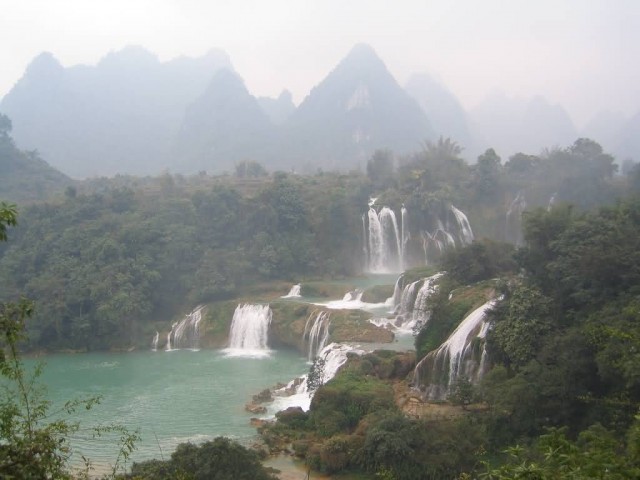 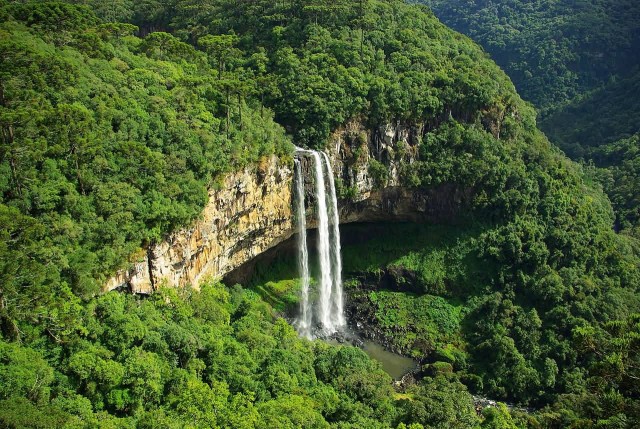 Caracol Falls is a 426-ft waterfall about 7 km from Canela, Brazil in Caracol State Park. It is formed by the Caracol River and cuts out of basalt cliffs in the Serra Geral mountain range, falling into the Vale da Lageana. The falls are situated between the pinheiral (pine forest) zone of the Brazilian Highlands and the southern coastal Atlantic Forest.

Caracol Falls has long attracted visitors and is the second most popular natural tourist attraction in Brazil, trailing only Iguazu Falls. In 2009, it received more than 289,000 visitors. There is a nearby 100-foot observation tower that offers an elevator and a panoramic view as well as a cable car that gives tourists an aerial view of the waterfall. The area also provides a restaurant and craft stalls. 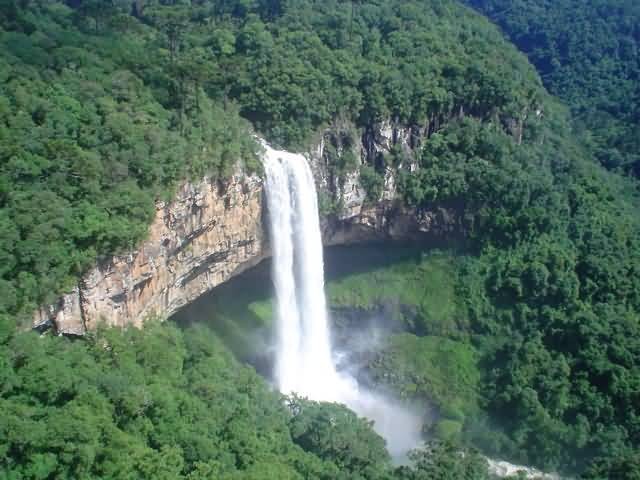 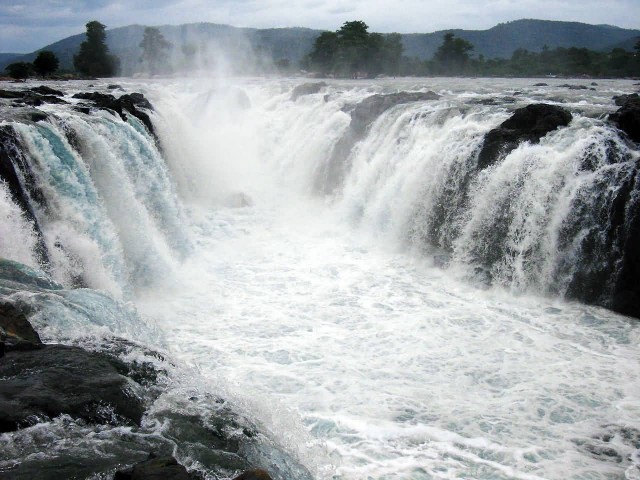 Hogenakkal Falls is a waterfall in South India on the river Kaveri. It is located in the Dharmapuri district of the southern Indian state of Tamil Nadu about 180 km from Bangalore and 46 km from Dharmapuri town. The word Hogenakal is formed of two Kannada words hoge and kal. When the water falls on the rocks it appears as if hoge (smoke) is emanating from the top of the kal (rock) because of the force of the water, hence Hogenakkal (smoking rocks). It is sometimes referred to as the “Niagara of India”. 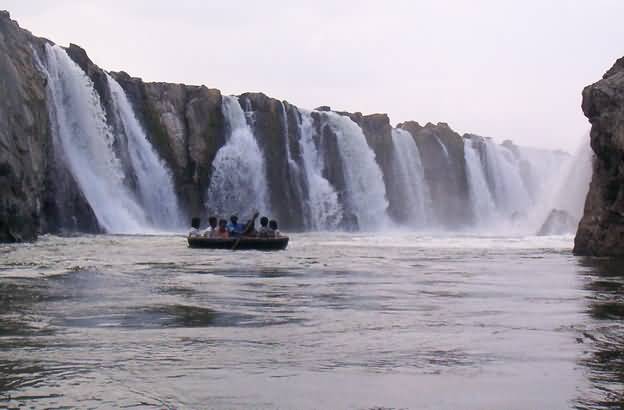 With its fame for medicinal baths and hide boat rides, it is a major site of tourist attraction. This is also the site of a proposed project to generate drinking water. Boating in Hogenakkal is allowed during the dry-season as the water falls are not strong enough to disrupt the passage of the boats. This is the main source of income for these boat operators. The best season to visit is soon after the monsoons, when the river is in full spate. But some tourists prefer to visit during off-season to skip the crowd. 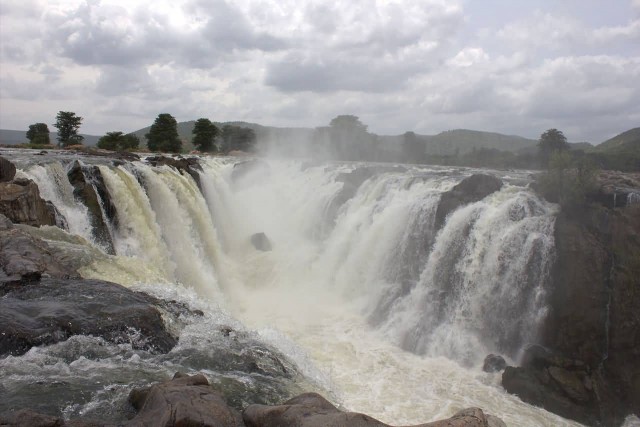