9 Sweet-Sounding Lovable Birds In The World 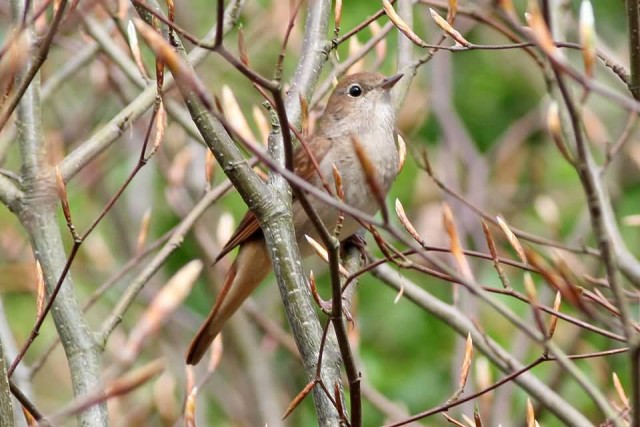 The common nightingale or simply nightingale also known as rufous nightingale is a small passerine bird best known for its powerful and beautiful song. Its song is particularly noticeable at night because few other birds are singing. This is why its name includes night in several languages. 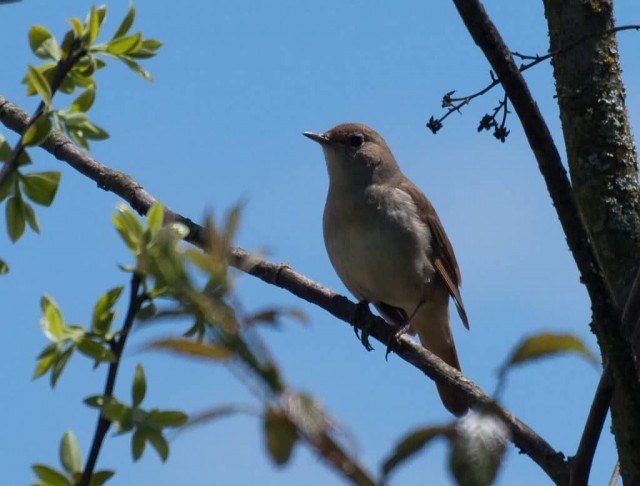 Nightingales sing even more loudly in urban or near-urban environments in order to overcome the background noise. The most characteristic feature of the song is a loud whistling crescendo absent from the song of thrush nightingale. It has a frog-like alarm call. The common nightingale has also been used as a symbol of poets or their poetry. 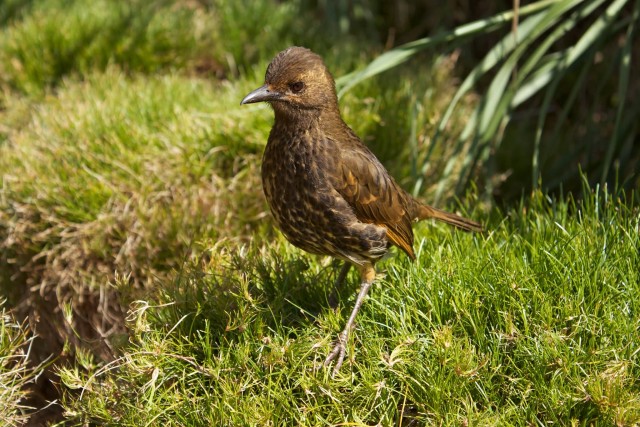 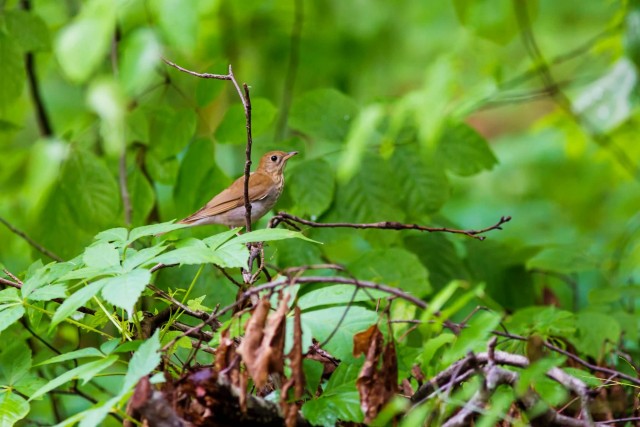 The veery is a small North American thrush species. This species measures 16–19.5 cm in length. Its mass is 26-39 g exceptionally up to 54 g. This bird has a breezy, downward-spiralling, flute-like song often given from a low and concealed perch. The most common call is a harsh descending vee-er which gave the bird its name. 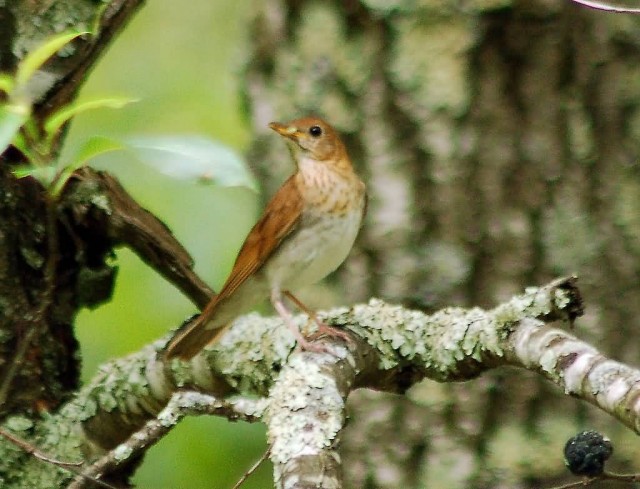 They forage on the forest floor flipping leaves to uncover insects they may fly up to catch insects in flight. They mainly eat insects and berries. They make a cup nest on the ground or near the base of a shrub. This bird has been displaced in some parts of its range by the related wood thrush. Veeries are occasional hosts for the eggs of brown-headed cowbirds. 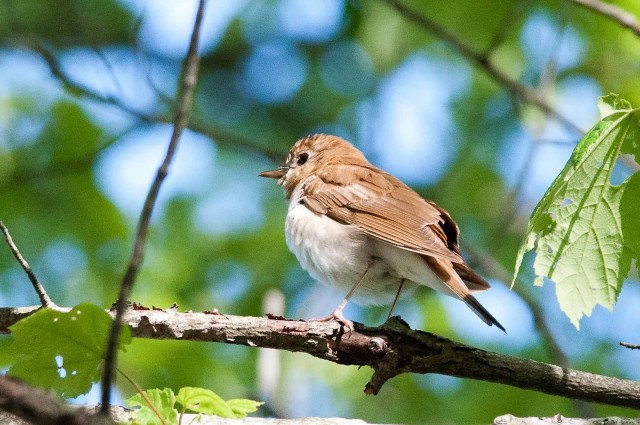 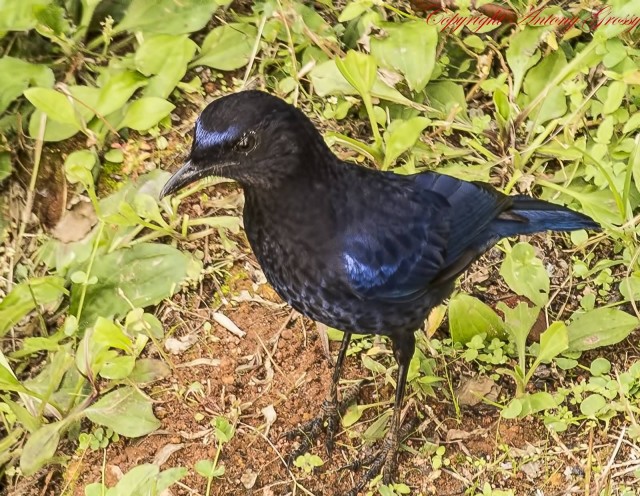 The Malabar whistling thrush is a whistling thrush in the family Muscicapidae. They are also known locally by the name of whistling schoolboy for the whistling calls that they make at dawn that have a very human quality. The species is a resident in the Western Ghats and associated hills of peninsular India including central India and parts of the Eastern Ghats. 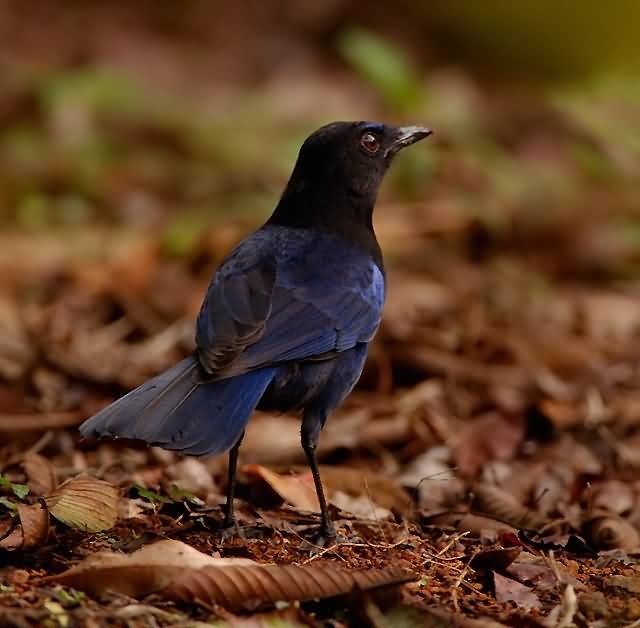 The birds breed from March to December and begins with the Monsoons. The base of the nest appeared to be cemented to the rock with mud. Mean nest height was 14.8 cm and depth 7.4 cm. The mean outer width and inner width were 21.5 cm and 13.1 cm respectively. Mean height from the ground was 125.8 cm. Most nest sites were about 6 m from water with 60% rock cover. The nests were mostly fully concealed and nesting success was directly related to it. 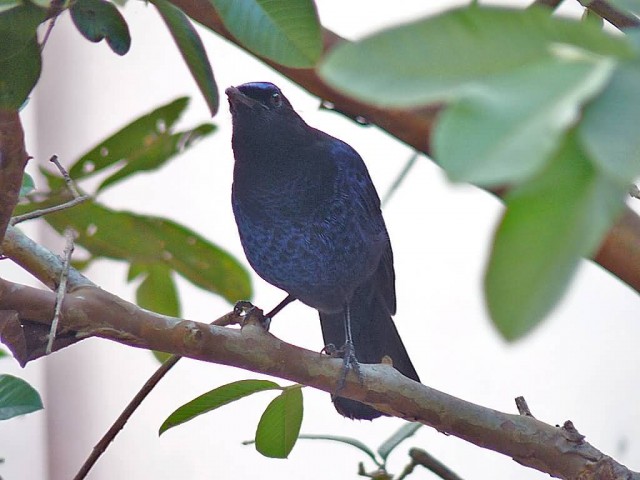 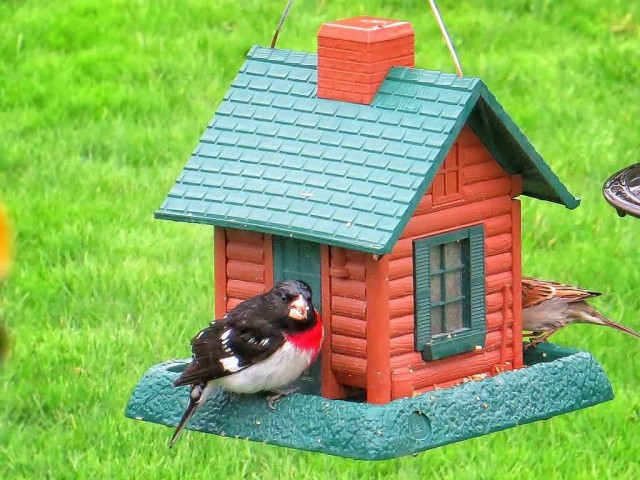 The rose-breasted grosbeak is a large insect-eating songbird in the cardinal family. It is primarily a foliage gleaner. It breeds in cool-temperate North America migrating to tropical America in winter. Adult birds are 18–22 cm long, span 29–33 cm across the wings and weigh 35–65 g. The adult male in breeding plumage has a black head, wings, back and tail and a bright rose-red patch on its breast the wings have two white patches and rose-red linings. 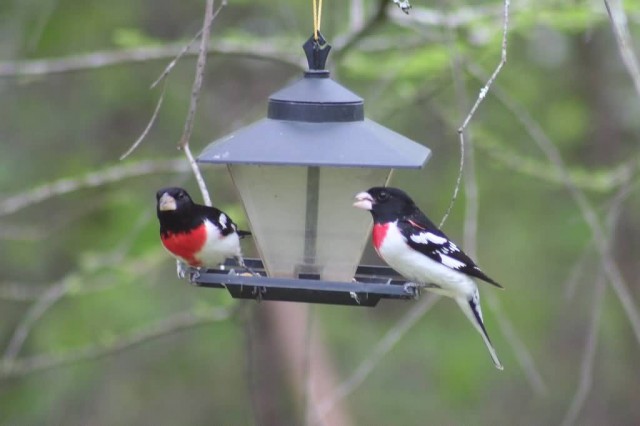 The adult female has dark grey-brown upper parts – darker on wings and tail, a white supercilium, a buff stripe along the top of the head and black-streaked white underparts which except in the center of the belly have a buff tinge. The wing linings are yellowish and on the upper wing there are two white patches like in the summer male. The rose-breasted grosbeak forages in shrubs or trees for insects, seeds and berries also catching insects in flight and occasionally eating nectar. Its maximum lifespan in the wild is 7.3 years. 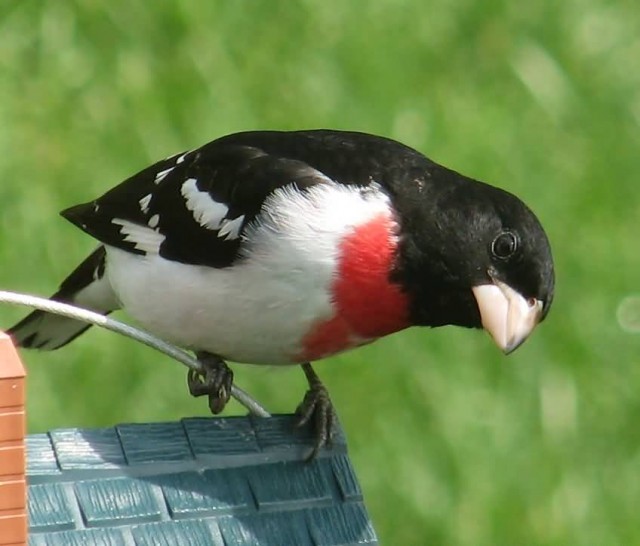 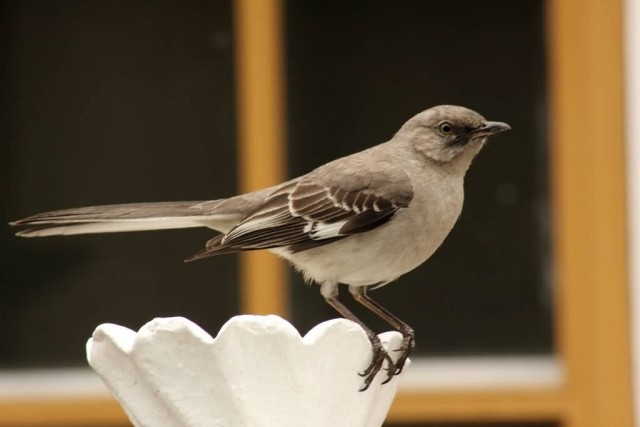 Mockingbirds are a group of New World passerine birds from the Mimidae family. They are best known for the habit of some species mimicking the songs of other birds and the sounds of insects and amphibians often loudly and in rapid succession. There are about 17 species in three genera. 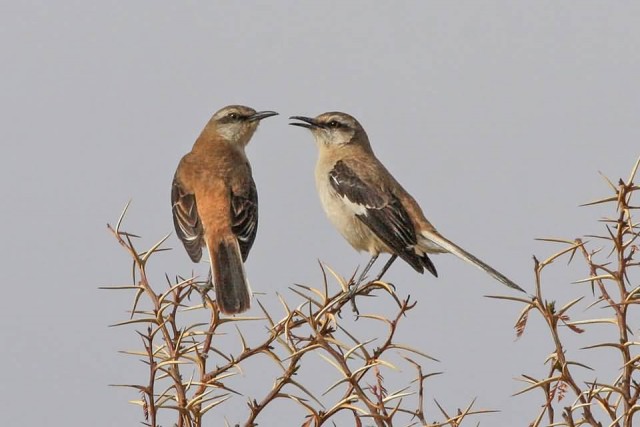 These do not appear to form a monophyletic lineage Mimus and Nesomimus are quite closely related their closest living relatives appear to be some thrashers such as the sage thrasher. Melanotis is more distinct it seems to represent a very ancient basal lineage of Mimidae. The only mockingbird commonly found in North America is the northern mockingbird. The Greek word polyglottos means multiple languages. 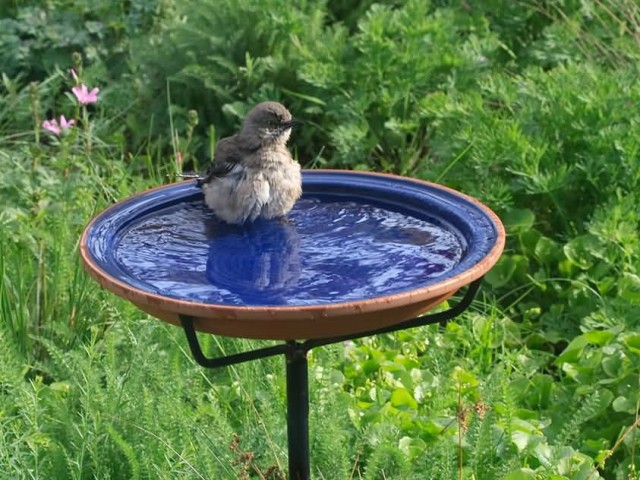 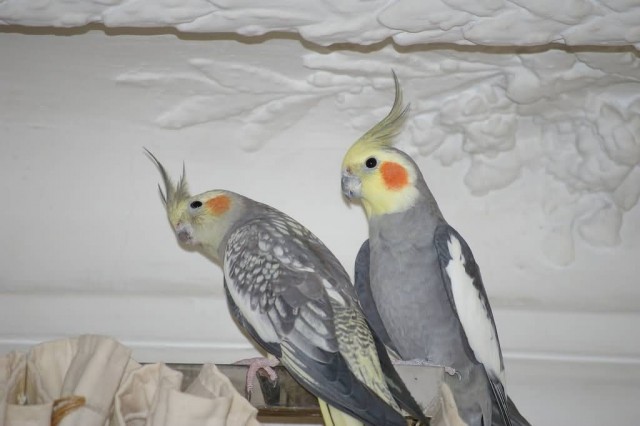 Cockatiels are generally regarded as good pets or companion parrots having a sweet demeanour though this is by no means guaranteed. Some birds are quite gregarious and sociable while others can be shy retreating to the back of the cage when an unfamiliar figure appears. 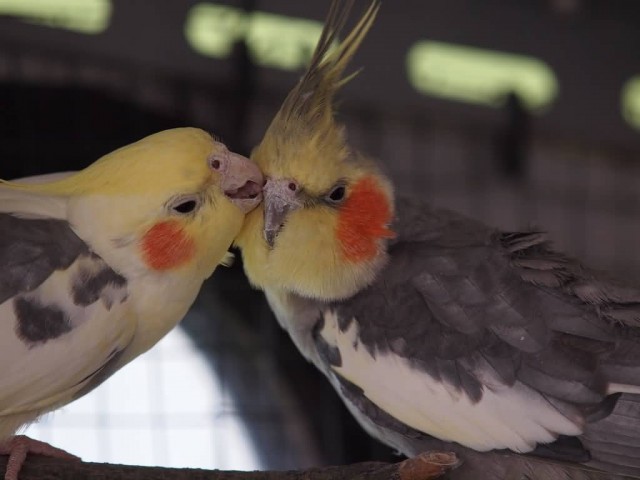 If handled often and if they have a patient owner cockatiels will become tame very quickly compared to some of the other parrot species cockatiels in their natural-habitats of Australia eat mainly grass seeds, captive cockatiels feed on either dry, sprouted and soaked seeds. 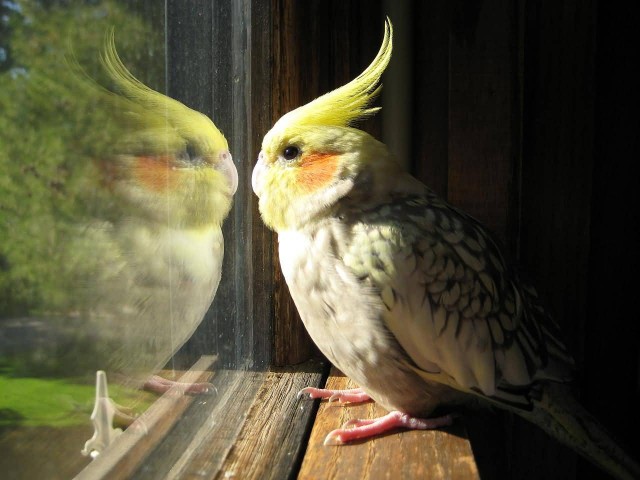 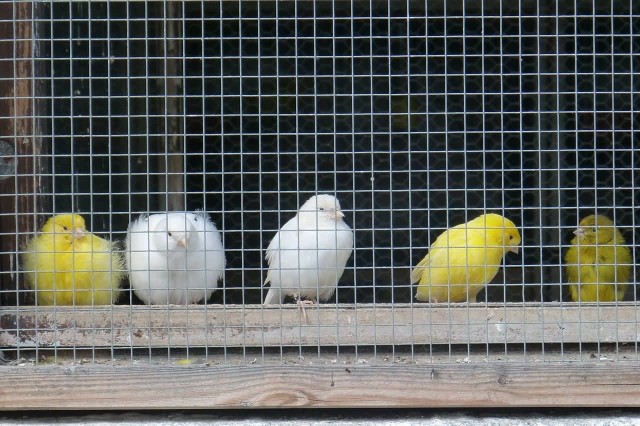 The yellow canary is a small passerine bird in the finch family. It is a resident breeder in much of the western and central regions of southern Africa and has been introduced to Ascension and St Helena islands. The yellow canary is typically 13 cm in length. The adult male colour ranges from almost uniform yellow in the northwest of its range to streaked olive backed birds in the southeast. The underparts rump and tail sides are yellow. 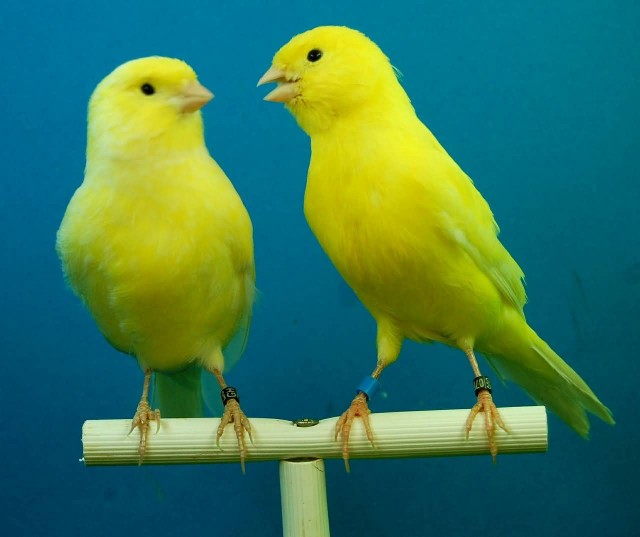 The female has grey-brown upper parts, black wings with yellow flight feathers and a pale supercilium. The underparts are white with brown streaking. The juvenile resembles the female but has heavier streaking. Its habitat is karoo and coastal or mountain valley scrub. It builds a compact cup nest in a scrub. The yellow canary is a common and gregarious seed eater. Its call is chissick or cheree and the song is a warbled zee-zeree-chereeo. 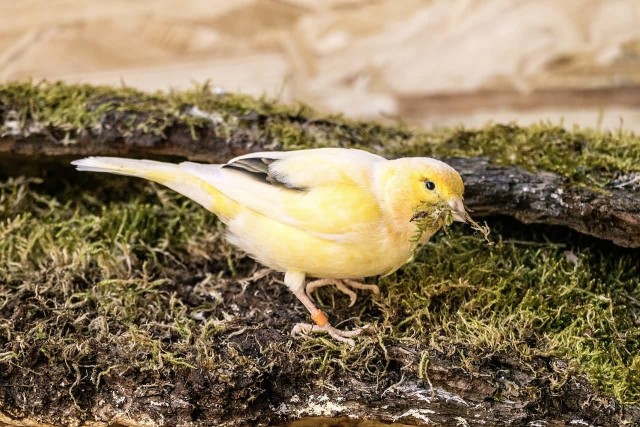 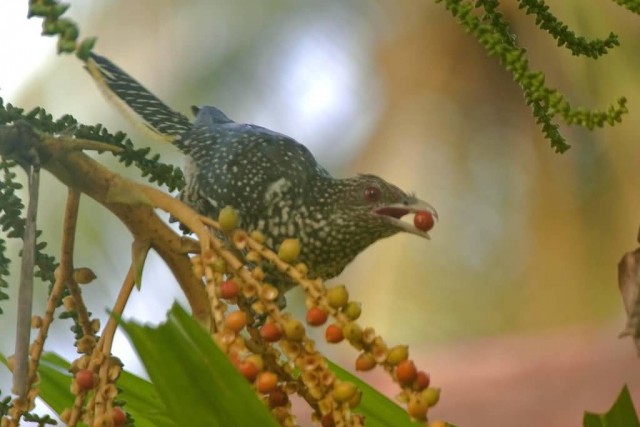 The Asian koel is a member of the cuckoo order of birds the Cuculiformes. It is found in South Asia, China and Southeast Asia. It forms a super species with the closely related black-billed and Pacific koels which are sometimes treated as subspecies. The Asian koel is a brood parasite that lays its eggs in the nests of crows and other hosts who raise its young. 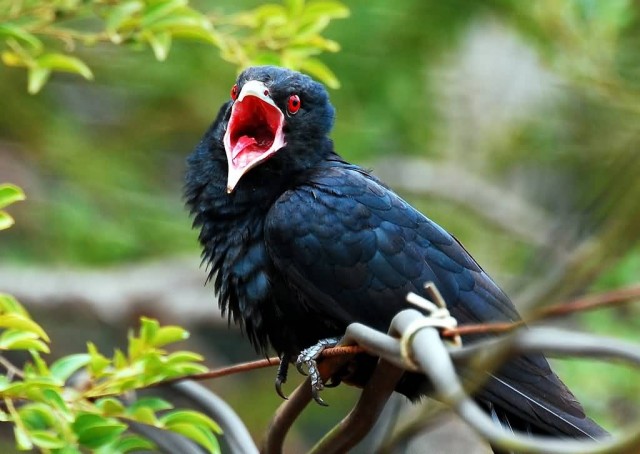 They are unusual among the cuckoos in being largely frugivorous as adults. The name koel is echoic in origin with several language variants. The bird is a widely used symbol in Indian poetry. The Asian koel is a large, long-tailed, cuckoo measuring 39–46 cm and weighing 190–327 g. These birds were once very popular in India as cage birds. Feeding even on boiled rice these hardy birds lived in captivity for as long as 14 years. 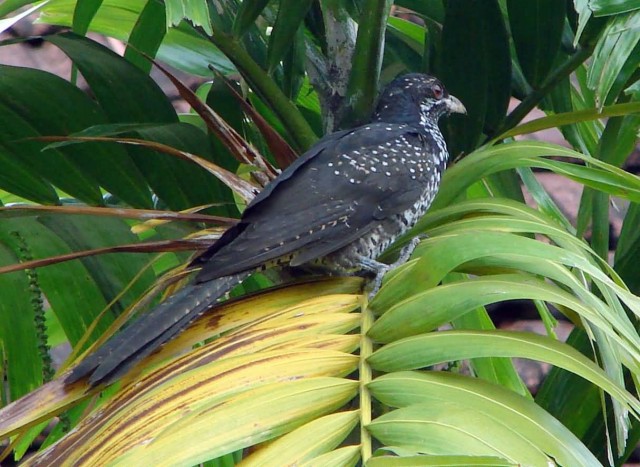 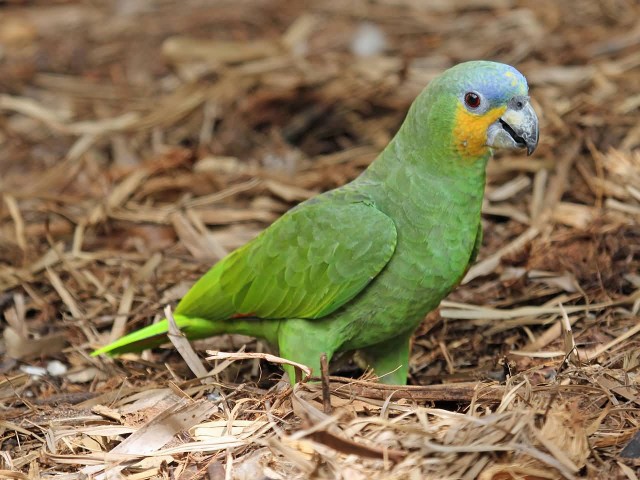 The orange-winged amazon also known locally as orange-winged parrot and loro guaro is a large amazon parrot. It is a resident breeding bird in tropical South America from Colombia, Trinidad and Tobago south to Peru, Bolivia and central Brazil. Its habitat is forest and semi-open country. Although common it is persecuted as an agricultural pest and by capture for the pet trade. It is also hunted as a food source. 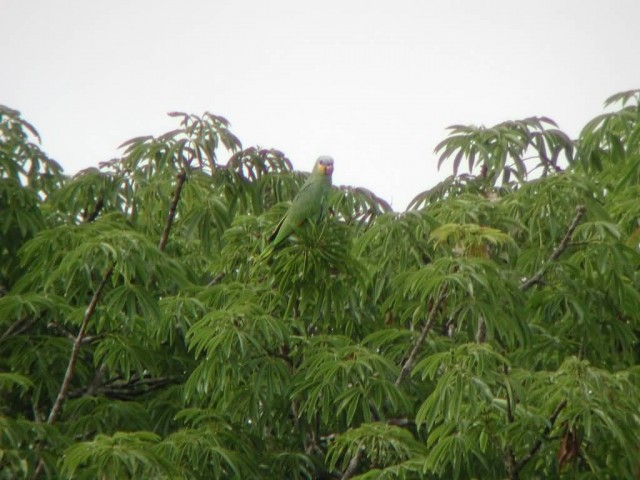 The orange-winged amazon is a mainly green parrot about 33 cm long and weighing about 340 g. It has blue and yellow feathers on its head which varies in extent between individuals. The upper mandible is partly horn colored and partly dark-gray. It has orange feathers in the wings and tail which can be seen when in flight. The male and female are identical in external appearance. The orange-winged amazons are noisy birds and makes loud, high-pitched screams. It eats fruit and seeds including the fruit of palm trees and sometimes cocoa. It roosts communally in palm and other trees and large numbers can be seen at the roost sites at dawn and dusk. 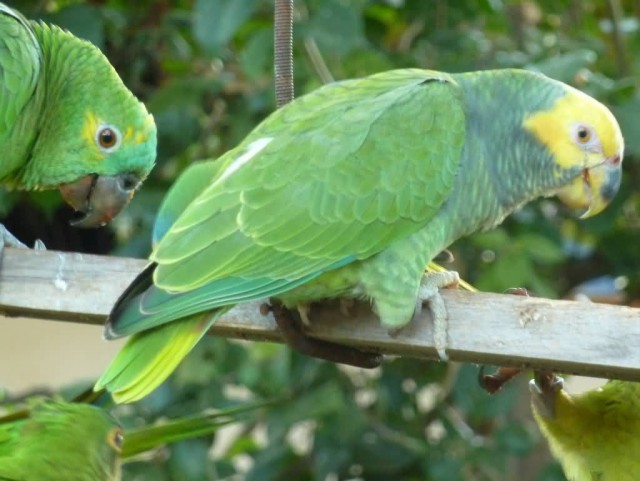