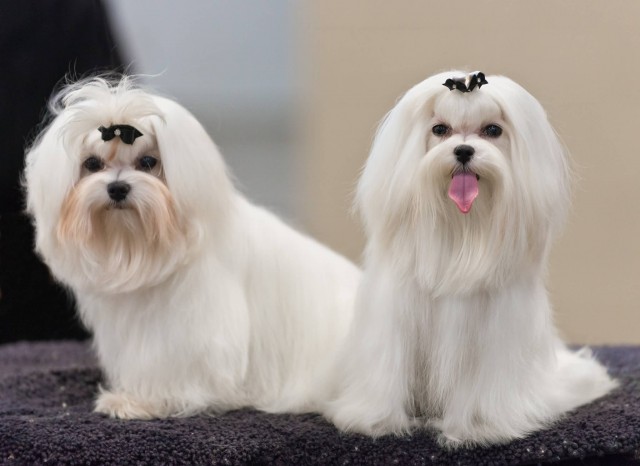 The Maltese is a small breed of dog in the Toy Group. Characteristics include slightly rounded skulls with a finger-wide dome, a black button nose and brown eyes. 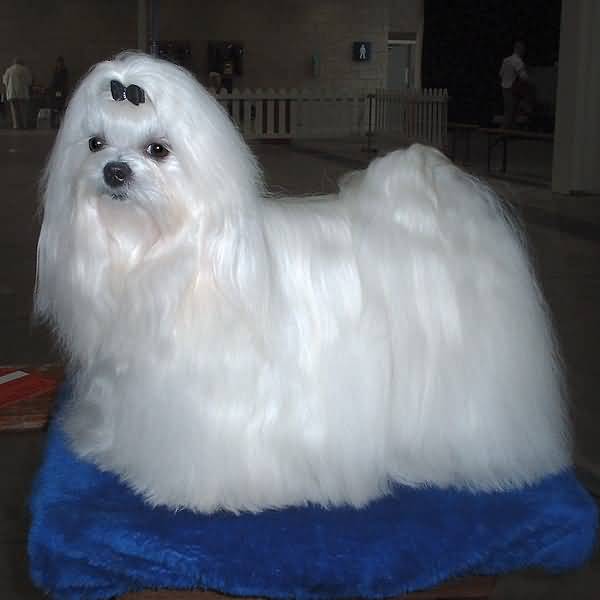 The body is compact with the length equaling the height. The drop ears with long hair and surrounded by darker skin pigmentation, gives Maltese their expressive look. The coat is long and silky and lacks an undercoat. The most common cut for the Maltese is called the puppy cut which involves trimming or shaving the entire body to one short length dult Maltese range from roughly 3 to 10 lb. 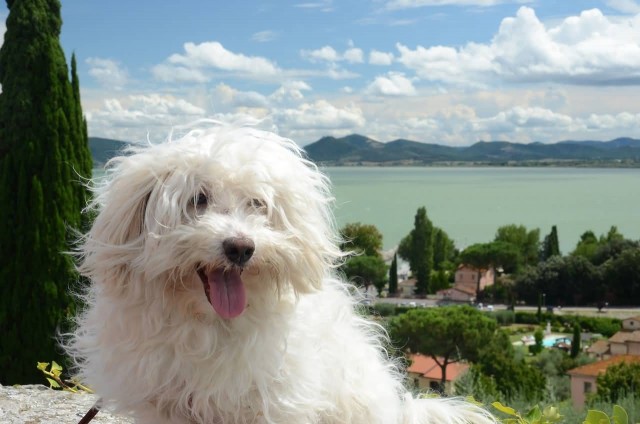 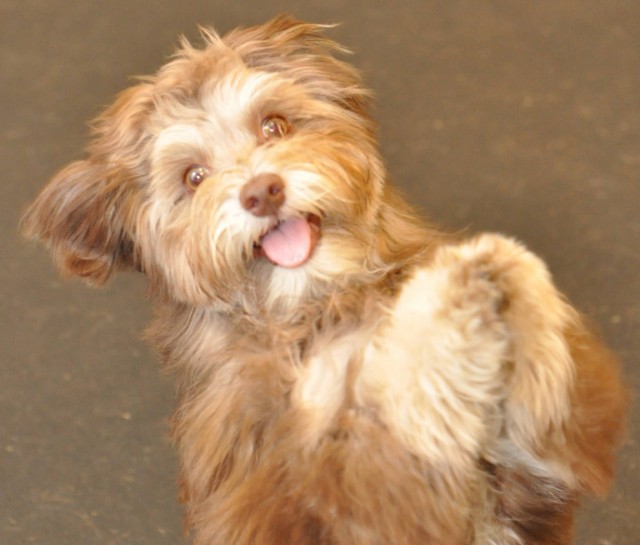 The Havanese a breed of Bichon type is the national dog of Cuba. Sometimes referred to as Havana Silk Dogs. The Havanese is small in size and sturdy in structure with a tail carried over its back and ears that drop and fold. The coat is abundant, long and silky and comes in all colors. 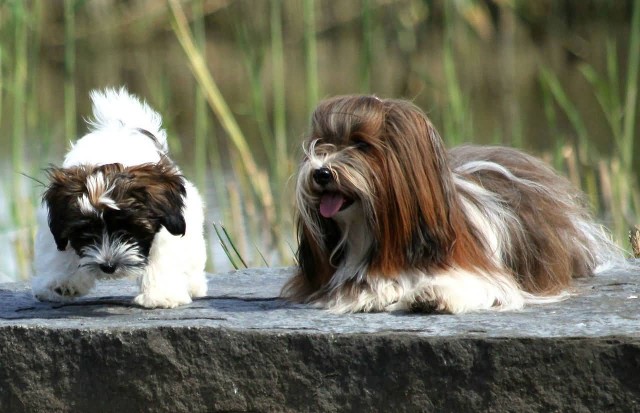 The Havanese is considered an ideal family pet and a true companion dog. They are highly adaptable to almost any environment. Because of their strong social needs. Havanese will not thrive in an environment where they are isolated for several hours each day. Most are 10 to 16 pounds and 8.5 to 11.5 inches with the ideal being 9 to 10.5 inches at the withers. 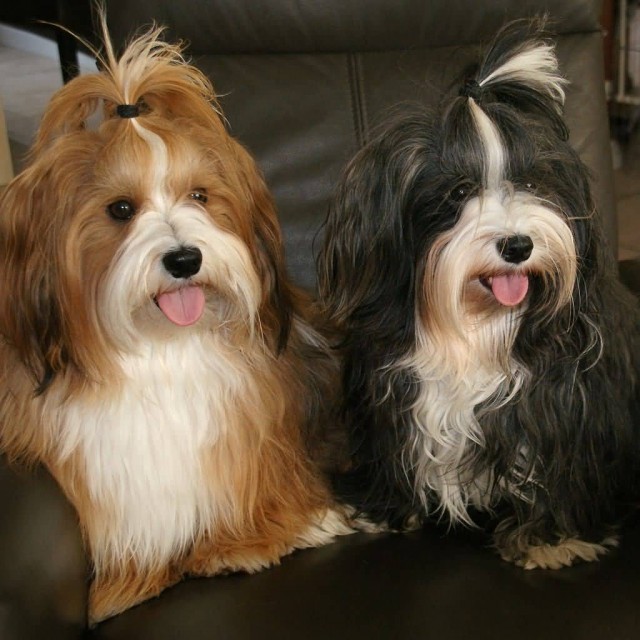 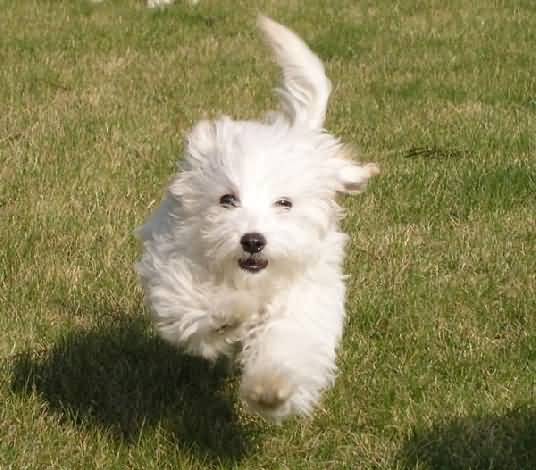 The tail is groomed to be long and curly and is carried over the back. It has a black nose and dark round eyes its white hair consists of a curly dense coat with little shedding although many of the breed do tend to have less curly hair than others. A small amount of buff cream or apricot color may be seen around its ears, snout, paws or body but normally these colors do not exceed 10% of its body. Coat colors are solid white, apricot or grey. 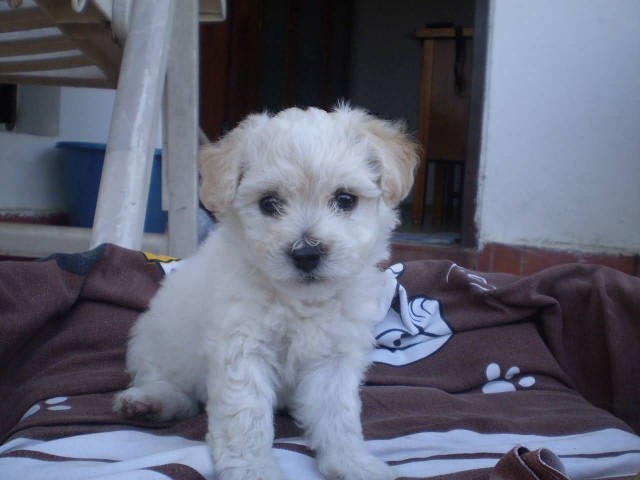 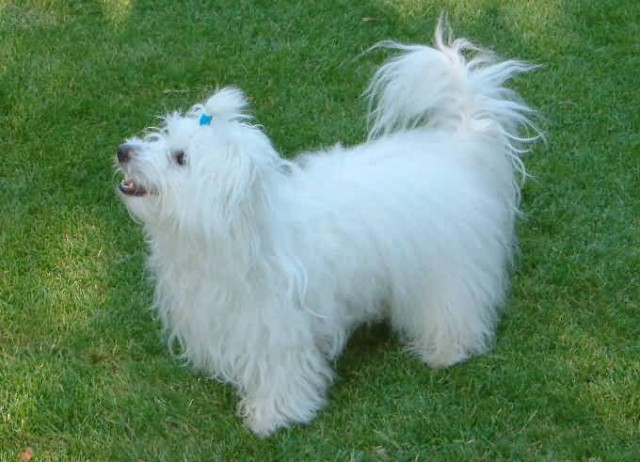 The Coton de Tulear is a breed of small dog named for the city of Tulear in Madagascar and for its cotton-like coat. Multiple registries with differing standards describe the Coton de Tulear but it generally has very soft hair comparable to a cotton ball, a prominent black nose, large expressive eyes, and somewhat short legs. The Coton de Tulear’s tail should curl over its back like some other dog breeds. 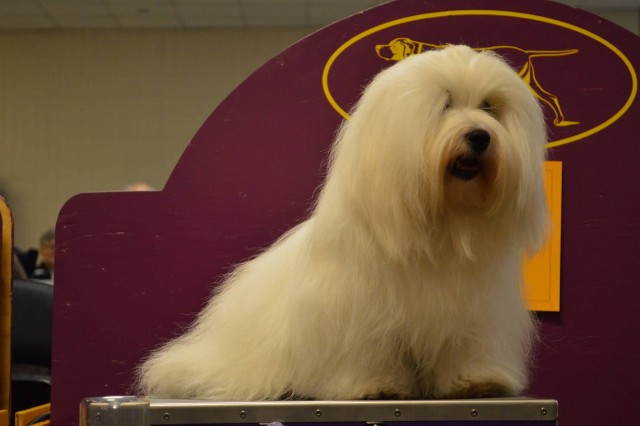 The Coton de Tulear has a medium-to-long, fluffy, cotton-like coat that is considered hair rather than fur. The Fédération Cynologique Internationale standard gives the Coton’s weight as 4 to 6 kg for males and 3.5 to 5 kg for females. The Coton’s height is 25 to 30 cm tall for males and 22 to 27 cm for females. 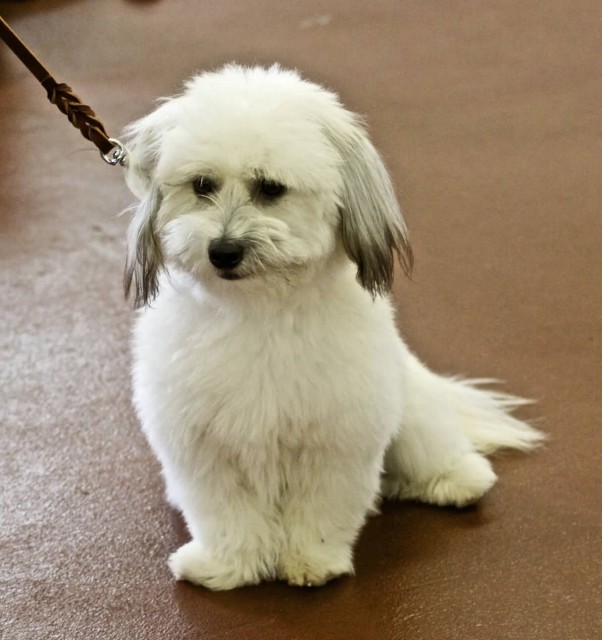 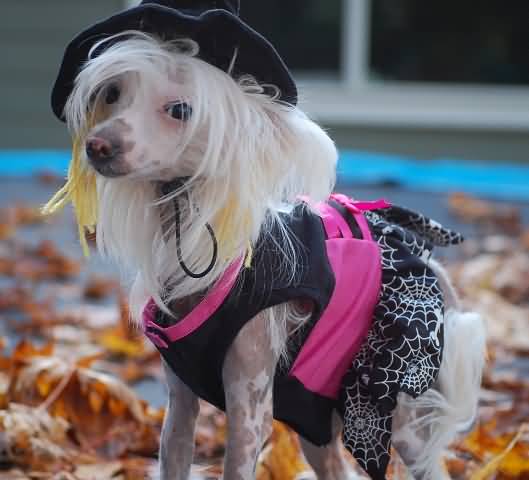 The Chinese crested dog is a hairless breed of dog. Like most hairless dog breeds the Chinese crested comes in two varieties with and without fur which are born in the same litter the Powder Puff and the Hairless. This breed is considered small 10–13 lb. 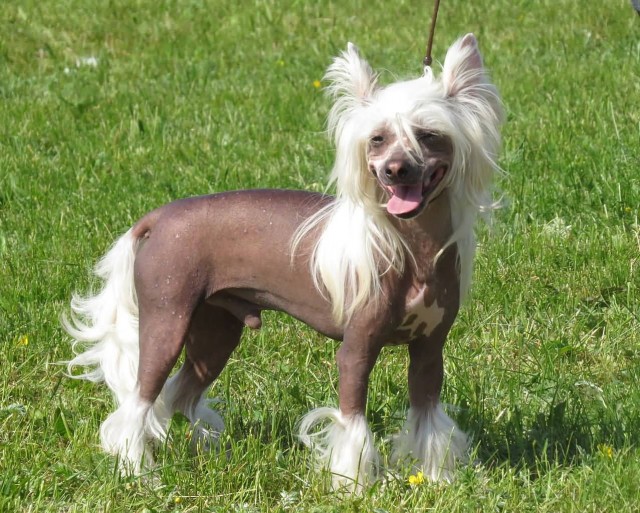 The Hairless and Powderpuff varieties of Chinese crested Dogs appear to be two different breeds but hairlessness is an incomplete dominant trait within a single breed. The Hairless has soft, human like skin, as well as tufts of fur on its paws and tail and long flowing hair on its head.The Powderpuff is not affected by many of the congenital diseases found in other toy breeds. 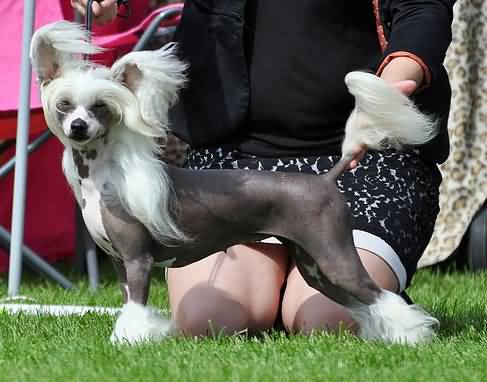 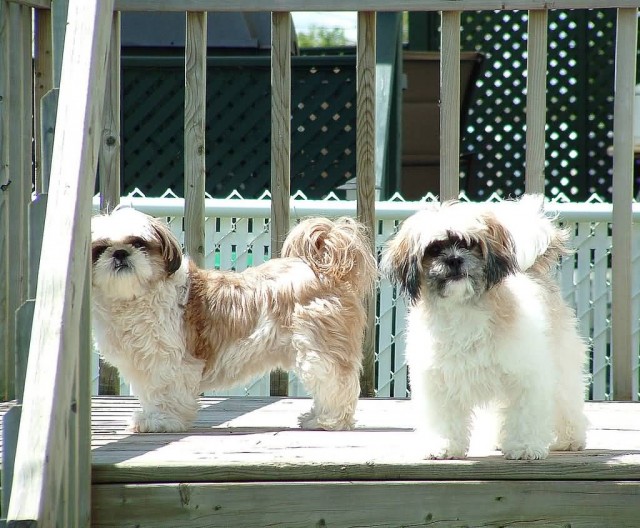 The Lhasa Apso is a non-sporting dog breed originating in Tibet. Male Lhasa Apso’s should ideally be 10.75 inches at the withers and weigh about 14 to 18 pounds. The females are slightly smaller and weigh between 12 to 14 pounds. The breed standard requires dark brown eyes and a black nose although liver-colored lhasa’s have a brown nose. The texture of the coat is heavy, straight, hard, neither woolly nor silky and very dense. They come in a wide variety of colors including black, white, red and gold with various shadings. Lhasas can be with or without dark tips at the ends of ears and beard. The tail should be carried well over the dog’s back. 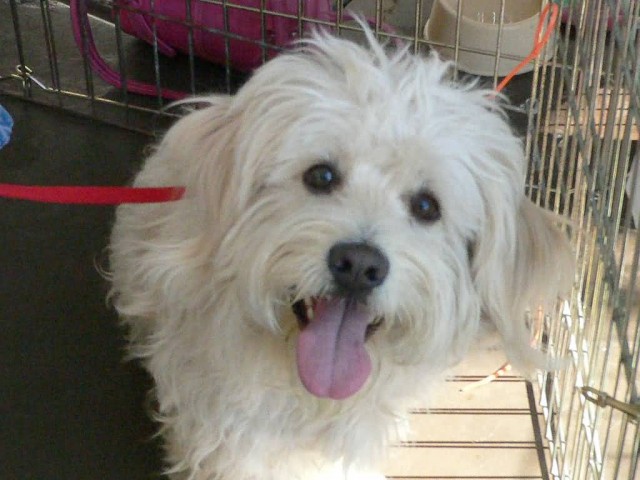 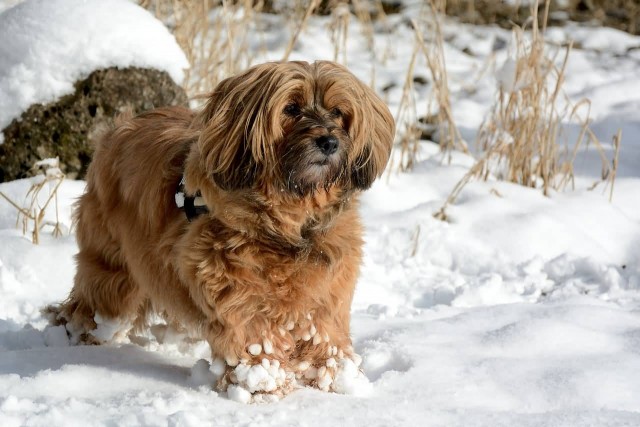 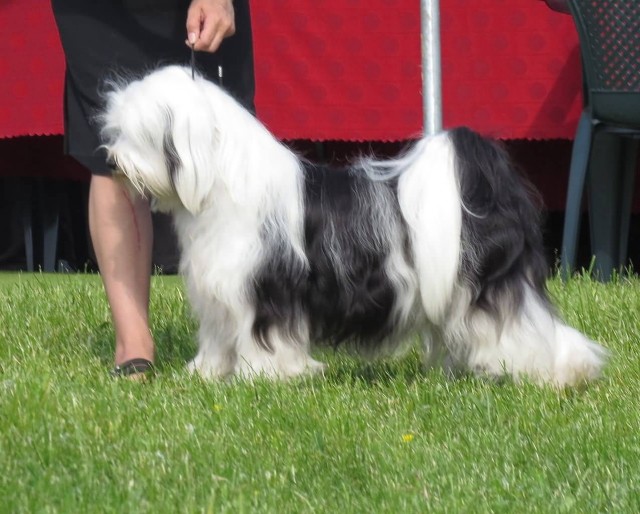 They vary widely in height and weight ranging from 14-16 in and is 18-30 lb with 20-24 lb preferred for either sex. All weights are acceptable if in proportion to the size. The head is moderate with a strong muzzle of medium length and a skull neither rounded nor flat. The eyes are large, dark and set fairly far apart. The V-shaped drop ears are well feathered and should be set high on the sides of the skull. Although the preferred colour for the nose is black in show dogs they are also sometimes brown. The body is well muscled and compact. The length of the back should be equal to the height at the withers giving the breed its typical square look. The tail is set high well feathered and carried in a curl over the back. One of the more unusual features of the Tibetan Terrier is the broad flat feet with hair between the toes. They are ideal for climbing mountains and act as natural snow shoes. The hair of Tibetans has a long growth cycle. As a result their coat grows quite long and pet animals will require occasional trimming. Tibetan Terriers are available in any combination of solid, parti – color, tricolor, brindle or piebald as long as the nose leather is black and the eyes and eye rims are dark. 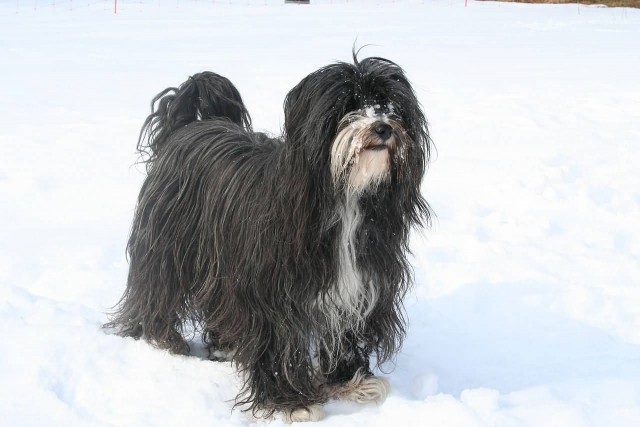 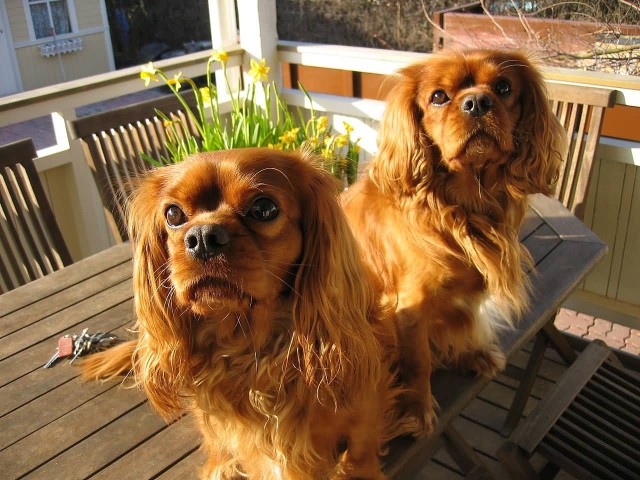 The Cavalier King Charles Spaniel is a small spaniel classed as a toy dog by The Kennel Club and the American Kennel Club. The Cavalier King Charles Spaniel is one of the largest toy breeds. It is small for a spaniel with fully grown adults comparable in size to adolescents of other larger spaniel breeds. Breed standards state that height of a Cavalier should be between 12 to 13 inches with a proportionate weight between 10 to 18 pounds. The tail is usually not docked and the Cavalier should have a silky coat of moderate length. 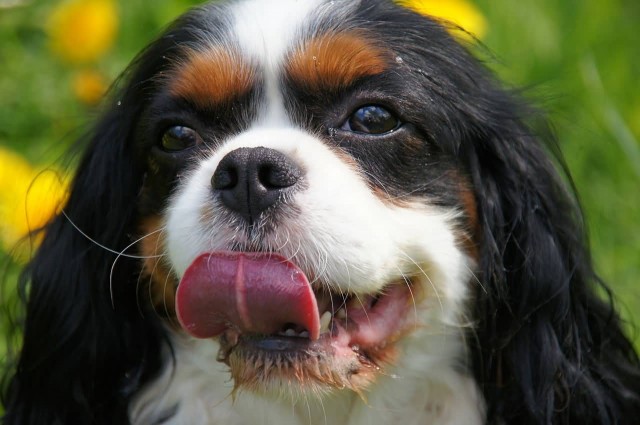 There are several major differences between the two breeds with the primary difference being the size. While the Cavalier weighs on average between 10 to 18 pounds, the King Charles is smaller at 9 to 12 pounds. In addition their facial features while similar are different the Cavalier’s ears are set higher and its skull is flat while the King Charles’s is domed. Finally the muzzle length of the Cavalier tends to be longer than that of its King Charles cousin. The breed has four recognized colours. 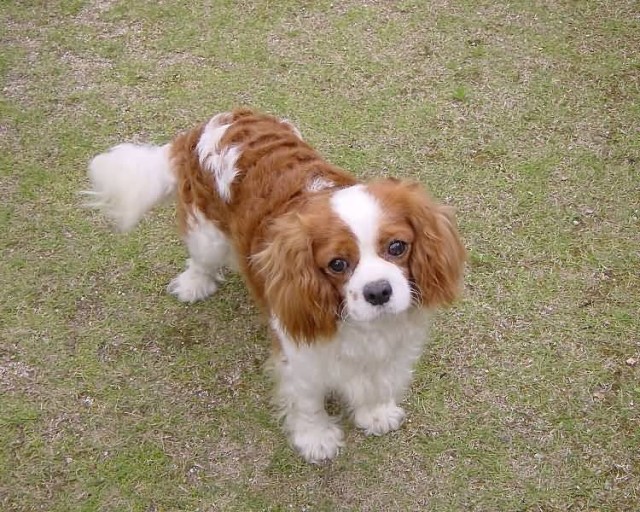 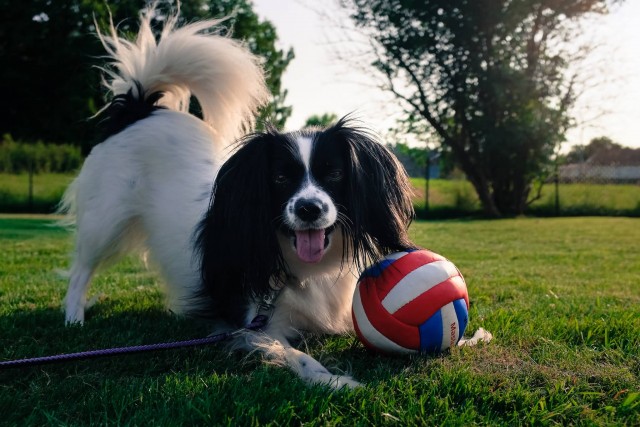 The Phalene is a toy dog breed also known as the Continental Toy Spaniel. Phalene is the drop-eared variety of the Papillon dog. Both varieties can occur in the same litter. The Phalene is an intelligent dog. They learn new tricks easily. They are sociable with the family but reserved around new people. They need to be socialized to get along well with other pets or they can be distrustful and exhibit aggressive tendencies toward other dogs and people.

Phalenes are playful and affectionate. They are lap dogs and companion dogs. They have enough energy to keep up with active families but can also be calm enough to live in an apartment. Due to their rather high energy level they demand regular exercise routine as other companion breeds. Papillon’s are known as good watchdogs and they will alert their owner to changes in their environment. They can be noisy like many other toy dogs. The Papillon can withstand heat but is more sensitive to cold temperatures because of their single-coated fur and should not be left outside unattended in cold weather. 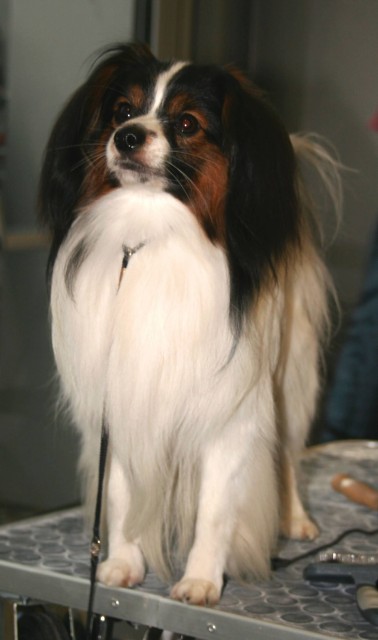 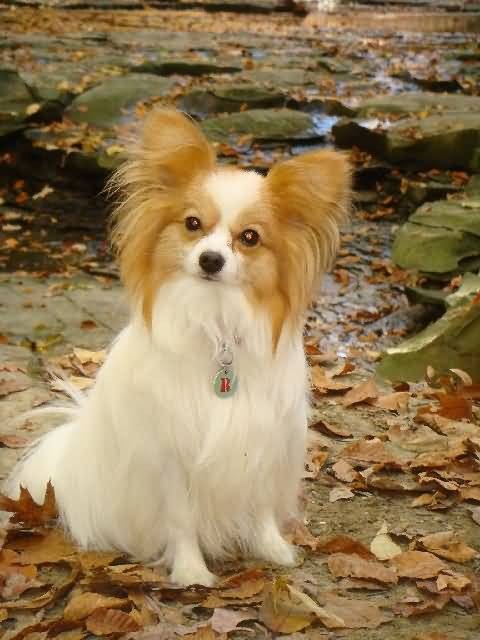 The Papillon also called the Continental Toy Spaniel is a breed of dog of the Spaniel type. One of the oldest of the toy spaniels it derives its name from its characteristic butterfly like look of the long and fringed hair on the ears. 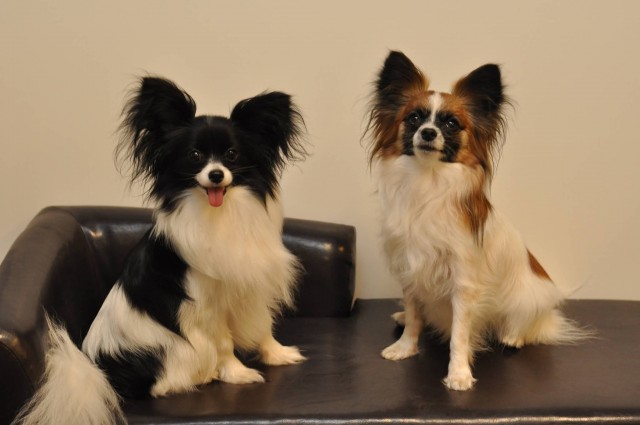 A Papillon with dropped ears is called a Phalene. The small head is slightly rounded between the ears with a well defined stop. The muzzle is somewhat short thin tapering to the nose. The dark medium-sized round eyes have thin black rims often extending at the junction of the eyelids towards the ears. The large ears can either be erect or dropped with rounded tips. The teeth meet in a scissors bite. The long tail is set high carried over the body and covered with long fine hair. Dewclaws are sometimes removed. The straight, long, fine, single coat has extra frill on the chest, ears, back of the legs and the tail. Coat color is white with patches of any color. A mask of a color other than white covers both ears and eyes from back to front. 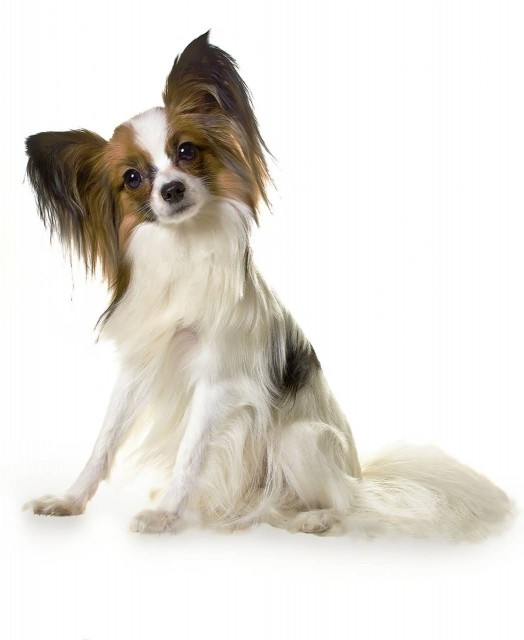 Papillon’s can live up to 17 years. A 2002 Papillon Club of America survey puts the average age of their members deceased Papillon’s at 11.45 years. 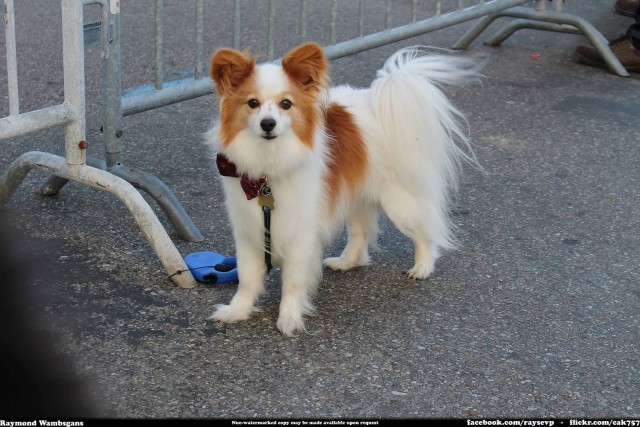