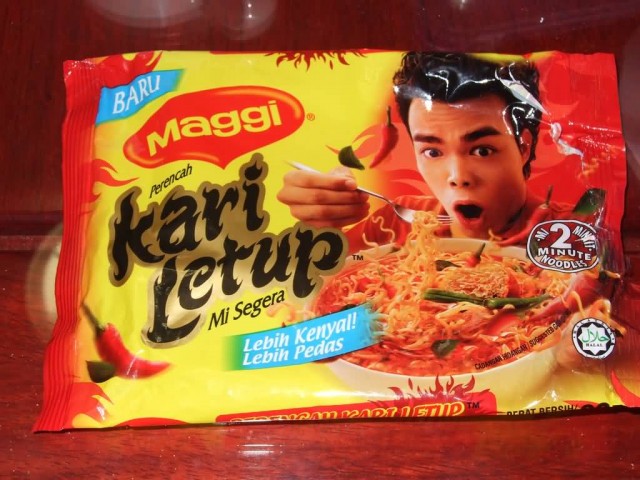 Maggi is an international brand of seasonings, instant soups and noodles owned by Nestle since 1947. The original company came into existence in 1875 in Switzerland, when Julius Maggi took over his father’s mill. He quickly became a pioneer of industrial food production, aiming to improve the nutritional intake of worker families. Maggi was the first to bring protein-rich legume meal to the market, and followed up with a ready-made soup based on legume meal in 1886.

In 1897, Julius Maggi founded the company Maggi GmbH in the German town of Singen, where it is still based today. In 1947, following several changes in ownership and corporate structure, Maggi’s holding company merged with the Nestlé company to form Nestle-Alimentana S.A., currently known in its francophone home base as Nestlé S.A. On June 5, 2015, Food Safety and Standards Authority of India ordered a recall of all nine approved variants of Maggi instant noodles from India, terming them “unsafe and hazardous” for human consumption. On the same day, Food Safety Agency of United Kingdom launched an investigation to find levels of lead in Maggi noodles.

On June 6, 2015 the Central Government of India banned nationwide sale of Maggi noodles for an indefinite period. Nepal indefinitely banned Maggi over concerns about lead levels in the product. Maggi noodles has been withdrawn in five African nations- Kenya, Uganda, Tanzania, Rwanda and South Sudan by a super-market chain after a complaint by the Consumer Federation of Kenya. It was revealed later that the United States Food and Drug Administration had refused import of the noodles in January 2015 on grounds similar to the reasons for ban in India. 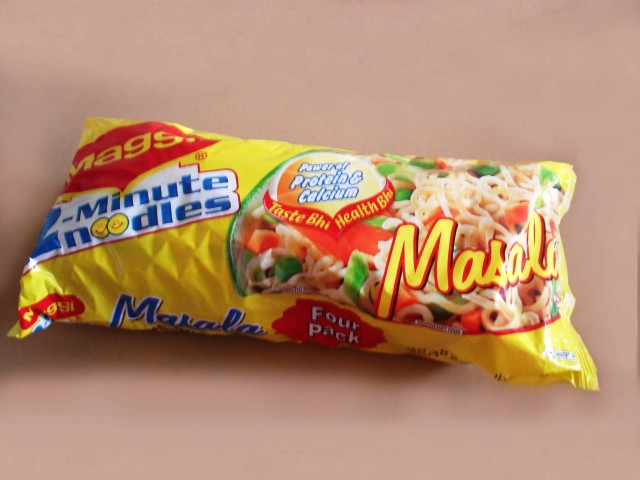 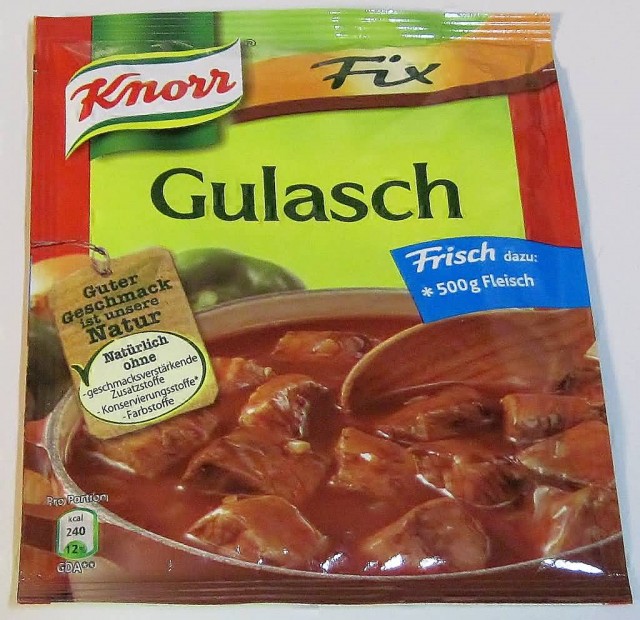 Knorr is a German food and beverage brand owned by the English-Dutch company Unilever since 2000, when Unilever acquired Best Foods, except in Japan where it is made under license by Ajinomoto. It produces dehydrated soup mixes and condiments. It was known as Royco in Indonesia, and as Continental in Australia. Knorr was founded in 1838 by Carl Heinrich Theodor Knorr.

Knorr headquarters is in Heilbronn, Germany. Products previously sold under the Lipton brand are now being absorbed into the Knorr product line. With annual sales topping €3 billion, Knorr is Unilever’s biggest-selling brand. In cooperation with Slim fast, also owned by Unilever, Knorr markets a line of low-calorie products. An Israeli company based in Haifa, Israel Edible Products, produces kosher soups for Knorr that are sold in Israel and the United States. Knorr is available around the world. 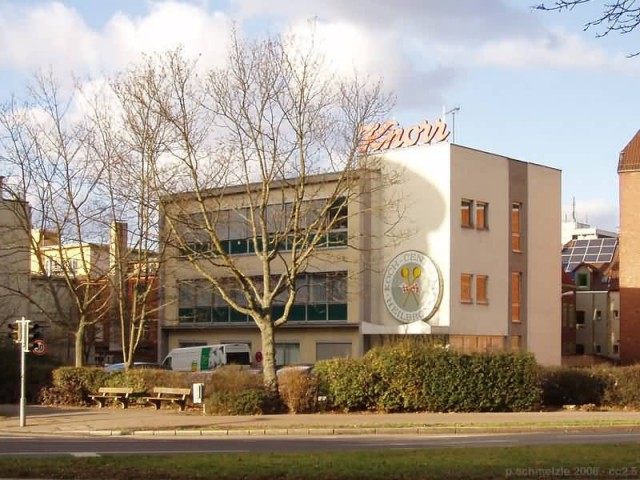 In 1957, flagship Knorr brands like bouillon and soups were sold in 8 countries and by 2000, Knorr products were sold in nearly 90 countries around the globe. Throughout the 20th century, Knorr launched many recipes throughout the world – Knorr Soupy Noodles in India, Instant noodle in Pakistan, Knorr Home style Stock in Canada and the US, and Knorr soups across Europe and the rest of the world. 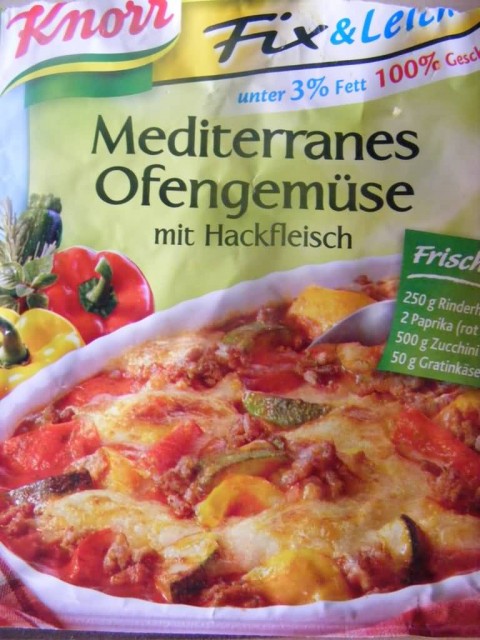 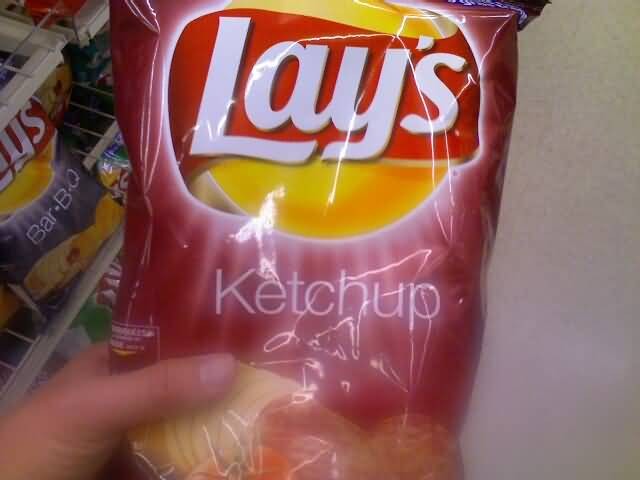 Lay’s is the brand name for a number of potato chip varieties as well as the name of the company that founded the chip brand in 1932. Lay’s has been owned by PepsiCo since 1965. Other brands in the Frito-Lay group include Fritos, Doritos, Ruffles, Cheetos, Rold Gold pretzels, Munchos, Funyuns, and Sun Chips. As with most snack foods, the Lay’s brands contain very few vitamins and minerals in any variety. 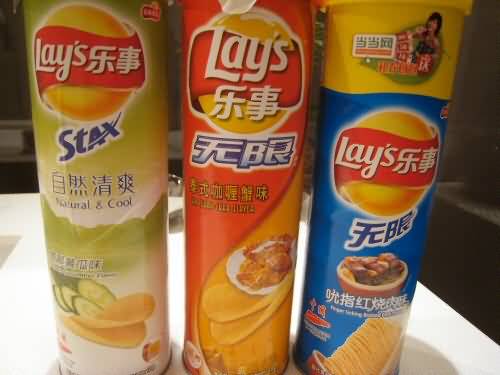 At ten percent of the daily requirement per serving, vitamin C is the highest. Salt content is particularly high, with a serving containing as much as 380 mg of sodium. Baked Lays are produced in cheddar, barbecue, sour cream and onion, and original flavors. Some Frito-Lay brand seasoned products manufactured for the U.S. market may contain rennet or pork enzymes that are added in cheese production. 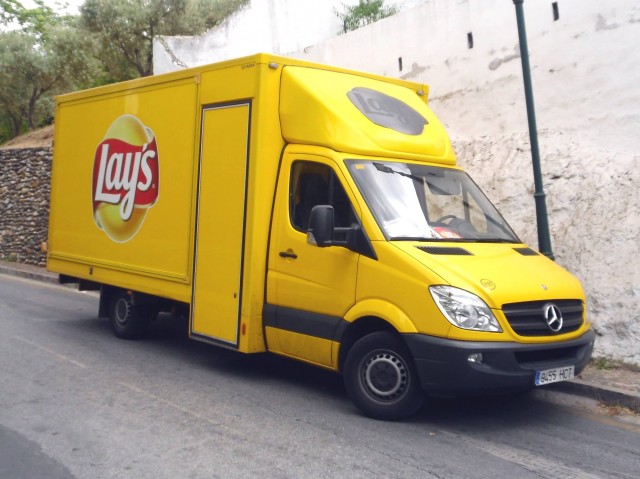 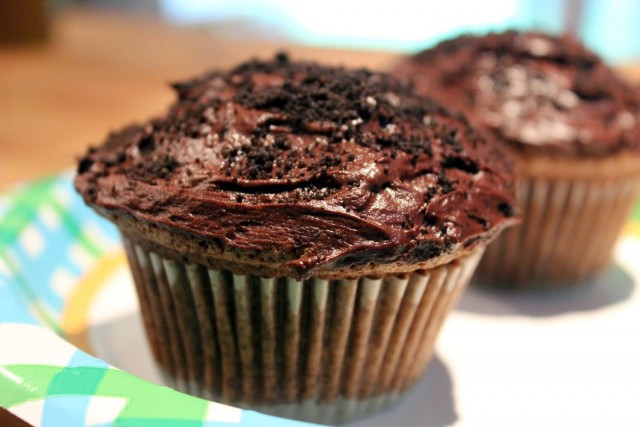 Oreo is a sandwich cookie consisting of two chocolate wafers with a sweet creme filling in between, and are marketed as “Chocolate Sandwich Cookies” on the package they are held in. The version currently sold in the United States is made by the Nabisco division of Mondelēz International. Oreo has become the best selling cookie in the United States since its introduction in 1912. 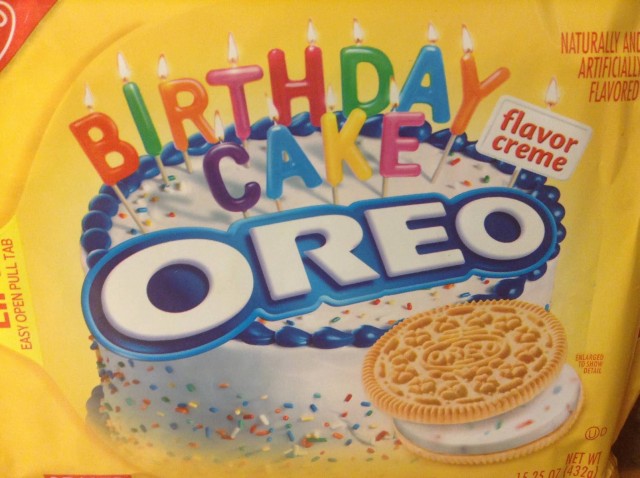 The origin of the name Oreo is unknown, but there are many theories, including derivations from the French word ‘Or’, meaning gold, or the Greek word ‘Oreo’, meaning beautiful, nice or well done. Others believe that the cookie was named Oreo because it was short and easy to pronounce. The term “Oreo” has been used to refer to a black person who acts in a “white manner”, or who perpetuates the “un-level playing field for blacks” – someone who is, like the cookie, “black on the outside and white on the inside”. 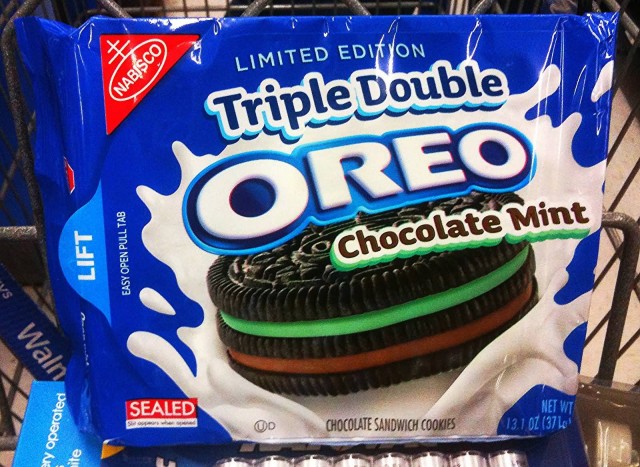 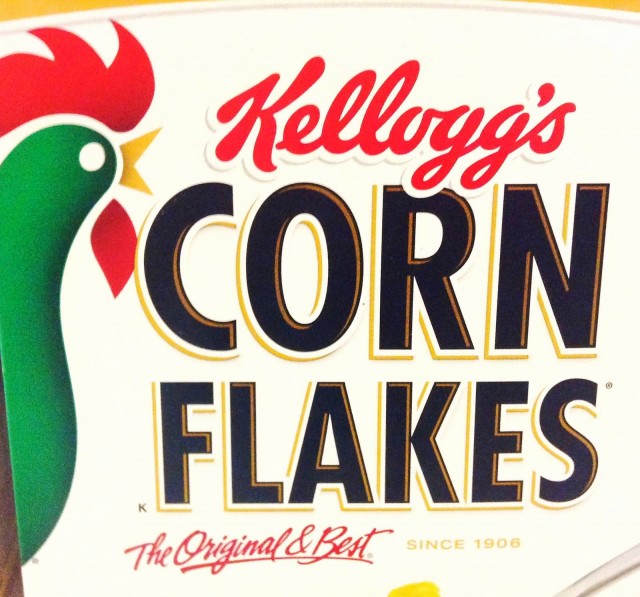 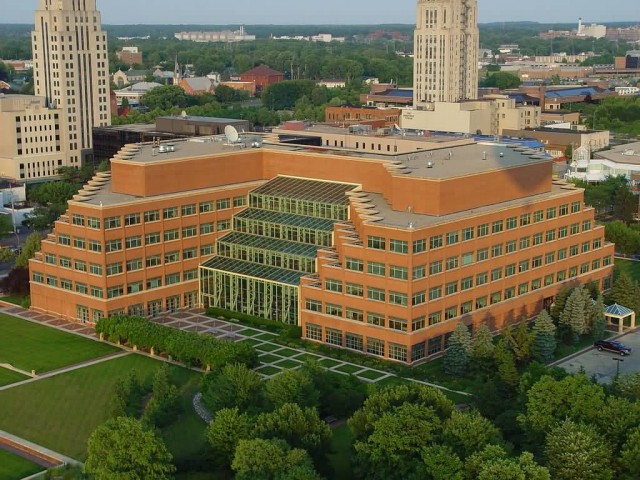 Kellogg’s stated purpose is “Nourishing families so they can flourish and thrive. “Kellogg’s products are manufactured in 18 countries and marketed in over 180 countries. Kellogg’s largest factory is at Trafford Park in Manchester, United Kingdom, which is also the location of its European headquarters. Kellogg’s holds a Royal Warrant from Queen Elizabeth II and the Prince of Wales. In 2012, Kellogg’s became the world’s second-largest snack food company by acquiring the Pringles potato crisps brand from Procter & Gamble for $2.7 billion in a cash deal. 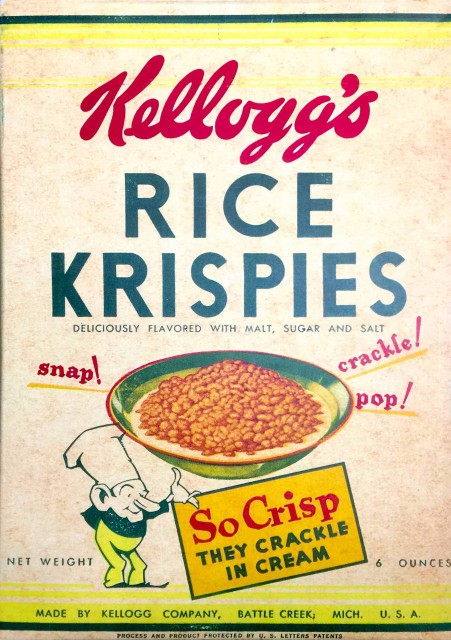 Ajinomoto Co., Inc. is a Japanese food and chemical corporation which produces seasonings, cooking oils, TV dinners, sweeteners, amino acids, and pharmaceuticals. In particular it is the world’s largest producer of aspartame, with a 40% global market share. The literal translation of Aji no Moto is “Essence of Taste,” used as a trademark for the company’s original monosodium glutamate product. Its head office is located in Chūō, Tokyo. Ajinomoto operates in 26 countries, employing around 27,518 people as of 2013. Its yearly revenue in the fiscal year of 2013 stands at around US$12 billion.

Ajinomoto’s main product, monosodium glutamate seasoning, was first marketed in Japan in 1909, having been discovered and patented by Kikunae Ikeda. He found that the most important compound within seaweed broth for common use was actually a glutamate salt, which he identified with the taste umami, a word meaning ‘pleasant taste’ or ‘savoriness’. As the simplest such salt for human consumption, the popularity of MSG helped the company rapidly expand to other countries, with Ajinomoto U.S.A., Inc. established in 1956. 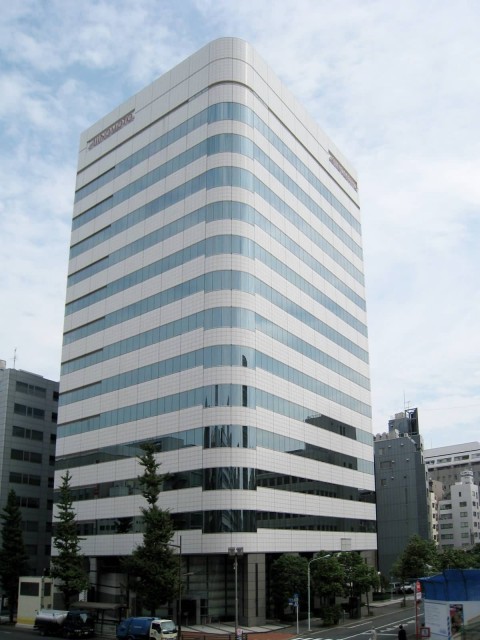 Before the eventual publicity, the conglomerate was founded on Ikeda’s work: it was the first to suggest that industrially purified glutamic acid salts, residues or analogues, originally found in seaweed or dried fish-based broth, might have a characteristic taste of its own. That idea was rapidly connected to the much older Japanese, culinary term of umami. This led to early adoption of MSG as a culinary agent in Japan. Ajinomoto is the world’s largest manufacturer of aspartame, sold under the trade name Amino sweet. It acquired its aspartame business in 2000 from Monsanto for US$67 million. Ajinomoto supplies the amino acid L-Glutamine. 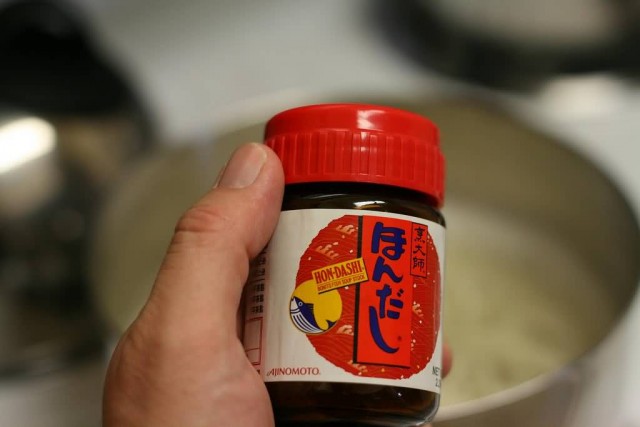 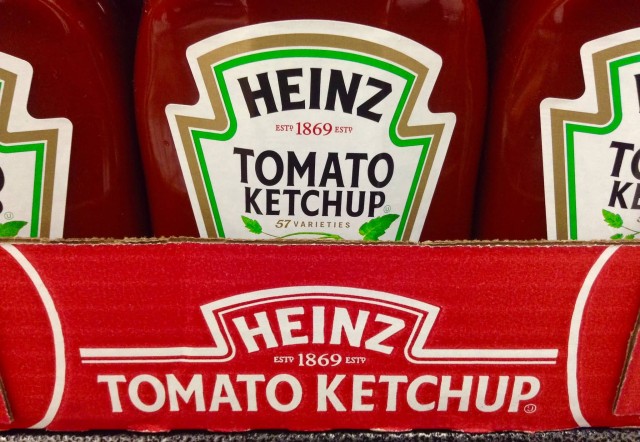 The H. J. Heinz Company, or Heinz, is an American food processing company with world headquarters in Pittsburgh, Pennsylvania. It was founded by Henry Heinz in 1869. The H. J. Heinz Company manufactures thousands of food products in plants on six continents, and markets these products in more than 200 countries and territories. The company claims to have 150 number-one or number two-brands worldwide. Heinz ranked first in ketchup in the US with a market share in excess of 50%; Ore-Ida label held 46% of the frozen-potato sector in 2003. 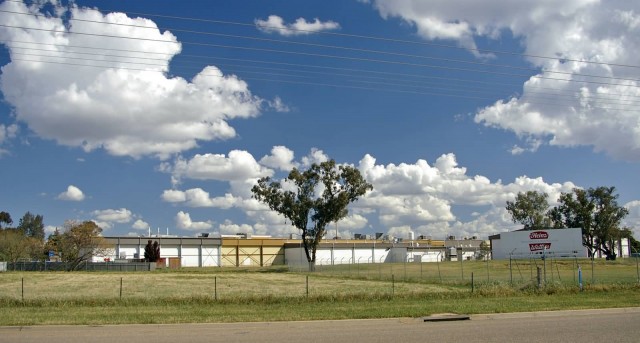 Since 1896, the company has used its “57 Varieties” slogan; it was inspired by a sign advertising 21 styles of shoes, and Henry Heinz chose the number 57 even though the company manufactured more than 60 products at the time. On February 14, 2013, Heinz agreed to be purchased by Berkshire Hathaway and 3G Capital for $23 Billion. On March 25, 2015, Kraft announced its merger with Heinz, arranged by Berkshire Hathaway and 3G Capital. If the merger proceeds, the resulting Kraft Heinz Company is expected to be the fifth largest food company in the world. 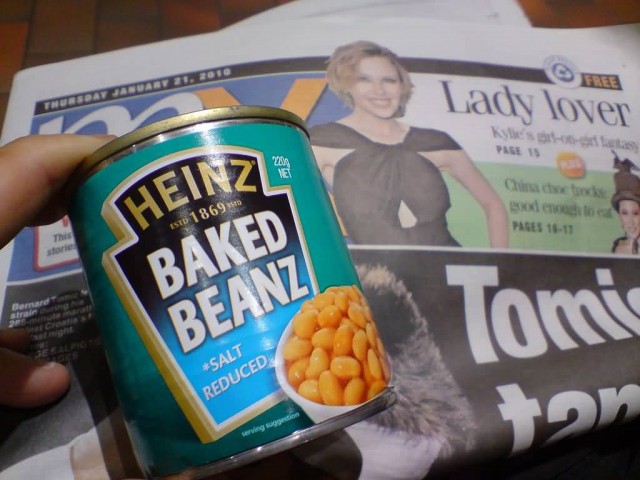 Yoplait is an internationally franchised brand of yogurt jointly owned by United States–based food conglomerate General Mills and French dairy cooperative Sodiaal. In the U.S., Yoplait participates in an annual program called “Save Lids to Save Lives” to raise money for breast cancer research. Yoplait donates ten cents per pink foil lid that is mailed to the company, but they state in fine print on all promotional materials that their donations will be capped at $2,000,000 per year.

This money is donated to the Susan G. Komen Breast Cancer Foundation. Yoplait has been the primary sponsor of Race for the Cure, a marathon held to raise additional research money, since 2001. The American franchise of Yoplait added a rim on the bottom of the yogurt containers to keep animals such as skunks from accidentally getting their heads caught. A label was added to the container stating: “Protect Wildlife: Crush Cup Before Disposal.” 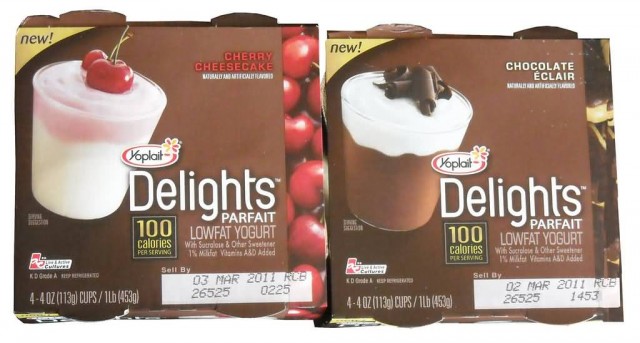 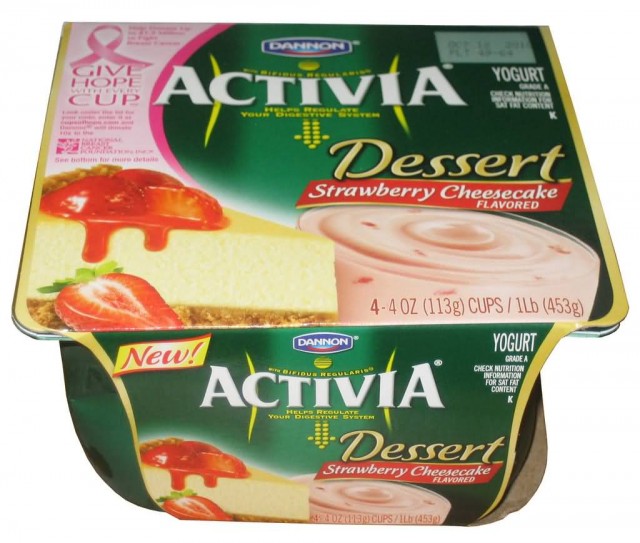 Activia is a brand of a sour milk product, often wrongly described as yogurt, owned by Groupe Danone and introduced in France in 1987. As of 2013, Activia is present in more than 70 countries and on all 5 continents. Activia is classified as a functional food, designed to improve digestive health. 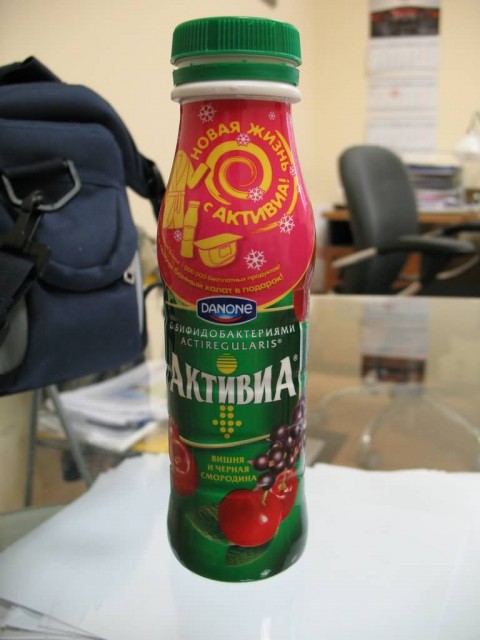 In 2011, in Germany, Danone moved from polystyrene to PLA Ingeo, a new material for its Activia yogurt cup. This packaging is made of plastic from plants, not oil. To develop this innovative material, the French manufacturer worked closely with NatureWorks. Danone and NatureWorks also want to achieve the International Sustainability and Carbon Certification designation for this new Activia packaging. This packaging change has been implemented for about 80% of the volume of all Activia products in the German market. The aim of this switch is to reduce the packaging carbon footprint by 25% and to use 43% less fossil resources. 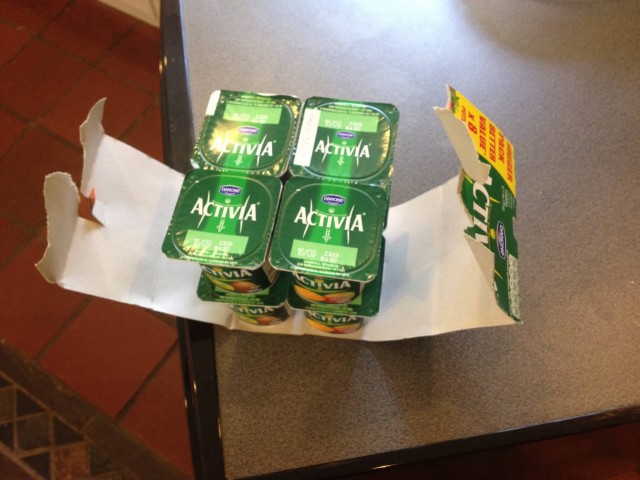 Cheetos is a brand of cheese-flavored, puffed cornmeal snacks made by Frito-Lay, a subsidiary of PepsiCo. Fritos creator Charles Elmer Doolin invented Cheetos in 1948, and began national distribution in the U.S. The initial success of Cheetos was a contributing factor to the merger between The Frito Company and H.W. Lay & Company in 1961 to form Frito-Lay. In 1965 Frito-Lay became a subsidiary of The Pepsi-Cola Company, forming PepsiCo, the current owner of the Cheetos brand. 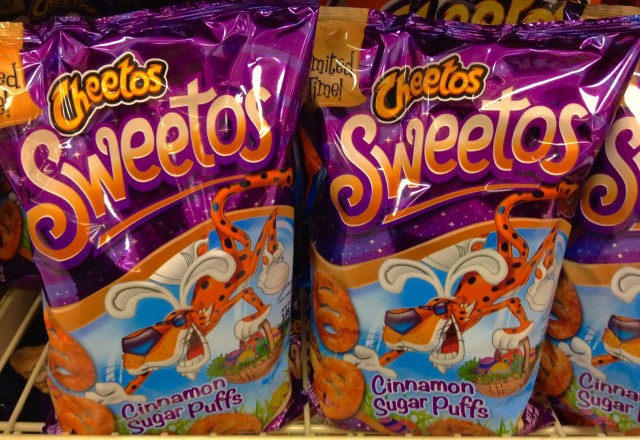 In 2010, Cheetos was ranked as the top selling brand of cheese puffs in its primary market of the United States; worldwide the annual retail sales totaled approximately $4 billion. The original Crunchy Cheetos are still in production but the product line has since expanded to include 21 different types of Cheetos in North America alone. As Cheetos are sold in more than 36 countries, the flavor and composition is often varied to match regional taste and cultural preferences—such as Savory American Cream in China, and Strawberry Cheetos in Japan. 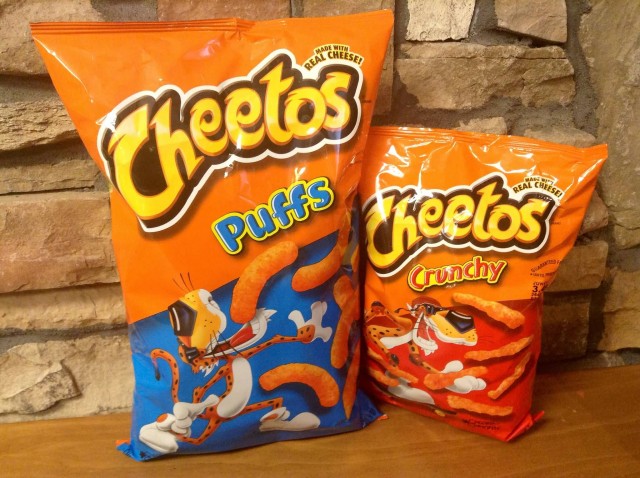