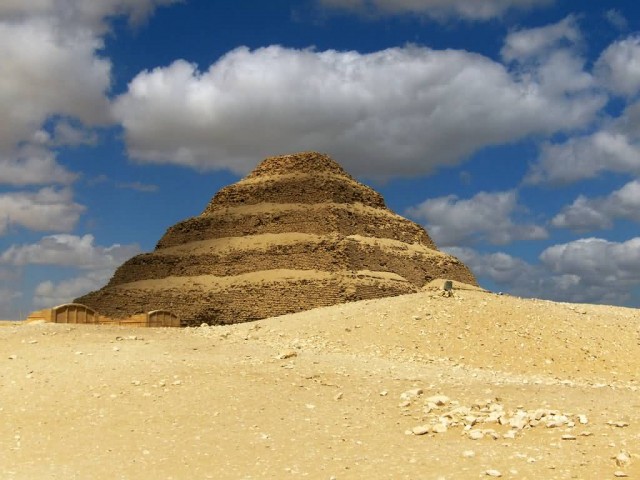 It was built during the 27th century BC for the burial of Pharaoh Djoser by Imhotep, his vizier. It is the central feature of a vast mortuary complex in an enormous courtyard surrounded by ceremonial structures and decoration. The step pyramid is made of limestone. It is massive and contains only one tight corridor leading to the close midst of the monument, ending in a rough chamber where the entrance to the tomb shaft was hidden. This inner construction was later filled with rubble, for it was of no use anymore. 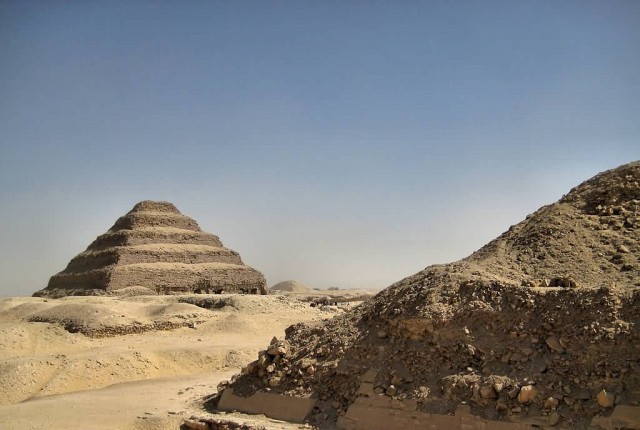 The pyramid was once 62 metres high and had a base measurement of ca. 125 X 109 metres. It was tightly covered infinely polished, white limestone. Beneath the step pyramid, a large maze of corridors and chambers were dug. The burial chamber lies in the midst of the subterranean complex, a 28 metres deep shaft leads directly from the surface down to the burial. The main excavator of the Step Pyramid was Jean-Phillipe Lauer, a French architect who reconstructed key portions of the complex. The complex covers 15ha and is about 2.5 times as large as the Old Kingdom town of Heirakonpolis. 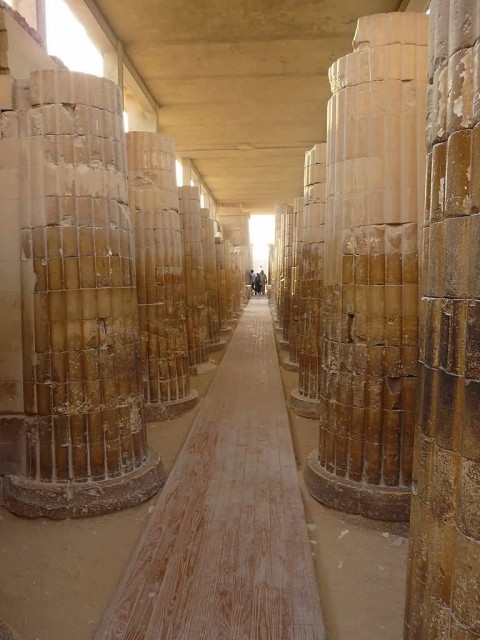 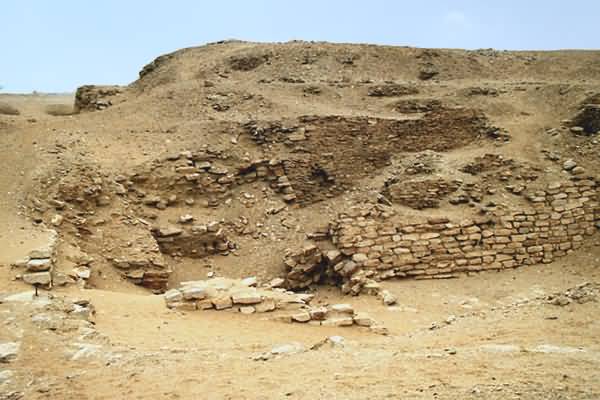 The Buried Pyramid also called the Pyramid of Sekhemkhet  is an unfinished step pyramid constructed ca. 2645 BC for Sekhemkhet Djoserty. This pharaoh was the second of the Third Dynasty of Ancient Egypt. Sekhemkhet’s pyramid complex was built southwest of Djoser’s at Saqqara and it includes a pyramid, a subterranean structure and a necropolis complex. The pyramid was to be stepped right from its inception. With a base 115 metres  in length, it suggests that, if it had been completed, the superstructure would be taller than its neighbour, with seven steps and rising to 70 metres . As the pyramid was unfinished, it never received its limestone casing, but the construction technique can be still be made out: the limestone blocks are inclined inwards by 15°, with sloping courses of stone laid at right angles to the incline. 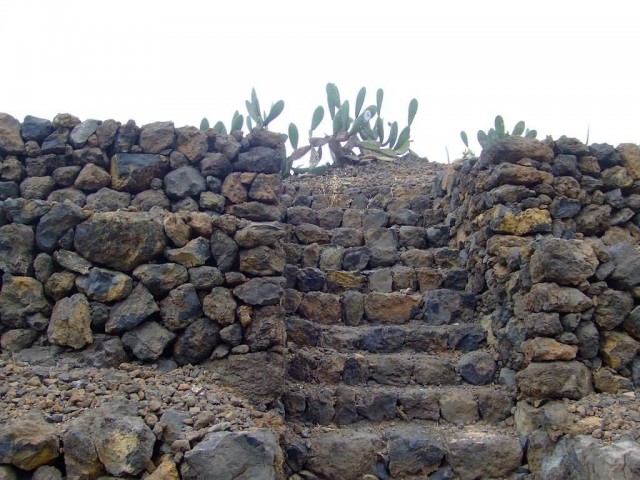 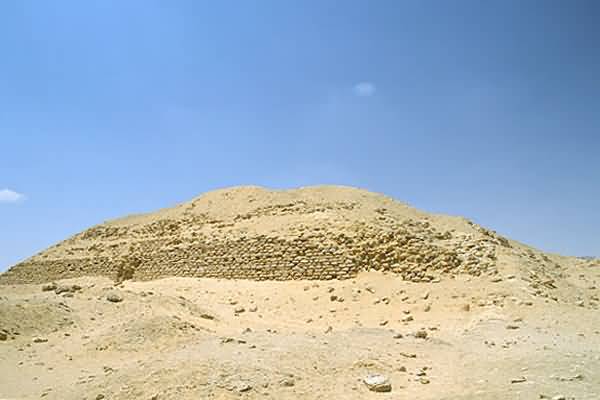 The Layer Pyramid known locally in Arabic as il-haram il-midawwar is a ruined step pyramid dating to the 3rd Dynasty of Egypt (2686 BC to 2613 BC) and located in the necropolis of Zawyet el’Aryan. Its ownership is uncertain and may be attributable to pharaoh Khaba. The pyramid architecture, however, is very similar to that of the Buried Pyramid of king Sekhemkhet and for this reason is firmly datable to the 3rd Dynasty. The Layer Pyramid lies close to the necropolis of Zawyet el’Aryan, 8 km south-west of Giza and 7 km  north of Saqqara.

The main structure is located on a rock ridge just above the floodplain. The layer pyramid is surrounded by a total of five cemeteries dating to the 1st Dynasty, 2nd Dynasty, late 3rd Dynasty, 18th Dynasty and Roman Period. Of these cemeteries, only the one dating to the late 3rd Dynasty contains large tombs, of which are four mud brick mastabas. A mortuary temple was built on the eastern side of the pyramid and a valley temple was possibly located several hundred metres from it. Nowadays, the pyramid is located within the confines of a restricted military area, barring modern excavations of the site. 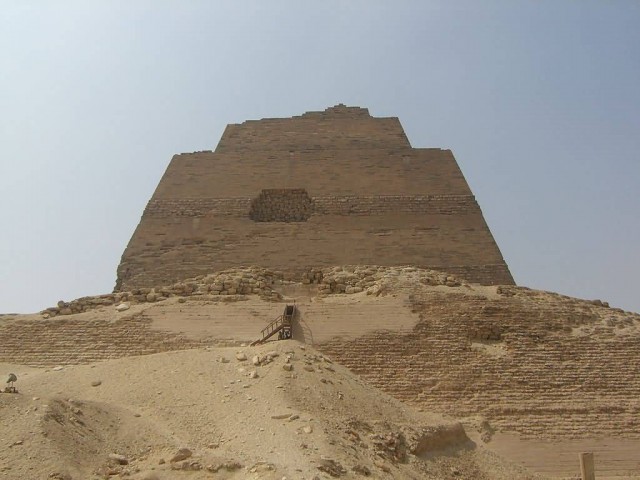 Meidum or Maidum is the location of a large pyramid and several large mud-brick mastabas. It is located about 62 miles south of modern Cairo. The pyramid at Meidum is thought to originally have been built for Huni, the last pharaoh of the Third Dynasty, and was continued by Sneferu. The architect was a successor to the famous Imhotep, the inventor of the stone built pyramid. The Meidum Pyramid was excavated by John Shae Perring in 1837, Lepsius in 1843 and then by Flinders Petrie later in the nineteenth century, who located the mortuary temple, facing to the east. 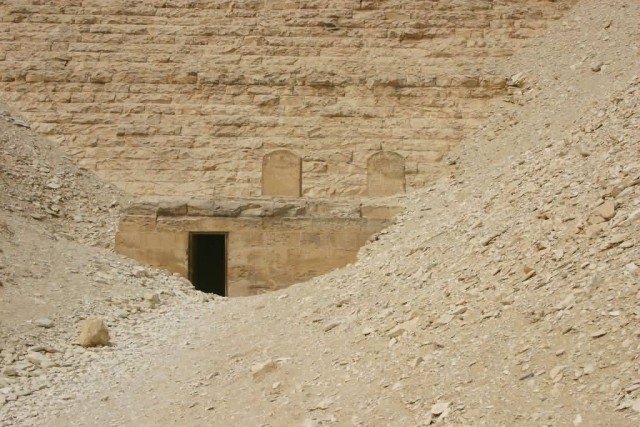 Located nearby is a mastaba of an unknown noble, the burial chamber of which can be entered via a robber’s tunnel. This tunnel is steep, extremely narrow and confined. Once traversed however, the chamber and hallway are relatively spacious and contain the first example of a red granite sarcophagus known in antiquity. Another mastaba is the Mastaba of Nefermaat. The stone sarcophagus remains within the unmarked and undecorated granite built chamber. The tunnel goes further on into the darkness  and as of 2002 remains unexplored. 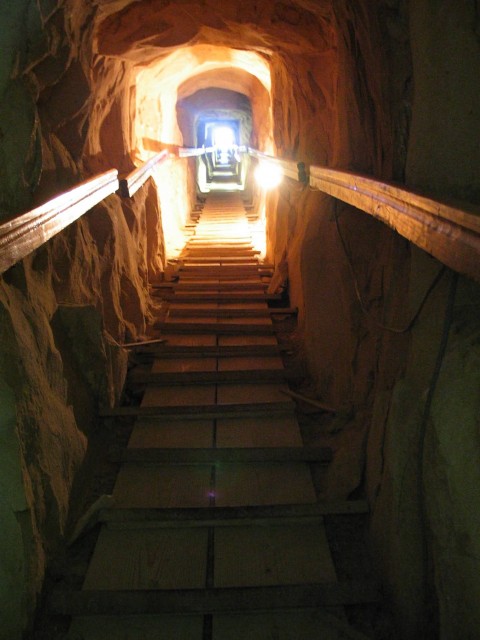 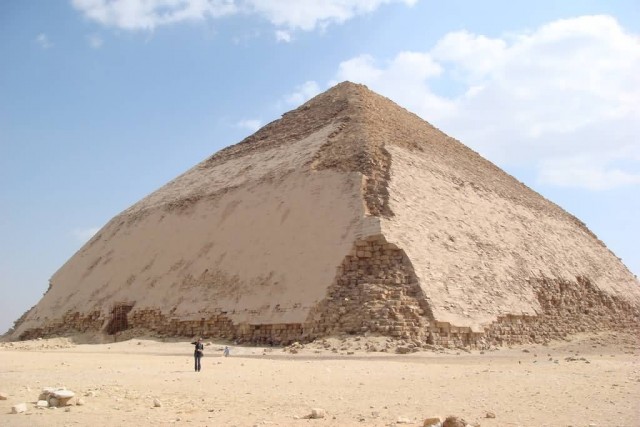 The Bent Pyramid is an ancient Egyptian pyramid located at the royal necropolis of Dahshur, approximately 40 kilometres south of Cairo, built under the Old Kingdom Pharaoh Sneferu. A unique example of early pyramid development in Egypt, this was the second pyramid built by Sneferu. The Bent Pyramid has two entrances, one fairly low down on the north side, to which a substantial wooden stairway has been built for the convenience of tourists though so far the pyramid is not open to the tourists, although plans have been proposed to open it. The second entrance is high on the west face of the pyramid. On the east side of the temple there are the fragmentary remains of the pyramid temple. Like the pyramid temple of the Meidum pyramid, there are two stelae behind the temple, though of these only stumps remain. There is no trace of inscription to be seen. The temple remains are fragmentary but it is presumed to be similar to that of the Meidum temple. It is also unique amongst the approximately ninety pyramids to be found in Egypt, in that its original polished limestone outer casing remains largely intact. British structural engineer Peter James attributes this to larger clearances between the parts of the casing than used in later pyramids. 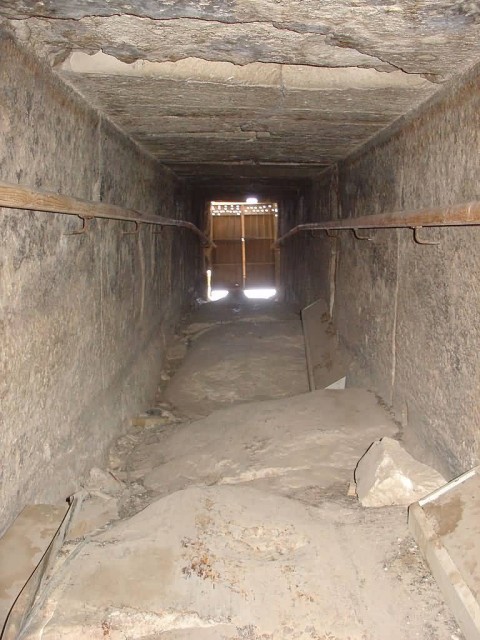 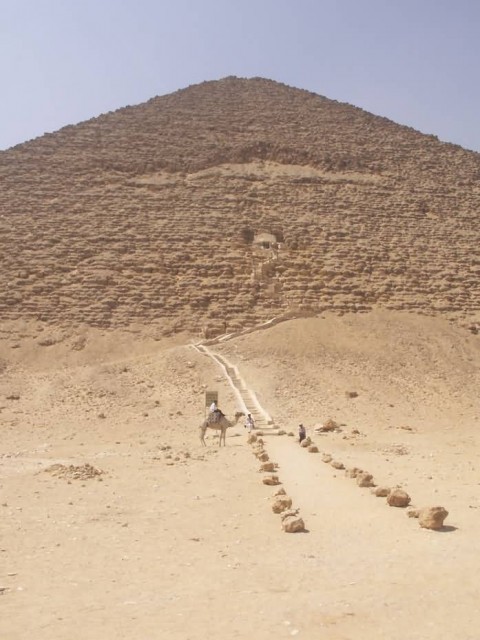 The Red Pyramid, also called the North Pyramid, is the largest of the three major pyramids located at the Dahshur necropolis. Named for the rusty reddish hue of its red limestone stones, it is also the third largest Egyptian pyramid, after those of Khufu and Khafra at Giza. It is located approximately one kilometer to the north of the Bent Pyramid. It is built at the same shallow 43 degree angle as the upper section of the Bent Pyramid, which gives it a noticeably squat appearance compared to other Egyptian pyramids of comparable scale. The Red Pyramid is 105 metres  high. A rare pyramidion, or capstone, for the Red Pyramid has been uncovered and reconstructed and is now on display at. The Red Pyramid, along with the Bent Pyramid, was closed to tourists for many years because of a nearby army camp. It is now usually open for tourists and a somewhat intrusive ventilation has been installed which pipes air down the entrance shaft to the interior chambers Dahshur. 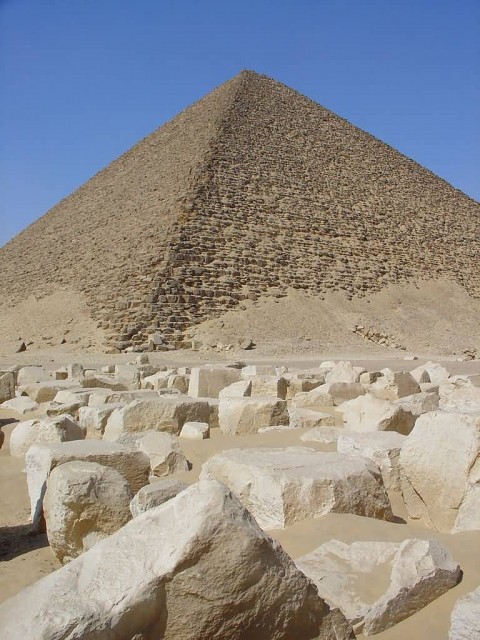