Lavani is a genre of music popular in Maharashtra. Lavani is a combination of traditional song and dance, which particularly performed to the beats of Dholki, a percussion instrument. Lavani is noted for its powerful rhythm. Lavani has contributed substantially to the development of Marathi folk theatre. In Maharashtra and southern Madhya Pradesh, it is performed by the female performers wearing nine-yard long saris. The songs are sung in a quick tempo. 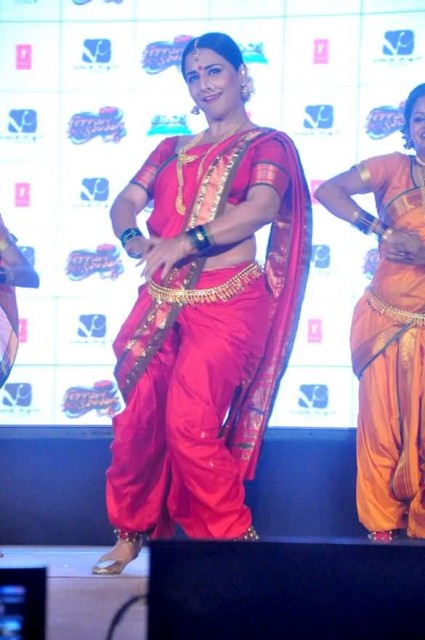 The ladies that perform lavani wear a long sari length around 9 metres. They form a bun with their hair. They wear heavy jewellery that includes necklace, earrings, payal, kamarpatta,bangles etc. They usually put a large bindi of dark red colour on their forehead. The sari they wear is called navvari.

The sari is Wrapped beautifully and is much more comfortable as compared to other sari types. There are also men that dance in lavni along with the ladies. They are the called nat usually the kinnars. These men dance in support with the lead dancer. Although beginnings of Lavani can be traced back to 1560s, it came into prominence during the later days of the Peshwa rule.

Honaji Bala introduced tabla in place of the traditional dholki. He also developed the baithakichi Lavani, a subgenre, which is presented by the singer in the seated position. Satyabhamabai Pandharpurkar and Yamunabai Waikar are the popular present day exponents of Lavani. Shringar Lavani is mostly sung and danced on the stage by a female and written by male.

Lavani can also be termed as a romantic song sung by lady who is waiting for her lover to accept her, who longs for his love. Many Lavani dancers are from some castes of Maharashtra like Mahar Kolhati and Matang. Marathi films played an important role in making Lavani genre accessible to masses. Movies such as Pinjara and Natarang not only attempted to blend traditional music with social messages but also helped portray Lavani world in positive light.