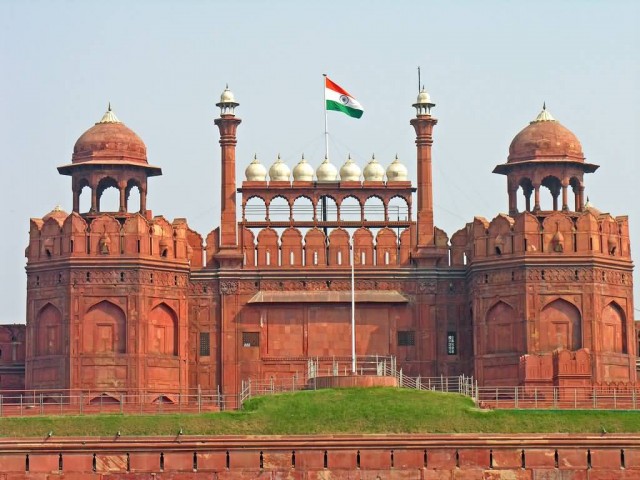 The Red Fort was the residence of the Mughal emperor of India for nearly 200 years, until 1857. It is located in the centre of Delhi and houses a number of museums. The Red Fort, constructed by Shah Jahan was built as the fortified palace of Shahjahanabad, capital of the fifth Mughal Emperor Shah Jahan in 1648 named for its massive enclosing walls of red sandstone. 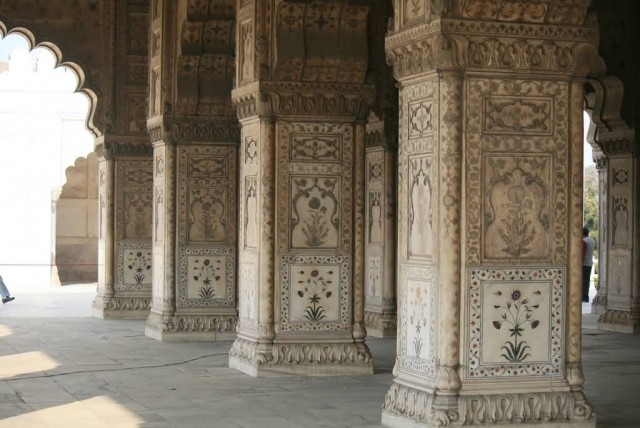 The Red Fort, the largest monument in Delhi is one of its most popular tourist destinations and attracts thousands of visitors every year. The Red Fort has an area of 254.67 acres enclosed by 2.41 kilometres of defensive walls, punctuated by turrets and bastions and varying in height from 18 metres  on the river side to 33 metres  on the city side. The Lahori Gate is the main gate to the Red Fort, named for its orientation towards the city of Lahore. The Delhi Gate is the southern public gate. 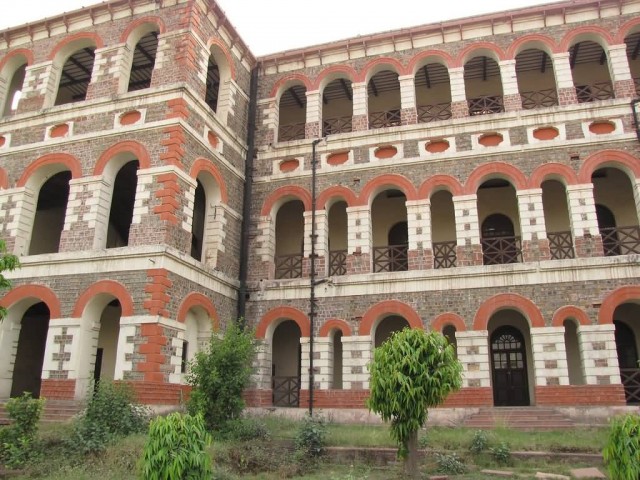 A minor gate, the Water Gate is at the southeastern end of the walls. It was formerly on the riverbank. The Diwan-i-Aamis is the public Audience Hall. The two southernmost pavilions of the palace are zenanas (women’s quarters), consisting of the Mumtaz Mahal and the larger Rang Mahal. The Mumtaz Mahal houses the Red Fort Archaeological Museum. The Red Fort is an iconic symbol of India. On the Independence Day of Indi, the Prime Minister of India hoists the national flag at the main gate of the fort and delivers a nationally-broadcast speech from its ramparts. 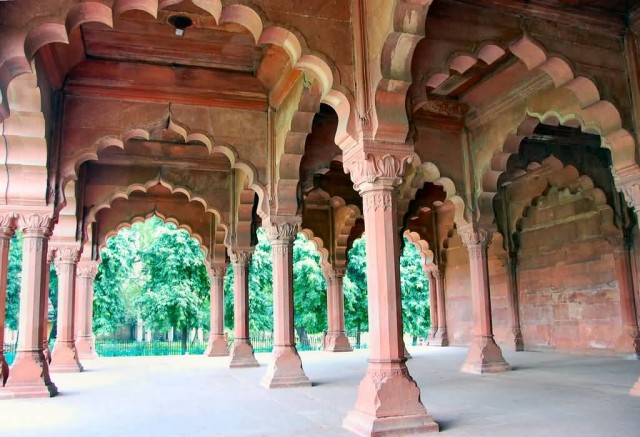 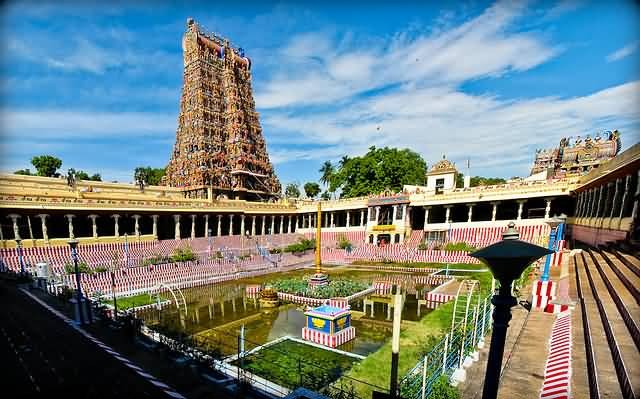 Meenakshi Amman Temple is a historic Hindu temple located on the southern bank of the Vaigai River in the temple city of Madurai, Tamil Nadu, India. It is dedicated to Parvati, known as Meenakshi and her consort, Shiva. The Meenakshi temple is believed to have been founded by Indra, king of Deva celestial deities. 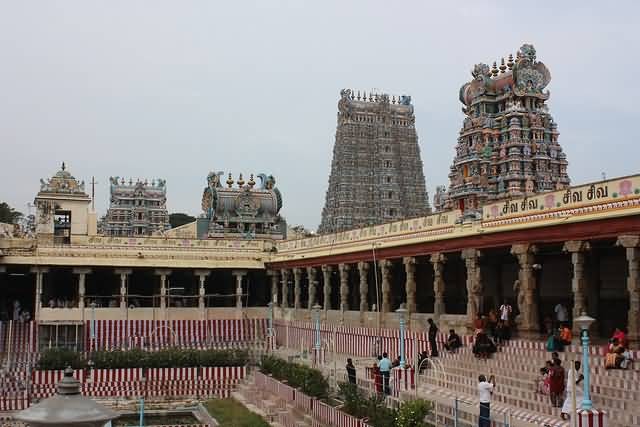 The temple is surrounded by gopurams. There are 14 gopuram the tallest of which, the famous southern tower, rises to over 170 ft and was built in 1559. The oldest gopuram is the eastern one, built by Maravarman Sundara Pandyan during 1216-1238. The corridor surrounding the sanctum of the Meenakshi is called kilikoondu Mandapam. The space was once used to keep green parrots that were trained to utter the name of Meenakshi. 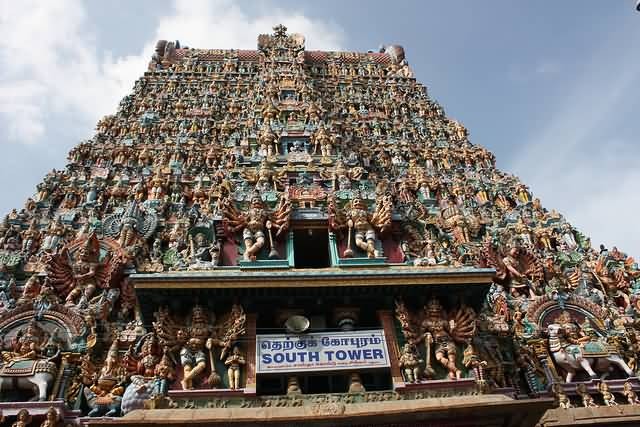 There are close to 50 priests in the temple who perform the during festivals and on a daily basis. Like other Shiva temples of Tamil Nadu, the priests belong to Shivaite to the Adishaivas, a Brahmin sub-caste. The most important festival associated with the temple is the “Meenakshi Thirukalyanam” (the divine marriage of Meenakshi) that is celebrated in April every year. The temple attracts 15,000 visitors a day, around 25,000 on Fridays and receives an annual revenue of sixty million Down the centuries, the temple has been a centre of education of Tamil culture, literature, art, music and dance. 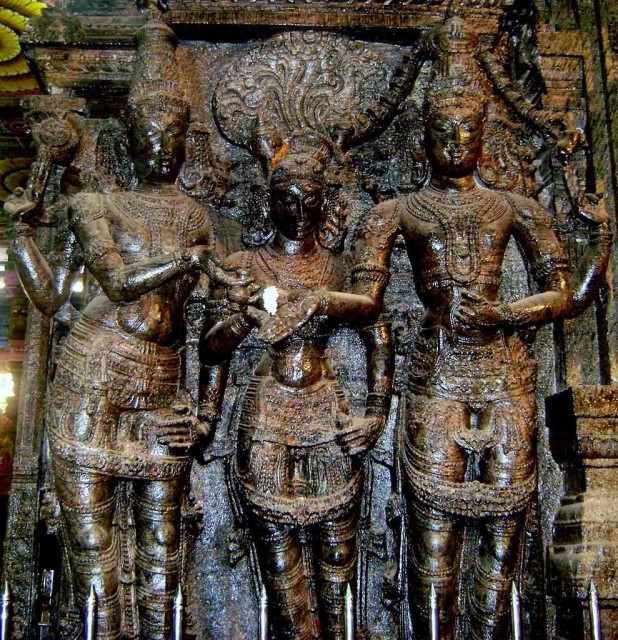 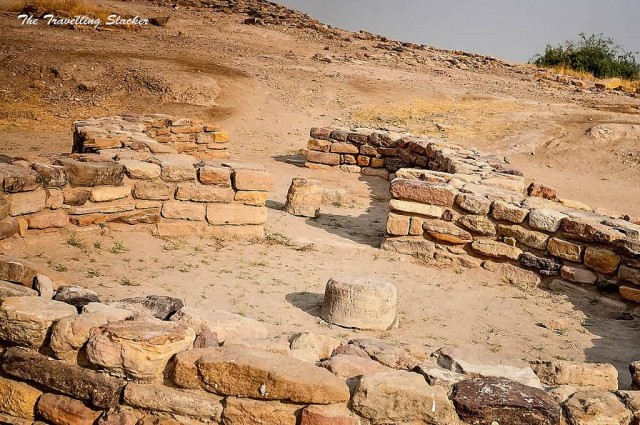 Dholavira is an archaeological site at Khadirbet in Bhachau Taluka of Kutch District, in the state of Gujarat in western India. One of the unique features of Dholavira is the sophisticated water conservation system of channels and reservoirs, the earliest found anywhere in the world built completely made of stone. The city had massive reservoirs, three of which are exposed. Recent work has revealed two large reservoirs, one to the east of the castle and one to its south, near the Annexe. 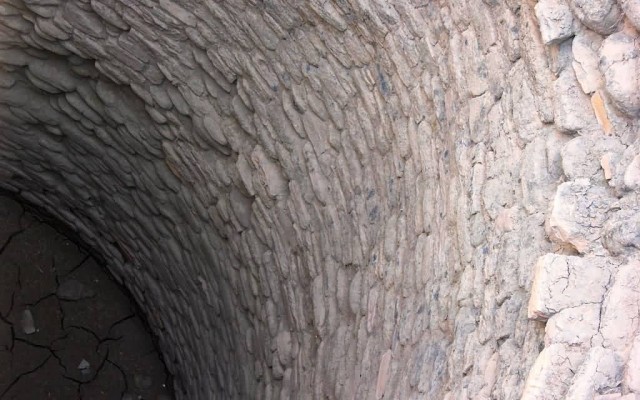 Excavation was initiated in 1989 by the Archaeological Survey of India under the direction of R. S. Bisht, and there were 13 field excavations between 1990 and 2005. The excavation brought to light the urban planning and architecture and unearthed large numbers of antiquities such as seals, beads, animal bones, gold, silver, terracotta ornaments, pottery and bronze vessels. In October 2014 excavation began on a rectangular stepwell which measured 73.4 m long, 29.3 m wide and 10 m deep, making it three times bigger than the Great bath of Mohenjedaro. 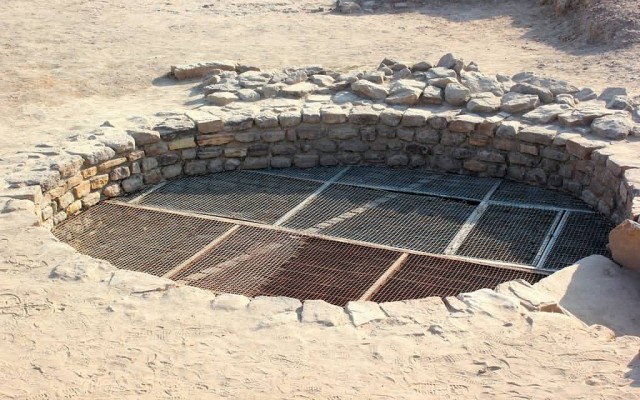 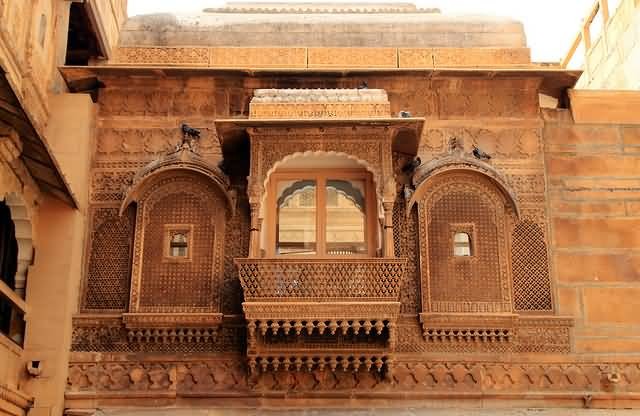 Jaisalmer Fort is one of the largest fortifications in the world. It is situated in the city of Jaisalmer, in the Indian state of Rajasthan. It was built in 1156 AD by the Rajput ruler Rawal Jaisal, from whom it derives its name. Major Attractions are Raj Mahal (Royal palace), Laxminath temple, 4 massive gateways, Merchant Havelis. The fort contains 3 layers of walls. The outer or the lower layer is made out of solid stone blocks and it reinforces the loose rubble of Trikuta Hill. The second or middle wall snakes around the fort. From the innermost or third wall, the Rajput warriors once hurled boiling oil and water as well as massive blocks of rock at their enemies, who would become entrapped between the second and third walls. 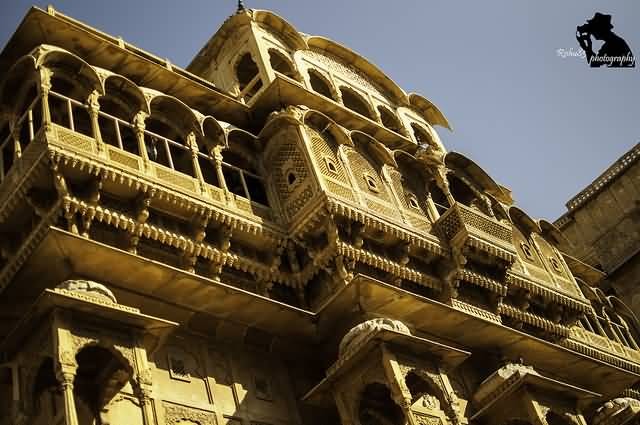 The fort has an ingenious drainage system called the ghut nali which allows for the easy drainage of rainwater away from the fort in all four directions of the fort. The fort has numerous eateries, including Italian, French and native cuisines. The fort stands amidst the sandy expanse of the great Thar Desert  on Trikuta Hill and has been the scene of many battles. In 2013, at the 37th session of the World Heritage Committee held in Phnom Penh, Cambodia, Jaisalmer Fort, along with 5 other forts of Rajasthan, was declared a UNESCO World Heritage Site under the group Hill Forts of Rajasthan. 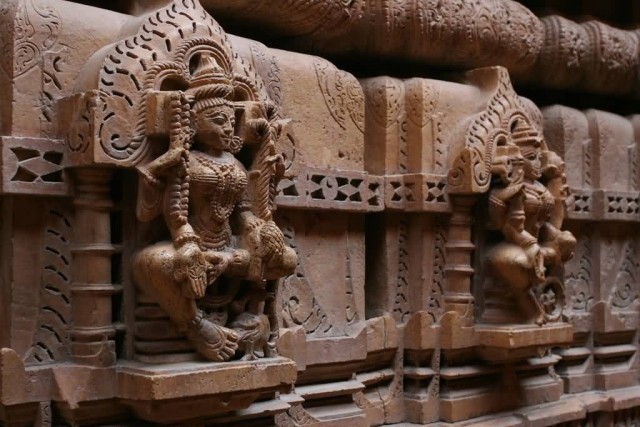 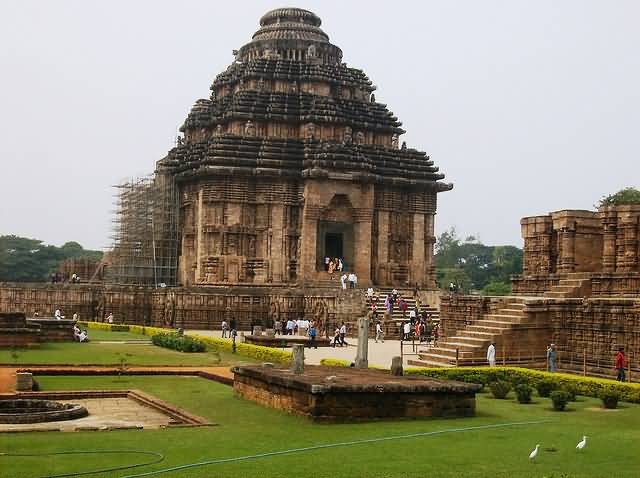 Konark Sun Temple  is a 13th-century Sun Temple , also known as the Black Pagoda at Konark, in Odisha, India. It is believed that the temple was built by king Narasimhadeva I of Eastern Ganga Dynasty around AD 1250. The name Konark derives from the combination of the Sanskrit words, Kona and Arka, in reference to the temple which was dedicated to the Sun god Surya. The temple was originally built at the mouth of the river Chandrabhaga. 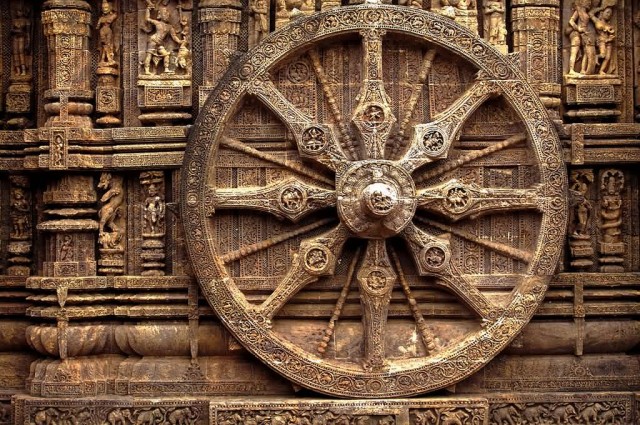 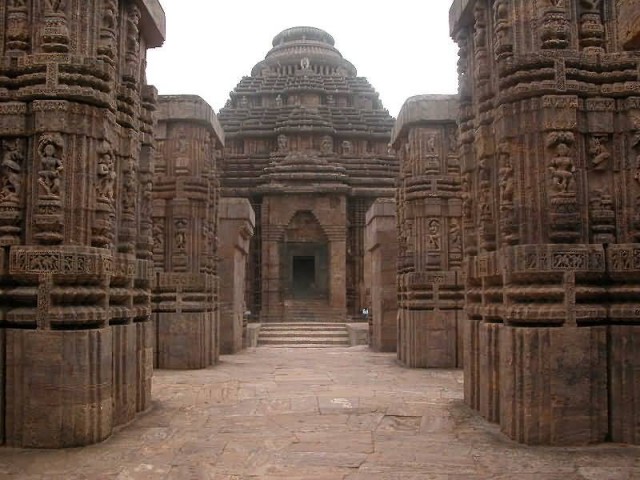 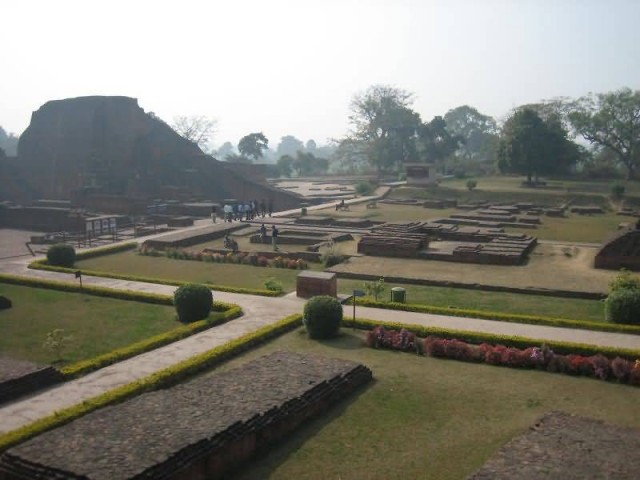 Nalanda was an acclaimed Mahāvihāra, a large Buddhist monastery in ancient Magadha, India. The site is located about 95 kilometres southeast of Patna near the city of Bihar Sharif and was a centre of learning from the fifth century CE to 1200 CE. 149 Historians often characterize Nalanda as a university. Nalanda University, also known as Nalanda International University is a newly established university located in Rajgir, near Nalanda, Bihar, India. 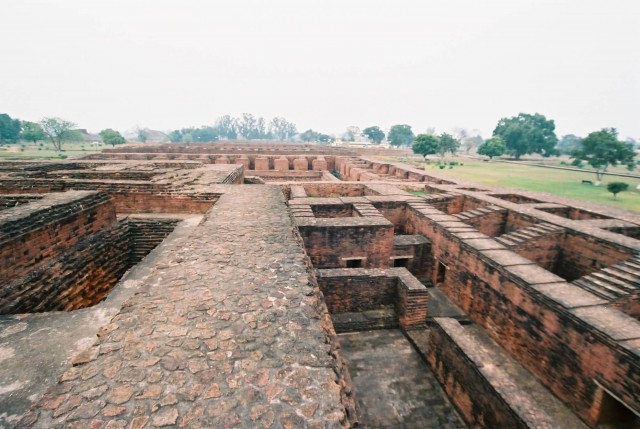 University was created as a revival of an ancient center of learning at Nalanda, began its first academic session on September 1, 2014 with 15 students including five women. Nalanda University is exclusively a post-graduate and doctoral school. Initially set up in temporary facilities in Rajgir, a modern campus is expected to be finished by 2020. 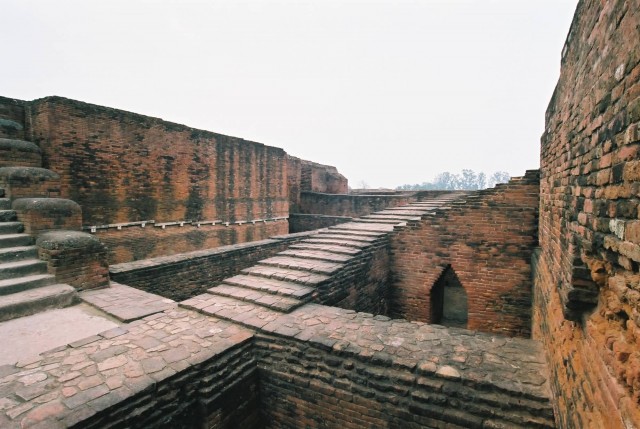 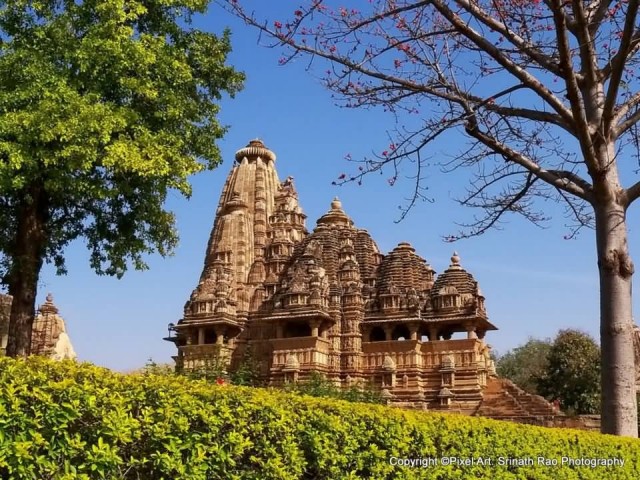 The Khajuraho Group of Monuments is a group of Hindu and Jain temples in Madhya Pradesh, India. About 175 kilometres  southeast of Jhansi. The temples are famous for their nagara-style architectural symbolism and their erotic sculpture. The Khajuraho group of monuments were built during the rule of Rajput Chandela dynasty. Local legends state that the temples had two golden date-palm trees as their gate. The temple site is within Vindhya mountain range in central India. The temples are clustered near water, another typical feature of Hindu temples. All temples, except one (Chaturbhuja) face sunrise, another symbolic feature that is predominant in Hindu temples. The Jain temples are located on southeast region of Khajuraho monuments. 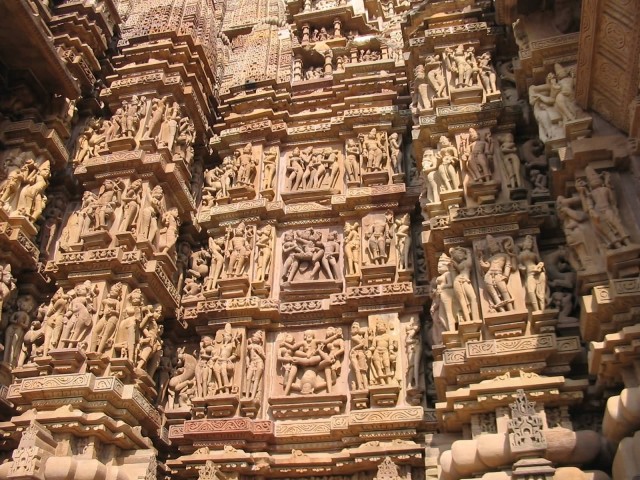 Khajuraho temples, like almost all Hindu temple designs, follow a grid geometrical design called vastu-purusha-mandala. This design plan has three important components – Mandala means circle, Purusha is universal essence at the core of Hindu tradition, while Vastu means the dwelling structure. The Khajuraho temples are made of sandstone, with a granite foundation. The Khajuraho Dance Festival is held every year in February. It features various classical Indian dances set against the backdrop of the Chitragupta or Vishwanath Temples. They are one of the UNESCO World Heritage Sites in India. 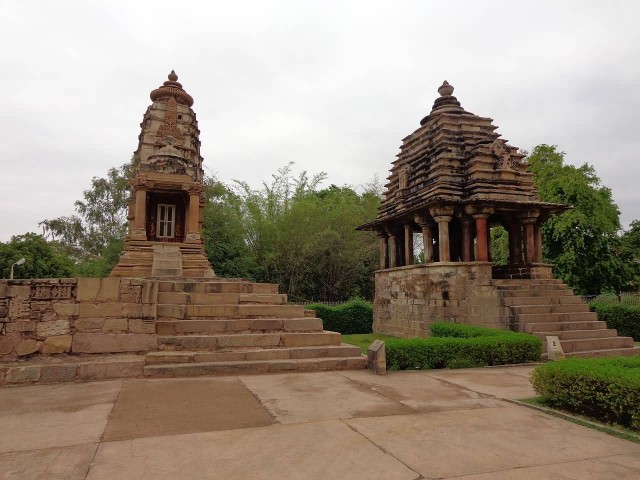